Introduction Theories in criminology tend to be unclear and lacking in justifiable broadness. The lack of clarity can sometimes end up in apparent inconsistencies, although more attention to the structure of a scientific theory and its requirements might reveal more agreement among theorists than now recognized. In fact, rarely do available theories offer guidance that does not require heroic leaps of conjecture. Practicality is not a requirement of a valid theory since theories might be void but still of use.

However, condition for a theory to be considered certifiable is none other than practicality.

Don't use plagiarized sources. Get your custom essay on
“ Subculture of violence theory by Marvin Wolfgang ”
Get custom paper
NEW! smart matching with writer

Theories of law breaking are the most common and essential in the field of Criminology. The questions that usually come out is “why do people commit crime? ” or “What makes countries more prone to crime than other? ” These theories serve as the guide of practice and a protocol to assist the implementation of law and reading of crimes (Vito, Maahs & Holmes, 2007 p.14).

Most of the time, the theories of criminology are used in order to explain the rationale behind the occurrences of a criminal act, which usually involve integration of various theoretical association.

Moreover, since, theoretical frameworks of criminology derive its composition primarily on psychological aspect, the understanding of human action; motives for action and rationale are very well identified.

Violence and culture have been related in the occurrence of crimes and although, the term subculture has been used by anthropologists and sociologists in a variety of ways and contexts, it still contains much of the ambiguity.

The theoretical framework of Subculture of Violence Theory requires delimitation of those sub-cultural values that are shared by a substantial proportion of a population (Wolfgang, 2001 p. 113). Discussion In 1983, Hawkins critiqued the subculture of violence theory, which is commonly used to explain homicide differentials between African Americans and whites.

Formulated by Marvin Wolfgang and Italian criminologist Franco Ferracuti, the theory is based primarily on data from an earlier Wolfgang study and homicide research concluded in Italy by Ferracuti. Drawing on the results of past studied and their own research findings, Wolfgang and Ferracauti formulated the “subculture of violence” theory. As for the focus of their theory, Wolfgang and Ferracauti (1967) state, “Our major concern is with the bulk of homicides-the passion crimes, the violent slayings-that are not premeditated and are not psychotic manifestations” (Greene and Gabbidon, 2000 p.133).

Most subculture of violence theorists have focused on explaining the northern-southern differentials in homicides rather than black-white differentials. Wolfgang and Ferracuti based their theory of a subculture of violence on a sociological theory of culture involving such concepts as culture conflict, differential association, and the value system; on a psychological theory of learning with concepts of conditioning, developmental socialization, and differential identification: and on criminological research on criminal homicide (Smith and Berlin, 1998 p.268).

Sub-cultural theoretical framework that involves the occurrence of violence depicts its origination in the scope of cultural assimilations and culture-behavioral pattern formation. The theory is the combination of various perspectives ranging from cultural, behavioral, and sociological background that incorporates the origin of individuals. The conceptual framework of Wolfgang and Ferracuti has been assimilated to various cultural frameworks; however, the theory still obtained various criticisms from critics.

Subculture of violence theory by Marvin Wolfgang. (2017, May 14). Retrieved from http://studymoose.com/subculture-of-violence-theory-by-marvin-wolfgang-essay 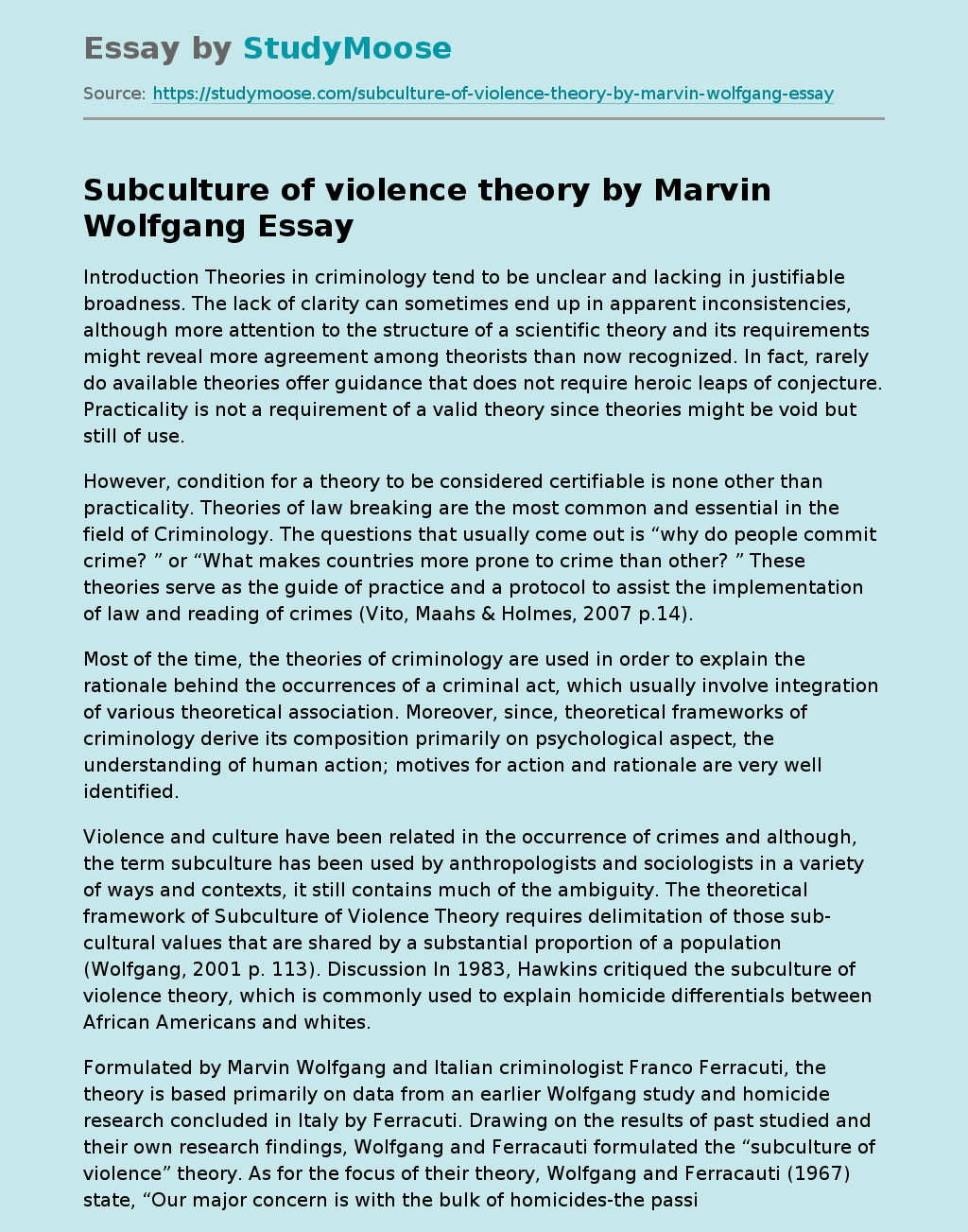