Starting a friendship is not always easy, especially for two completely different people. In the novel For Whom the Bell Tolls, Ernest Hemingway shows how one of such friendships happens. Robert Jordan, an American volunteer sent behind the fascist lines of war torn Spain, and Pablo, a once brave leader of a republic guerrilla group, have nothing in common other than the side they are fighting on and their common goal of blowing up a strategic bridge. Hemingway portrays how these two characters, after a rough and hostile relationship, finally become friends.

Don't use plagiarized sources. Get your custom essay on
“ A study of a relationship in Ernest Hemingway’s For Whom the Bell Tolls ”
Get custom paper
NEW! smart matching with writer

Like every other relationship, the moment the two characters meet is crucial. When Jordan meets Pablo for the first time, they are not friendly at all. They give each other a very bad first impression. Jordan ‘did not like the look of this man…'(Chapter 1 P.13). Here, Hemingway establishes early in the novel that these two characters will not get along well. Their meeting is also more like an interrogation than a first meeting of two potential colleagues.

Pablo dominates by asking all the questions and demanding answers:

“That is my business.”

In a way, Jordan is opposing Pablo by refusing to give him information, but Pablo stays in power. He uses his identity as a part of his guerilla group to show his supremacy. Pablo also has a way of going against Jordan, ‘What right have you, a foreigner, to come to me and tell me what I must do?’ (Chapter 1, P.

18). Again, he uses his advantage of being part of the group, and not a ‘foreigner’. Now that both sides are opposing each other, their relationship develops into a hostile one.

Their first real clash is when Pilar, Pablo’s wife, shifts her loyalty to Jordan. As Pablo, in the light of protecting himself, objects to Jordan’s plan to blow up the bridge, ‘”I am for the bridge and against thee [Pablo],” the wife of Pablo said.’ (Chapter 4 P.54). Since Pilar supports Jordan, she is a symbol of Jordan. As she is against Pablo, she represents Jordan to oppose Pablo. She is also the true leader of the guerilla group, as she later takes command:

‘”[Pilar:] You understand who commands here?”

The rest of the guerilla group despise Pablo’s cowardice and agrees to Pilar taking command. Jordan and Pablo are fighting for leadership, and as Pilar seizes it, Jordan wins. The adversity increases.

Although Pablo is afraid of what consequences blowing up the bridge might bring to him, he knows the danger of upsetting Jordan and the guerilla group. As the hostility between him and the rest of the group increases, he quickly switches sides: ‘”I am with thee now.”‘ (Chapter 17 P.213). He even offers to help Jordan and the group to escape after this of the bridge. This shows that Pablo is sly. First he threatens to stop Jordan’s mission. As he senses the danger in this, he quickly turns back and makes friends, before he gets himself killed. Jordan describes his relationship with Pablo as ‘like a merry-go-round’:

Hemingway uses this ‘wheel’ to show a cycle of loyalties, of friendship. Pablo turns against Jordan, and then returns ‘back to where it starts’. Jordan is at the start, as Pablo befriends him. The merry-go-round is turning again, and he knows it: ‘Keep off the wheel, he told himself.’ (Chapter 18 P.217). Pablo is trying to pick another fight with Jordan, but Jordan is not budging. Jordan is monitoring the actions of Pablo, and finds that he may be smarter than he seems. He knows getting on this wheel will not solve anything.

Being a coward as he is, Pablo runs away and attempts to stop the mission by destroying the explosive detonators, and protects himself from being hunted down by fascists. The merry-go-round has started turning. Pablo does return, saying he got lonely, bringing along with him some reinforcements. Jordan ‘felt increasingly better’ (Chapter 39 P.369) as he saw him:

‘Seeing Pablo again had broken the pattern of tragedy into which the whole operation seemed grooved…’ (Chapter 39 P.369).

Now he knows that Pablo is willing to help blow up the bridge. They know they need each other. They know that it is useless to go in opposition to each other. As a group, they stand a chance on this mission. During a discussion between Jordan, Pablo and Pilar, Pilar says ‘”I believe if we must finish we must finish together”‘ (Chapter38 P.366). Keeping this in mind, Pablo and Jordan work together as partners.

The last conversation of Jordan and Pablo is short, but shows how they have become friends. Pablo shows his care for Jordan, as he saw his broken leg, asking simply ‘”Does it hurt much?”‘ (Chapter 43 P.434). This may seem to be quite normal to ask, but it is a milestone for two former adversaries. With full confidence, Jordan then puts his girlfriend in the care of Pablo: ‘When I say to take her, take her.’ (Chapter43 P.433). Jordan trusts Pablo very much.

Hemingway has shown that friendship is important, and it gets things done. How Robert Jordan and Pablo’s friendship allow them to destroy the bridges proves this. Their desire to complete a task brings them together. They were once enemies, now friends. Though they may sometimes have disagreements, they will always end up as friends. Though the merry-go-round may turn once more, it will always go back to where it starts.

A study of a relationship in Ernest Hemingway's For Whom the Bell Tolls. (2020, Jun 02). Retrieved from http://studymoose.com/study-relationship-ernest-hemingways-bell-tolls-new-essay 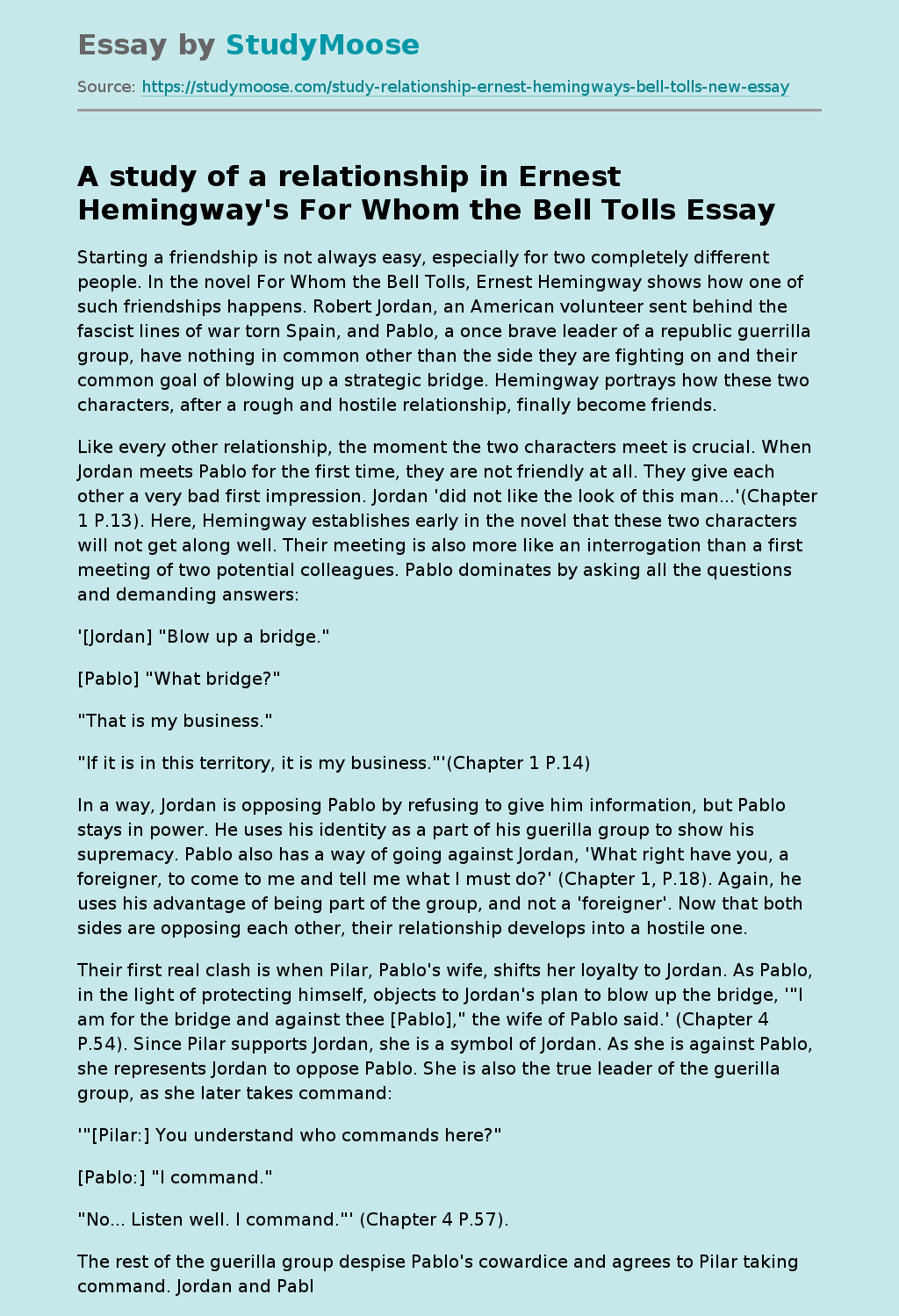