10. How does Huck know his father has returned? – On his way home, Huck noticed that there were boot tracks in the snow; these tracks were unique in that one has the shape of nails. 11. What does Huck do with his money? Why? – He gave it to Judge Thatcher, so he won’t have to with it with Pap. 12. Why do the Widow Douglas and Judge Thatcher fail in their petition to become Huck’s guardians? -They fail because the judge doesn’t want to separate the families and his father came back 13.

Don't use plagiarized sources. Get your custom essay on
“ Study Guide for Adventures of Huckleberry Finn ”
Get custom paper
NEW! smart matching with writer

How does Huck escape his father? -One day Huck went out and found a canoe and hid it in the woods.

Another day, when his dad was gone, Huck finishes sawing open a whole in a wall in the back of the cabin that he has started sawing some days earlier. When he completed, he gathered supplies and food to the canoe. He also came up with a master plan to make it seem like he got murdered by killing a pig, and messing up the cabin with an ax.

He then went to this canoe and slept, and the next day he rowed out to Jackson’s Island. 14. How does Twain satirize ‘do-gooders’ in his description of Pap’s “reform? ” How is the new judge different than Thatcher and the Widow Douglas?

-Twain mocks ‘do-gooders’ because whenever Pap said he was sorry and would change, they automatically thought he would change and believed him. However, Pap never kept his word and continued getting drunk and beating Huck.

The new judge is different because he is new to the town and doesn’t know the relationship between Huck and his father, if he did, he probably would have separated Huck from his father. 15. How does Huck like life with his father? Why does he run away? -He liked living with his father because he didn’t have to do chores.

He runs away because he is tired of always being locked up in that house, and he is afraid of always being locked up. 16. How does the physical description of Huck’s father in Chapter 5 also serve to describe his character? -Huck’s father’s appearance shows that he has no job and is obviously a drunk. He doesn’t seem to be taking care of himself very well and is just a complete mess. His face and his clothes are both a complete disaster. He is basically a loser and useless. 17. What does Huck’s father criticize about the government? What does Twain want the reader to feel about these issues?

–I would characterize Jim’s predictions in these chapters superstitious, and not quite believable. The reader does sense which ones will come true and which one will not depending on how Jim repeats them. Like the one about the birds and the rain, Jim mentioned and repeated that one many times making the reader [me] believe that it will rain. However, other predictions like how hairy chests and arms mean that you will become rich is not so believable. 18. Why does Huck think about Tom when he is working out his escape? -Since Tom’s imagination is so big, Huck knows that Tom will be interested in making the fake murder seem more realistic. 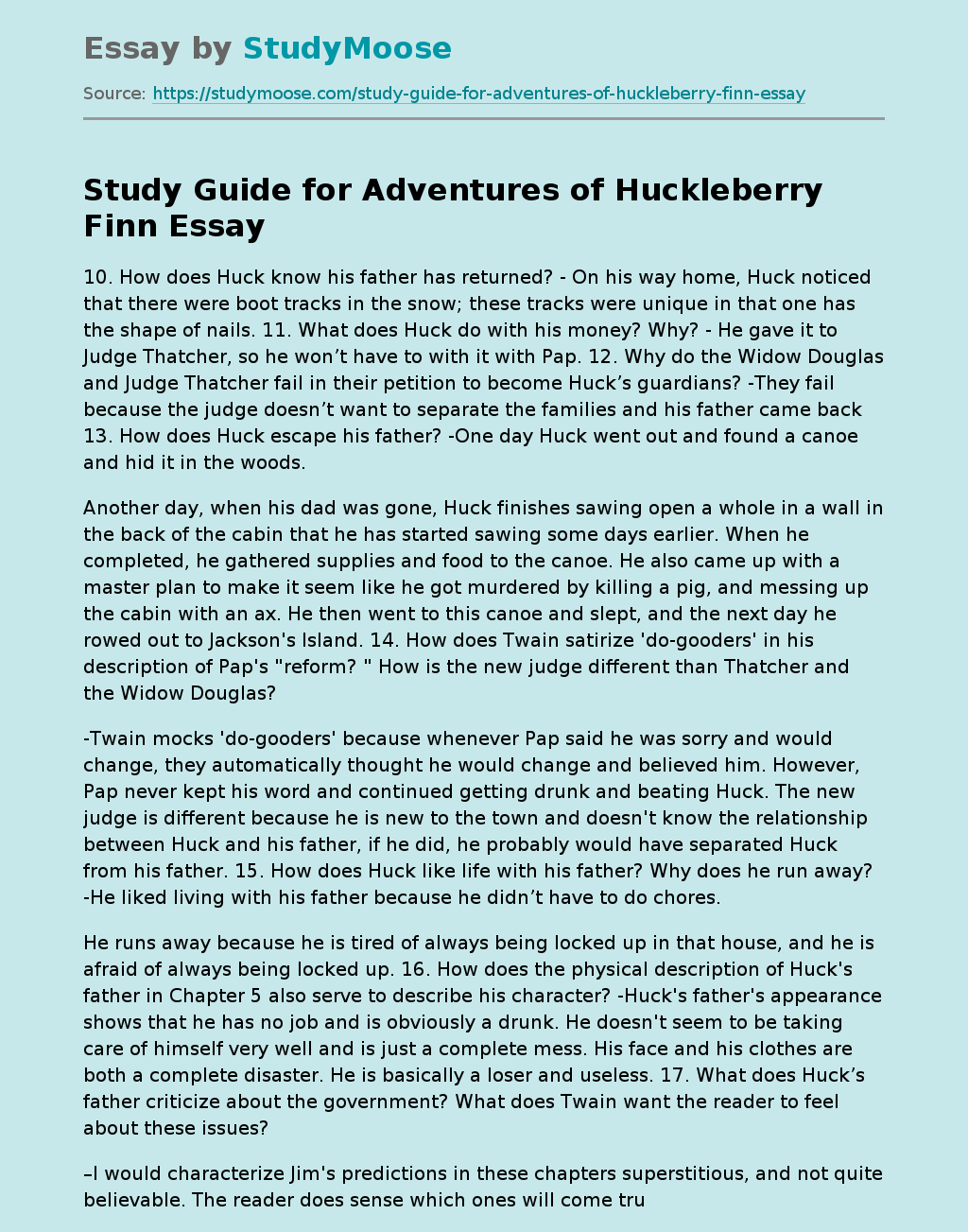