At the beginning of the novel it takes us through the daily routine of Ben Richards. It shows just how bleak his life is and begins to show us the divide between the rich and the poor. Richards explains that “every development had”(1) a free-vee and that “it was the law”(1) which shows that the games network is almost forcing their own idea of acceptable which is forcing their society to adapt to it. It explains the troubles that Richards is facing and becomes clear that there is no help for him.

Don't use plagiarized sources. Get your custom essay on
“ Stephen King, The Running Man ”
Get custom paper
NEW! smart matching with writer

This helps to develop the theme that society is largely divided and not only by rich and poor but also by black and white. He develops his theme by showing Richards point of view which gives us some insight on why society is so largely divided. Richards is showing watching a television show which is called “Treadmill to Bucks” which is a game where people with lung diseases must run on a treadmill.

As it explains in the book “they accept only chronic heart, liver, or lung patients”(2).

This concludes the point that in King’s version of the future the rich become richer and the poor only become ridiculed and must work for their money. King develops his theme by using Richards humor and sarcastic remarks towards the games company workers such as when he tells the nurse “Take a shower, kid. You done good.”(32). This shows his distaste for the society they live in and how the games company controls everything.

Richards meets a man named Jimmy Laughlin and begins to realize that it is not only him facing these problems and starts to see that there are plenty of people going through the daily struggle of life. Richards relates with this man because they are both lower class people fighting for their lives which once again relates back to the divide in society. As they introduce the Running Man to Richards I began to realize that this game show takes lower class people who need the money and show them as criminals just for entertainment purposes. This showed me that society really can control how people think and can screw you over if you don’t have money which represents both themes which would be that society is the strongest character and that society is largely divided. As those are the two most noticeable themes in the book there is another one that appears to me and that is there will always be hurdles in life but you will always overcome them. This theme begins to emerge as Richards explains his life to us by saying his wife is a prostitute and that his daughter has a fatal illness while he remains jobless and the family remains poor.

In this section of the novel Richards begins his run and starts to fend for his life. When Richards is introduced to the audience the concept of society being the strongest character in the novel is very apparent. It becomes noticeable when these people have no idea who Richards is but yet they boo him because the games network said he was a bad person. In the novel the audience members say things like “Get out you creep!”(70) and “Kill him!”(70). By seeing this behavior you can see that society controls everything that goes on. Next Richards meets a young boy named Stacey who is a poor boy who is roaming the streets late at night. When this happens the development of the theme that society is so largely divided in many aspects because it shows yet another poor family who are struggling.

As it says Stacey is “eight in March”(119) and he is asking Richards to “toke up”(119) which proves that this boy is very uneducated and on the wrong path much like the other poor kids in the neighborhood. Another of example of society being the strongest character in the book is when Bradley see’s Richards and asks him if he is “that guy on the free-vee”(121) and quickly judges him in the wrong light by saying he “fried five cops”(121). This proves that even the poorest of folk can get to know who Richards is just by talking with other people and will want to kill him.

In this section Richards meets Bradley and his family which proves to be a great help to him in his journey. Bradley reveals to Richards that the air in the city is very bad for your health and that nose plugs are so expensive that only the wealthy can buy them. This delves back into the idea that the society is so largely divided and that there is no chance for the people on the lower end of the society. As Bradley explains to Richards “the free-vee is killing us”(132) and by this he means that the games network is slowly killing them by not telling them the truth. This relates back to the idea that society controls everything and this case society is the games network.

As Richards flashes us back to his life he concludes that his life was one uphill climb as he explains the comments people made about him some of which included things like “Can you believe he was a wiper for sic years and knocked her up?”(157). In my opinion this brings us back to the more central theme that in life you will face hurdles and I think it’s a good theme for King to use because everyone can relate to it. Next Bradley tells Richards that Laughlin who is the other contestant has been caught and killed and Bradley explains to him that the “kids, Bobby and Mary Cowles”(159) were seen “grinning broadly into the camera”(159). I think King has put this in because it shows that there are no values in this future and if society deems it as okay then it is okay which just shows that society always prevails in this novel.

In this next part Richards hijacks a car from a lady named Amelia Williams who is from a higher social class than most of the people that he has run into. When Richards gets into the car with Amelia she quickly judges him and asks him “Will you rape me”(202) and continues to be frightened even though Richards repeatedly says to her “I have no intention of harming you”(202). I compared Amelia and Bradley in my mind and related it to the theme that there is a large divide between rich and poor and white and black and soon realized that an aspect as simple as grammar can be a huge difference between the two. It shows that the government only cares about educating the wealthy and does not care about the poor and only uses them for entertainment.

Richards begins to conjure up a plan and soon comes up with one as he says “There will be a dozen free lance cameramen around in no time”(208). In my opinion he does this because he knows that they will not kill his hostage who is a wealthy lady and who is recognized in the community as a “good” person. He knows that if the community finds out that the games company is corrupt they will turn against them and since society is so strong in this future everyone will turn against the company. King develops the theme through the thoughts and actions of Richards because he shows how Richards always brings the society into the equation. In my opinion Richards used the divide in society to his advantage because he used the poor people or as he would call them his people to help him and then used the rich people as victims. Richards explains to Amelia that he had seen “a little girl five years old with lung cancer”(206) and tries to tell her that the “network is killing millions of people”(206). But Amelia does not listen and tells him “you talk dirty”(206) which exaggerates the powerfulness of society in this game and that they can convince anyone that this man is bad and always will be.

In the final 64 pages Richards is on the verge of completing the game and getting the money but is offered up a deal from Killian who at the head of the games company. As the book comes to an end Richards is almost done his adventure and has earned a lot of money for his family. This can relate back to the universal theme of overcoming hurdles because technically he has overcame a hurdle for his family in the financial area. Killian tells Richards that his “wife and daughter are dead”(290) and that his wife was “stabbed over 60 times”(294). I think King put this in the book because it shows once again that society is so powerful because it made a person who doesn’t even know Richards wife or daughter want to kill them just because society says it is right to.

A question I asked myself about this running man game is that if you do succeed how will you ever be able to adapt to society without being looked at as a criminal because that is how society see’s you now. It is almost inevitable that once you start this game you will die no matter how many times you evade death. In the end Richards crashes the plane into the games company building and takes Killian along with him and while he is doing this he is “giving him the finger”(317) and “grinning”(317). I think that King was trying to prove that society was a force that Richards could not handle and a force that he never would be able to handle and so it ended up beating him. King developed the theme nicely in my opinion and putting Richards point of view throughout the whole story helped me grasp the power of society in the book. 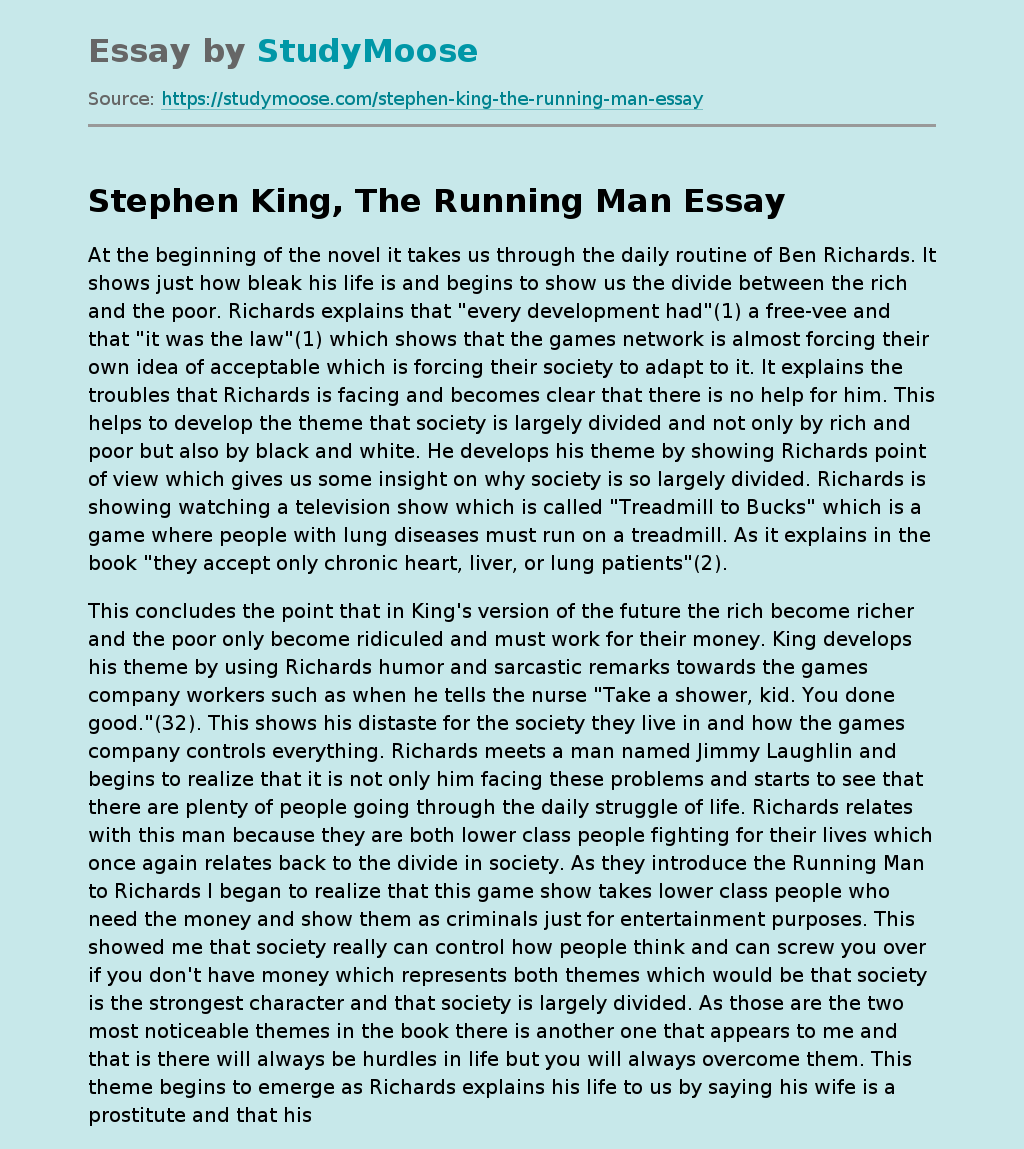