The United States has one of the most complicated forms of government in the world. With many levels and subdivisions, this form of government is called federalism. Within the United States, federalism is marked by a continuous change in the system of connections between the national, state, and local governments. At times, the different levels of government act independently and at other times, the levels became so entangled that it becomes impossible to tell apart the responsibilities of one from the other.

Don't use plagiarized sources. Get your custom essay on
“ State and Local Government ”
Get custom paper
NEW! smart matching with writer

Federalism is just one of the three main systems of power used by the United States.

However, for some years now, federalism has been linked with the concept of devolution. Devolution is the process of powers and responsibilities being taken from the national government and given to the state governments, which clearly goes against the “independent equals” idea in federalism because states are gaining more power. This could be a result of the states abusing their power of experimenting with policy. Although states might abuse their power of experimenting, the actual practice of experimenting is considered an advantage.

Experimenting is one of the many advantages of federalism. Federalism allows for flexibility among state laws and institutions as well as reduces complications because the states are able to accommodate citizens’ interests, which is shown by how much easier trade is now. Another advantage of federalism is that it enables the achievement of national goals, which is shown when the goal of creating an interstate highway system was achieved in the 1950s. Although federalism is full of advantages, it comes with a price.

Unfortunately, federalism increases complexity and confusion, which could be a great inconvenience for people. Federalism can cause confusion between state and federal governments because of the vagueness of the exact division of powers among them. Federalism promotes the duplication of efforts and the reduction of accountability. It also makes it difficult to coordinate, which is shown when police or fire departments in different cities or states can’t communicate with each other. This was clearly shown during the Three Mile Island accident that almost caused a huge catastrophe. Another drawback would be that federalism creates inequality in services and policies. Federalism is not a perfect ideal, but rather it plays host to a balance of both advantageous and disadvantageous outcomes.

The Federal Emergency Management Agency, also known as FEMA, is a classic example of how federalism shapes policy. In trying to aid in the relief for hurricane Katrina, FEMA was unsuccessful in their efforts. They were not able to communicate with state and local governments and coordinate procedures in providing relief. However, during hurricane Sandy, FEMA provided great help and relief for people because they were able to efficiently communicate and coordinate proper procedures. This shows how coordination can go from bad to good because of the resiliency of FEMA in federalism.

Concurrent powers are powers that are shared by both the federal and state governments. The right to tax, borrow, and spend are all powers that can be exercised by the federal and state governments. Implied powers are another set of powers given to the federal government through the Constitution. These powers are broad, but undefined, powers that were essentially created on the idea that not all powers could possibly be listed to meet the needs of the developing nation. These include the general welfare clause, the necessary and proper clause, and the interstate commerce clause. The general welfare clause gives Congress the authority to provide for the “general welfare”.

The necessary and proper clause gives Congress the right to pass any law that they think is “necessary and proper” to help in carrying out the responsibilities of the federal government as they are defined in the Constitution. The interstate commerce clause gives Congress the right to regulate interstate commerce. These clauses have been broadly interpreted which, in result, has been giving Congress more and more implied powers.

While the Constitution has been shifting more power into the hands of Congress, there isn’t much stated for the state governments. It does, however, state the full faith and credit clause. This clause requires that states recognize each other’s public records and acts, meaning that contract, wills, and marriages that are valid in one state are all valid in all other states. In essence, this clause is the financial backbone of state and local government. Another clause that was stated in the Constitution for state purposes is the privileges and immunities clause. Under this clause, states are prohibited from discriminating against the citizens of other states.

The Bill of Rights was also something put into the Constitution to promote individual and state rights by limiting the power of the federal government. The Tenth Amendment addresses the power of the states. It guarantees a broad and undefined set of powers be reserved for only the states and people. The Fourteenth Amendment also deals with specifying the powers of states. This amendment makes it so that the states cannot deprive individuals of the rights and privileges of citizenship and it also requires states to provide due process and equal protection guarantees. The Constitutional basis for federalism in the United States is a big part of its government.

Whoever advocates states’ rights believes that states should be able to make their own decisions without any interference from the federal government. The compact theory is the idea that the Constitution represents an agreement among the sovereign states to form a common government. It took the practice of nullification to an extreme back during the 1820s and 1830s. Eventually, national policies kept upsetting the southern states in the U.S. and that led to secession arguments. The concept that it is impossible for state and federal governments to have different and separate jurisdictions and that both those federal and state governments must work together is called cooperative federalism. Cooperative Federalism comes in different forms as well.

The federal government supplies many different forms of grants-in-aid. The first form is a categorical grant, which is money given for specific programs, leaving the state and local governments with little discretion on how to spend it. The second form of a grant-in-aid is a general revenue sharing grant. These grants come with few constraints and they leave the state or locality with almost complete discretion over how they want to spend the money. All grants given by the federal government come with constraints crosscutting requirements.

Crossover sanctions are federal requirements that mandate the grant recipients to pass and implement certain laws or principles as a condition of receiving the fund. Sometimes the federal government issues action-requiring direct orders to the states and localities but don’t provide any financial support for that action. These orders are called unfunded mandates. These grants have all helped in shifting power from the state governments to the federal governments, but there has been a new form of federalism that has been shifting power back to the state governments.

To sum things up, federalism cannot be described in one single sentence. Federalism has its ins, outs, ups, downs, and can be all over the place. Federalism’s many forms are what make this system of government unique and different from the others. It has taken the United States into some fortunate and some not-so-fortunate times. It is a complicated concept that will continue to change as the United States advances even further into the future. 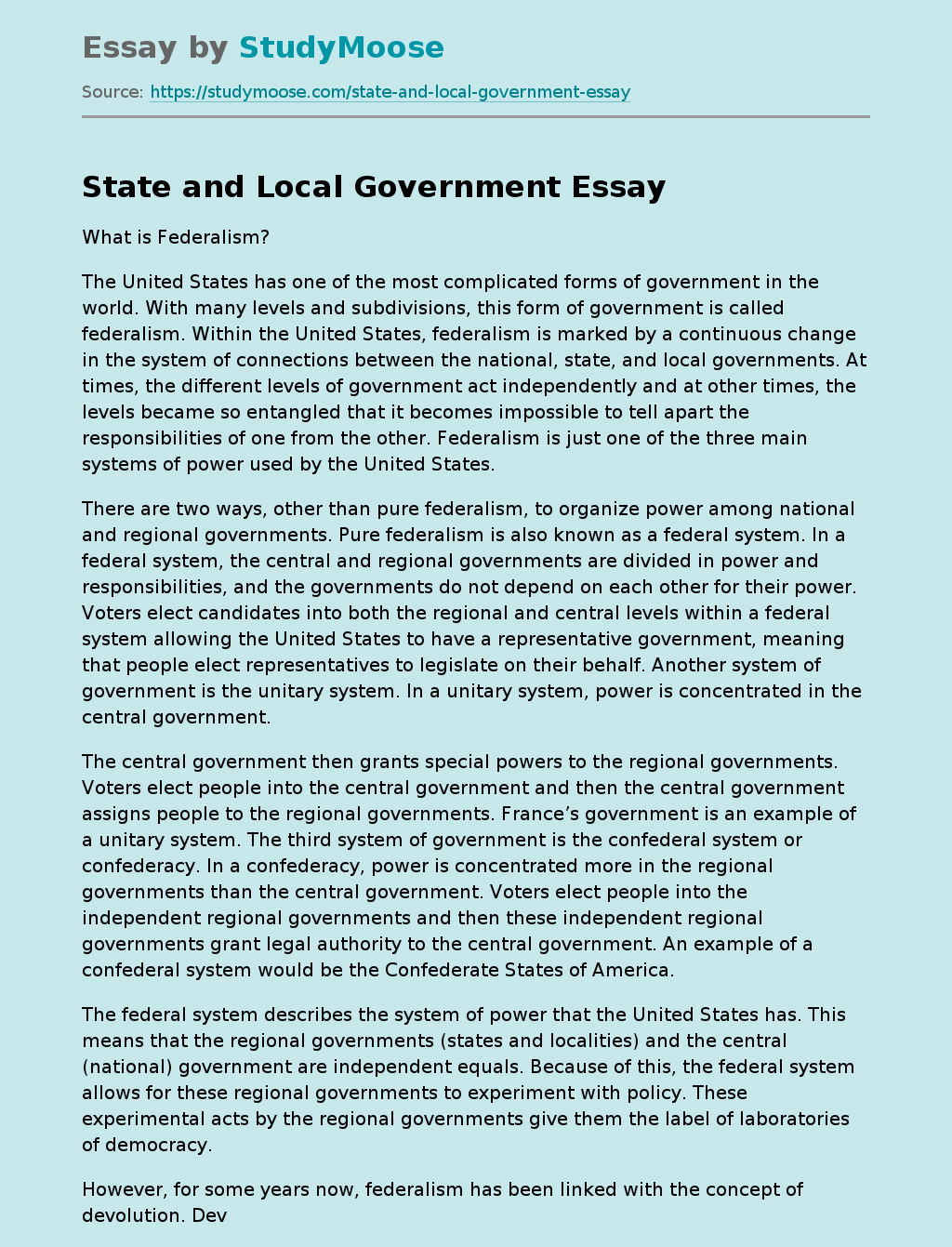