Starbucks Coffee Company was formed in 1971 and now has over 23,000 stores operating in 64 countries. (Starbucks, 2014) The decision of whether to manufacture a product in-house (“make”) or purchase it from outside suppliers/manufacturers (“buy”) can have a significant impact on the operations of a firm and is arguably the most fundamental component of a company’s manufacturing strategy. My assignment will focus on Starbucks Coffee Company and their “make or buy” coffee bean strategy. I will also analyze Starbucks coffee bean supplier selection and evaluation system and provide recommendations for improvements and lastly I will provide a purchasing cost analysis on Starbucks.

Don't use plagiarized sources.
Get Your Custom Essay on Starbucks purchasing management Just from $13,9/Page

The Chief Executive Officer of Starbucks, Mr. Howard Schultz is on record as saying that his company has no interest in vertically integrating. Starbucks currently buys coffee from over 300,000 growers worldwide. However in 2013, Starbucks bought their first coffee plantation in Costa Rica. This doesn’t mean that Starbucks plans on changing its manufacturing strategy from a buy to a make, but rather this purchase can be seen as a foray into Research & Development.

The premier Arabica bean that Starbucks drinkers demand due to its “better “taste is under threat from pests and disease and possible crop extinction. The Arabica coffee bean thrives in high elevation climates, between 3,500 to 6,000 ft above sea level. However, climate change is having a marked effect within these high elevation ecosystems.

According to a report from the International Center for Tropical Agriculture in Colombia, they predict that temperatures will keep climbing and rainfall will become more erratic, neither of which bodes well for Arabica. (Gruley & Patton, 2014) Higher temperatures at these elevations also make for fertile breeding grounds for pests such as the coffee cherry borer and diseases such as the leaf killing rust. A research project at London’s Kew Royal Botanic Gardens lists Arabica as “vulnerable” to extinction. Climate change could shrink Arabica-growing areas in Central America “to almost nothing in a few decades.” (Gruley & Patton, 2014)

Starbucks bought Hacienda Alsacia, a 600-acre coffee farm in Costa Rica last year to experiment with growing its own beans. The main objective of the Alsacia nursery is “to increase the genetic base for coffee (Gruley & Patton, 2014).

Starbucks hopes, through their own R&D programs to generate coffee seeds that are able to better resist the current pests and diseases that are inflicting the crops of their coffee growers. CEO Schultz says that Starbucks will share what it learns about farming practices and new varieties, including new hybrid seeds, with farmers in Costa Rica and elsewhere. “What it’s not about is creating anything that’s proprietary.” (Gruley & Patton, 2014)

It’s unrealistic for Starbucks to tell its coffee growers to experiment with different types of coffee seed. Economic survival doesn’t allow them that luxury. If a crop turns out badly, then Starbucks will be unwilling to buy their product, so the grower will face financial ruin. Starbucks however, can experiment with the different types of coffee beans and having their own farm allows them this luxury. “The company thinks being able to practice what it preaches on its own working farm should give it more credibility” (Gruley & Patton, 2014)

Supplier selection:
Suppliers are the direct recipients of coffee payments from Starbucks and they currently source coffee from over 300,000 growers worldwide. (Gruley & Patton, 2014) To help them in this selection process they have established an internal program called the Coffee And Farmers Equity C.A.F.E Practices which is a comprehensive set of social, environmental and economic coffee buying guidelines designed to support coffee buyers and farmers, ensure high quality coffee and promote equitable relationships for the long term. Starbucks uses 3rd party approved verifiers who then assess their coffee supply chains against the internal C.A.F.E practices evaluation guidelines. If suppliers don’t meet the minimum standards set out in these guidelines then they will not be selected as a supplier. This criterion covers all suppliers, whether they are offering coffee beans, barista apparel or food products.

Starbucks places a high emphasis on the social responsibility of its suppliers. They are cognizant of the fact that exploitation of workers in poorer countries regularly occurs so they have set strict social standards that must be met by their suppliers and indeed throughout their whole supply chain. Critical issues such as

•Full transparency by suppliers of their operations, policies, processes, and company records.

•Suppliers must provide for all workers a safe and healthy work environment. •Worker treatment and rights must be clearly set out by all suppliers

•Worker hours and compensation must be clear to all

•Environmental protection- Starbucks suppliers must fully comply with all local environmental laws and regulations and shall conduct their operations in a way that conserves natural resources. (Starbucks Coffee Company, 2014)

It is hard to recommend any obvious improvements to Starbucks supplier selection process as it one of the most comprehensive sets of supplier guidelines that exist. Constant monitoring and verification of suppliers will ensure this process continues to work well. They have taken the importance of acting responsibly beyond being just a direct Starbucks supplier and have expanded that to the wider communities who rely upon those suppliers, which can only benefit all parties within their supply chain.

Starbucks supplies coffee to over 50 million customers through 23,000 stores in in over 64 countries each week and with over 80,000 in store deliveries per week the costs associated with that supply chain are complex. However by 2010 Starbucks costs were rising out of step with their profits and it showed up in their financial results. Because of their rapid global store expansion policy, costs associated with supply chain expenses in the US rose from US$750 mio to US$825 mio, however same store sales in the US dropped by 10% over the same period. “We had been growing so fast that we had not done a good enough job of getting the [supply chain] fundamentals and costs in place,” says Peter D. Gibbons, executive vice president of global supply chain operation. To address this cost imbalance, Starbucks made significant changes to their operations. The plan essentially had 3 main focus areas

2.Reduce its cost to serve stores and improve execution

The first step that Starbucks did was to work out where the costs were coming from. Outsourcing agreements for transportation contracts, 3PL’s and contract manufacturing was 70% of Starbucks supply chain operating expenses. This was simply too high. “Outsourcing had been used to allow the supply chain to expand rapidly to keep up with store openings, but outsourcing had also led to significant cost inflation,” Gibbons observes. The reorganization led Starbucks to simplify the supply chain functions into four basic job groups: plan, source, make or deliver.

•Sourcing – split into Coffee and ‘Non-coffee’ procurement groups. Starbucks spends over US$600mio on coffee purchases and US$2.5 Bio on other items such as dairy products, baked goods, store furniture and paper goods.

•Manufacturing – whether in house or contract manufacturers.

•Deliver – all personnel working in transportation, distribution and customer services. After the reorganization each group was then assigned tasks to reduce cost and improve efficiencies.

The sourcing group worked on identifying what were the cost drivers that were pushing basic costs up. What contracts were in place with suppliers, what prices were they paying for the goods, what were the logistics costs they were paying. The purchase cost of the item was therefore only a small part of the total purchasing costs analysis.

The manufacturing group reorganized their internal coffee processing plants with the goal being to manufacture in the region where the product was being sold. The benefits of that change allowed Starbucks to reduce their transportation costs and lead times.

Because delivery costs and execution are intertwined They built a global map of Starbucks’ transportation expenditures and created a single global logistics system to monitor its diverse supply chain. An analysis of those expenditures allowed Starbucks to reduce its transportation carriers, retaining only those that provided the best service. They reviewed contracts they had with their 3PL suppliers, reviewed productivity and contract rates they paid and created clear productivity metrics with their supply chain partners. They focused on 4 main areas which created consistency & price stability across the entire supply chain.

•Safety in Operations, •Services measured by on time delivery and order fill rates,

•Enterprise savings. (Enterprise savings refers to cost savings that come from areas outside logistics, such as procurement, marketing or research and development.) By looking at all these various steps to reduce operating costs, some of which directly related to purchasing costs, Starbucks laid the foundation for future supply chain capabilities to support their growing coffee empire.

Starbucks will continue buying coffee from independent coffee growers. They aim to support the coffee growers through their own foray into R&D and are willing to share any improvements or advancements in coffee production with their suppliers. They have a rigorous supplier selection procedure which ensures that the whole supply chain is adhering to the social, ethical and environmental goals that Starbucks demands of its suppliers. This has a ripple down effect throughout the organization and finally when discussing purchasing cost analysis it can be seen that Starbucks looks at the whole supply chain and breaks that down into smaller components in order to achieve the greatest purchasing cost benefits for the company. 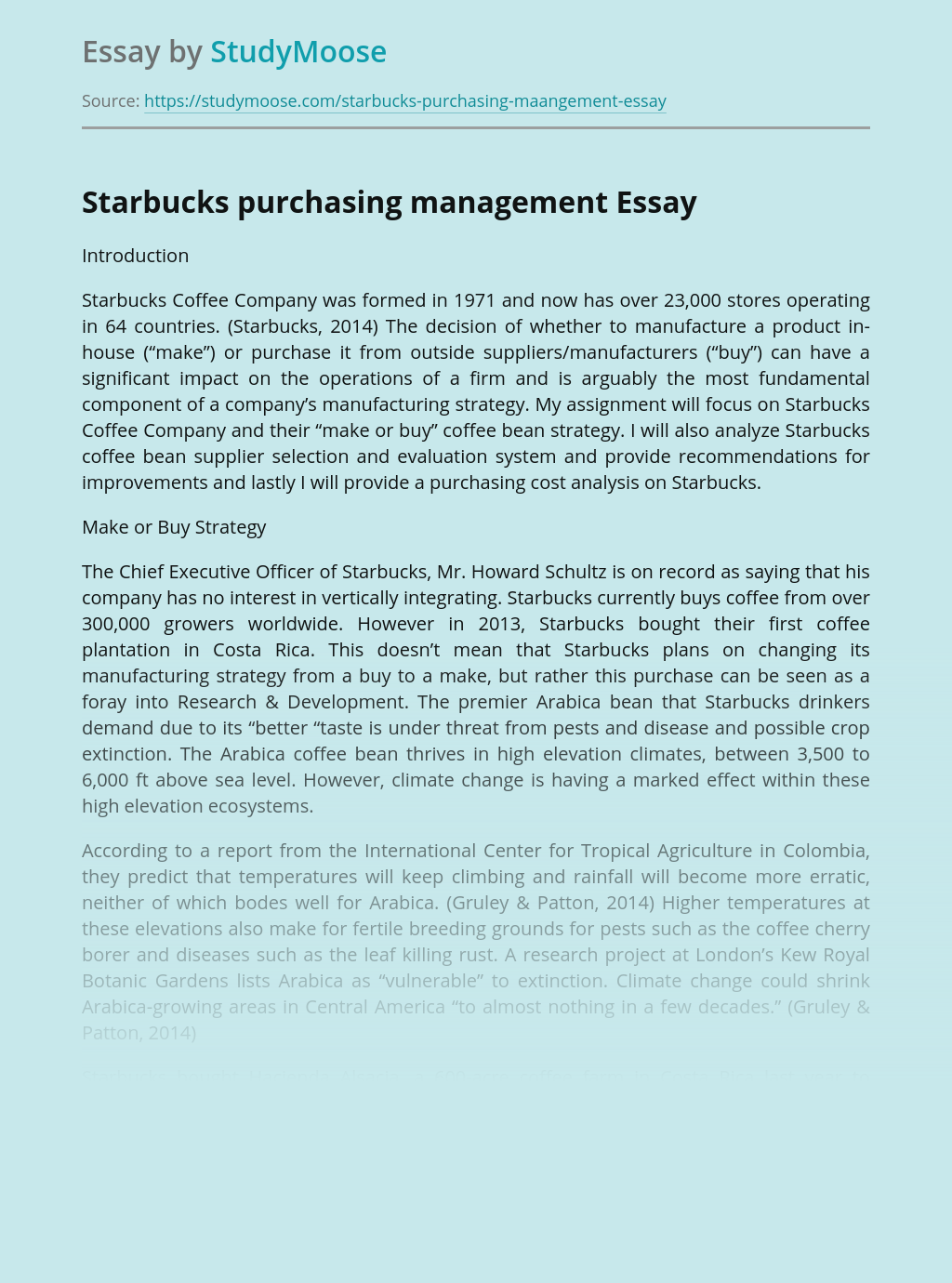 History of company Nascafe The beginnings of Nescafe can be traced all the way back to 1930, when the Brazilian government, first approached Nestlé. The agency, Brazilian Coffee Institute seeks Nestle to preserve the huge coffee surpluses, by develop coffee that was soluble in hot water. Coffee guru, Max Mergenthaler, and his team set out...

STARBUCK’S SUPPLIER RELATIONSHIPS Equitable treatment Starbucks practices diversity and equitable treatment to all four areas they engage business with. These four areas are, partners, customers, supplier and communities. • Partners (employees) – Starbucks seeks out and engages with partners who are as diverse as the communities they serve. Starbucks tends to hire young and energetic...

Get Essay
A History of the World in 6 Glasses

1. The author’s primary thesis in setting the book is that beverages have shaped human history ever given that early people were required to live by rivers, springs and lakes to make sure an appropriate supply of freshwater. 2. These fluids like water are important to us due to the fact that we would not...

The grid above is the 10 factors that affect the Spread of Innovations. Starbucks’ target market is young people, highly educated, and trend group. The life-style in China also evolves after the economic reformed and new policies regarding having child. This causes young Chinese people to not have the same strong mentality as the old...

Attention Getter: You probably wouldn’t believe me if I told you that a drug that creates the same signaling activity in the brain as cocaine is sold legally on almost every street corner across the nation. This is a fact however, and the drug is caffeine. It is one of the main ingredients in coffee,...