A spring day commemorated at UP fills one with the anticipation of experiencing the excitement and jubilation of welcoming the arrival of a new season, excitement such as that of a five year olds belief in the tooth fairy. This day was celebrated and the season welcomed countrywide by people with their own traditions and cultures, during which UP also took the initiative to kick up their heels and make the most of the day.

Don't use plagiarized sources.
Get Your Custom Essay on Spring Day-Essay Just from $13,9/Page

As stated in the CITATION Ale12 l 1033 (Alex, 2012), spring is one of the four conventional temperate seasons. There are diverse definitions of spring, but the common usage of the term differs according to local climate, cultures and customs. Spring and “springtime” refer to the season, and also to ideas of rebirth, rejuvenation, renewal, resurrection and regrowth. In today’s eventful era, people can hardly summon the time to enjoy the outdoors or activities previously relished such as horse riding or hiking which is what often resulted in the neglecting of the beauty of Mother Nature, and all the gifts of it which one has been bestowed with, thus 14th September is the occasion on which the magical shift of seasons is celebrated – even if one hasn’t stepped outside in ages!

The celebration became a proven point of success as the day had unraveled at the main campus of UP in Hatfield.

The carefree atmosphere held an air of exhilaration and delightful pleasure on arrival at the campus. Enthusiasm was evident on the study-draught faces of all as they waited in anticipation of witnessing what the day held in store for them. The program for the day was organized and extended by the student representative council which entailed plentiful action-packed events. The amphitheater held thrilling concerts hosted by the artistically intelligent music students for all spectators seeking relaxation, the music diverging from soft, melodic and soulful to thundering and hammering to the blood and marrow of one. The air was frigid with various fragrances of the pristine plants around the botany building along with diverse aromas of scrumptiously appetizing dishes of all cultures around the consumer sciences building, whilst the Aula held informative presentations by distinct lectures for the awareness of audiences interested in nature conservation.

The air itself held an air of eagerness and made all parties of the day feel welcome whether they were participating in any form of activity or not. The day had turned out to be a tremendous success and a form of delightful pleasure for all especially those who had experienced it for the first time at UP. When asked the first-year students of their expectations for the day, it was alleged quite often from several students that they had perceived much more than they had previously in their schooling years. “There is so much more freedom here for the likes of all different types of people compared to the restricted environment we were forced to endure in school” said Miss Khan, a student. The freedom which was alleged to have been ‘given’ implied to all the different types of recreational activities one could partake in, out of their own free will. This is a bonus for the university because this improves their student appreciation which in turn will make them participate more often and superiorly. The downside of this freedom could be that others take advantage of it and use it to an unethical use.

There could be incidents in which individuals took advantage of the moment because of the large crowds which have gathered and make a profit for themselves. School restriction made sure that all participated and the little which was presented was enough for all. Previous and recent spring days contrasted has proven that the UP spring day was adored and acknowledged by all. Litter remains from attendees at the UP spring day had turned out to be a huge hazard to daily students as it was failed to be rectified by staff. The occurrence of having such a day had become an intense debate topic between those who thought it a good idea and those who didn’t. The students had brought along with them family members and friends to enjoy the day together, and not being part of the institute, they weren’t familiar with the ethics and rules the university rolled with. They had ignorantly littered the grounds inside the university making more work for cleaning staff of the university, which in turn would result in a waste of time because of the extra work on hand.

The party in favor of having a repetition of the day stated that awareness for better hygiene practice could be spread for future days and extra dispensary equipment could be spread around to make it easier to get rid of litter. Generally, the idea of having similar future spring days would be an advantage for the university because it would make advertisement much convenient of all the university facilities, accommodations and programs for potential students. The spring day was a tremendous success, and all the planning and dedication of the student representative council and all other parties which were involved in the making of the event had not gone to waste.

Throughout the years, students and outsiders have always experienced this day like it were the first. Critics have reportedly said that this tradition should continue because of the positive study environment it ensures in wake of the newly welcomed season of spring. Spring Day at UP for was an eye-opener for first year students, since they experienced freedom and the joy of spring, as new adults. 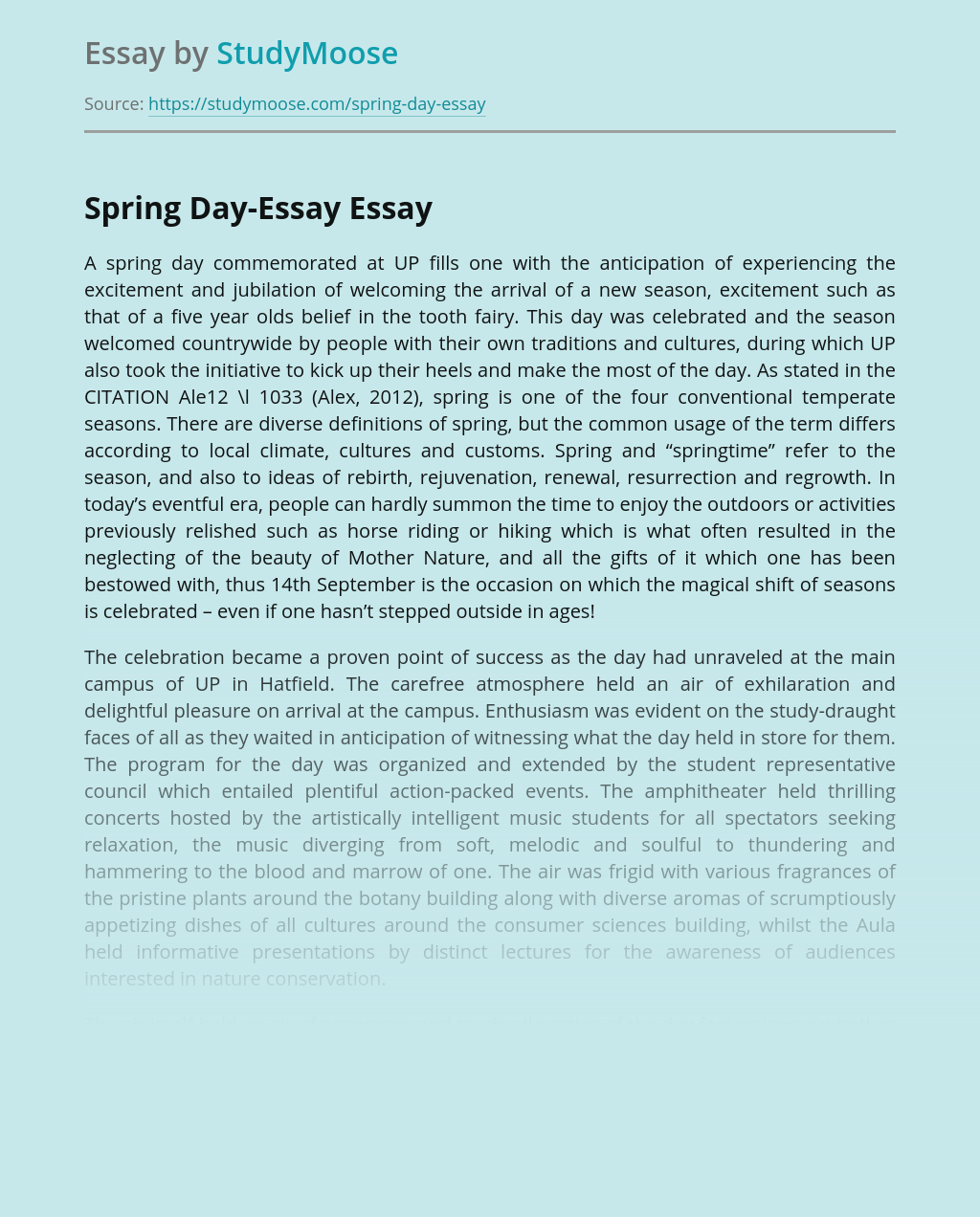 Rate this post Student money problems affect performance Many students believe that financial problems are having an adverse effect on their academic performance, a survey of University of Central England undergraduates has shown. The survey, carried out by UCE’s Centre for Research into Quality (CRQ), found that 51.9 per cent of the 1,139 full-time undergraduates...

Academic Honesty and Why Plagiarism Is Wrong

Rate this post In my understanding academic honesty is trust in a relationship between professors, teachers, students etc. It means to be honest with your fellow classmates, teacher, and pupils in the process of education. To be academically honest means not to cheat, fabricate, or copy someone else’s thoughts and ideas as if they were...

Get Essay
Is College Education for Everyone?

Rate this post Is college for everyone? I am sure this is a question that many future, current, and even graduated college students have asked themselves at one time or another. In her blog posted in 2007 on AssociatedContent. com “Is College for Everyone”, writer, Pharinet, uses her experience, logic, emotion and reasoning as a...

Rate this post The advent of innovation and internet in the last years has actually opened up numerous opportunities for unrestricted information gain access to. This in addition to the increasing academic pressures has actually led trainees to turn to plagiarism at a disconcerting rate (Elliot, 2004). The issue of plagiarism in the academic context...

Rate this post Everyone has a dream about future. The picture coming to my mind about my future is so fantastic. I dress up in a professional way and go to my own office in a big company. I am an accounting manager of the company whose employees have paid vacations and many other benefits...

Rate this post Students committing to the college of their choice are unaware of the peer pressures that arise when one attends school. Many may feel as though peer pressures tend to happen more often when one lives on campus, but it can occur off campus too. For example, peer pressures can lead to partying,...

Rate this post My name is Zuo Jing, the Associate Professor from the School of Communication, Yunnan Normal University. It is a tremendous pleasure to write on behalf of Zhao Hanying, one of my favourite students to support her application to your university. I came to acquaintance with Hanying in the Creativity and Planning of...

Rate this post Prospective students have many factors to consider when they are deciding what institution to attend. During this process students will often do research on the campus, location, the available courses, and the extra curricular activities available. One thing that is not always investigated however are the resources that the campus offers, and...