A determination of thermodynamic variables of KNO3 is presented. KNO3 was heated and dissolved in varying volumes of distilled water. Upon dissolution, the KNO3 solution was removed from heat and the temperature was recorded once crystals formed. For each solution, ∆G the Ksp were found with the temperature and molarity values. ∆H and ∆S were found through the linearization of the data with a plot of lm(Ksp) vs.

∆G becomes increasingly negative as temperature and concentration increased. ∆H was found to be 29.

Turn in your highest-quality paper
Get a qualified writer to help you with
“ Solution Calorimetry: Thermodynamics of Potassium Nitrate ”
Get high-quality paper
NEW! AI matching with writer

The solar power industry has long been concentrated on developing photovoltaic cells, but recently plants call Concentrating Solar Power (CSP) plant have found new methods involving KNO3 for energy1. With KNO3 as such a promising source of energy, its thermodynamics whilst in solution are of interest.

The thermodynamic properties of the molecule need to be understood so that its uses for creating green energy can be improved upon. Beyond energy for buildings, potassium nitrate can also have a hand in the energy in the human body.

When consuming food, there is hope that the food is free of chlorine and other unwanted metals; thanks to potassium nitrate, that is a real option. Potassium and nitrogen are elements essential to the life cycle of the plant. Previous sources of these elements consisted of chlorine containing
substances, which would introduce that chlorine into the plants. Applications of potassium nitrate in fertilizers have removed the necessity of metals being introduced into crops.

Potassium nitrate does not simply allow farmers to keep metals out crops, but also to increase crop yield and plant health. When potassium nitrate is in solution it is able to offer plants a source of potassium and nitrogen, two elements essential to plant growth and health, without any negative effects1. This exhibits another instance in where the spontaneity of the reaction would be of great interest. If the reaction is spontaneous, the use of potassium nitrate in fertilizers is a useful application. If not, then adjustments would need to be made accordingly.

The thermodynamics of a solution will help further applications of KNO3. When studying thermodynamics there are three variables that stand prominent: ∆G, ∆H, and ∆S. ∆G represents the amount of free energy of a system, which is ideally minimized and less than zero for spontaneous reactions. ∆H is the enthalpy or the total measure of the energy of a system. ∆S is the entropy and represents the amount of disorder found in a system. These thermodynamics variables are related through the equation ∆G=∆H-T∆S.

A solution of KNO3 and water is created and allowed to cool until crystals are first observed, which is when the reaction is at equilibrium. The values of molarity and temperature are recorded and used to calculate Ksp and ∆G. ∆H and ∆S are found through a plot of ln(Ksp) vs. . The values obtained will be compared to the literature values.

IV. Experimental Procedure
A 400mL beaker was half filled with tap water and boiling ston, placed on a hot plate, and heated. A ring stand was assembled to submerge a half of a 25x 200mm test tube in water. The test tube was filled with 20.006 g of solid KNO3 and 15 mL of distilled water. At the point where all the KNO3 was dissolved, the test tube was removed from the heat source and stirred until crystals were formed.

The temperature was recorded at the first visual indication of crystals. The volume of the tube can also be found in Table 1. The volume was determined by filling up a separate 25x200mm test tube to be visually equal to that of the KNO3 test tube. This was considered the first trial. Six more trials were conducted by adding an additional 5mL of distilled water at the beginning of each new trial.

Table 1 presents the data collected in this experiment. The equilibrium constant, Ksp, was calculated at each temperature from the molarity, and ∆G was determined from Ksp. It can be seen that Ksp increased with temperature, indicating that higher temperatures favor the solubility of KNO3.

The following relationship can be obtained:
ln(Ksp)= (3)

Figure 1. Linearization of the experimental data in order to calculate the thermodynamic variables ∆H and ∆S

V. Discussion
Finding the thermodynamic variables of ∆G, ∆H, and ∆S by manipulation of the experimental data and the equation ∆G=∆H-T∆S was done successfully. The experimental value for ∆G became increasingly more negative as temperature and concentration increased. ∆H was found to be 29.46kJ/mol giving a 15% error from literature values. ∆S was found to be .120 kJ/mol, which is 3.81% error compared to the literature value. According to the experimental values found, the dissolution of KNO3 is a spontaneous reaction at all temperatures studied.

The ∆G was found to be negative at all temperature studies, which indicates a spontaneous reaction. The ∆S>0 is rational since this reaction is going from a single molecule, to two ion particles. An increase in the number of particles in a system increases the disorder of the system.

The increase in entropy is also caused by the change in structure of KNO3. The solid KNO3 would have a more organized, more ordered, structure then would the ions moving randomly through the solvent. Since the reaction being spontaneous is desirable for application of KNO3, the found results indicate that KNO3 has a lot of potential for application in energy and crop growth.

The sources of error for this experiment are varied and expansive. One of the largest sources of error is unavoidable loss of product with this method. Stirring of the KNO3 solution was necessary, but with the removal of the stirring rod and thermometer product was removed from solutions. A visible white powder could be observed on the sides of the test tube, which is a clear sign that the moles of KNO3 present in solution had decreased. This decrease was not accounted for in calculations. Another source of error is in measurement of the water level.

Taking volumes by visual comparison is not accurate. The volumes were taken in rounded bottom test tubes, which would cause the level of the water to be affected by the angle of the test tube. Although water levels may have appeared to be equivalent, the possibility of inaccuracy still remains. A better method for reading the volume could have been the use of a graduated test tube.

The solubility of certain molecules decreases with the increase of temperature. The effects that this behavior has on the thermodynamics variables can be reasoned through. For instance if the data of ln(Ksp) vs. 1/T was plotted for the molecule the line would have a positive slope.

A positive slope indicates a ∆H, which has the opposite sign of ∆H for KNO3. Since the solubility is decreasing with temperature, there will be more solid present as the reaction continues. This will give the -∆S value. With these values, the ∆G of the reaction can be assessed. The equation of ∆G indicates that ∆G will be negative at low temperatures, but rise and become positive as the temperature increases. This is much different than what is observed for the KNO3 reaction whose ∆G decreases as temperature increases. 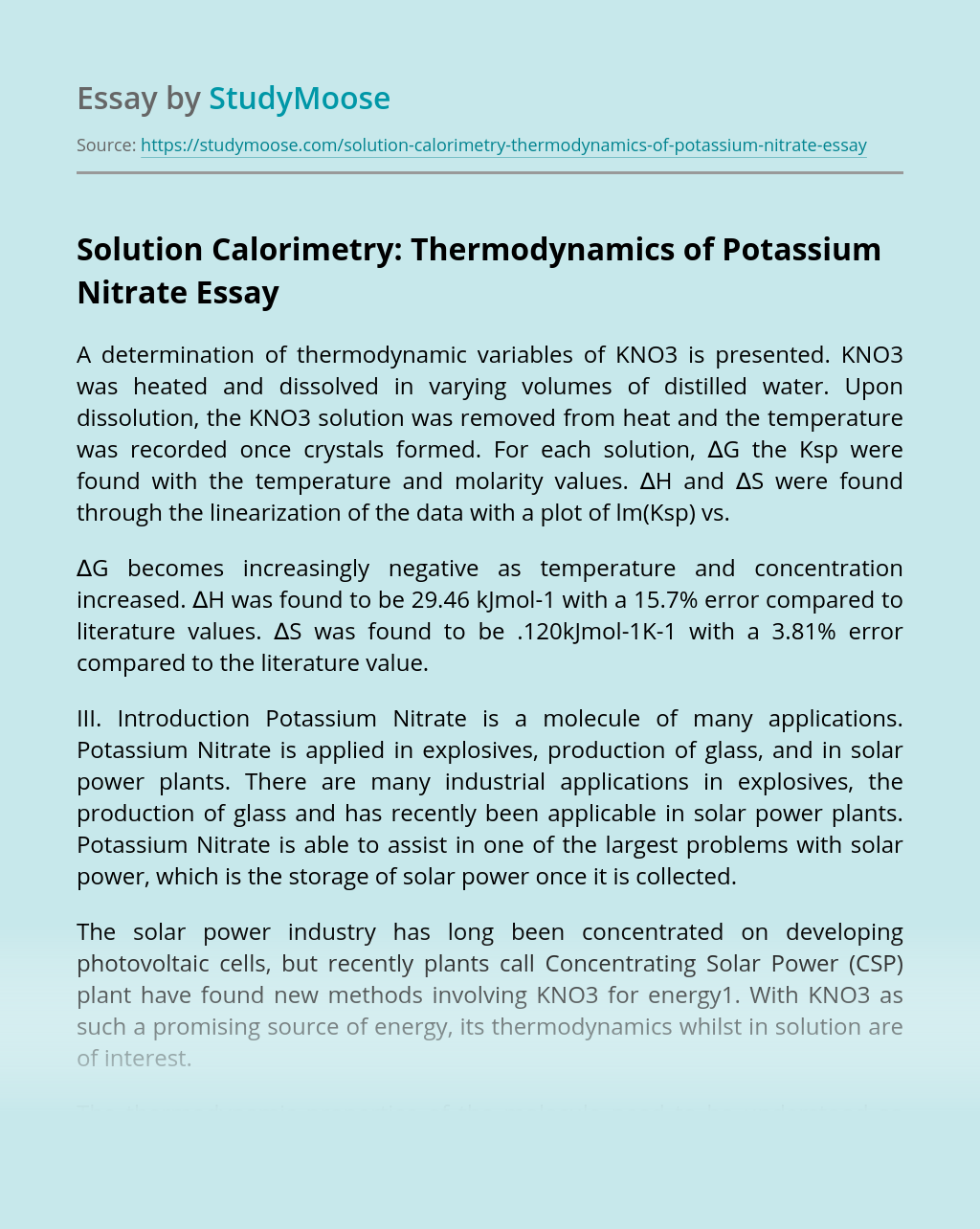 Turn in your highest-quality paper
Get a qualified writer to help you with
“ Solution Calorimetry: Thermodynamics of Potassium Nitrate ”
Get high-quality paper
Helping students since 2015
Stay Safe, Stay Original