Song of Songs is a volume of personal sentiment poetry in the Old Testament of the Bible. It is also known as the Song of Solomon, which has encouraged the idea that King Solomon was the author of the first version of the book, giving it authority and legitimacy. However, after it was uncovered that Solomon’s name was added to later versions of the book, the author has been deemed anonymous with no way of determining what his or her gender was.

The series of lyrical poems constructed from lengthy dialogue between two lovers, dates all the way back to the early period in Israel’s history, after the return of the Jewish people from exile in Babylon. The Song of Songs aims to describe the relationship of God and his people by introducing the reader into the non-public world of ancient Israel through the exchange of love poems between two lovers, which symbolize Jesus and the Virgin Mary.

Throughout the Bible, the idea that God’s love requires constant return and willingness to embrace God’s presence and loving relationship prevails.

In order for the berit, the alliance between God and Israel, to exist as well as the covenant to be maintained, there has to be a constant willingness of the Hebrew people to embrace with God in presence and relationship. This covenant relationship is also seen through Abraham and Moses, who God blesses in an unmerited way, in order to engage in a particular covenant to further on expand it to the universal lens.

Both of these characters doubt God, as does the woman in the poem, and they question the truthfulness behind his promises and blessings. It takes time for them to understand that in order for the blessings that God gives them to become fruitful, they have to be able to engage in a loving relationship with him, to trust him, and respect their covenant with him. Due to the similarity between these characters, the Griffiths commentary states that the Song of Songs provides a template for thought and writing about what it’s like to be the Lord’s beloved and who the Lord sees as his ideal beloveds, which will affect who he chooses to bless (Griffiths, Song of Songs, xxxviii).

The idea of the importance behind being the Lord’s beloved is constantly present in the Old Testament through one of its main themes, which is God’s desire of relationality. Even though God is constantly relating to specific people and blessing the particular, his overall goal is to bless the whole human race and to guide them into relating well with one another. Due to this, the relationship between humans and between God and humans is of extreme importance. In Genesis 2, the story of creation portrays the creation of humans in the image of God, the care of the world, the care for each other, and the relationship with others. Through the relationship between Adam and Eve a precedent of how to care for each other, in a loving relationship, is established. The Song of Songs continues this precedent, since it’s the exchange of love poems between two lovers and their sexual encounter, which is the purest, and most intimate way of relating to one another. Just as the lovers share this pure and never-ending love, the world, as a whole, exists in a loving relation with God.

Based on how the Song of Songs fits into the greater theme of God’s relationality to his people, as well as its parallelism to different writings in the Bible, it is important to further analyze its symbolism and what the true story it is trying to tell behind all the poetry and dialogues. This paper will analyze verses 2-8 from section 5 of the Song of Songs, in which it is clear that the human acceptance of God’s love requires constant return and willingness to embrace God’s presence and loving relationship. In order to do this, the continuous connection and rejection between humans and God, the importance and purity behind accepting God’s presence, and the great intimacy behind the act of making love will be discussed with the aid of the Paul Griffiths and Ann Astell commentaries.

The Song of Songs is the only part of the Bible that doesn’t mention God, yet it is an allegory idealizing God’s love for Israel through the love between two lovers. The Astell commentary discusses how the bride in the poem recalls the biography of the Virgin Mary aiming to put the lover in direct contact with people’s lives to serve as a moving moral force of connection (Astell, The Song of Songs in the Middle Ages, 42). The section that is being analyzed starts with the male lover, knocking on the female’s door, urging her to open.

As she hears the knocking, her craving for the male lover’s presence ignites, however she is reluctant about opening the door or not due to fear of what could happen if she does. The patterns of connection and untying, company and non-appearance, need and antipathy, that arise throughout this moment and throughout the entire section, show rhythms that are common to human lovers. The Griffiths commentary relates these rhythmic patterns with Lord’s love for his people and Israel (Griffiths, Song of Songs, xxxix). These patterns of relating and disengaging, in relation to God, arise because people are not able to engage in intimacy due to their sin and ignorance about all the great things this relationship could bring to their lives. The ignorance about the importance and true need of embracing God’s presence creates doubt, which pushes people away from their loving relation to God.

As the relationship between God and his people begins to dissipate, they start to feel the need to return to their relationship with him, in order to receive a sense of pureness, intimacy, and loving relationship again. Based on analysis throughout the Astell commentary, these patterns and emotions expressed encourage the audience to discover further parallels in their actual relationship with God by finding fulfillment through the story of Jesus and Mary. By doing so, readers are able to stimulate their emotional participation in Mary’s experience, helping them become an extended version of her (Astell, The Song of Songs in the Middle Ages, 45). Throughout the Song of Songs, the author is seeking for the people of God to connect to Him and endure in a loving relationship by allowing them to relate to the Virgin Mary, which represents one of the purest humans there is.

As the passage begins and the beloved knocks on the door, doubt arises in the lover as she is unsure of standing up to open the door, she says, “I have washed my feet- how can I make them dirty?”. This statement emphasizes how the lover is doubtful of whether connecting and relating to the beloved or pushing him away, thus rejecting their loving relationship. Still, the significance of this verse is regarding the feet, rather than the doubt behind the questioning. There is a special significance regarding feet in the Bible, they are considered the dirtiest part of the body, and as the Griffith’s Commentary explains, the part that needs the most cleaning.

The refusal of the lover into dirtying her feet, in order to open the door shows her tendency to guard her purity from the risk of harm, as well as her fear of death since people who sin are punished with death. She feels she is where she needs to be, but she is actually not. When the beloved is representing God, it is clear that if her feet were to get dirty on the way to embracing his presence, he would be able to clean them and make her pure again. In the story of the Virgin Mary, even though she did not conceive Jesus with her lover, the fact that she was bearing God’s child took the sin away from her and made her pure once again. Lack of knowledge in God’s power to forgive sin and grant purity are a great factor as to why doubt arises in the people of God’s desire to embrace God’s loving relationship. The doubt within the lover, which started the first time she rejected the beloved’s entrance, has no purpose. She should feel the security that if in the process of embracing God’s presence, her feet would get dirty, he would wash her, in this instance, by making love to her, creating the most intimate type of bond and form of relationship that there is.

As the poem develops, the lover’s doubt about opening for the beloved starts to disappear as, “(her) heart began to pound for him” and she decides to open the door, without fear, for the beloved to enter. When she finally decides to open, the beloved has already left, leaving the lover looking for him through the streets of Jerusalem. An inference that can be driven from this part of the verse, is the eagerness of the writer to connect the reader to the Virgin Mary so that they can both, together, look for God. This can be drawn upon the fact that throughout the New Testament, there are several encounters in which the Virgin Mary is seeking for Jesus in various places. This part of the poem shows how even though God seeks to relate to humans and to create a loving relationship with them, if they are not reciprocating of the relationship and push God away, it may come to the point when his desire to pursue a relationship will dissipate. However, the Bible and the rest of the verses throughout the Song of Songs show how once the doubt within humans disappears and their desire to ignite the connection and loving relationship with God appears again, God will always be willing to embrace with humans, just as he did with the Virgin Mary. This pure and constant eagerness to embrace with God in presence and relationship is what allows the covenant to be maintained. 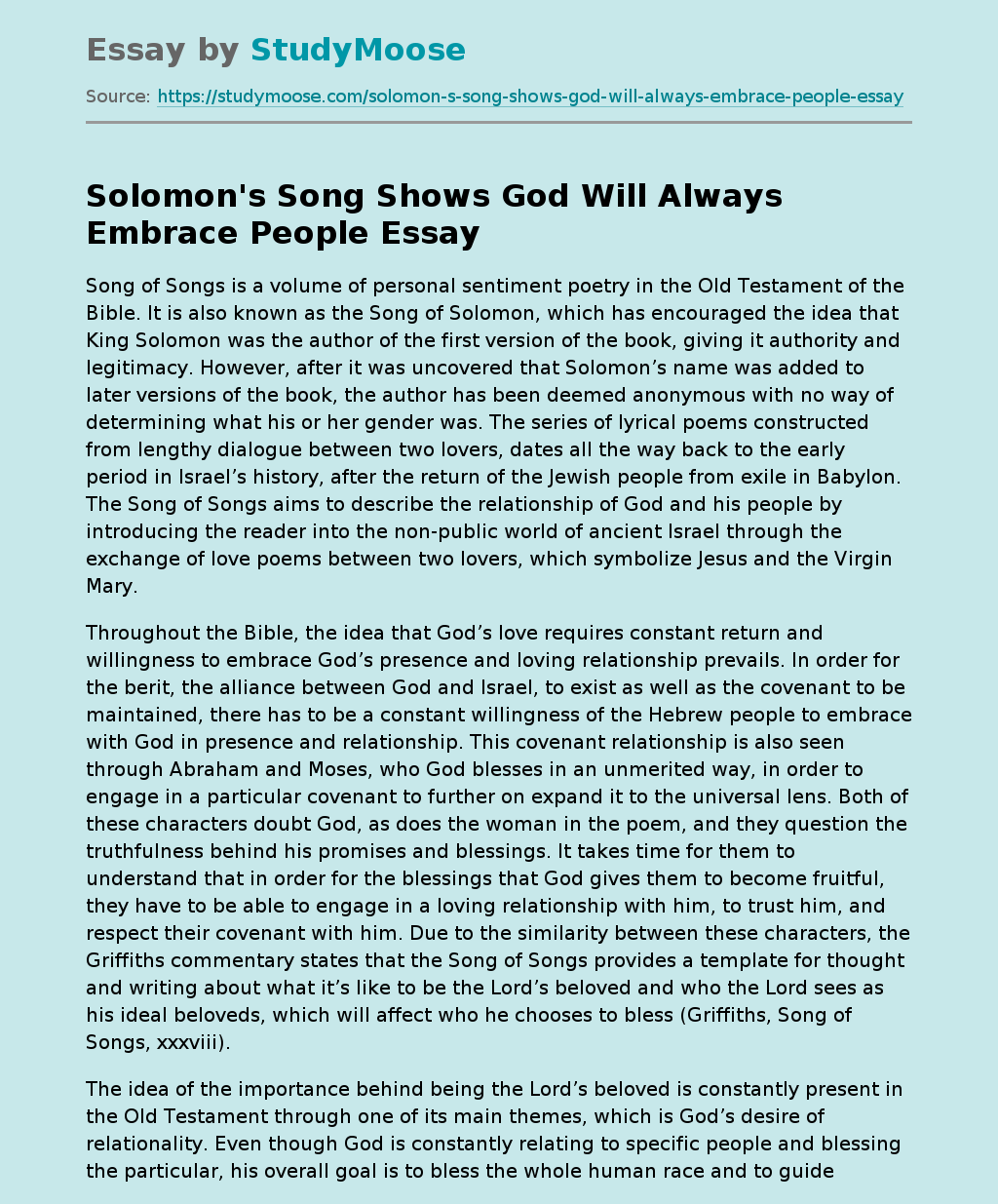