Social Philosophical Thoughts and Contributions of Dr. B. R. Ambedkar

Dr. B. R. Ambedkar’s philosophical contribution has in the areas of Humanism, realism and rationalism. He propounded a philosophy of humanism taking in account both theory and practice. For him philosophy is not purely theoretic matter but has practical potentialities. It has its roots in the problems of life and the theories that are propounded return back as a contribution for the reconstruction of the society. (Jatava, 1997) The Indian population is generally classified on two bases: linguistic and religious.

Turn in your highest-quality paper
Get a qualified writer to help you with
“ Social Philosophical Thoughts and Contributions of Dr. B. R. Ambedkar ”
Get high-quality paper
NEW! AI matching with writers

The religious classification is more impressive and arresting for the foreigner. One who is interested in the struggle of the masses must learn to look at the population of India from the social and economic point of view. His philosophy is based on the Indian society. His social critique has developed into philosophy of thought and action leading to human emancipation. His thoughts on the week and deprived of the society are guiding principles for anyone working for their upliftment.

Ambedkar’s democratic mind and scientific attitude found in the ancient Hindu theory of Chaturvarnya- which degenerated in the present caste system- a complete denial of the ideals of social humanism namely liberty and equality, which formed the life breath of his vision of a happy world. He envisaged a new social order, not on the basis of the four Varnas or Castes, but on the principles of liberty, equality and fraternity, necessarily bringing about through peace and persuasion, therefore, propose to refer to his views on these matters here.

Dr. Ambedkar condemns the unjust behaviour-patterns in the social matters and the human relationship based on them. He upholds the need of social democracy, based on liberty, equality and fraternity- the essential elements of his philosophy of social humanism. Now it also becomes necessary to analyze the economic aspect of social humanism. Undoubtedly, the economic motive plays a fundaments role in human relationship in modern society; in
fact, to some extent, it has become an end of human life to some people. But Dr. Ambedkar’s idea of economic relationship is relational in so far as it insists on the economic welfare of the poorer sections of society and regards economic values as a means and not as an end in themselves. (Jatava, 1997)

The political thoughts of Ambedkar are based on a concern for the welfare of the downtrodden classes along with a recognition of upholding the need of national integration by making political democracy the possession of all. This forms another basis of his philosophy of social humanism. (Jatava, 1997)

The religion is the first aspect which leads towards the establishment of moral order in society. For every social, economic and political problem is at bottom a moral problem. By studying the budda’s religion Dr. Ambedkar envisaged, as an essential preliminary, a moral structure of society, which is most suited to the needs of modern man, without being any hindrance to other people’s religious sentiments and aspirations. It this connection it may be noted that Ambedkar is against the Marxian irreligious and anti-religious outlook on life. He regards the materialistic or the Marxist way of life as inferior to the Buddhist way. To consider and discuss these points in the light of Ambedkar’s thought, we therefore propose to set them out here. (Jatava, 1997) 6. UNDERSTANDING OF RELIGION FOR AMBEDKAR

To Ambedkar religion is a “social force’ a plan of action to realize human being’s hope of a fuller and happier life here in this world. A religion that enriches the present and builds a future is a true and useful religion rest is all mockery. Having studied the Hinduism he concluded that the social Philosophy of Hinduism is based on inequality and therefore it cannot save anybody. The inequality exists in other religions too though may be at a lower level. (Wilkinson & Thomas, 1972) The religion teaches to hope in the divine grace for the betterment and Ambedkar goes completely against such view. It finds no place in the philosophical, ethical and religious ideas of Ambedkar. (Jatava, 2008)

Ambedkar was not only an idealist but also a realist. His move toward drafting of the constitution was not merely philosophical but a realistic one. It throws light on the existing social condition aiming at national goals and bringing about reformation in the Indian society. He was committed to the social restructuring but in a democratic way. He did not go against the government but remained in the government to serve the interests of the scheduled castes and other exploited classes. He believed that it was much easier to bring about change from within than from outside. (Jatava, 2008) Ambedkar is not only a philosopher or a scholar but also a statesman, leader and liberator. Some of his Social thoughts that contributed to the dignity and social status to the exploited section of the Indian society could be enlisted below. (Keer, 1971)

Ambedkar was in search of equality and truth. He did not find it in Hinduism therefore he was on a lookout for a religion that would make him feel liberated. He was attracted to Buddhism because the fundamental principal of Buddhism is equality. On becoming a Buddhist he expressed his feeling by saying that he felt as if he had been liberated from hell. Though he was born a Hindu he did not want to die as a Hindu and he got his wish fulfilled before his death. (Wilkinson & Thomas, 1972) He said that a democratic system cannot be justified without preserving individual freedom. The values of liberty and equality demand respect for all citizens irrespective of any distinction of caste and creed. (Jatava, 2004)

Ambedkar underwent a bitter experience of being an outcaste in the society. It had a deep impact on his life and therefore he embarked upon a journey that would lead to eradication of untouchability. Within the Hinduism he took of facts that would favour equality. He spoke in favour of the untouchables and formed organizations to bring about change in the social life of the untouchables. He made sure that constitutional and legal provisions in favour of the untouchables got passed. (Vakil, 1991) By the removal of caste system he was aiming at the root of social evils. In rural areas many atrocities were inflicted on the untouchables. He persuaded Brahmins to remove untouchability but they were not interested in it and wanted to be as it is. He sought the help of non-Brahmins but could not succeed in his mission. He therefore favoured conversion to put an end to untouchability. He realized that from within it was difficult to bring about a change because the caste structure has a religious rootedness. It was only an external help that could change the situation and that he called conversion. (Vakil, 1991)

For hundreds of years the untouchables in India remained uneducated. It was with the arrival of the Christian missionaries that they began to go to school and learn. As an educationist he founded the People’s Education Society on July 8, 1945 and started Siddharth College on June 20, 1946 in Bombay and Milind College at Auragabad. All this he did to advance the interest of the weaker section of the society. (Jatava, 2008) Ambedkar raised the slogan “educate, organize and agitate” to realize their lost respect and reclaim their humanity. For him education was the main key to open the doors of light, vision and wisdom. He was a great writer who wrote dozens of historic and thought-provoking books. The primary purpose of Ambedkar’s life was to encourage people to get educated, know the truth and practice the right path. He recognized that education has a vital force for the individual development and social change. (Jatava, 2004)

In this presentation I have made an attempt to present some of the social thoughts and contributions of Dr. B. R. Ambedkar, a great personality, a revolutionary, a great fighter for the respect and dignity denied to the shudras, untouchables and the pariahs. By his relevant questions he challenged the divinity and the infallibility of the Hindu Shastras which created the society of inequality. According to him a religion which does not contribute to the individual and social wellbeing is of no use. He created rights for the peasants, labourers and untouchables. He fought for their educational and economic emancipation. He can be thus spoken of as the protector of the human rights and an agent of social change for those who were denied of it in the society. (Jatava, 2008) The life of Ambedkar is itself an inspiration for those who want to be social workers. His life is a journey from slavery to freedom, from inequality to equality and from
injustice to social justice. 9. 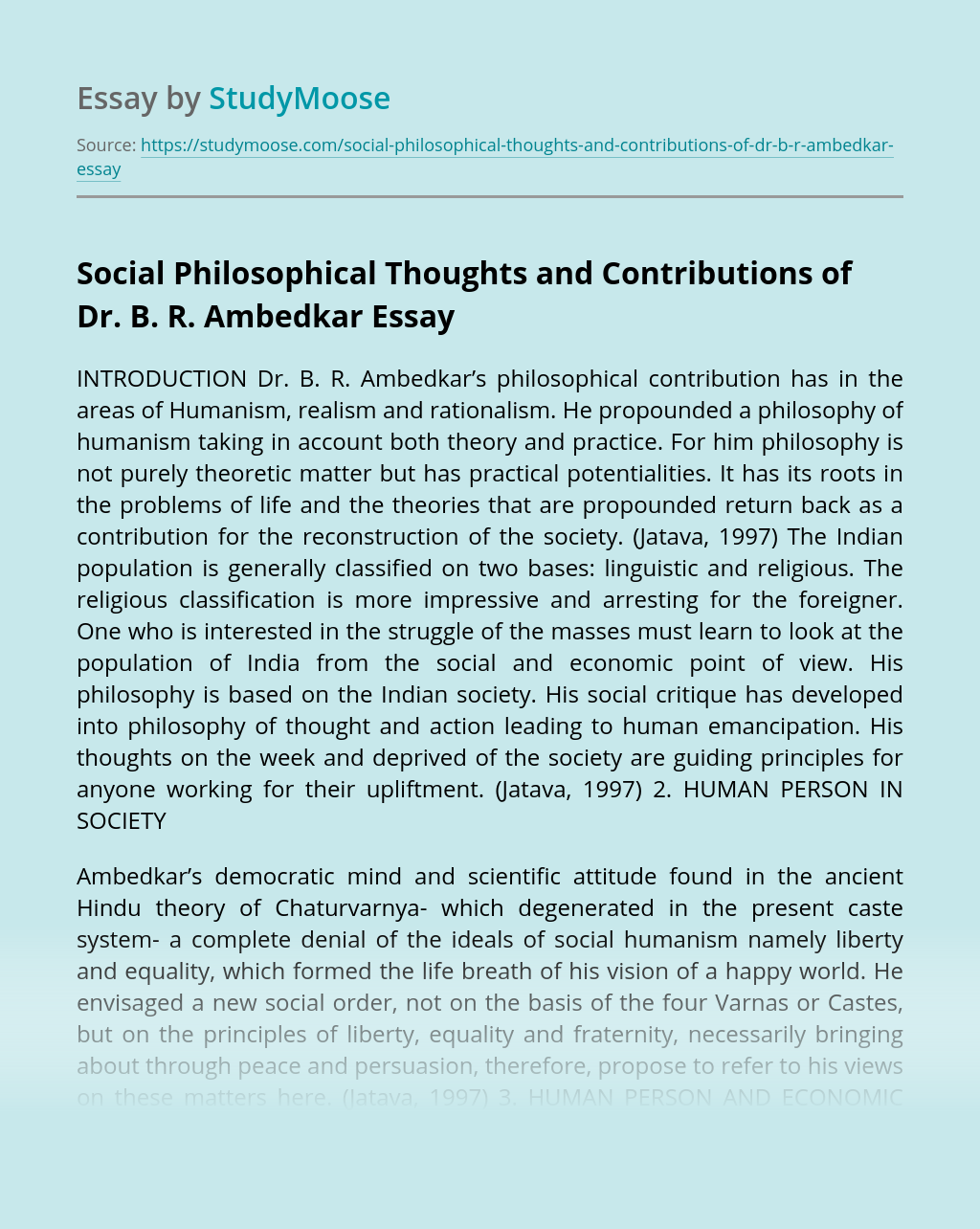 Turn in your highest-quality paper
Get a qualified writer to help you with
“ Social Philosophical Thoughts and Contributions of Dr. B. R. Ambedkar ”
Get high-quality paper
Helping students since 2015
Stay Safe, Stay Original