Social Class and Status in Fitzgerald's The Great Gatsby

The Wilsons are trapped in their own poverty and condemned by the economic system to live in a poor environment and remain unhealthy. The wealthy are perceived as never working and live in luxurious houses and behave like lords. Using a Marxist approach and the ideas of Lukacs, a Marxist society would possibly denounce Gatsby for denying his working-class origins and for bypassing the class system through the use of criminal activity and cheating his way into the ruling class and then not behaving as the rest of the bourgeoisie and instead of making an attempt to fit in he uses his power to chase after Daisy Buchanan.

Don't use plagiarized sources. Get your custom essay on
“ Social Class and Status in Fitzgerald’s The Great Gatsby ”
Get custom paper
NEW! smart matching with writer

Gatsby’s death could be interpreted as an inevitable outcome in regard to the Marxist view of his actions and the fact that he used all his power for personal means and for his fantasy rather than either fitting into the societal boundaries or challenging it and the social injustice wrought by people such as Tom Buchanan who have as much power and leisure as they please while the working class must suffer at the hands of the system and endure the labour and hardship just to have a chance at survival.

Proficient in: Wealth And Poverty

‘How far is commodity exchange together with its structural consequences able to influence the total outer and inner life of society… the extent to which such an exchange is the dominant form of metabolic change.’ Lukacs (1922, pg.84) – Gatsby shifted and lied about his past’ quest for these commodities he throws lavish parties and has no second thought.

Lust for Daisy is what drives him, he tries to manipulate the Marxist system using his wealth and reputation to win her over. Is able to afford any commodity but started as a proletariat and shifted into the bourgeoisie and switched class. Links to the underworld with Meyer Wolfsheim didn’t play the system legitimately and instead cheated his way to the upper class neither character fits directly into one category in the Marxist system. Hides his past as Jay Gatz to fit in because of the view and differentiation between ‘new money’ and ‘old money’, (Old money being the inheritance of wealth through a wealthy bourgeoise ancestry.) in the society of America and the people who have attempted to challenge the system and have acquired wealth through other means in a short amount of time such as Gatsby through his connections to Meyer Wolfsheim and the underworld and Dan Cody. ‘The truth was that Jay Gatsby of West Egg, Long Island, sprang from his Platonic conception of himself. He was a son of God’ (pg. 98). Here, the use of ‘God’ is blasphemous and conveys to the audience Gatsby’s quest for riches and his ambition which could be viewed more as delusional. A Marxist interpretation would not view Gatsby’s shifting of class as truly dismantling the system and would instead view it as a reinforcement to the unfair economic divide between the rich and poor. Worked for a millionaire named Dan Cody on his boat ‘became a father figure and inherited his wealth when he died. Transcends his role as a proletariat.

Gatsby prioritizes love over money within the text: ‘getting deeper in love every minute, and all of a sudden I didn’t care.’ (The Great Gatsby, pg 150.) Here, this stresses the idea that Gatsby has possibly abandoned his ambition and would prefer to spend his time to ‘attain’ Daisy rather than run his business. He believes that there is no point in his money or business unless his fantasy is complete and has the opposite desire to those among him in the bourgeoisie. Gatsby implies that he cannot fulfill his ambitions and focus on a relationship with Daisy at the same time and because Gatsby has always been devoted to money and earning it, Daisy can be viewed by him as just another object or commodity to ‘obtain’ to show his power and reputation within society. Within the novel, Gatsby could be perceived as representative of the American Dream and Gatsby’s death and failure in the novel being the idea that the failure of this idea is inevitable and that within the Marxist system anything that goes against the status quo and the class system should be crushed and is destined to not succeed.

Social Class and Status in Fitzgerald's The Great Gatsby. (2019, Dec 12). Retrieved from http://studymoose.com/social-class-and-status-in-fitzgeralds-the-great-gatsby-essay 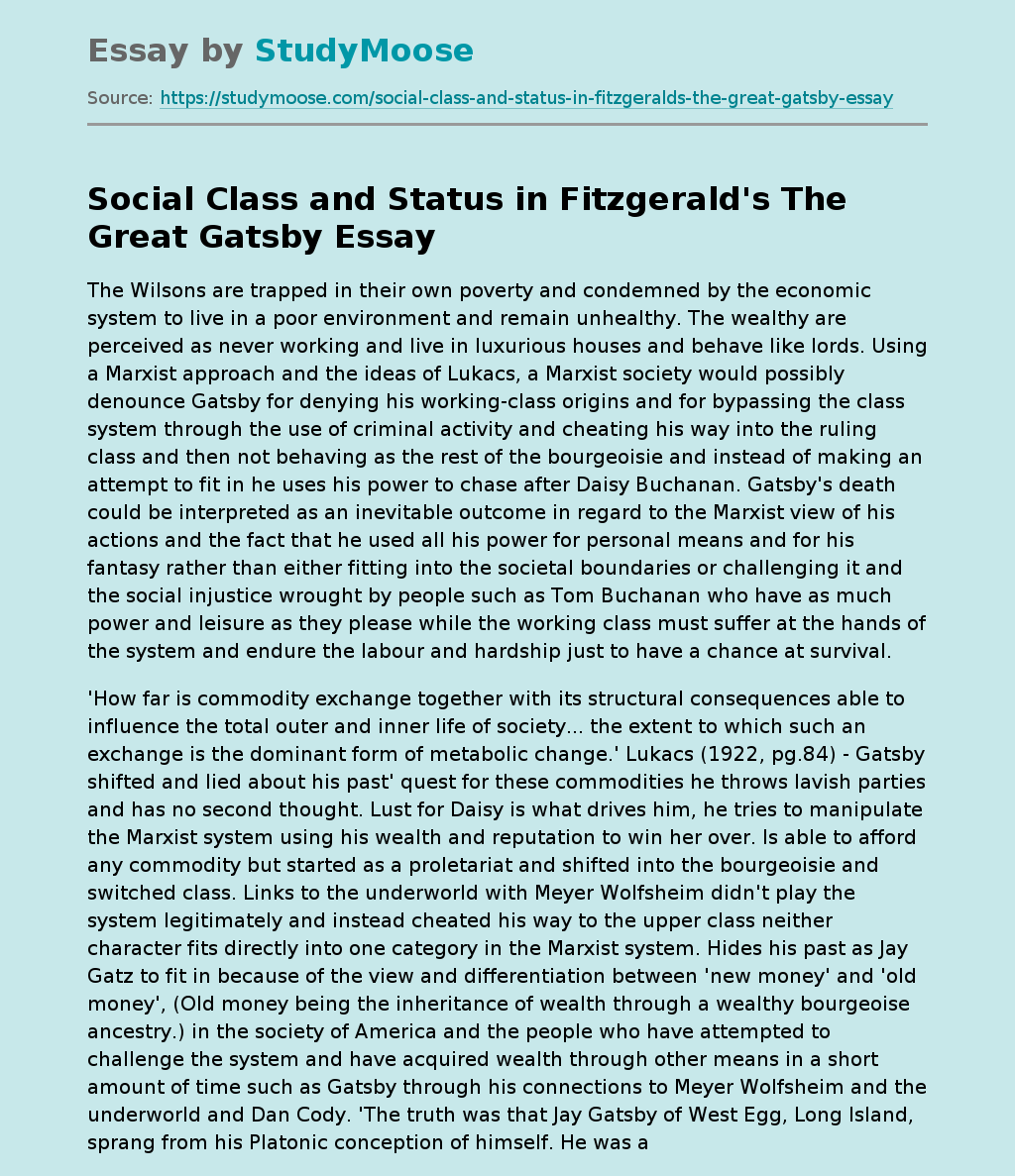