Downloads: 30
Views: 301
Read the scenario below and answer the question that follows.

An angel wants to guide an unlucky character to a place of hidden fortune.

Which structure would Shakespeare use for this scenario?

rhymed iambic pentameter
Read the scenario below and answer the question that follows.

Tim is the king of the Kingdom of Tragedy. Quick-tempered and unkind, he admonishes the faults of his staff and takes no responsibility for his mistakes and errors. He rarely relates to his people. He is proud and is eventually deposed from his throne when his people revolt.

Don't use plagiarized sources.
Get Your Custom Essay on Skills Lesson: Tragedy, Drama, and Shakespeare Just from $13,9/Page

He flees the kingdom and escapes into exile in the Kingdom of Comedy.

Does this character fulfill the characteristics of a tragic hero? Explain your answer.

Tim does not meet the requirements of a tragic hero. Though he is of noble status as a king, Tim does not relate to his people; rather, he asserts his superiority and power over them. He does, however, possess the tragic flaw of hubris (excessive pride).

However, the audience needs to empathize with a tragic hero; Tim’s attitude and temperament do not make him sympathetic, especially when he is deposed as a result of it.

1. The hero is virtuous and of high status, or noble character.

3. The hero must possess “hamartia,” or a tragic flaw that contributes to the downfall. A common tragic flaw is “hubris,” or excessive pride.

4. The hero’s downfall leads to “recognition,” or a new understanding that had formerly been overlooked.

Read the scenario below and answer the question that follows.

During a play, Emily needs to convey her innermost thoughts about her deep love for Richard. She moves to her bedroom on the stage, away from the ears of other characters. The audience listens as she begins to express her emotions in a speech.

Which type of speech fits this scenario best?

Read the scenario below and answer the question that follows.

During a play, the audience learns from a dialogue between two characters that they planned a surprise birthday party for another character, Lucy, on her day off from work. In the next scene, Josiah, a coworker of Lucy’s, asks her to work his shift for him. She accepts. Lucy will now be working on the day of her surprise party!

Which literary term does the scenario above illustrate?

dramatic irony
Read the excerpt below from act 3.2 of The Tragedy of Julius Caesar and answer the question that follows.

ANTONY:
I am no orator as Brutus is,
But, as you know me all, a plain blunt man
That love my friend; and that they know full well
That gave me public leave to speak of him.

Is this excerpt written in blank verse or prose? Explain your answer.

This example is written in blank verse. Blank verse is defined as a verse form using unrhymed lines of iambic pentameter, with intial capitalization. Each of these four lines fits that description. Prose has no defined meter, which eliminates this passage from being labeled prose.
Based on what you’ve learned during this lesson, why is it important for a drama, especially a tragedy, to address a theme?
Drama has a special relationship with its audience. Since the audience is engaged in the action by observing the live play, they witness firsthand the imitation of life and life lessons. Due to the serious nature of their content, tragedies cannot escape being instructive; they warn against regrettable behaviors and the effects of pride.
Read the scenario below and answer the question that follows.

The protagonist talks aloud to the audience, without other characters’ awareness, about her secret love for the antagonist.

Which structure would Shakespeare use for this scenario? 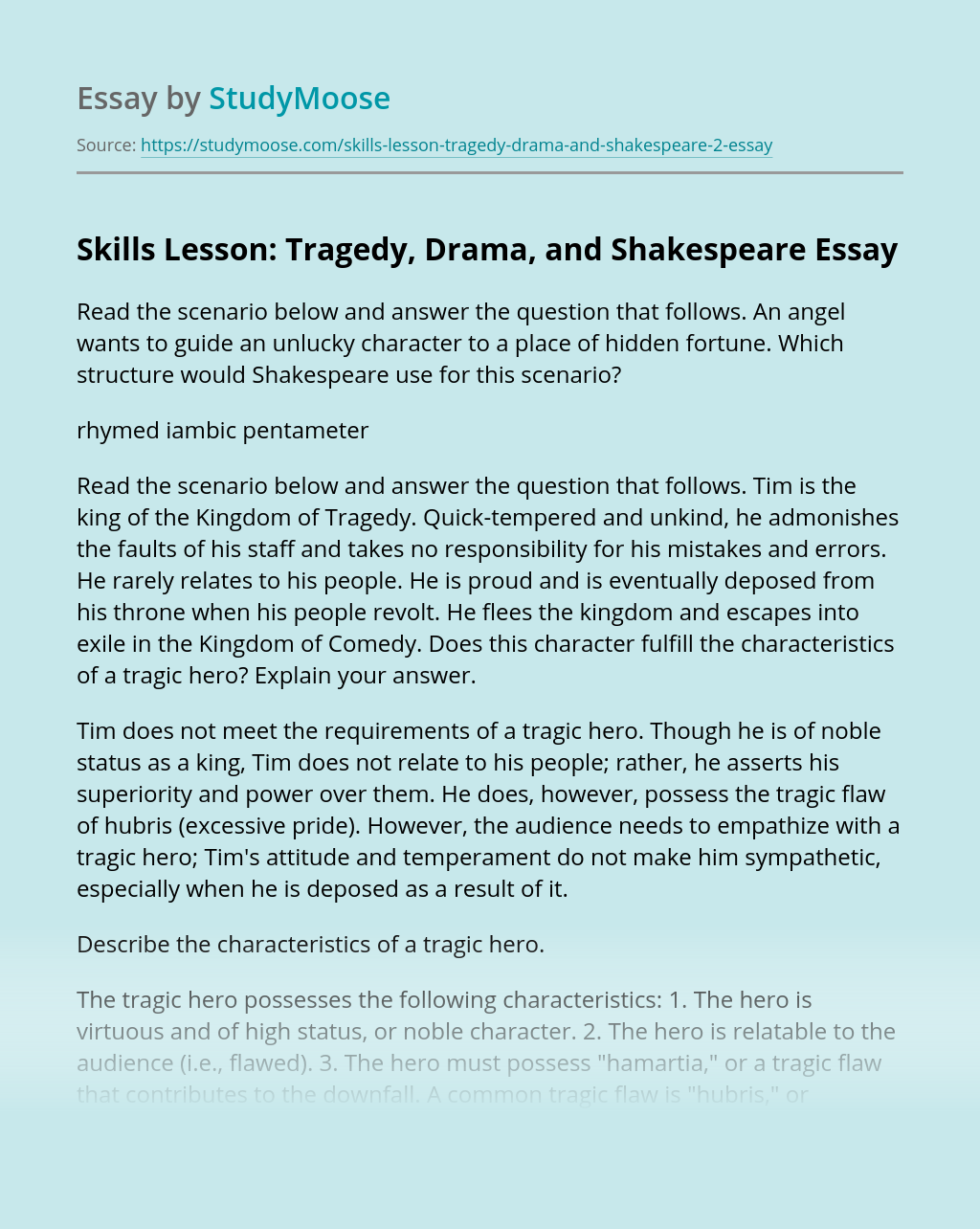 The Accuracy and Authority of Web Documents

Accuracy of Web Documents 1. Make sure the author provides an email or a contact address/phone number. Who wrote the page and can you contact him or her? 2. What is the purpose of the document and why was it produced? Some webpages are produced for commercial, education, humor, advertising, commercial, and government based. 3.... VIEW ESSAY

The relationships between grandparents and grandchildren vary within every family. Some families develop strong relationships with their grandchildren, while others are seemingly unrecognized by one another. For this interview, I was hoping to come into contact with an individual who has maintained a healthy relationship with his or her descendants. Originally I was going to... VIEW ESSAY

“It is bread we fight for, but we fight for roses too. ” This quote, originally in a poem written by a man named James Oppenheim, embraced a fierce social movement created by large number distraught textile workers who eventually created what we now know as the “Bread & Roses Strike”. This strike proudly showed... VIEW ESSAY

The International Stress Management Association conducted a study which conveyed that for Londoners, the journey to work is the most stressful daily activity, exceeding the stress of being at work. What I believe makes a project great is it’s potential to have a significant impact on individuals as well the wider community, to not only... VIEW ESSAY

Ok, so the topic on my card is to describe a library that I visited, and I suppose I would like to choose the library in my college, which is a landmark in my campus. Now going on to my next point which is what it looked like, from the google map when you overlook... VIEW ESSAY