Should Marijuana be Legalized or Not

Marijuana or others know as Cannabis, is a psychoactive drug that is mainly used for recreation or medicinal purposes. Marijuana can cause paranoia when used with high dosages, yes like all drugs it has a dosage and can also be very addictive which is why many people who tried it the first time would want to try it again. In light of the term drugs, it’s a substance that affects your central nervous system or can also be used for diagnosis.

Don't use plagiarized sources. Get your custom essay on
“ Should Marijuana be Legalized or Not ”
Get custom paper
NEW! smart matching with writer

All medicines are drugs but not all drugs are medicines, one example of that is crystalline meth or meth for short. Although meth has some slight medicinal capabilities, it’s very discouraged because of its addictiveness and harmful long-lasting effects. Unlike meth, marijuana has a very high success cases for its medical application. But as any other drug, Marijuana causes a high that depending on your method of intake, will last for 3 hours or more. It releases dopamine which is a hormone that is also released during intake of food or when engaging in sex.

Sounds like a lot of fun but Marijuana is very dangerous, it has to be used on a controlled environment or with proper attendant.

Marijuana may have a negative impact when taken in great dosages, but they contribute greatly in specific illnesses in the medical field. The Food and Drug Administration (FDA) allowed the use of Marijuana for treatment for two rare forms of epilepsy; Dravet and Lennox-Gastaut Syndrome. Nausea and vomiting from chemotherapy are treated using dronabinol and nabilone, these are two man-made cannabinoid medicines approved by the FDA.

There are approximately 100 chemicals called cannabinoids in the marijuana plant which has various effects on the body. Cannabinoids are identical to the chemicals that body produces which involves appetite, memory, movement and pain. The “high” people feel when they consume marijuana is produced by the chemical delta-9-tetrahydrocannabinol and cannabidiol. THC and CBD may offer different benefits as they are present in different levels and strain of marijuana. CBD is best used for easing pain while THC is best for handling nausea. It is used to treat medical conditions such as Alzheimer’s, cancer, Crohn’s disease, epilepsy, muscle spasms and more. Although Bonn-Miller stated that not all the stated conditions are proven to be helpful for the human health. The greatest evidence for the therapeutic effects is its ability to reduce chronic pain. It can be orally consumed or smoked. It is sold as creams, sprays, dried leaves or buds and edibles like candies. The Drug Enforcement Administration (DEA) is considering marijuana to be reclassified as a Schedule II drug like Ritalin or oxycodone but kept it as a Schedule I drug. There are 33 states and the District of Columbia that legalized marijuana while there are 11 states that legalized marijuana restrictively. To get marijuana, a prescription or written recommendation must be shown from a licensed doctor. It must state a condition that meets the need for marijuana as a medical use.

Though we might say that marijuana is a medicine, but some people use it not in medicinal use but in recreational use, based in 2015, according to Dangerous Drugs Board from their data in rehabilitation center, there were about 25% who uses marijuana. From that we can say that people use it for their pleasure and enjoyment. From that statistic, one-fourth around metro manila uses marijuana and if that so, how about the other provinces nor region; the number of users? Could possibly higher than the number of people who uses in the case of users in metro manila? It has many effects on people who uses it like increased heart rate, increased risk of stroke, problems with coordination, antisocial behavior including stealing money or lying, poor school performance and higher chance of dropping out etc. It could also affect our mental health according to Northwestern University’s study that marijuana users have abnormal brain structure and poor memory that may lead into brain changes and according to American Medical Association that using this substance in adolescence may cause in poor neurocognitive performance and affects the IQ, and would increase a rate of anxiety, mood and psychotic thought disorders. Some country like Amsterdam had tried to legalize Marijuana, but as months goes by, they could see its effect on people, specially to their children who were using it and had been found that crimes were centering around places where marijuana is sold. Even millennials are using this kind of addictive thing, because of peer pressure, family and many factors. We can say that it might be a medicinal use, but people nowadays and huge number of people are using it for recreational use not for medicinal use.

The positive effect findings from my first source were quite typical of what one might have heard of the drug. Some of them are: feeling relaxed, feeling happy, getting munchies (may also be considered negative), increased enjoyment of music and art, more appreciation of the surroundings, forgetting care and worry, better imagination and visualization, increased creativity, as well as more enjoyment of sexual activity and increased excitement (Hammersley, R & Leon, V. 2006). The findings of negative effects were also quite typical of what one might have heard, which would include: forgetfulness, over-sleep, not getting things done, concentration difficulties, neglect of work or duties, loss of balance or dizziness, problems with performing tasks, and nausea (Hammersley, R & Leon, V. 2006). Several facts have been concluded from these findings. The main conclusion appears to be that when used casually, the positive effects of marijuana are considered negative; the source states that ‘Cannabis users generally enjoyed it and found it beneficial to them, but at times they experienced cognitive function and mood disturbances, including disorientation, depression and anxiety (paranoia)’ (Hammersley, R, & Leon, V. 2006). They found that in casual users the effects, either positive or negative, only lasted during the intoxication period and sometimes during the following day, and that as long as the use remained casual rather than heavy, the effects would not be problematic.

Marijuana is a very controversial issue with a lot of information being disseminated, both for and against it. The subject of marijuana affects everyone, whether they know it or not, because of the millions of tax dollars spent fruitlessly on drug war and the prohibition of marijuana, with almost no conclusive impact on cannabis cultivation. The truth about marijuana needs to be brought to light so that people can decide, with an educated opinion, whether or not the positive effects of marijuana are negative. Between the anti-drug activists, who would say anything to make marijuana seem like an evil life taking tool, and the pro-drug activists, who seem to think it’s a plant that was sent down from heaven to save mankind, the actual facts and data can be distorted and distorted. So, at the end of the day, it’s hard to separate the fact from fiction. More and more, you see new stories about the legalization of marijuana with activists from both sides arguing their case.

Hence, we concluded to a common ground in which Marijuana may be used for medical needs on a condition of having legal or proper prescription that a person shall need it. Having this policy may allow us to maximize the benefits of Marijuana in terms of health aspects. It may also filter those people who only consume it for other unnecessary recreational use. It is true that we may be to able to access the use of Marijuana, however, we must mind the moderation of usage and focus only in its main objective and function.

Should Marijuana be Legalized or Not. (2021, Aug 04). Retrieved from https://studymoose.com/should-marijuana-be-legalized-or-not-essay 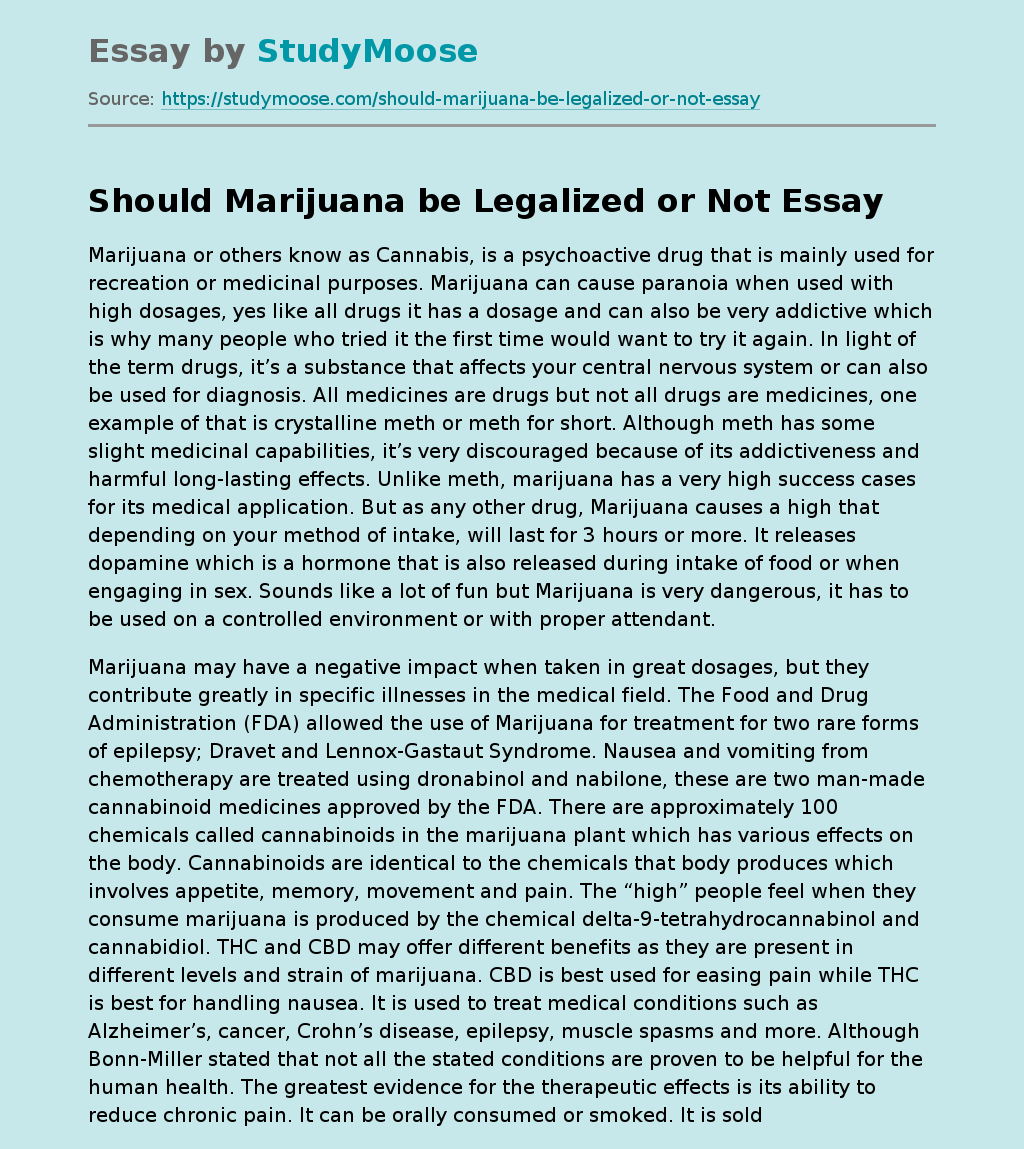