Should College Athletes be Paid in the US?

For millions of Americans, college game day is strictly designated for being glued to the television all day, covering themselves head to toe in fan gear, or anxiously waiting for the gates of the stadium to open so they can enter and watch their favorite team be victorious. For the universities, and especially the National Collegiate Athletic Association (NCAA), it is just another day of business and opportunity to produce income off the talented athletes who participate faithfully for their schools.

Don't use plagiarized sources. Get your custom essay on
“ Should College Athletes be Paid in the US? ”
Get custom paper
NEW! smart matching with writer

The fact that the NCAA, which has become a multi- million dollar company over the years by benefiting from the success of these amateur athletes, does not allow those same athletes to receive any sort of compensation for their hard work is unjust. The issue of whether or not college athletes should be paid in any way for their performance on the field or on the court has been extremely controversial, due to the fact that both sides of the argument have convincing evidence.

However, due to the large amount of profit that universities and the NCAA receive solely from the success of their athletes, it would be highly beneficial as well as fair to allow payment of these college athletes. One of the biggest concerns against paying college athletes is simply the fairness of how the payments would be distributed. It would be extremely difficult to determine whether or not a well known star quarterback for a nationally ranked team should receive a higher amount than a teammate that mostly sits on the sidelines without causing controversy.

Every athlete, no matter what his or her playing status or rank may be, is going to argue that individually it is fair to receive a decent amount of pay and would be outraged if another player was to receive higher based on general popularity. The same issue of fairness can be related to the fact that not all universities can afford to pay their athletes and “it would be a burden for the majority of schools that don’t profit from athletics (Cohen). In an interview conducted by Matt Norlander, a sports writer for ESPN, Jim Boheim, the head basketball coach at Syracuse University, provides hard evidence of how the profits from the basketball program are distributed throughout the school leaving nothing extra to be handed out to the basketball players of this high ranked basketball team. Boheim explains that “We make no money at Syracuse University in the athletic department. Zero. We’re lucky if we break even at the end of the year.” Based on this first-hand knowledge of non-existent funds in the athletic department at a decent sized university, one can only imagine the type of struggle that a small junior college or even a less successful larger university would have if the payment of players was to be condoned. Not only is the inequality of distributing funds to all players an issue, but distributing funds to all sports becomes a problem as well. If a university has a nationally ranked football team with fifteen national championship wins and a head coach that gets paid millions of dollars each year, and then has a non ranked baseball team that hasn’t won a game in four seasons, with a coach that works on a minimum salary, it is obvious that the football program provides higher financial benefits. Because of this, there would be a huge disagreement between the various sport departments because some of the money earned by more profitable sports would have to be distributed to other sections of the athletic department.

There is also the argument against payment that athletes already receive so much from the university and are compensated enough so that there is no need to give them more than what they already have. When an athlete receives a scholarship to play for a university, he or she is blessed with an opportunity to go to a well-known school, do not have to worry about tuition, are provided with room and board, and receive some the of best athletic training in the country. Athletes receive full scholarships based solely on the fact that they have a talent for whatever sport they are being recruited for and some believe that if the only thing an athlete has to do is go out on the field and make sure that the team , then a full scholarships should be enough compensation. In the same interview with Norlander, Boheim voiced his opinion and elaborated on how lucky the college basketball players that he works with are to be able to have such an honorable opportunity that could greatly benefit them in the future. Boheim explained that “If they’re really good, they get to develop. They get the opportunity to play in the NBA. They make a lot of money or they play in Europe and make a good amount of money. And if they’re not quite that good then they get free college education.” From that perspective, it is hard to argue that athletes deserve any more than what they are already given and should be grateful that they have an opportunity that very few are able to obtain. Even though the argument against paying college athletes has its strong points, the arguments for paying them greatly challenge any opposition, due to the disadvantages they are faced with without being able to receive pay. Although an athlete on full scholarship receives many accommodations, “those who favor some form of payment have one argument on their side: attending college itself does not require students to make a vow of poverty” (Cohen), and unfortunately, many athletes are faced with the struggle for personal spending funds.

When athletes aren’t playing in games, they are either at practice for multiple hours a day, attending class, or working on school work which leaves no time in their day to be able to obtain a part time job like many other college students have the opportunity of doing. What most people don’t really understand is that “a scholarship doesn’t equal cash in a player’s pocket”(Hartnett), and the most important thing to realize is that the only thing keeping athletes from being able to provide for themselves,is their dedication to their team. Tyson Hartnett offered a solution that is fair by suggesting that if each athlete got $2,000 paid over the course of the semester, this would give him or her some spending cash and an opportunity to start managing their money, which is essentially what normal college students have the responsibility of doing. Because athletes have made the choice to sacrifice their free time in order to benefit their own team and the university, it is only fair that they receive some sort of reasonable payment or “in the meantime, if they cannot be paid outright, surely the scholarship athletes should be able to engage in entrepreneurial pursuit” (Wilbon). As of right now, athletes have a huge disadvantage in being able to pursue any type of entrepreneurship without being greatly penalized for it: “A student cellist can take a salary from a local chamber orchestra, for instance, while a promising golfer might major in economics while playing PGA tour events and cashing checks for Nike. But when a student puts on a uniform with the schools’ name, the story is different”(Cohen); however, there is no reason an athlete should not be presented with the same opportunity. No matter how the situation is looked at, it is hard to argue that it is fair in any way that “top NCAA executives are getting $1 million per year while an athlete can’t earn $50 from signing a few autographs”(Hartnett). The number of benefits that are produced by successful athletes are key factors in the success of the their school as well as the NCAA. Just by producing a good game to watch and earning the love of millions of Americans, “athletes earn their schools hundreds of thousands of dollars, increase enrollment, and if they do well, provide recruiting piece for generations”(Hartnett). The amount of revenue that the NCAA takes in each year purely from the rights to televise games that involve some of the best athletes and teams in the country is a shockingly high number. Michael Wilbon reported that “$11 billion deal- ok its $10.8 billion to be exact- between the NCAA and CBS/Turner sports for March Madness between 2011 and 2014.” The NCAA is receiving close to $11 billion just to have the rights to televise a three week long basketball tournament whose only participants are college athletes; however, the athletes never see a dime of that money that is produced.

College athletes are greatly exploited by their universities and as of right now it is unfortunately acceptable to do so since athletes don’t receive any benefit from what they help to produce. Athletes will receive praise when they perform well, criticism when they don’t, and are brought to the university to mainly be an athlete more than a student, which can cause student athletes to be put in unpromising situations if the smallest thing were to happen: “Once you get a sport involved, there are politics, injuries, and a call to the office to tell a player, thanks, but we don’t need you on this team anymore”(Hartnett), and since players are sometimes forced to take classes that are easy and won’t interfere with sports, their education doesn’t give them much security for the future if a serious injury or other force were to prevent them from continuing with a career in sports. Even after all of the hard work and dedication, “the players have become employees of the university – employees without compensation” (Wilbon). The fact of the matter is that college athletes, no matter what their playing status may be, produce a great amount of success as well as income for their schools and it is only fair that they receive some of that financial success in return. If an athlete is a star player, then he or she should be paid as a star player, or at least should be able to benefit from the income that the NCAA and the university benefit from when using that athlete’s name for profit. When the facts are presented to show what little extra that athlete’s receive for their hard work, the argument for pay becomes more justified because, “I’m interested in seeing the people who produce the revenue get a teeny, tiny, slice of it”(Wilbon).

Should College Athletes be Paid in the US?. (2016, Feb 27). Retrieved from https://studymoose.com/should-college-athletes-be-paid-essay 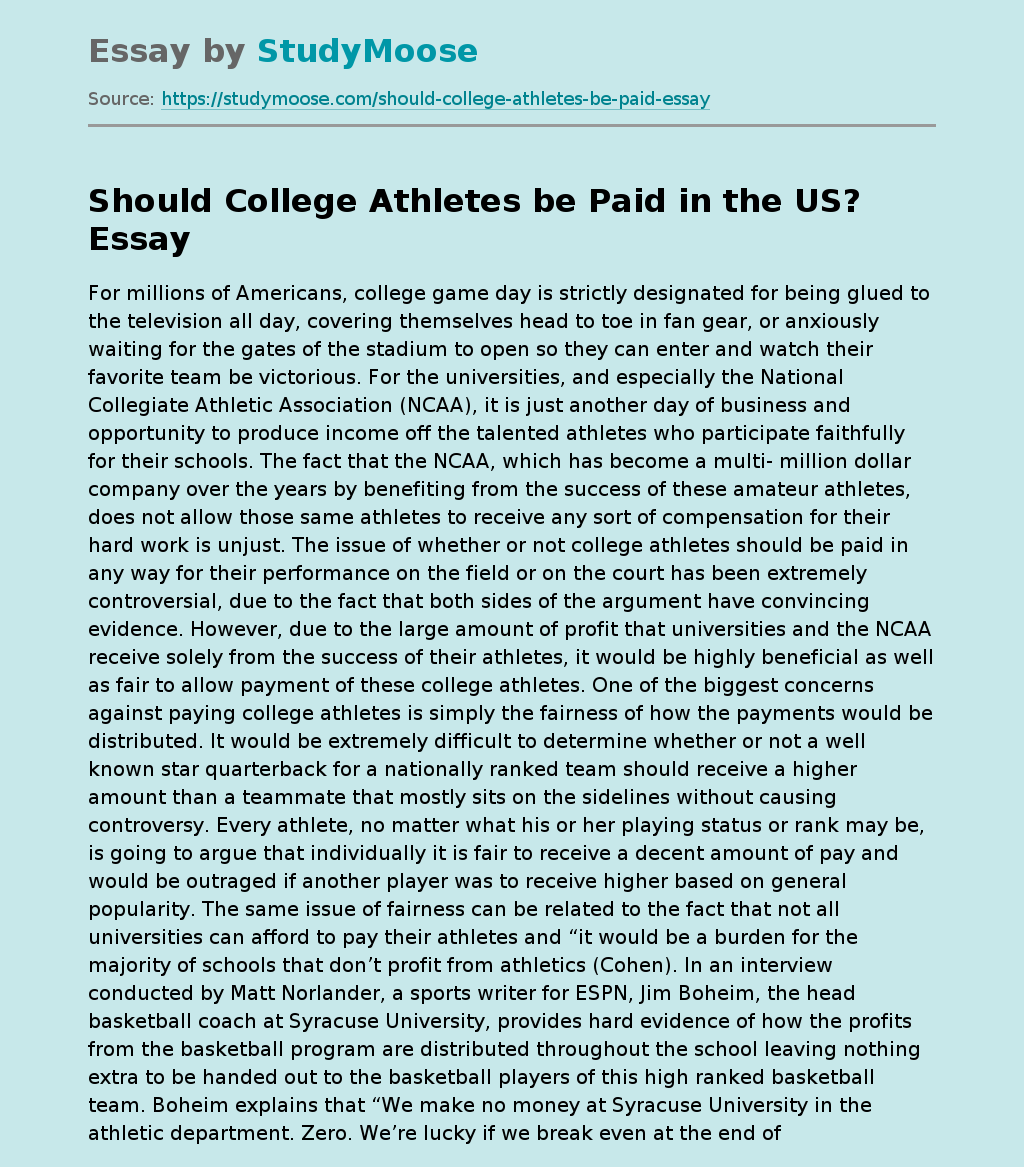