Should Boxing Be Banned?

For many years there have been sporadic calls for boxing to be banned, these are often put forward by medical associations of some kind after a boxer has died from injuries sustained during a fight, the most common of which is the BMA the British Medical Association. Here are some reasons why boxing shouldn’t be banned.

Boxing has responded over the years to these calls about banning boxing by making alterations to the thickness of gloves, outlawing some types of punches e.

Don't use plagiarized sources. Get your custom essay on
“ Should Boxing Be Banned? ”
Get custom paper
NEW! smart matching with writer

g. blows below the waist have recently been banned, instructing referees to stop fights earlier, enforcing better medical supervision and reducing the number of rounds.

Boxing does not have the highest per capita number of injuries or deaths, there have been three hundred and sixty one deaths worldwide since 1945, which is a very small amount compared to other sports. Supporters of boxing point out that the contestants are making an informed choice to get in the ring and that no one is forced to do it or forced to watch it.

I cannot see why boxing should be singled out when an activity such as mountaineering is many times more likely to produce a fatality. I feel that banning boxing would be an unjustifiable draconian step and that the sport would in any case go underground. Given that boxing has such a huge following throughout the world.

Boxing is a world entirely unto itself and if they were to ban it then they would be banning a way of being because people that box for a living have nothing else and getting in the ring is the only way in which they can express themselves.

Boxing has helped a lot of people have a very wealthy lifestyle in which they probably wouldn’t have had if it weren’t for boxing; the most famous boxer to go through this was Frank Bruno. Bruno grew up as a boy in a very poor family and he had nothing, and if it wasn’t for boxing he wouldn’t have had such a good life, boxing won Bruno huge amounts of money and fame which enabled him and his family to have a very comfortable lifestyle. Boxing is a great character builder, it instills discipline, respect, inner motivation- there are so many positive sides, which actually out weigh the negative sides. There are just some of the reasons why boxing shouldn’t be banned. Here are some reasons why it should be.

The main reasons for banning boxing are mainly medical reasons; that have been put forward by the BMA.

There is no rational argument for permitting boxing. Allowing two men or women stand toe to toe punching the living daylights out of each other for the enjoyment of others is insane and barbaric. The thing that is uniquely bad about boxing is that the whole purpose of the sport is to inflict brain injury on your opponent, to destroy brain cells. In the case of boxing, the BMA’s arguments cannot be resisted. Boxers’ brains are reduced to mush by the constant pounding, this constant pounding can cause slurred speech and slowed movement for life which is known as being ‘punch drunk’, fifteen to twenty percent of boxers end their career punch drunk.

Also this constant pounding on the head can trigger future Alzheimer’s disease and also Parkinson’s disease. Muhammad Ali, the most famous boxer of all time has been diagnosed with Parkinson’s disease and many people assume that this was brought on by his numerous ‘wars’ in the ring. Other American greats such as Jerry Quarry cant remember what happened yesterday due to the amount of blows to the head, a boxer can receive hundreds of blows to the head in one single bout, and a neurosurgeon has claimed that 80% of all boxers have brain scarring as a result of the cumulative effects of blows.

Most boxers don’t even get rich out of it; the game is littered with great champions, notably Joe Louis, who ended up penniless. Promoters and TV companies cream off most of the money and earnings, which is totally wrong. Many fights are, in effect, fixed: nine times out of ten, the winner will be known in advance because the matching is so precise. Boxing is a dangerous sport and there are long and short-term dangers and they will never be eliminated, people can try and outlaw certain punches especially punches around the head but if you outlaw those punches, the sport will become stupid, because boxing without punches to the head is like motor racing with fifty mph speed limit, so banning punches to the head is a ridiculous idea because the sport would be at a loss without those punches.

My opinion is that I think that boxing should not be banned because the boxers know how dangerous the sport is and they are making an informed decision to go out in to the ring and fight, they are not pressured into doing it by anyone. Also I think that there is no point in outlawing headshots, I think if they are going to do that, then the sport might as well be banned because it will lose all its interest.

Should Boxing Be Banned?. (2017, Sep 29). Retrieved from https://studymoose.com/should-boxing-be-banned-2-essay 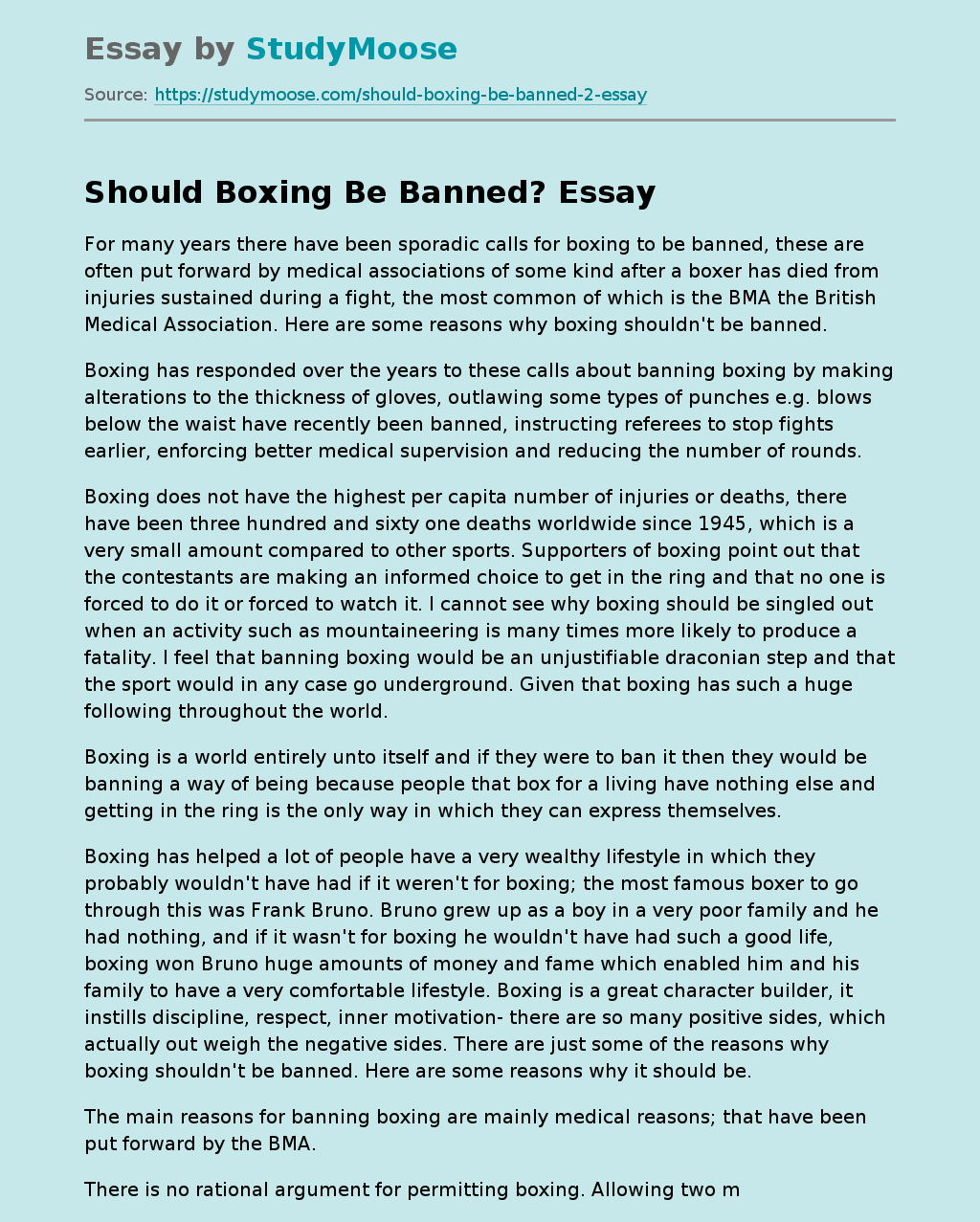