Sherman Alexie's "On the Amtrak from Boston to New York City"

It does not seem hard to understand the basic theme that is present in “On the Amtrak from Boston to New York City” by Sherman Alexie. Many Native Americans today are forced to assimilate into the American culture leaving behind their traditions and values in order to be successful in America. If they do not become Americanized many Native Americans struggle to survive on reservations. Sherman Alexie portrays the bitterness for having to put his traditions aside perfectly in my mind.

Don't use plagiarized sources. Get your custom essay on
“ Sherman Alexie’s “On the Amtrak from Boston to New York City” ”
Get custom paper
NEW! smart matching with writer

Although I will never receive the treatment the he or his ancestors have, I can still understand his pain. He is being “forced” to be someone he is not, which everyone has to do at some point in his or her life.

It is not easy for a person who considers himself a full-blooded American to relate to a Native American who lives in a country that is full of people who’s ancestors basically wiped out your entire civilization.

I can understand what he is going through somewhat. He is stuck in this country, this is his “home” weather he likes it or not. Obviously, things will never be like they were before the first settlers landed. The setting of the poem, an Amtrak train for Boston to New York, I believe is very significant. The New England Area, especially by Walden Pond in Massachusetts is near where the firsts settlers land. It is the site of our civilizations beginning and the Native American civilizations end. It was the site of the beginning of the end for the natives of what today is the Untied States of America.

Its one of the biggest tragedy’s the world has ever seen. Some their traditions however, are still possessed by today’s Native Americans.

They are however being threatened by today’s culture which is dominated by material items. Many Native Americans are leaving the reservations and some of their traditions behind in search of jobs to support themselves and family. The main character of the poem seems to be sick of attitude. He is sick of Americans who ignore the history of those who were there before them. This is evident throughout the poem. They main character is very influenced by his heritage. He would not have such strong thoughts on the train about the American historical objects being pointed out by the woman. It seems to me that this man wants nothing to do with America and its history.

However, he can’t get away it. American culture consumes his everyday life. He has to not be himself very often. He has to act fake to appease those around him. I like many others in this world have been guilty of this same act. This character is perfectly politically correct. He tries not to confront anyone, which is not a bad trait. Unfortunately, that is not who he really is. However, his Native American upbringing has instilled in him a deep respect for elders. A characteristic that our culture lacks teaching to its young sometimes. He, like many of his kind, is very honorable and respectful of those who deserve respect.

“On the Amtrak from Boston to New York City” was honestly one of the best poems I have ever read. It is about a subject that I have not put much thought about. However, after reading this piece I will put a little more thought into the subject to try to put myself into the shoes of a Native American trying to live in America. This is their “home” but it’s not really their home. That is the way I see it. Many are forced to live lives they are not supposed to live. Many struggle everyday to survive to keep their culture alive. This is a struggle they are losing. Many Native Americans are forced to leave the reservation in search of better education and a better life.

Sherman Alexie's "On the Amtrak from Boston to New York City". (2016, Jun 21). Retrieved from https://studymoose.com/sherman-alexies-on-the-amtrak-from-boston-to-new-york-city-essay 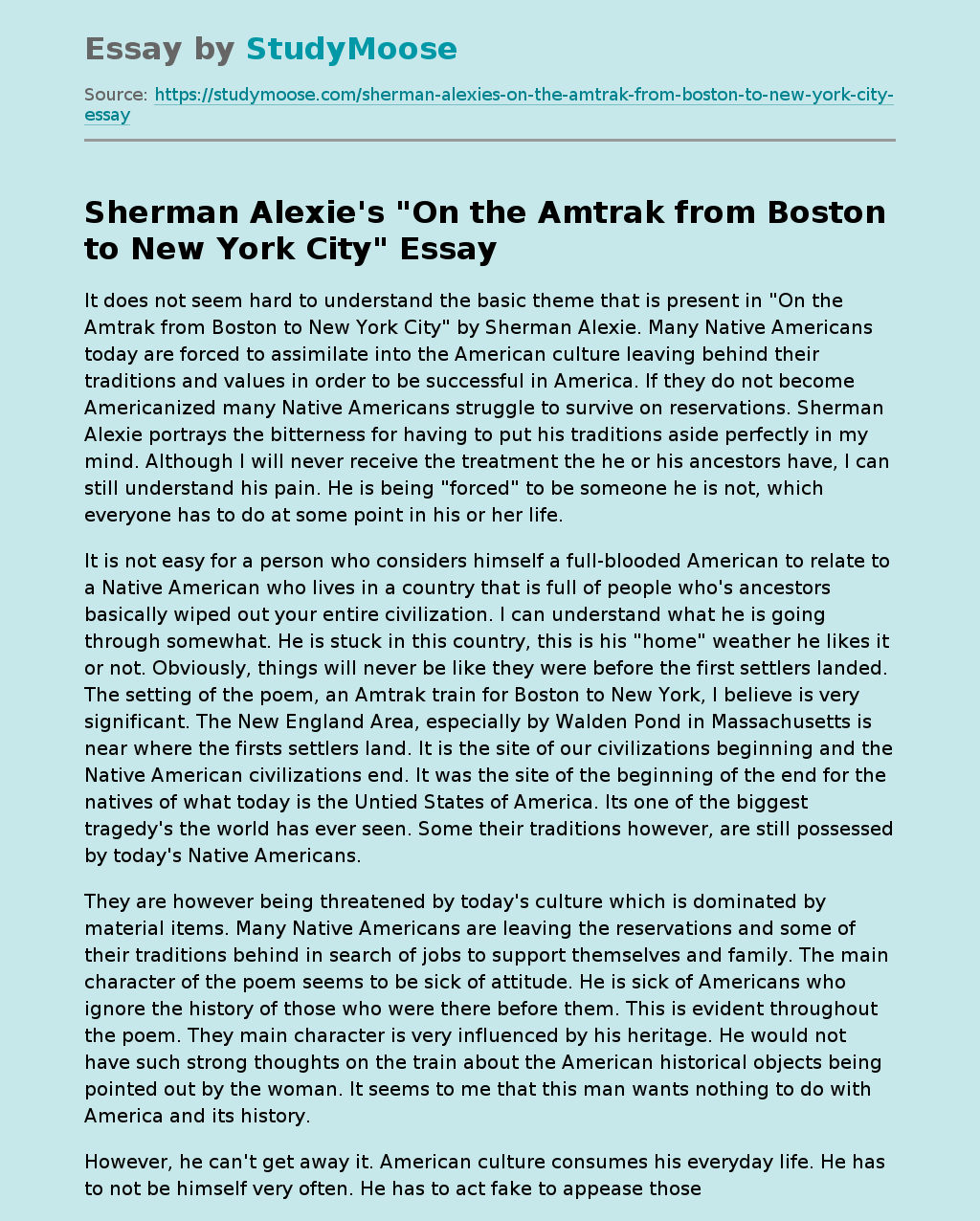