In modern western society, advertisements dominate our culture and consumer affairs. We are bombarded with thousands of advertisements everyday, which become a part of our everyday lives. Culture determines the taste of consumers, advertisements is a tool to sell products to the general public that were influenced by our cultural trends. This could be telling us how to feel, what to like and what to buy and fulfilling those cravings by presenting us a product. Everyone knows the saying ‘Sex Sells’.

Advertisers use this attribute and try to associate their products with sexual imagery hoping to get attachment to consumers subconscious mind.

Structuralism is a theoretical method and a way of thinking about and acting in the world concerning with the perception, description, and manipulation of structures The social world has an underlying structure that can be revealed, one way to reveal this structure is by semiotics (Joshi, February 29, 2012). Semiotics is the study of signs that construct a meaning. A Swiss linguist, Ferdinand de Saussure first derived the theory of semiotics. Semiotic analysis was created to study communication and language.

Saussure introduced two concepts that signs must have, a signifier and a signified. The signifier is the physical form of the sign; it’s the component that delivers the message. The signified is the mental image associated or idea represented by the sign (Joshi, February 29, 2012). In addition, semiotics can be divided into two basic levels of analysis. First being diachronic, a macro level of analysis which looks at the arrangement of elements in a system at a single point in time. Second being synchronic, a micro level of analysis that examines the historical development of languages.

For the purpose of this semiotic analysis, I will be conducting a synchronic level of analysis because the advertisement comes out of magazine. Semiotic analysis was created to study communication and language. It has two different levels of classification, denotation and connotation. Denotation is the definitive/literal meaning of the sign. Roland Barthes, a cultural theorist, expanded the cultural theory of denotation by introducing the concept of connotation. Connotation is the secondary significance of a sign and is defined as personal or sociological associations of the sign.

In the denotative level, the primary signification is considered to be the literal or surface meaning of a sign (Joshi, February 29, 2012). In this advertisement, there are many signs available. As stated above these signs are made up of signifiers and the signified. The signs that are presented in this advertisement are all examples of iconic signs. Icons are is mode in which the signifier is perceived as resembling or imitating the signified (pictorial representations) (Joshi, February 29, 2012). This advertisement contains a sign that is presented of a woman licking an ice cream cone.

The sign, ‘eating’ has the signifiers of the letters that form the word, ‘e-a-t-i-n-g’. The signified would be to put something into the mouth and swallowing (New Oxford Dictionary). Lastly, the sign I want to present in this analysis is ‘only’. The signifier would be the letters that form the word, ‘o-n-l-y’. The signified would be no one or nothing more besides (New Oxford Dictionary). The connotative level is the secondary signification of the sign. It is a reflection of personal/symbolic preferences associated with the sign (Seale 273).

In the connotative level, the sign of ‘woman’ (from the primary signification, denotative level) now becomes the new signifier. It now has a new meaning attached to it. The new signified would be a Caucasian woman preforming a promiscuous act (oral sex). She is being objectified and is portrayed as a sexual object. The woman in this ad is used to attract men, and by buying this product and being clean, women are most likely to do to perform sexual acts for you. The sign of ‘ice cream’ is now the new signifier in the secondary level. The signified would be a phallic symbol.

The ice cream is white perceiving that it is vanilla flavored. In the connotative level, one can perceive this as a representation of semen or association of race they are trying to market too. The sign ‘it’ becomes the new signifier in the secondary level. The signified associated with this sign also produces the phallic symbol. In the advertisement, the word ‘it’ is mentioned many times. It is also underlined and italicized in the statement made by the advertisers (“Keep it clean”). This manipulates the representation of the word to change its reflective meaning, thus emphasizing its significance in the ad.

The sign ‘eating’ also becomes a signifier in the second level with the signified of performing oral sex. ‘Eating’ meaning putting something in your mouth and swallowing is perceived as a sexual act in this advertisement. The sign ‘only’ becomes a signifier in the secondary level and produces the signified of implying to perform oral sex. It is a reference to the other signs of ‘eating’ and ‘ice cream’; she is not ‘only’ eating an ice cream cone but also implying the performance of oral sex. It is a subliminal message that illustrates oral sex.

Semiotics has types of codes as long as they reveal the structures of society. They are associated with fields constituted of signs (Joshi, February 20, 2012). There are four different types of codes: cultural code, linguistic code, aesthetic code and narrative code. Cultural codes are based on the understanding social rules in behavior (Joshi, February 29, 2012). The cultural code that is reflected in this advertisement is woman and the subjectivity of sexuality. Women are thoroughly sexualized and are guilty of eroticized depictions.

Women are often presented as desirable commodities, often being recognized for their beauty rather than their intelligence – objects for pleasure. The sign of the woman is relevant when relating it to the cultural code. We see this through her body language and the representation of her hands. The way she is licking the ice cream cone and has her eyes closed presents a promiscuous message. The cultural reference of the ‘feminine touch’, the way she is delicately holding the ice cream cone conveys the idea of her holding a phallic object.

One is never seen eating an ice cream in this way. It is not normal. The women’s body language becomes the product. A way in which women are dehumanized in common mass media images – a product for male pleasure and consumption. Aesthetic codes are based on social conception of what is beautiful and pleasing to the senses (Joshi, February 29, 2012). Through aesthetic code, one can determine women’s role in advertisement and its relation to what is true to life. In reality it is common to see interracial couples but is a growing issue in society.

Interracial relationships are based on social acceptance and the fact that the woman in this advertisement is Caucasian is white and the ice cream cone (phallic symbol) is white, it shows a dominant view of our society. Advertising is commonly known for depicting couples of the same race, if one would change that (ice cream cone was a different colour), it might not be accepted widely through our society. Linguistic code is the deployment of words to generate a meaning (Joshi, February 29, 2012). It is the written messages that define and describe what is going on.

This advertisement contains many slogans and text that is used to subvert the normative deal. The first slogan is located at the top of the advertisement and states that, “This is simply a picture of a woman eating a vanilla ice cream cone”. The second slogan is located in the middle of the advertisement; it reads, “Sure she is attractive, sultry even. But she is only eating it because it tastes good and it is hot where she happens to be. ” Both of these sentences have deep connotative meanings behind them.

Most people will interpret the image as the woman performing oral sex, which contributes to the argument that women are seen as sexual objects, even though the sentence states the opposite. Narrative code is how the image tells a story (Joshi, February 29, 2012). The narrative code is about the positioning of the signs on the page. Since the picture of the woman eating the ice cream cone is the biggest sign and is in the middle of the advertisement, it tells the main story of the advertisement. The slogans on the advertisement are both above and below the image of the woman. This centralizes and brings more focus to the woman.

The actual picture of the product is on the bottom right corner of the ad. It’s a small picture of the product, this illustrates that the focus is more on the woman than the product itself. The woman’s beauty and sexualized image will sell the product. In conclusion, the advertisement objectifies woman and they are depicted as sexual oriented objects. In today’s society, advertisements representation reflects and reinforces the ideology of sexism in society. That woman becomes objects of consumption in advertising. We use women in a degrading way; we use them for their beauty and are constantly sexualized.

This advertisement shows exactly that. The representation of the phallic symbol and the meaning behind it depicts oral sex. Through denotative meaning it is clear that the meaning of the word is literal. Nonetheless, the connotative level shows the girl in the advertisement is being objectified and is portrayed as a sexual object. In todays society the depiction of woman in advertisement has become the norm. She is not shown using the product, however she is served only as a decorative symbol. It is proven that sex does sell and captures attention because it has become a part of human ideology. 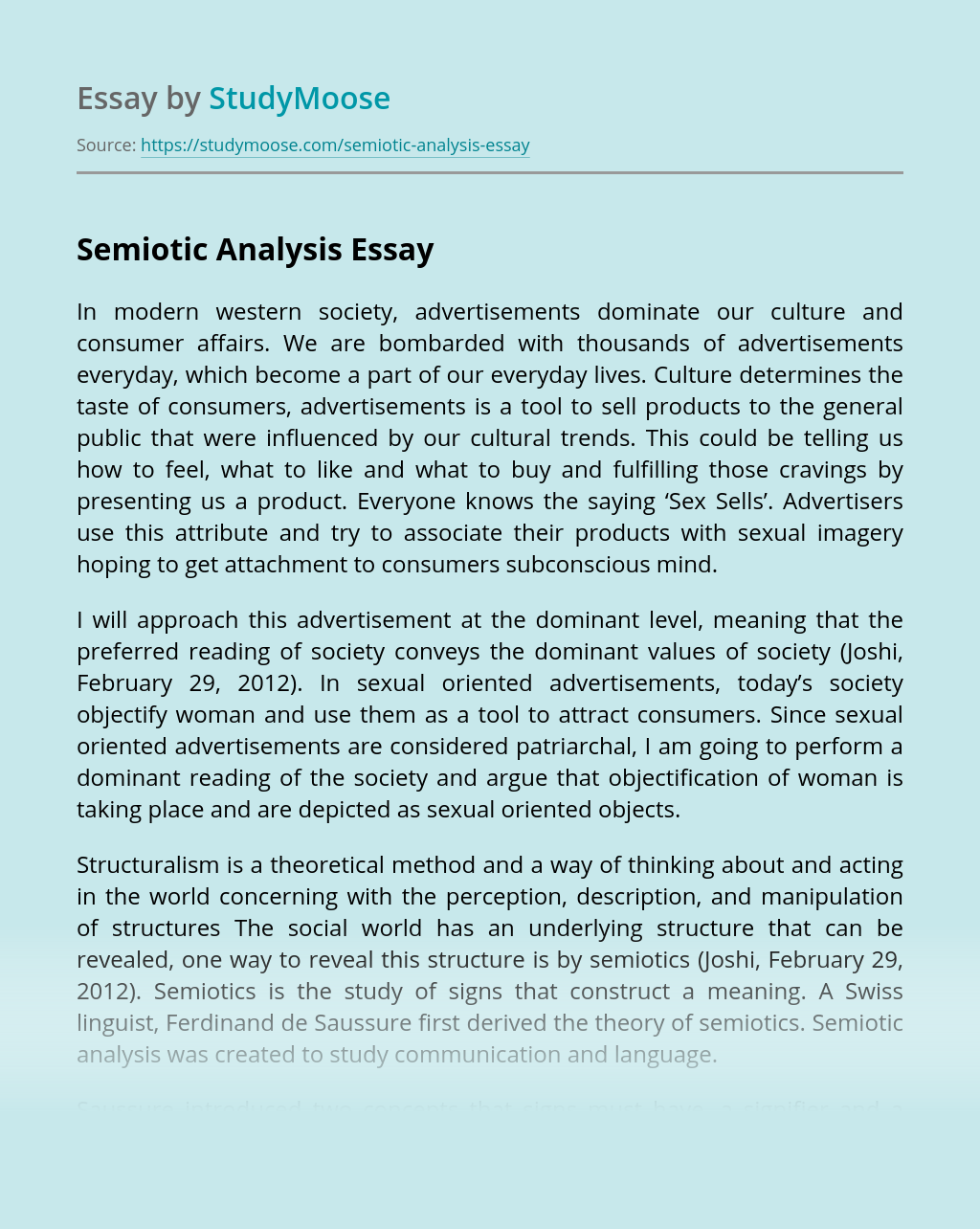