Self Image in The Blacker the Berry

The Blacker the Berry is a novel by Wallace Thurman and it’s a well-known novel from him. That tittle is part of an African American saying “The Blacker the Berry, the sweeter the juice.” Meaning that the darker the skin color of a black woman is, the tastier is their juice. The novel explores prejudice within the African American community. Emma Lou, one of the characters bears the “burden of blackness” every generation her family has been striving to become lighter.

Don't use plagiarized sources. Get your custom essay on
“ Self Image in The Blacker the Berry ”
Get custom paper
NEW! smart matching with writer

Throughout the novel, Emma Lou obtains several identities, which are placed upon her by herself, her family in Idaho, her peers in Southern California, and the community in Harlem. As a teen Emma Lou felt rejected by her family because of her dark skin, she identifies herself as the only black student in a predominately white student body.

Because of her dark complexion she thinks that she’s not important. While she was at home with her family she felt depressed and lonely.

Proficient in: Self Image

Her uncle Joe suggested that she should go to the University of Southern California. He believes that she would be able to find people who look like her. Additionally, Emma enters college in Southern California and meets other African Americans she soon discovers that her skin color makes her unpopular.

The men on campus identify her as “Hottentot” meaning a young woman who had pronounced African features. Likewise, she is rejected by society because her skin is not light enough. She moved to Harlem after college and there she seeks a new identity as a teacher.

Emma Lou tries to make her skin lighter, and it didn’t succeed it made her look worst even when she appeals excessive make up on her face. She gets into a relationship with a guy named Filipino Mulatto. At first, everything was going well then it became an abusive relationship. In the end, she accepts herself as who she is and how she looked like.

Self Image in The Blacker the Berry. (2017, Jan 26). Retrieved from https://studymoose.com/self-image-in-the-blacker-the-berry-essay 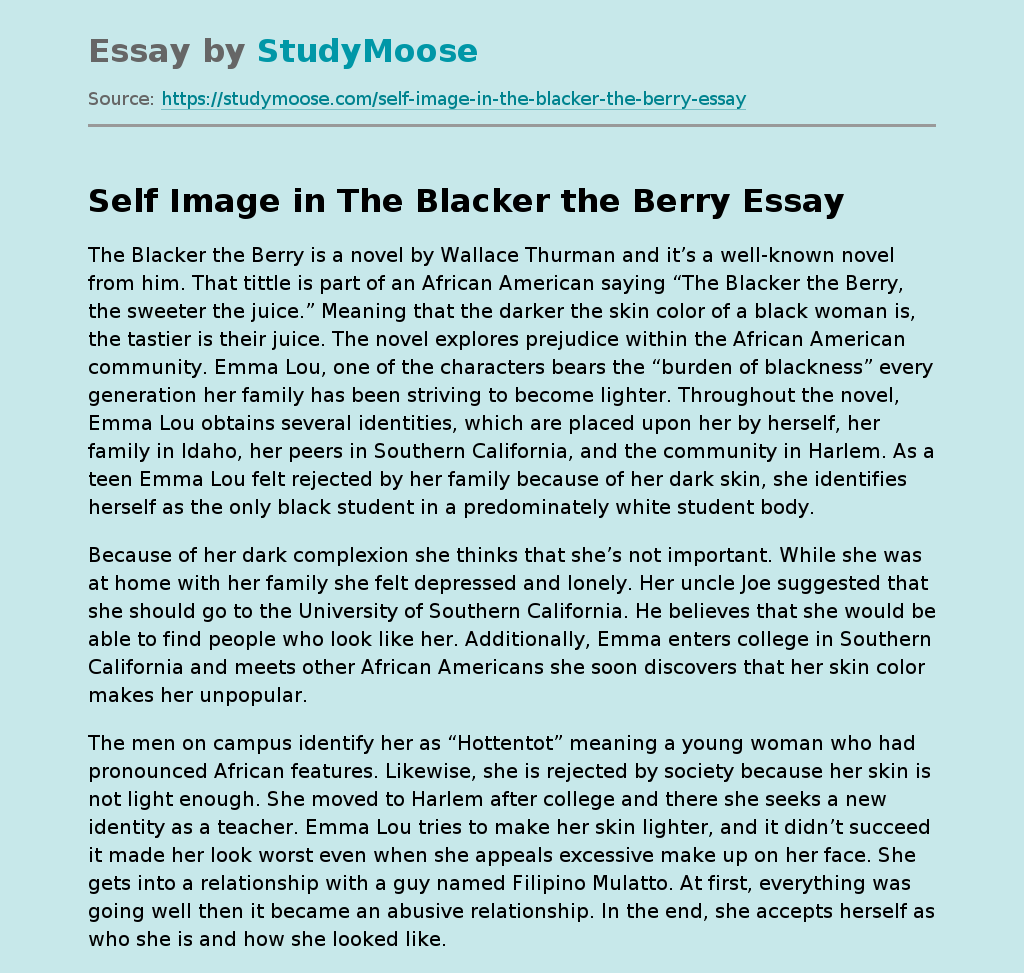