“So powerful is the light of unity that it can illuminate the whole earth.”-Baha’u’llah. In his Second Inaugural Address, Abraham Lincoln sincerely suggests that all humans are more similar than assumed in order to reveal the causes of the Civil War and to italicize the fact that the nation should unite as one.

The similarities of the North and South caused the war. Although both parties “deprecated” and “dreaded” war, one side “accepted” war while the other “made” war.

Turn in your highest-quality paper
Get a qualified writer to help you with
“ Second Inaugural Address By Abraham Lincoln ”
Get high-quality paper
NEW! AI matching with writer

Lincoln’s use of parallelism emphasizes the similarities between both parties, which ultimately are proven to be the main cause of the war. Along with parallelism, anaphora also plays a large role within Lincoln’s comparisons of the two parties. He often repeats words such as “both” and “neither,” which again, emphasizes the fact that both parties do, indeed, have similarities. Because both sides are so similar, they fail to acknowledge the fact that war is not needed; the bitter feelings toward war in which they both possess are the very feelings that keep them at war.

The parties’ comparisons create friction, which in turn “rends” them “by war.” Lincoln appeals to authority by repeatedly referring to God. Lincoln suggests that the two sides are very similar because they both believe in the same higher power. Since both parties believe in the same higher power, it would be easier to come to an understanding, and hopefully, end the war. Lincoln’s use of antithesis compares and contrasts the two parties’ bitter feelings about war, and war itself.

Their bitter feelings toward war created a war. Because the North and the South were so similar, it created friction, which was the main cause of the Civil War.

Regardless of similarities or differences, the nation should unite as one. The only way to “heal the nation’s wounds” would be to come together as one nation. Lincoln appeals to beliefs of unity. Lincoln’s continuous reference to God and His relationship to everyone creates a feeling of oneness throughout the nation. Lincoln posits that everyone is the same in God’s eyes, and therefore He treats them the same way, regardless of what side of the nation they reside. Again, Lincoln uses anaphora to emphasize the idea of oneness. He uses words such as “both,” “neither,” “we,” and “all” for these purposes. Lincoln only uses singular words, such as “I,” once to avoid further separation of the nation. In order for the “scourge of war” to cease, the nation should transition from being two separate halves, to one whole. Lincoln’s appeals to beliefs of fairness suggest that neither side was in total control. The nation should be equal. He also uses positive diction to give the audience a sense of hope.

Regardless of how similar or different the nation is, it should still be united. The Civil War is a prime example of how one side’s misunderstanding of another can create friction. “United we stand; divided we fall.”- Aesop. 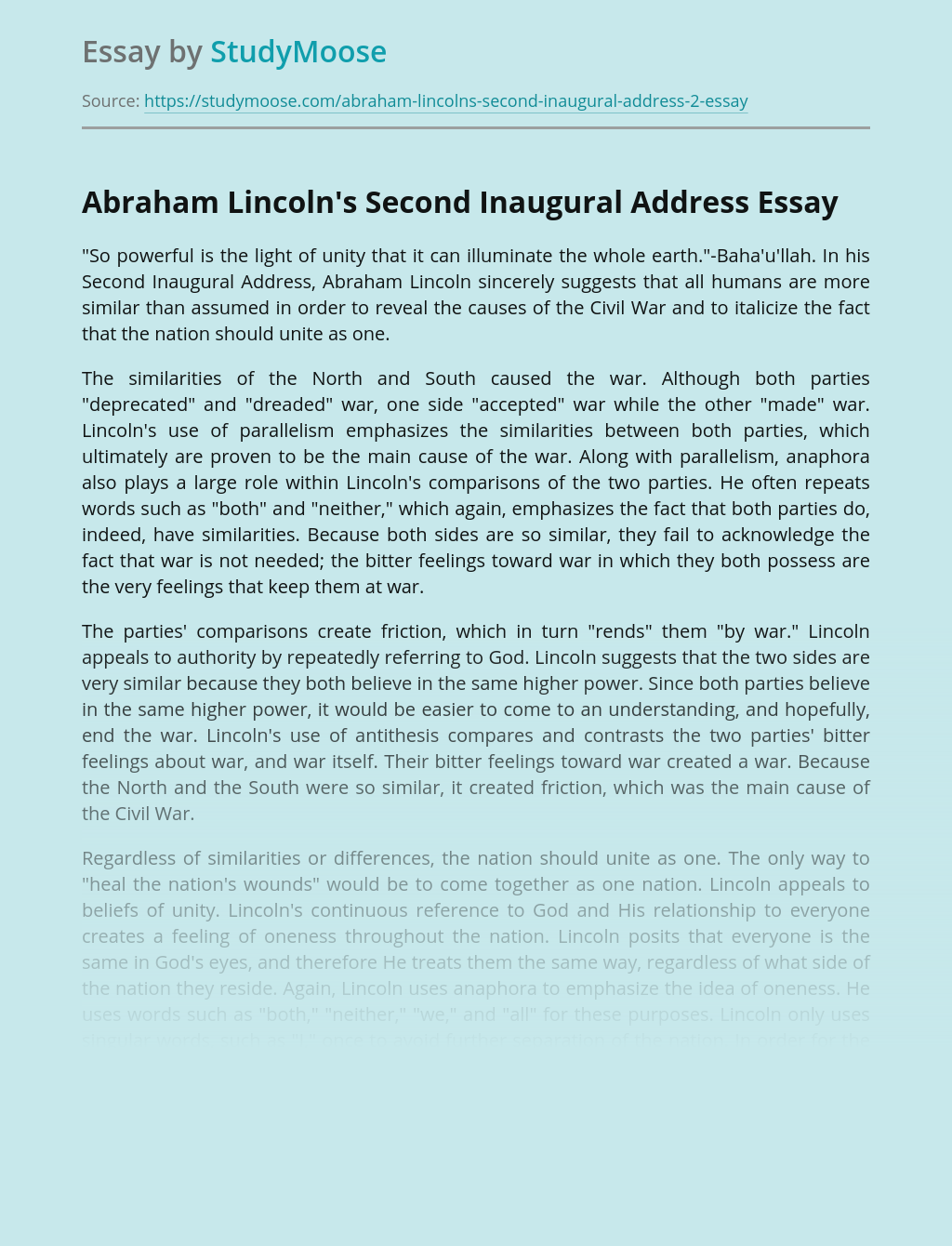 Turn in your highest-quality paper
Get a qualified writer to help you with
“ Second Inaugural Address By Abraham Lincoln ”
Get high-quality paper
Helping students since 2015
Stay Safe, Stay Original