Save Earth Before Colonizing Mars

Has humanity irreversibly defaced earth from being a sustainable planet for further centuries? Many would believe that humanity has come to a point of constant destruction of earth with no hope for change. This thought process has come forth with the resolution of starting a new sustainable planet on mars. However, it is tremendously more challenging to restart than to fix damage and change simplistic daily routines. As a global unit we do not have the resources on earth or mars, we don’t have the right amount of money to fund such a big project and we cannot afford to further damage our environment.

Don't use plagiarized sources. Get your custom essay on
“ Save Earth Before Colonizing Mars ”
Get custom paper
NEW! smart matching with writer

Currently the U.S does not have enough resources to Colonize Mars, humans are already damaging the plant we live on. There would be no water source on Mars, Earth is already lacking water as it is and for humans to take water to Mars would just limit the water that is on Earth. The water shortage Earth has it’s affected millions globally, there is limited water to support populated areas in the world.

Many places in the world don’t have safe water, and that means they don’t have the right stuff to keep there water clean and keep those people from diseases, and if humans took the clean water to Mars that would leave earth with dirty water and no clean. In Las Vegas they have a reduction of water by 19.4 percent. On phys.org it states “August 1st, 2018 humans will have consumed more natural resources than the Earth can regenerate.

” which is not good for our climate and the poorer countries in the South. People have stated that tap water isn’t safe and that everyone should drink bottled water because it is supposably safer and cleaner than tap water. However on treehugger.com it states “they use similar standards for ensuring safety of the water.” A group of scientist have done a test on bottled water and its says “259 bottles of water across 11 brands and found that 93 percent of bottled water is contaminated with microplastics.”

Currently the United States of America is $22 Trillion in Debt and Shuttle launches for NASA were estimated at over a billion dollars per launch (Quora). This money spending could cause government, government funded projects and citizens to reach extensive debt which is unrealistic. Since the United States has already proven to have a major budgeting problem this becomes a main concern for citizens. The government currently believes that the more spending that takes place the more we stimulate the economy, this is true however this puts us in more debt than we can get ourselves out of. Three major reasons the United States is in debt is the overspending for mass amounts of defense and military protection. The Balance speaks about how our current payment for defense is “$874.4 billion in FY 2018 and $886 billion in FY 2019.” This is ten times the amount budgeted for Russia and four times greater than China. This can simply be fixed by only placing military defense where desperately needed and finding more sustainable ways to make weaponry. The second major reason is due to the impact of tax cuts in the United States. The government immediately reduced revenue for every one dollar cut (Balance).

The National Bureau of Economic Research found that only 17 percent of the revenue from income tax cuts was regained. It also found that 50 percent of the revenue from corporate tax cuts was lost. This means that with further damage of the Trump Tax cut the United States economy will be in debt by a growing .7% annually and within 10 years the cut will be roughly $1.5 trillion (Balance). We can slowly change this by raising taxes on the rich and lessening taxes on the poor to decrease the amount of tax cuts and grow our debt. Lastly a big reason for our increasing amount of debt is unfunded elements of mandatory spending such as Medicare, Welfare Programs and Unemployment benefits.”Medicare will cost $625 billion in 2019. But only 49 percent adds to the deficit. Payroll taxes and premiums pay for the remainder.The rest of the mandatory budget adds to the deficit. This includes Medicaid, which will be $412 billion in 2019. Medicaid provides health care to those with low incomes. The mandatory budget also includes $656 billion in income support programs for those who can’t provide for themselves.” The only way to change the budget for mandatory unfunded spending can only be done by an act of congress that amends a program’s benefits that can change mandatory spending. This act would require a large vote and would need the United States to find other susceptible ways to provide for those who cannot provide for themselves.

Save Earth Before Colonizing Mars. (2021, Apr 26). Retrieved from https://studymoose.com/save-earth-before-colonizing-mars-essay 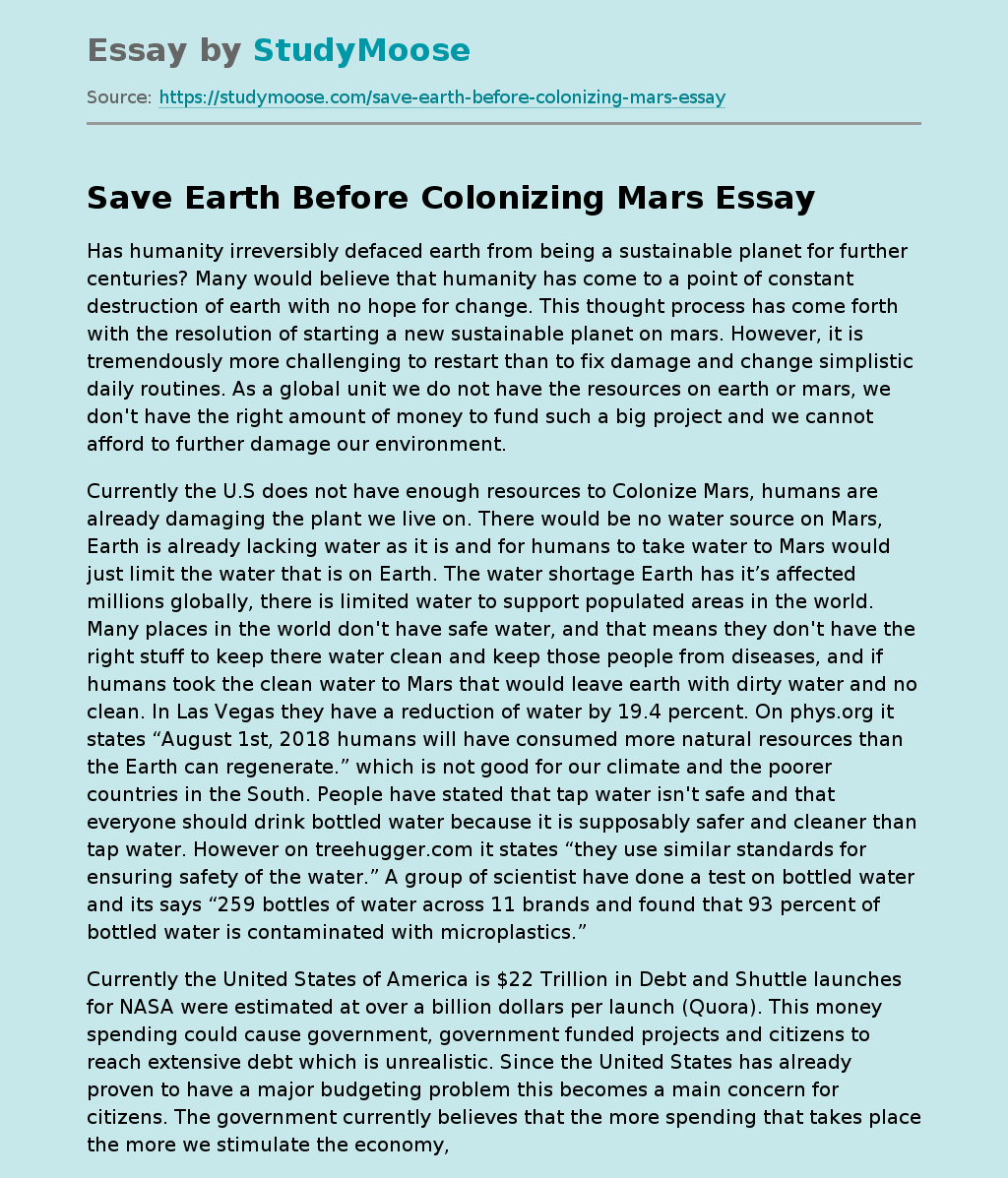