Satire and Humor in Candide by Voltaire

A satire is a style of writing commonly used by authors when they write books. Satirical writing purposely maintains the theme of a context. The paper will discuss the different satirical criticism in Candide’s novel. Voltaire used ironical concepts, ridicule, and creation of humor in the context to educate disciplines in the society. In addition, the paper will discuss various philosophical and religious mischiefs pointed out by Voltaire. Furthermore, numerous examples of satires will be featured in the paper hence the ridicule to political torture and instability.

Don't use plagiarized sources. Get your custom essay on
“ Satire and Humor in Candide by Voltaire ”
Get custom paper
NEW! smart matching with writer

Furthermore, the paper will tackle the issues that affect society, as is featured in Candide’s novel. Besides, the paper will answer questions involving religious, social, cultural, and ethnic contrasts. Additionally, the issue of whether the time the book was written influences the work would also be tackled in the errand. Finally, the essay will attack the critiques and the conflicts of the novel in the current world.

A satire is a style of literature commonly used by authors with the intention of shaming individuals, corporations, and the government.

For instance, in Voltaire’s novel, he satirized and publicly pointed out issues on religious blasphemy, political sedition, and intellectual hostility. Therefore, satire is where the use of humor, exaggeration, and ridicule exposes people’s clearness in the community. Moreover, the satirical questions are used to critique the political regime in nations and topical issues in society like corruption. Although Voltaire, in his writing, encountered success at first, immediately after his secret publication, the book was banned.

It was as a result of his direct mischievous attack of blasphemous religion, political agitation, and intellectual hostility hidden under a veil. Therefore, the insightful portrayal of the human condition inspired more authors later on.

Firstly, Voltaire aggressively prohibited the optimism portrayed by Leibnizian after the natural mishap. For instance, publishing the novel, there was an earthquake that had occurred. He made use of the catastrophe by criticizing the immediate rumors that came out, which exaggerated the severity of the event. Moreover, he pointed out that the hardship was one of the worst. Furthermore, he commended that if the sphere were enhanced, it would be better than what it is. Therefore, Voltaire criticized the exaggerated rumors of the Lisbon earthquake. Being that it is a satirical device pointed out in the novel.

Secondly, at the beginning of the novel portrays an eponymous protagonist who was young and naive. Moreover, the hero was described as successful in his schooling ages. However, the rest of the novel portrays him undergoing a series of hardships and disasters in his journey. For instance, some of the misfortunes encountered by the hero were war, rape cases, slavery, and cannibalism. In contrast, the experiences virtually eroded Candide’s optimism. Furthermore, the instinct of a survival setting gives hope to the dull mood when they discover the secret of happiness. Therefore, the novel features humorous idealism and vague ideology.

Thirdly, during the novel, Voltaire ruthlessly mocks science, philosophy, conviction, government, and the literature. Moreover, a corrosive and amusing satire of socialism remains applicable to the reflections in the setting. For instance, the supremacy and customs of motives were discovered by pronounced philosophers that implemented and conserved the culture of the Greeks. However, in the middle of the commotion territory, new apprehension ascended for individual redemption. Furthermore, the idea paved the way to the Christian religion in the setting. Therefore, the Christians found ways for the Greco-Roman heritage; hence, the aspect culminated from the satirical perspective of the Christian faith.

Furthermore, with a lot of contemporary perspectives, the references have faded with time. For example, Voltaire satirizes religion by the use of humor. He portrays how human beings came to exist in the millennial, urging the non-existing pre-established harmony in life. However, he features the religion of still hawking the same remedy while the clergies and the religious leaders indulge in antagonist characterization of provoking the scandal. Therefore, the act of prostitution in the novel lingers ironical perception of what the Christian religions entail. Hence, Voltaire mentioned and condemned the action of the sadistic nuns and priests who fall in such behaviors.

Furthermore, Voltaire depicts the worst in the world in his novel. For instance, he writes featuring the desperation of the world that propagates evil in society. Moreover, the discussion of various forms of wickedness was featured in the script. For example, in the novel, the existence of a quaint village where the inhabitants are rational, and the society is, and reasonable is featured as a single case. However, the other part of the context featured is an evil society. Therefore, satire is one of the stylistic devices portrayed by Voltaire in his novel.

Moreover, the sentimentalism foibles of the age are also a satire in the novel. For example, Voltaire attacks the flaws in European culture. Furthermore, he mocks and mimics the romantic clinches and the adventure in the States. Additionally, there are several categorizations in the setting that portrays the exemplary charismas. Thus, Voltaire’s work has an exhibition of recognizable drifting rogue of low class as the plot of the environment upholds.

On the other hand, there are different errands in the context. For example, conflict amid man and God is featured in the instance where the religion has its characterization on how humanity in the universe should behave. Besides, an ironic view is evident in the setting contrary to the expectations. Voltaire shows significant evils in society by pointing them out in the novel. Therefore, the aspect of man was featured in their old ages in the framework.

On the contrary, gardens in the setting are thought of by many critics. For example, the first example identified by the garden is the motif of the stronghold of Baron. Moreover, it portrays the biblical illusions on the Garden of Eden in the book of Genesis (Voltaire n.p). Episodically, the main character in Candide concludes the novel in a similar set of a garden. Moreover, the Garden of Eden in the Bible symbolizes paradise; similarly, in the book, the garden was featured as delight. Therefore, Voltaire’s great support for the attempt in the garden is portrayed; hence the prominent gardens serve better as the main character lives in seclusion.

Additionally, Voltaire’s novel critiques the philosophical and religious perceptions of reality. Primarily, the story ridicules the Leibnizian optimism with a description of it seemingly being endless calamity. He further teases the irredeemable evils in the world, leading to many critiques, specifically the theological perspectives that are his primary point of concentration in the novel. Therefore, Voltaire’s affirmative action in the context portrays the relentless effort of his attack on the evils.

The conclusion of the novel dismisses tutors’ optimism. Moreover, it leaves unresolved philosophy of the protagonist. For instance, the element of setting is developed a large environment with a problematic assumption. Furthermore, diverse beliefs are treated sympathetically, and the characterization is also held as an ideal philosophy of Voltaire. Further debates came up arguing out on the pessimism of the Candide novel. Additionally, the primary focus was Voltaire’s idea of the negative influence of the evils hence giving hope to a better world. Therefore, the debates majorly questioned whether Voltaire’s objective was to advocate the unreceptive retreat of humanity or dynamic, productive contribution.

In conclusion, numerous texts feature the satirical perspective of the philosophy, religion, and motives of the world. The main objective of the action is to instill and propagate characterization in every individual. For instance, pointing out the shortcomings in a novel portrays what happens in a typical world setting. Therefore, Voltaire’s effort of satirizing and ridiculing various evils in society is acknowledgeable.

Satire and Humor in Candide by Voltaire. (2021, Dec 02). Retrieved from https://studymoose.com/satire-and-humor-in-candide-by-voltaire-essay 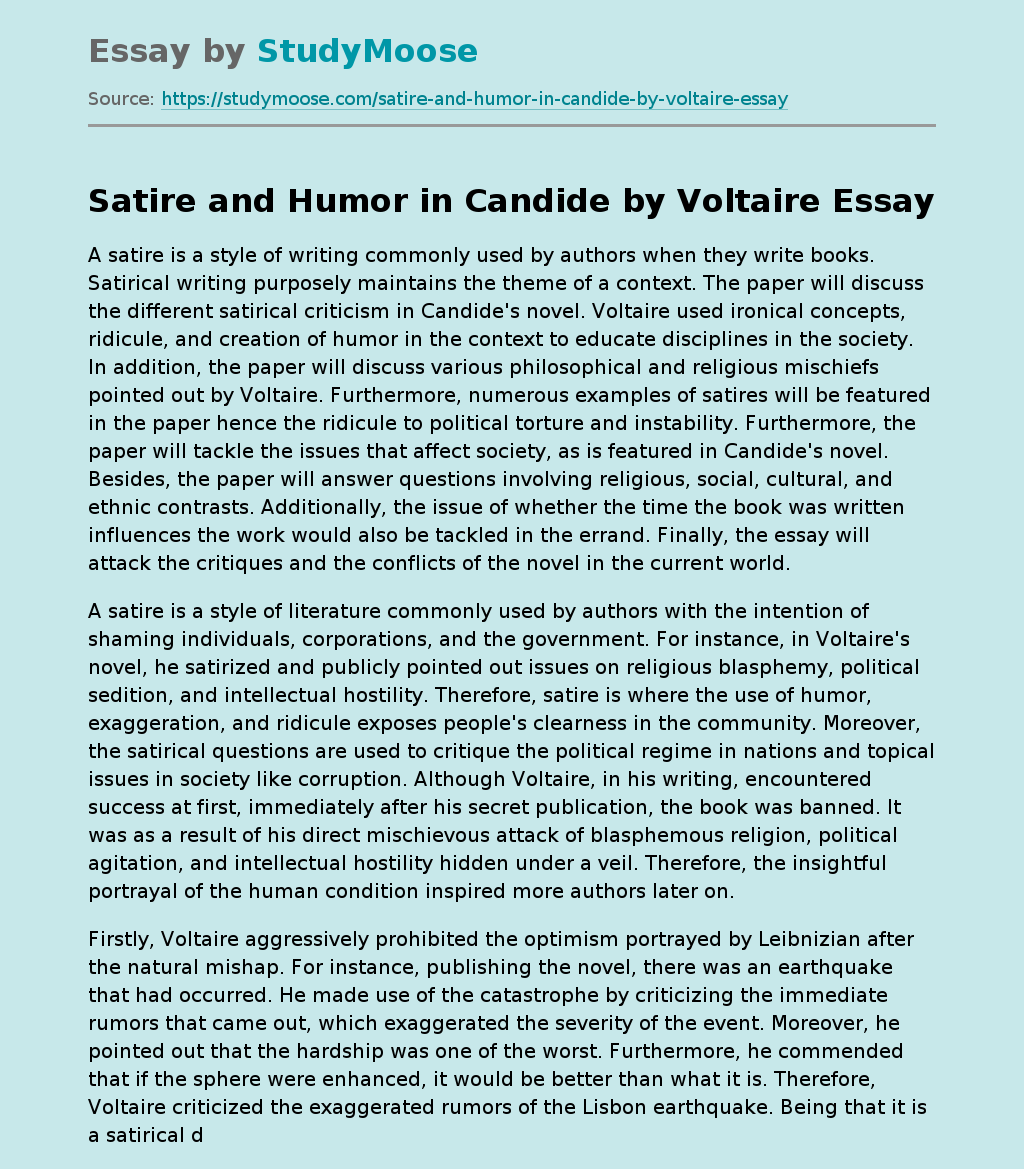