Early next year, Frucor will introduce the number one energy drink in Australia which is the V energy Drink into New Zealand market. It is something particularly different in the cold drink market, with a distinct green bottle and can. It will serve as a contrast against other caffeinated cold drinks that are on the market. The main ingredient of the product is the ‘guarana’, which is very popular worldwide for having a stimulating effect on mind and body. The company will be facing intense competition.

The marketing strategies of the V energy drink will be centred on four objectives: : Firstly, to have 40 percent market share in Auckland, New Zealand, Secondly, to be the brand icon of extreme sports and music not only in Australia but also in New Zealand, to gain 50 percent brand awareness and to have a strong community relations among consumers. The company will be using some strategies to reach these objectives such as launching online game, being a sponsor to some extreme sports activities and promoting the product through billboard, TV and radio advertisements.

A. SITUATION ANALYSIS V is an energy drink brand produced by Frucor Beverages Ltd since August 1997. In 2003, in supermarkets and service station, V had a market share over 53% in Australia, making it the most popular energy drink in both countries. V is made in Australia by Frucor. It has taken Australian energy drink market by storm, capturing over 53% of the market and driving the acceptance of energy drinks in a day time environment. V is exported to the United Kingdom in cans and bottles.

In 2007, Frucor also started to export its energy drinks to the Netherlands. V was introduced to Maldives market in 2008 and is also sold in Argentina, Papua New Guinea and in Spain as of 2011. The original and V blue flavours has been released to the South Korean market in 2012. Starting next year, the company is planning to introduce the V energy drink in New Zealand market. It is something particularly different in the cold drink market, with a distinct bottle and can it will serve as a contrast against other caffeinated cold drinks that are on the market.

Its main ingredient is the guarana which has garnered a worldwide reputation for having a stimulating effect on mind and body. V is about giving consumer’s the energy to achieve the extraordinary. It will available in different variants depending on customer’s choice. Firstly, the V green which is the original product with an energizing mix of B vitamins, caffeine and guarana. Secondly is when you need to pack a punch without the calories, it all about the V sugarfree.

Thirdly, is the V black if you want to experience the double hit of taurine with strong coffee flavour. Next is the V blue which is also called as the mysterious flavour and lastly, the V pocket rocket which is recommended to take for only once a day. With each type sold in containers ranging from 250mL cans and 350 ml glass bottles. The V drink 100 fluid ml of energy drink contains 31mg of caffeine which is significantly less than the average for all energy drinks and 10. 6grams of carbohydrates which is the least of all energy drinks.

Brand awareness| 35%| 30%| 10%| 10%| 15%| Energy drink is a tough market. V will be having a lot of strong competitors such as Red bull, Mother, Lift-plus, and Demon Energy drinks. One of the stongest is the Redbull which already exists for a long time and it’s the most popular energy drink in the whole world. Competition is becoming more intense in energy drink industry. Self-branded or home-branded drinks can push the v energy drinks out of the shelf in supermarkets especially that they have the ability to pass savings to their customers.

SWOT ANALYSIS| STRENGTHS| The products comes with different variety and different packagingGuarana as the familiar main ingredientPromotion effortsContents are transparent on the product’s labellingFashionable and trendy packagingContains lesser amount of sugarContains lesser amount of caffeine| WEAKNESSES| PricingLack of product distribution in the marketBrand exposure in other countriesWeak presence of product in the market areaLimit of 2 cans per 250mL intake daily| OPPORTUNITIES| Expanding target marketsIncrease market share| Inflation may increase the price of the drinks and at the same time, consumer’s income may decrease.

For that reason, buying an energy drink will not be in their list of priority since it is not a necessity for smart buyers. If V energy drinks will introduce or export their product in a new country, a possibility of an increase in price since they have to change the labelling of the products. If the government will imposed health and safety restrictions on the amount of energy drinks that should be consumed, health is also a major barrier; some people say they don’t drink energy drinks because they’re unhealthy and because of its caffeine content.

V energy drink target segment will be men and women ages 16-40, who are situated in the city as they are likely to be really busy and tired. Hardworking young professionals with active lifestyles who want to be awake during their working hours, athletes who want to accelerate their performance or to regain their strength after a competition, and university students who don’t want to be lagging in their lessons. Target markets are dairies near universities, convenience stores along the street, gasoline stations and supermarkets.

Those who are tired, stressed and with exhausted need something to keep going in their daily activities. V energy drink will marketed through association with extreme sports and music to students, young professionals, and athletes. Students are mostly active on night parties and some are also doing night shift in their part time jobs so they need energy for the school activities. Young professional doing morning shifts needed to boost their energy as well as Athletes who are active in extreme sports need to be energized before and after their events.

B. Marketing Objectives and Strategies: The strategic role of V energy drink will be centred on four objectives: Firstly, to have 40% market share in Auckland, New Zealand, Secondly, to be the brand icon of extreme sports and music not only in Australia but also in New Zealand, to gain 50 percent brand awareness and to have a strong community relations among consumers. V energy will use some strategies to reach these objectives through communications, promotions, and distribution strategies.

V energy Drink Company will inform the channel partners and all their stakeholders in New Zealand about the launching of the product through an exclusive meeting for the stakeholders and all the managers from every department, to be followed by a seminar to be attended by all of the channel partners like supermarkets including small businesses to have an idea about the product.

Then, they have to establish a channel relationship with their distributors like supermarkets and service stations through giving discounts and a free ticket to Australia to supermarkets or stores who will get the highest sale of the V energy drink Small businesses or retail will also be given free vouchers with a minimum of 1000$ purchase to any variants of the V energy drinks.

Considering the very tight competition of the energy drink market, the company will also be using the power of media to be able to accomplish the target brand awareness. They will design a billboard which features a well-known rugby player who is drinking v energy drink.

They will also make a radio and TV advertisement featuring the testimonies of students and some workers who successfully finishing their works with the help of the product. The company will be building community relations by being one of the sponsors and organizers to every extreme sports event like bike racing and car racing. The first sports event to be launch will be the V Human Powered Burnout. It is a car racing activity where drivers who want to participate should give evidence or a minimum of 100$ proof of purchase of the v energy drink.

Limited Free tickets will also be given to interested viewers who will send or put in a drop box a v energy drink proof of purchase to be drawn on a month before the event. Aside from being a sponsor, the company will be launching their own extreme events. The company created a new campaign for the v energy drinks. By hacking Kinect motion tracking software and combining it with audio production software; they created The V Motion Project, a tool that could transform the body’s movements into music.

The project has resulted in a series webisodes, a song in iTunes, a music video and TVC’s that all demonstrate that V brand core value that ‘with enough energy, you can do extraordinary things. This is one way of new and interesting ways to engage with costumers. This project became successful in Australia so, they are also planning to bring into New Zealand. Another strategy targeting the students in a university will be through the V Robber’s Training Academy where students will be trained with their robbery skills.

Participants will be given free green shirt bearing the V’s logo and lucky winners will also be given exciting prices together with a bunch of v energy drinks. The V Robber’s Training Academy team will visit all University who are willing to learn skills in robbery focusing on the product’s benefit which is giving energy needed after and before an event. It is also important to keep the people updated with new products, exciting promos as well as other events regarding the product.

So, the company will be keeping an eye in updating every single detail in their website and facebook page and twitter accounts. They are also planning to create a blog, a space where customers will be writing their comments, reviews and suggestions. One way of promoting the product with the help of technology will be through the online game V robbers most wanted. It is an online Flash game pitting hopeful New Zealand burglars against each other for the chance of winning a $50,000 in prize money.

The game itself is a memory test, where the player memorises the sequence of coloured wires he or she needs to cut in order to disable an alarm guarding another player’s stash. The money proposition for V’s manufacturer, Frucor, will be user’s need to redeem codes on specially mark cans of the energy drink in order to play the game.

Check the Sales and Distribution of the Product| Sales Department| December 2014| 5,000| Total Cost| 206,000| IMPLEMENTATION BARRIERS: In every plan there’s always a barrier during the implementation period, just like the marketing plan. So, it is a need to anticipate these barriers to be given appropriate actions. Some barriers in the V energy drink marketing plan implementation are: The flow of the activities may not be followed because of lack of budget, also lack of resources and lack of staff or human resources. 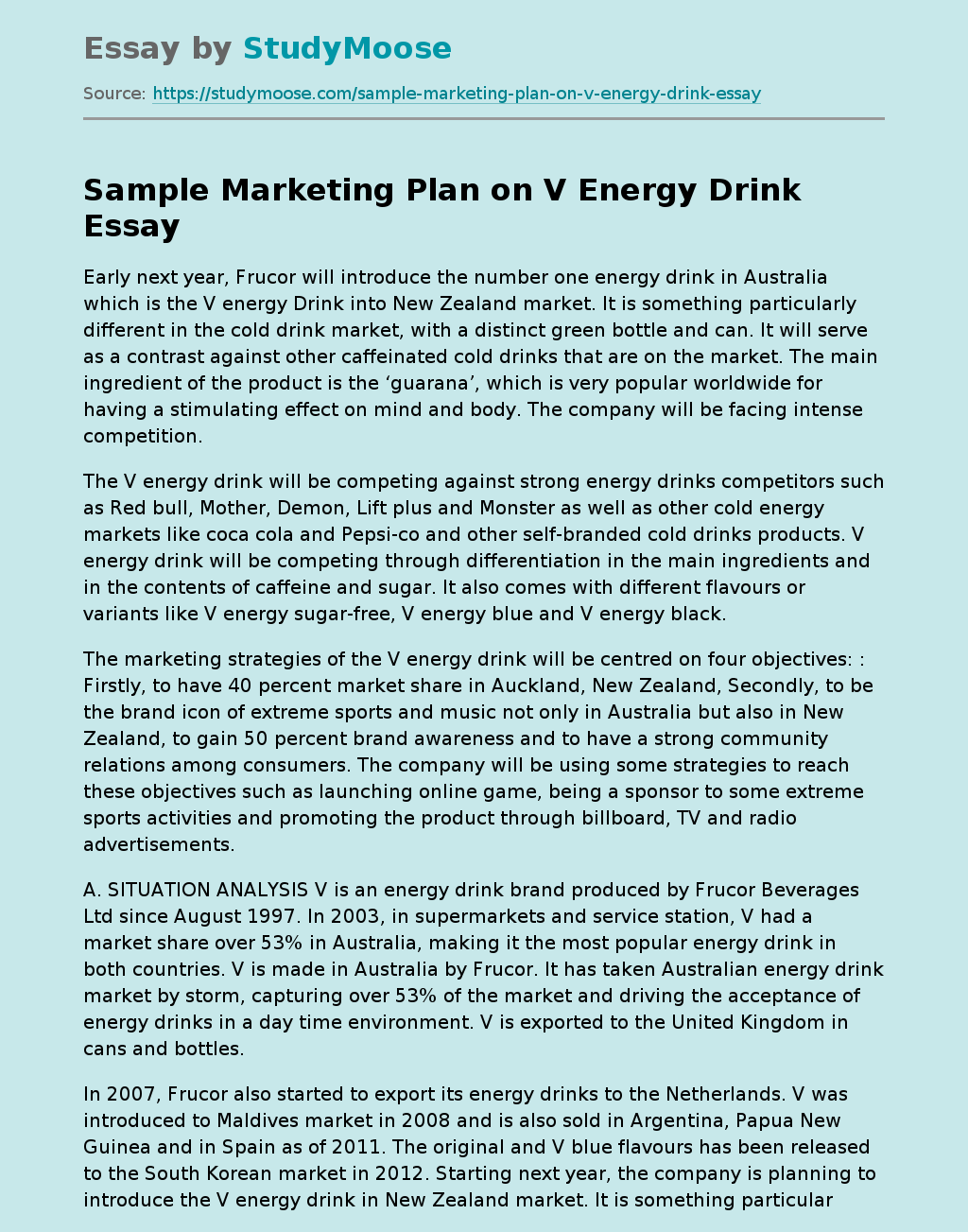