Jean-Jacques Rousseau believed that only the general will, the will of all people together granted sovereignty. In his Book, ‘The Social Contract’, Rousseau highlights the need for a lawgiver. He considers the possibility that that the General will err, if it errs, it would simply not be the General will of the people. “The general will is always right and is always tends towards the public utility. However, it does not follow that the deliberations of the people always have the same rectitude”.

Don't use plagiarized sources. Get your custom essay on
“ Rousseau’s Lawgiver ”
Get custom paper
NEW! smart matching with writer

Popular sovereignty is supposed to solve (il) legitimacy and arbitrariness. But once the people have the power, that “solution” suddenly looks like a problem, for the people, too can be a source of arbitrariness.

This essay will touch upon lawgiver interpretations, but also demonstrates the continued relevance of Rousseau through the specific, and often overlooked, tasks the lawgiver must perform in the text. His acts, taken as explicit prerequisites of democratic will formation, are also our burdens of founding and re-founding democracy in the midst of our mutual opacity and the weight of structural inequalities.

At the same time, Rousseau’s account of the psychic threats which hinder our attempts to secure freedom and equality points toward an ongoing struggle to preserve democratic life.

Our capacity to serve as our own lawgivers – namely, our institutional imagination and ability to cultivate openness to the voices of the subjugated – will dictate which of the two storylines of the Social Contract becomes our own. Lawgivers Aim The lawgiver of the Social Contract is asked to constitute a democracy in a generalized political time.

1 He generates freedom and equality within a people-to-be who find themselves in a “social pact” out of mutual despair.2 Bound by a general account of historical development, the people he is forming are haunted by experiences of inequality and subjugation, devoid of any social logic promising transcendence.3In attempting to overcome such memories and institute a general will, the aims of the lawgiver are

Threefold: 1) To soothe the fear of misrecognition experienced in prior undemocratic social relations by ensuring equal treatment of each member’s interests, 2) Impart to the members knowledge of the social whole from the perspectives of all others 3) Produce a motivation for members to consider the other in their deliberations.

These three notions remain crucial to our current democratic reflections. They point toward an institutional life that supports the participation and reproduction of fair deliberative settings and egalitarian outcomes. Yet unlike many accounts of the lawgiver’s activity, it is crucial to recognize the limited means by which the lawgiver attempts to execute his task. The lawgiver of the Social Contract is too often assimilated with the authorial position.

Rousseau assumes in his recommendations to Poland, Corsica, and Geneva.4 The xenophobic,5 indigestible characters6 to be cultivated in his work on Poland do suffer from the legacies of partisan division with which even the lawgiver of the Social Contract must struggle. No account of legitimacy can evade overcoming these elements of the historical record. Yet, the Polish also suffer from extreme maladies particular to their religious, geographic, and historical positioning. Artifices of nationalistic zeal become an element of republican solidarity in those situations where a sense of independence can survive only in the invented memories of being a people. Such elements of identity construction are, for Rousseau, a defensive concession to either exacerbated internal corruption or a menacing international scene.

Lawgivers Work The lawgiver of the Social Contract instead seeks to inspire the practice of the general will indirectly, “secretly,” through institutional reform. He coordinates each member’s desire for recognition in the direction of the common good. The material interests of the citizens are satisfied in such a manner that each member receives a sense of standing and worth from his contribution to the reproduction of the community. Implicit in this claim is, obviously, that the international scene is not necessarily menacing for Rousseau.

The Lawgiver and Democratic Institutions It will be the demand of the lawgiver to overcome the mistrust, fear, and shame that produce a denial of politics and instead make politics a place where one’s material interests can be satisfied. Through treating the interests of all equally, generating understanding about the needs of others in the community, and effectively motivating each to consider the well-being of all, the lawgiver is to give force to the general will that lies dormant as only a normative hope expressed by the members of the social pact.

For Rousseau, the social pact cannot become the general will until it is “given motion and will by legislation.”7 “Individuals see the good they reject,” and morality does not inspire acts on its own accord. As a result, the lawgiver is charged with the task of designing the laws, or “conditions of civil association”8 which are particularly suited to the historical, physical, and material circumstance of a people. In the spirit of Montesquieu, the legislator is to craft a set of laws with regard to the form of government, residential patterns, land use, economic development, etc. that maximize the possibility of free and equal relations between citizens. 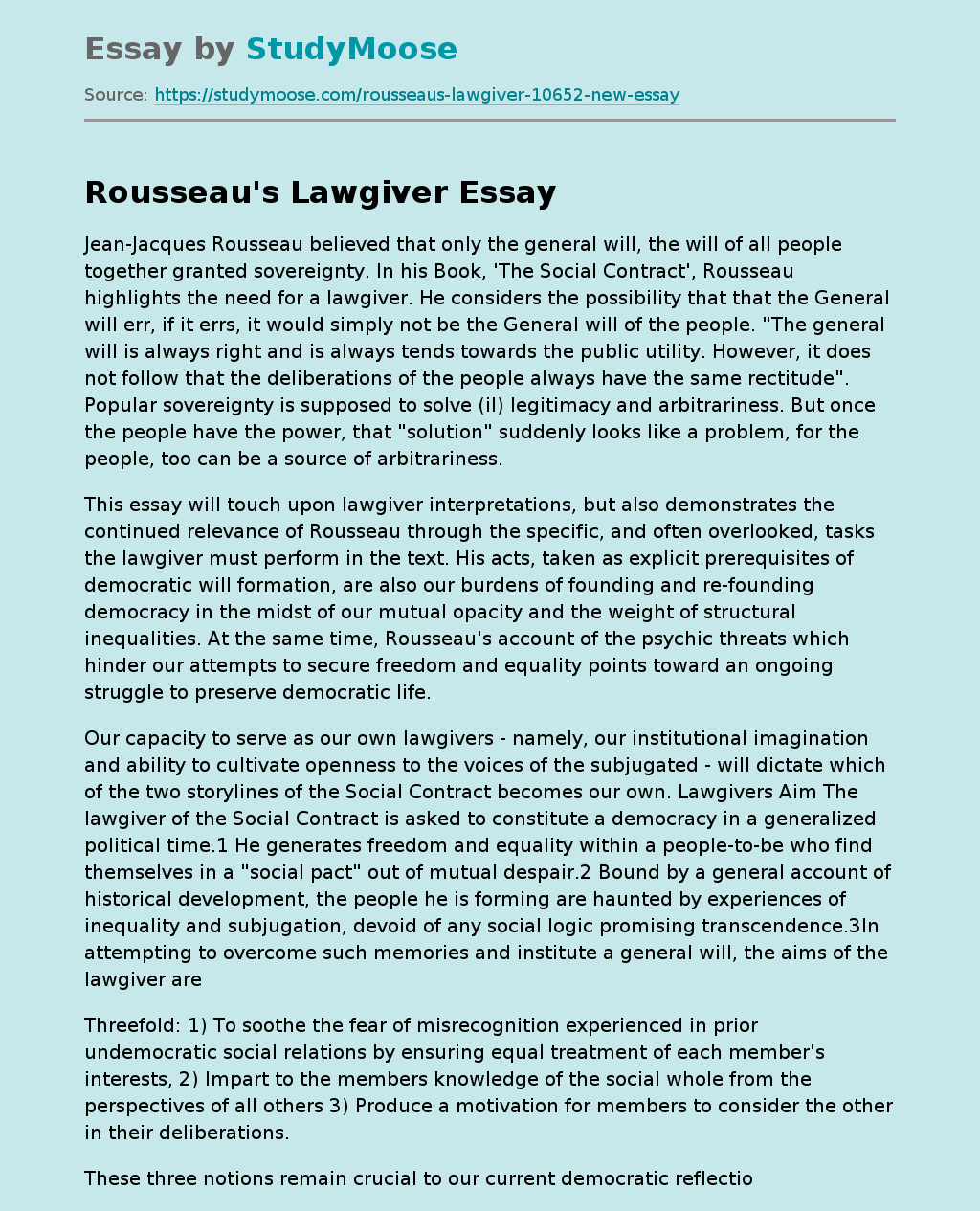