What is meant to be, will always find its way. This is one of the realities in life that we must accept. We can’t avoid fate or destiny but we must be ready in facing it.

In the movie, the kingdom Troy wasn’t able to stop the prediction of the king’s daughter that the kingdom will be burnt out because of Paris because no matter how they sent Paris away, destiny found his way back home. A tragic event happened but at the end, Helen kept her faith that someday, she and Paris will be together again in heaven.

Turn in your highest-quality paper
Get a qualified writer to help you with
“ Reflection and Reaction for Count of Monte Cristo and Helen of Troy ”
Get high-quality paper
NEW! AI matching with writer

This shows how fate plays a big part in people’s lives.

As I reflect to it, there was a time in my life that maybe it was a choice but I believe, it was a sort of my destiny. At the young age, I became a mother and everybody knows, it is not easy- a lifetime responsibility. I undergone depression, disappointments, hardships to the point I almost quit but eventually, I learned how to happy with it and stay strong all the time.

Sacrifice is always beside me and I should learn to embrace it with positive thoughts and strong heart. I can see how Helen tried to stop the war, how she just loved and how her innocence gave her so much sufferings but in the end like Helen, I can still stand and face the world all over again.

As I watched the movie, I was amazed how the King commanded to throw his son at the mountain but later on, I understand that he was just protecting the entire kingdom against the prediction that Paris will be the cause of Troy to be burnt out.

When Paris came back to Troy, I got disappointed that the King did not believe the prediction of his daughter anymore and put his kingdom at risk. I hate how the King let Helen in and sacrifice his people’s lives for the sake of his son’s love for Helen. For me, a King must prioritize his kingdom and not just his son and before he makes his decision, he must think first the consequences.

Another thing which broke my heart was when the King of Spartan sacrificed her daughter to win the war and that war was because of Helen. Helen caused a lot of troubles and ruined everything.

This is a very sad story. I couldn’t imagine how a kingdom be gone because of a woman. Now, I can say that a woman can make impossible things possible.

THE COUNT OF MONTE CRISTO REACTION

The line “God will give me justice” really touched my heart because God revealed to Dantes which had to be tried in the crucible of a horrendous prison to be real. Though Dantes was set on revenge, it seems like God sent a faithful friend to keep Dantes head and heart level in the battle. At a weak moment when Dantes was about to lose someone who loved him, his servant or friend tells him “I will protect you, even if it means protecting you from yourself.” My favorite part was when Faria taught Dantes many things that made him look and feel like an aristocrat. It didn’t leave any mark from his identity before as an illiterate and uneducated. That made him look and feel like a real Count. I also like the part when Dantes planned on kidnapping Mondego’s son named Albert and saved him from the so-called kidnappers. He didn’t know that Albert was his son. It is a good thing for me that he planned that way because he already got his son’s trust and admiration.

Albert here was quite disappointed to his father Mondego because he actually does the business first than doing his job to his family. That was why he was so happy when Dantes gave his inspirational speech to Albert instead of Mondego. The author seemed to make the readers appreciate his works. He is really genius for me because he got his entire message for the readers in one story. That love would conquer all and that never lose hope because who knows you will be more powerful to the people who is degrading you right at this very moment. And most of all, God is always here for us. He is giving us problems and trials in life, which later on will be our sword in whatever challenges and obstacles we will have in the future. That problem makes who we are now because of the lessons we get from it.

Reflection and Reaction for Count of Monte Cristo and Helen of Troy. (2017, Jan 09). Retrieved from https://studymoose.com/reflection-and-reaction-for-count-of-monte-cristo-and-helen-of-troy-essay 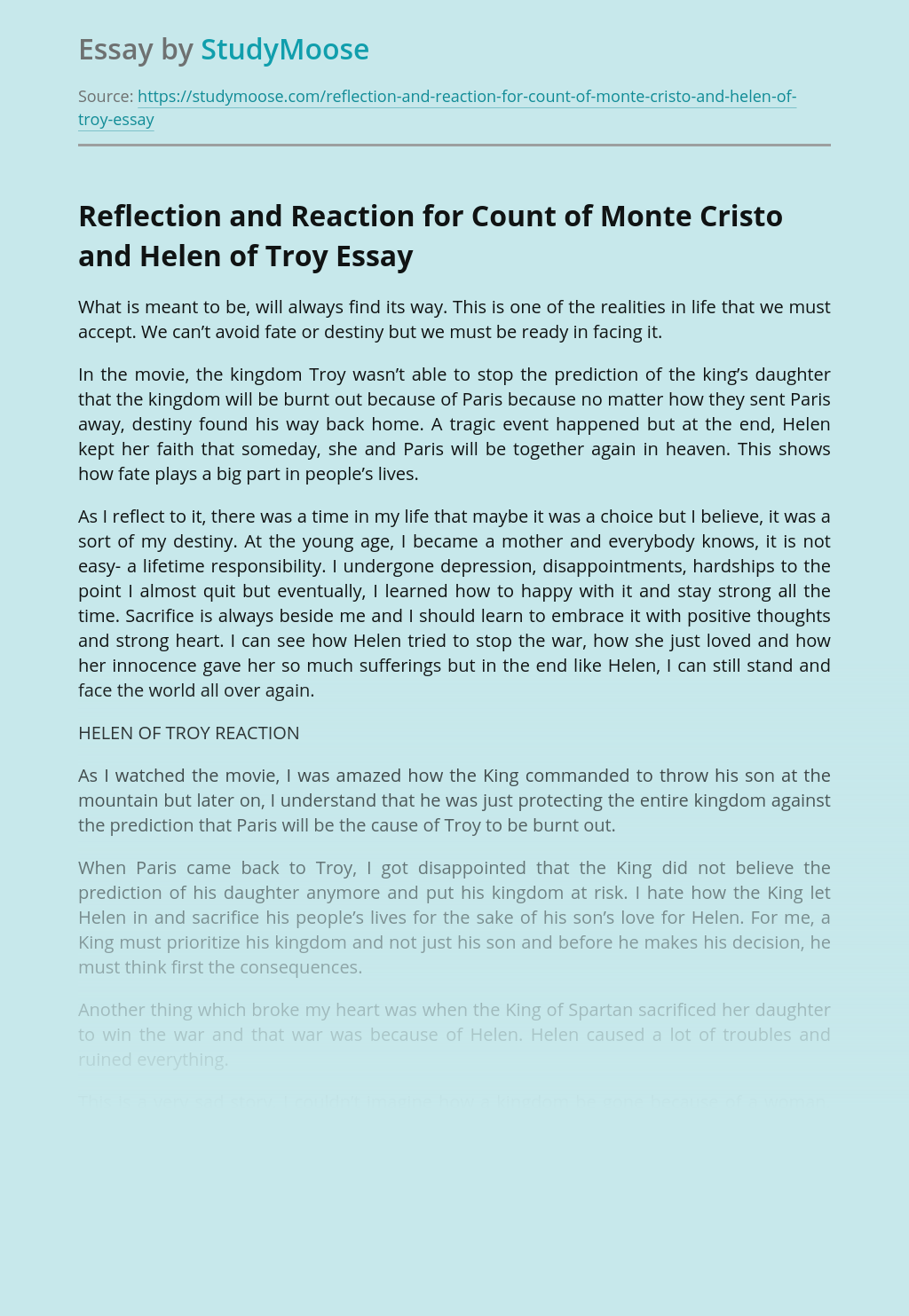 Turn in your highest-quality paper
Get a qualified writer to help you with
“ Reflection and Reaction for Count of Monte Cristo and Helen of Troy ”
Get high-quality paper
Helping students since 2015
Stay Safe, Stay Original