Recurrance among Centuries in Literature

When looking at all of the classical literature eras, three come to mind: Ancient, Medieval, and the European Renaissance eras. The ancient era being the oldest starts around 8th – 3rd century BCE. This era includes a number of epic poets such as Homer, Hesiod, Aesop, Sappho, Pindar, Aeschylus, Sophicles, Euripides, Aristophanes, Menander, and Apollonius of Rhodes from Ancient Greece. Then there was Catullus, Virgil, Horace, Ovid, Seneca the Younger, Lucan, Juvenal, and Pliny the Younger from Ancient Rome (Mastin, 2009).

Medieval literature is considered the works that were completed during the Dark Ages.

Don't use plagiarized sources. Get your custom essay on
“ Recurrance among Centuries in Literature ”
Get custom paper
NEW! smart matching with writer

As far as epic poetry is concerned this was between the years of 657-1580. Poets from this time include Cademon, Venerable Bede, Geoffrey Chaucer, Margery Kempe, John Gower, Francesco Petrarch, Dante, Christine de Pizan, William Longland, and Raphael Holinshed (Medieval, 2018). There are several epic poems from the Medieval era that are still very popular today.

The last era to discuss is the European Renaissance era, which is also considered ‘The Rebirth’.

It is immediately following the Middle ages around 1300-1600. This time period is said to have rediscovered classical philosophy, literature, and art. The epic poets of this time include Boccaccio, More, Castiglione, Ariosto, Spenser, and Milton. All three time-periods show recurrences in the themes of their epics (Looney, 2018). One thing is for certain; all the epic poetry in all three eras describes the heroic deeds in a time beyond living memory.

To reference the recurrence of these themes would be best by taking one epic poem per era.

Which will include Virgil’s Aeneid from the Ancient era, Sir Gawain and the Green Knight from the Medieval era, and Thomas More’s Utopia from the European Renaissance era. The shared themes between the three of these epics are oaths and promises, emotion versus reason, women’s roles, games and entertainment, family relationships, and sex/love/marriage.

Emotion versus reason is one of the most reoccurring themes throughout the centuries. Starting with the strong characters in Aeneid such as Aeneas and Dido who are represented on completely different sides of the spectrum regarding emotions. At the beginning of Aeneid, Dido is represented as a very strong leader. She is strongly influenced by her emotions and her love of Aeneas throughout the epic that she begins to neglect the duties to her country. Almost as though she mourns the loss of him, though he has not died. Dido cannot bear to continue her life without him and poetically kills herself with Aeneas’s sword.

On the other end of the spectrum is Aeneas himself, who is driven by fate. Almost to a fault will he push his emotions aside to fulfill his destiny to the Gods. When Aeneas momentarily loses sight of his destiny, Mercury will send him visions to remind him of his mission (Aeneid. Book IV. 298-365). This causes Aeneas to leave Dido, which sends her into an emotional spiral. Through out the epic, Aeneas is only seen to have emotional moments when he lost his wife, Creusa, and at the very end when he kills Turnus.

Sir Gawain and the Green Knight shows a battle of emotion versus reason as well. Especially with Gawain, who battles the balance of both emotion and reason. He is impulsive by accepting the challenge from the Green Knight at the start of the epic, yet able to decline the many sexual advances from lady Bertika throughout the story. With that being said, Gawain cheats with the girdle from lady Bertika and is later overwhelmed with guilt. Emotions versus reason shows throughout Sir Gawain and the Green Knight, but instead of one character showing a strong representation of one or the other, Gawain internally battles the two himself.

In the European Renaissance epic poem, Utopia, emotion versus reason is not as cut and dry. It is represented in the difference of bodily pleasures and pleasures of the mind. Citizens of Utopia believe in true and counterfeit pleasures, true being naturally occurring in the body such as eating right and exercising. Counterfeit pleasure is that of pride in wealth, appearance, and titles. It is believed that only pleasure exists in acts of virtues shared in the afterlife. Utopians do everything to eradicate these counterfeit pleasures.

The next strongest theme throughout the eras is the roles women played apart in with each epic. Even today, women are seen as the lesser sex, yet in the background women are running everything and are in more control then the men let on to be true. Such as in Aeneid, where the strong women are Venus, Dido, and Juno are major characters in the epic. Venus, being the mother of Aeneas, is constantly trying to help her son though she must keep her distance from him since she is a Goddess. Dido was an intelligent and fair leader. Then there is Juno, Queen of the Gods, is a powerful leader. She is known to persuade King Aelous to get what she wants.

In Sir Gawain and the Green Knight, women are shown to be submissive, manipulative, promiscuous, and strong-willed. King Arthur’s wife is the submissive type woman that is barely mentioned throughout the epic. Lady Bertilak shows the attributed of a persuasive and promiscuous lady. More promiscuous than persuasive since she attempts to seduce Sir Gawain each day while her husband was away. While she was unable to tempt Sir Gawain to lay with her, she was able to persuade him to take her girdle because whoever wears it is protected (Sir Gawain and The Green Knight, lines 1851 – 1853). The manipulating and deceiving female character is Morgan LaFaye. She plays the other characters in the epic almost like a game of chess, putting them where she wants them throughout the story line. The only other person in the text that knows of Morgan LaFaye’s manipulation is the Green Knight who reveals it at the end of the poem.

In the European Renaissance era, women are more equal amongst men, as shown in Utopia. In the other eras, women were certainly strong roles, but they were shown as inferior to their husbands and/or fathers. In Utopia women are given similar responsibilities as their male counterparts where agriculture is concerned. The only exception to this was that women are not as strong as most men. Because of that, women would take part in lighter jobs (Utopia. Book II. 2159).

Lastly, the way family, sex, love, and marriage are portrayed throughout all three eras is something to be said. Familial bonds are held to the upmost importance in the epics. Take a look at the familial relationship portrayed by Aeneas and his family. When Aeneas’s village was burning down he was carrying his father on his back and holding his son’s while trying to escape. Aeneas’s wife, Creusa, who is walking behind them get lost. Aeneas goes back for her, but unfortunately is too late and Creusa is dead. As stated earlier, Venus will go to great lengths to take care of Aeneas. Venus has even gone as far as to disguise herself in the name of helping her son. At one point in the epic, she wept to Jove to ask what Aeneas could have done so bad and if he has suffered enough (Aeneid. Book I. Line 274).

Move over to the Medieval period to see the marriage of two couples: King Arthur and Guenevere and Lord and Lady Bertilak. As previously stated, Guenevere is very passive and non-conflicting to the story. On the other hand is the Bertilak’s who seem to be more deceiving yet fun. The whole test for Gawain was constructed by the two of them. With that being said, Lady Bertilak makes numerous attempts to sleep with Sir Gawain. On the first night she is unsuccessful other than receiving one kiss from Gawain. On the second night she is able to procure two kisses from Gawain. On the third day, three kisses and she request a token of love from him.

Sex, love, and marriage in More’s text is very different. Both the man and the woman are to expose themselves to each other before marriage before making a firm decision to marry. Not only that, men had to be at least twenty-two years of age and women had to be at least eighteen. Pre-marital sex was forbidden and was harshly punished for committing. If a man and a woman had pre-marital sex they were no longer allowed to marry. Though the marriage and sex practices are different from the others, marriage in Utopia lasted until your partner died. Exceptions to that are adultery or abuse. In the event a marriage was ended due to adultery, the injured party is allowed to remarry and the adulterer or adulteress was sentenced to a life of slavery and never allowed to remarry.

Each group of characters are also depicted of having activities he or she used to pass the time in each era. In the Aeneid, they held funeral games, boat races, and foot races. Other activities included boxing matches and archery tournaments. Even in Ancient times did people feast, drink wine, and tell stories to their friends and family. Sir Gawain and the Green Knight starts as King Arthur and his knights at a gathering in Camelot having a feast, singing and dancing, and participating in a tournament amongst each other. The Green Knight immediately challenges King Arthur up until Gawain takes his place. Once again, games and entertainment is shown a little differently in Utopia. Instead of the traditional games and drinking spirits with one another, the citizens of Utopia participate in what they call recreational hour. This is not a battle of brawn against another man or woman in the community. Instead, it is a battle of the wits. They participate in games of chess or virtues; games that strengthen the mind instead of the body.

There is certainly a recurrence of themes that are shown throughout each era of classic literature. Throughout each era, the themes are reflected a little differently as time moves forward. The women go from being strong influencers but non-prioritized in Ancient times to being more equal amongst men but hardly stand out in the European Renaissance era. It goes the same for sex and marriage. At first, wives are very objectified and their husbands do not consider them as important as their own sons. Later, marriage is held in high esteem and sex is not recreational. Though there are differences shown in each era, it properly shows how things change over the course of time.

Recurrance among Centuries in Literature. (2021, Sep 13). Retrieved from https://studymoose.com/recurrance-among-centuries-in-literature-essay 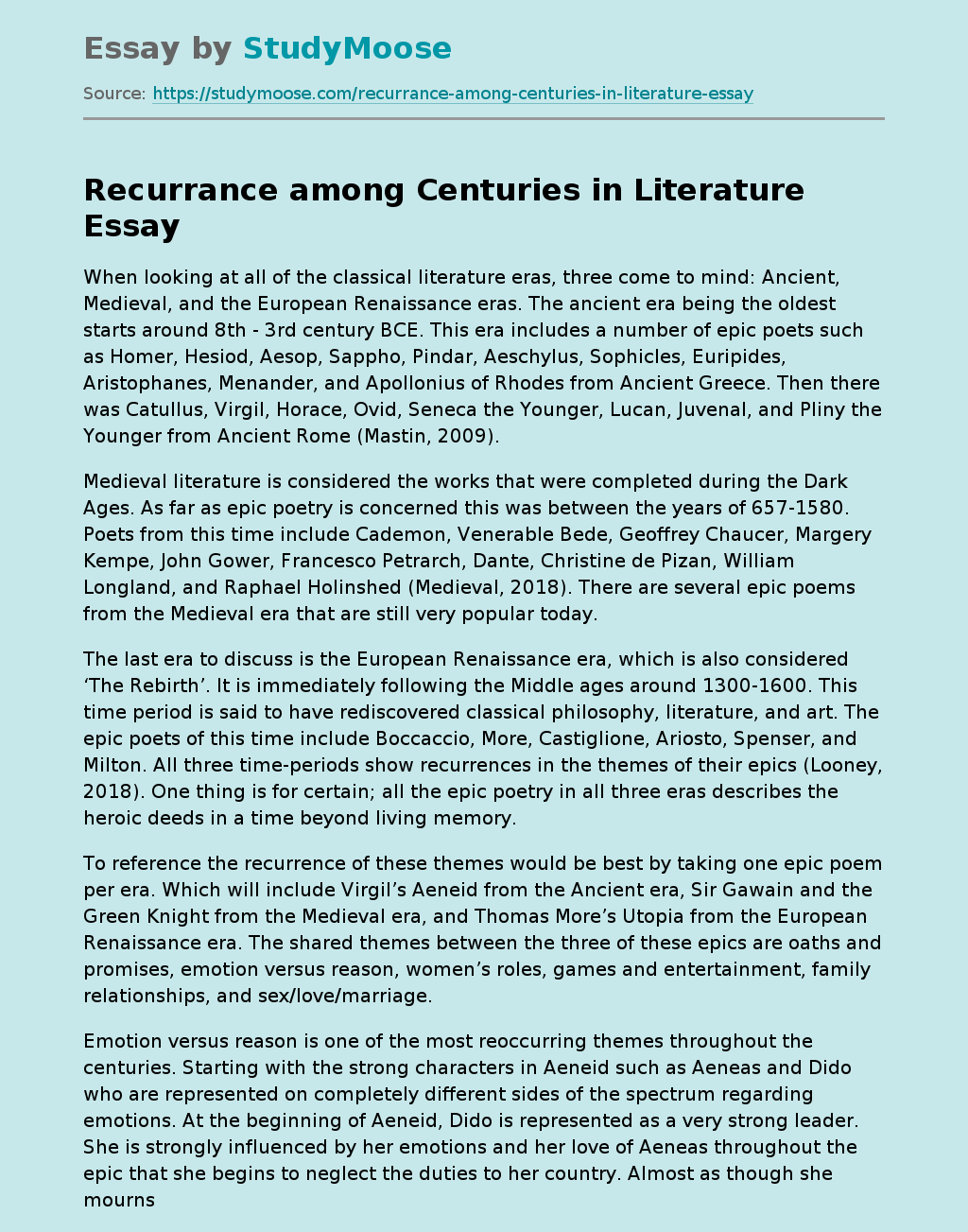