One of the most prominent names surrounding the 1960’s Civil Rights Movement is Dr. Martin Luther King Jr. who used non-violent protests to fight for the equality of Afro-Americans. In the non-fiction book The Autobiography of Malcolm X: as told to Alex Hayley, which was published by Ballantine Books of The Random House Publishing Group in 1973, we are taken on a revealing, 466 page, journey through the life of “The angriest black man in America” Malcolm X.

This riveting autobiography gives us a backstage pass into the life of an Afro-American man who struggled through life and morphed into one of the most influential ministers and political activists of the 1960’s.

Don't use plagiarized sources. Get your custom essay on
“ The Autobiography of Malcolm X: Book Report ”
Get custom paper
NEW! smart matching with writer

Malcolm X’s autobiography invites us into his life from his childhood beginnings, during The Great Depression, to the time of his assignation in 1965. It covers his struggle to find his purpose in life as a young Afro-American man during a time of great racism and his religious journey as an adult that turned his life around making him one of black America’s most powerful voices.

In the beginning Malcolm tells of his rough childhood life as the son of Earl and Louise Little, born on May 19, 1925 in Omaha, Nebraska. His father was a minister and organizer for Marcus Garvey and together they believed that all Afro-Americans should go back to the land of their ancestors. Malcolm’s mother was a mulatto, part white, giving her light skin that was passed on to Malcolm who hated every bit of white blood that was in him.

He goes on to tell of how the white man tore apart his family.

His family was forced to move to Lansing, Michigan to avoid Klu Klux Klan threats. In Lansing Malcolm’s father was killed by a white supremacy group known as the Black Legion. While the family lost Earl Little they gained the company of white social workers who worked over the years with the family and slowly tore it apart causing Louise Little to be moved in a mental institution and causing the children to be separated among foster families.

As a child Malcolm succeeded in school and was at the top of his class but as life went on he went from a scholar to hustler and a party animal moving from Boston to New York to Chicago going out late at night to dances and clubs experiencing the nightlife surrounding him and even getting himself very acquainted with drugs. This hustling life lead to prison time where Malcolm found himself emerged in books, and once again learning and where he began his life as a Muslim and a political leader.

The Autobiography of Malcolm X is definitely a book worth reading and it leaves a big impact on so many people. First of all, Malcolm is one the most complex and truthful public figures. His story is full nothing but dead honesty and it is this attitude of his that has so many speaking about his autobiography. Malcolm X is one of those people who you either just cannot relate to or understand, or who you simply adore. His words and messages are powerful and frank, and he is not afraid to speak his mind.

For example he was comfortable enough to tell Hayley to write how the white man was “the devil” which is understandable considering his childhood, and how he believes the story of Mr. Yakub creating the white man from a black man, but regardless of if you agree with his ideas and theories the book is a must read. I myself do not agree with calling white people devils and of course do not believe the story of Mr. Yakub. Second of all, Alex Hayley did such an amazing job of writing Malcolm’s autobiography.

Hayley gave the reader an excellent translation of Malcolm’s thoughts and feelings drawing the reader into the book and giving it a very intimate feeling, after all he was a journalist and he wrote the book based off of countless interviews with Malcolm and together they are able to transport us to the time where racism was in control of this nation. Overall the book was a great read and I would most definitely recommend it to anyone. In conclusion the book gives the reader a great journey through the life of one of the most powerful voices in the Civil Rights Movement.

Malcolm’s stories are captivating and truthful and full of meaning. It made me realize exactly how much hatred was around and how if it hadn’t of been for people like Malcolm X and Dr. Martin Luther King Jr. our nation could still have been diseased with racism, that’s not to say that racism isn’t still around but it is a lot better than what it used to be. The message here is to learn to be accepting of others and to learn that we are all the same in Gods eyes or Allah’s depending on your religion. This book should most definitely be on your list of things to read. 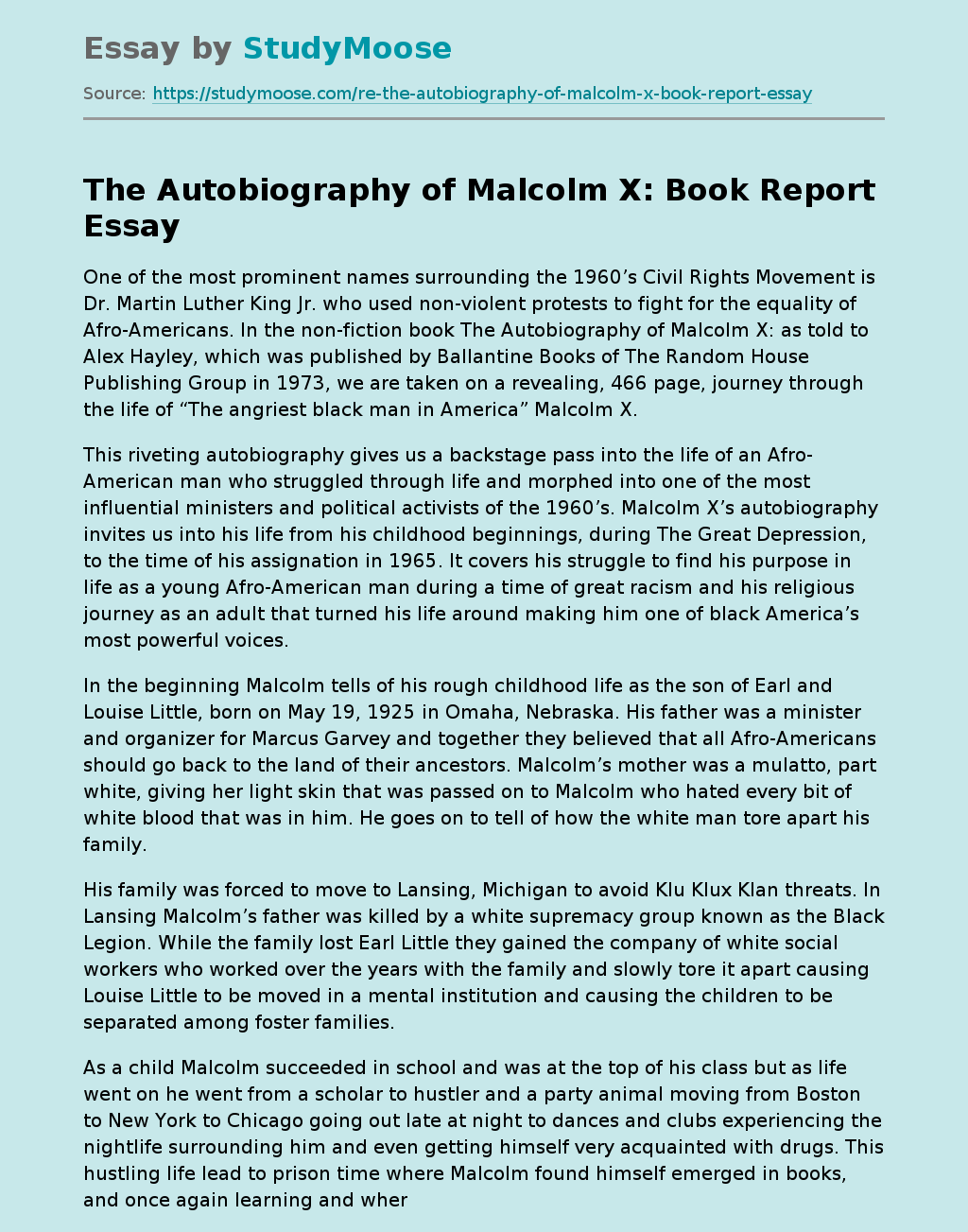