“Come. There is a way to be good again,” said Rahim Khan to Amir. In the novel the Kite Runner by Khaled Hosseini, Amir, the main character, expresses his thoughts and actions due to his baneful choices. The tribulations he faced were all repercussions of the sin committed by his disdainful youth. His sins ravaged the early stages of his life and gave him a troublesome memory full of guilt. As the novel progressed, Amir attempted to disengage the memory of his sin and forget about it.

Don't use plagiarized sources. Get your custom essay on
“ A Thousand Splendid Suns ”
Get custom paper
NEW! smart matching with writer

Amir soon faced the long over due road to redemption. Khaled Hosseini’s novel the Kite Runner is about redemption, and that the lifelong pursuit of happiness will never be fulfilled without it. At a young age Amir and Hassan were best friends, even though Amir was roughly expressing it. Amir and Hassan enjoyed many activities together as Khaled expressed in his novel: “I spent most of the first twelve years of my life playing with Hassan.

Sometimes, my entire childhood seems like one long lazy summer day with Hassan, chasing each other between tangles of trees in my father’s yard, playing hide-and-seek, cops and robbers, cowboys and Indians, insect torture… We saw our first Western together, Rio Bravo with John Wayne, at the Cinema Park…,” stated Amir. Amir stated all these “friend-like” activities, yet witnessed the sexual abuse administered by Assef and his goons on Hassan without a peep from his mouth. At this point Amir’s lust for obtaining the kite, so he could finally enjoy love from his father had over come his friendship.

That temporary love given to Amir by his father was enough for Amir to attempt to get rid of Hassan permanently, which worked. Amir’s sin committed in his early years set the stage for the rest of his life, for he would seek redemption for his acts. Many years passed, Amir was on his own now in America, with his wife Soraya that could not bare children. Amir received a call from Rahim Kahn who was dying and wanted a last visit from Amir. Amir had jumped at the chance to visit an old friend/father figure and flew to see Rahim.

Little did Amir know he was about to face all of the tribulations he had seemed to forget of his past ten fold. Rahim Khan reveals “Hassan, Amir’s childhood friend, the presumed son of the family servant was in reality, Amir’s half-brother, his father’s illegitimate son with Ali’s wife. ” He also reveals that the prolonged redemption is just around the Taliban by saving Amir’s half-nephew Sohrab (Hassan’s son) from Kabul. Amir was in a state of confusion, he expressed his plead to Rahim: “I can’t go to Kabul,” I had said to Rahim Khan. “I have a wife in America, a home, a career, and a family.

” But how could I pack up and go and go back home when my actions may have caused Hassan a chance at those very same things (talking to himself)? I wished Rahim Khan hadn’t called me. I wished he had let me live on in my oblivion. But he had called me. And what Rahim Khan revealed to me changed things. Made me see how my entire life…had been a cycle of lies, betrayal, and deceit. ‘There is a way to be good again’ he’d said. Thus started Amir’s road to redemption. Amir searched through Kabul for Sohrab and an orphanage leader had stated that Sohrab had been sold to a Taliban leader.

The Taliban Leader who showboated John Lennon glasses and conducted the stoning ceremony at halftime of the soccer game was the man that Amir had to speak with. As Amir conversed with the Taliban lead he learned of his cruel ways of massacring the Hazaras. Then the Taliban leader revealed, “What did you think? That you’d put on a fake beard and I wouldn’t recognize you? … I never forget a face. Not ever. ” The Taliban revealed himself as Assef, Amir’s childhood enemy. Assef created an ordeal stating that if Amir were to overcome him in a blood brawl, then Sohrab would be Amir’s boy to take.

Assef completely demolished Amir by breaking several ribs with his brass knuckles. Amir was barely able to stand, but he withheld the beating for he knew that destiny had brought him to this moment. The moment came when Sohrab had pierced Assef’s eye and he and Amir escaped. Amir had finally accomplished his self-turmoil and had almost completed his redemption by saving his half-brother’s son, and almost dying for him. Amir knew that he had to adopt Sohrab when they got back to a safe haven. This caused some trouble with the embassy for they required legal documents of the orphaned child.

Sohrab believed that there was no possible way for him to come to America and he did not want to return to an orphanage, so he attempted suicide. Amir had gone through a father’s worst nightmare when he thought his soon to be adopted son would die. Sohrab survived though, leaving a reckless, unrighteous Muslim, self- centered Amir behind. Amir’s pursuit of happiness was fulfilled as he and his son were flying kites in America. He had redeemed himself as he said to Sohrab, “Do you want me to run that kite for you? ”…A nod from Sohrab… “For you, a thousand times over,” and a smile cracked open on Sohrab’s face. 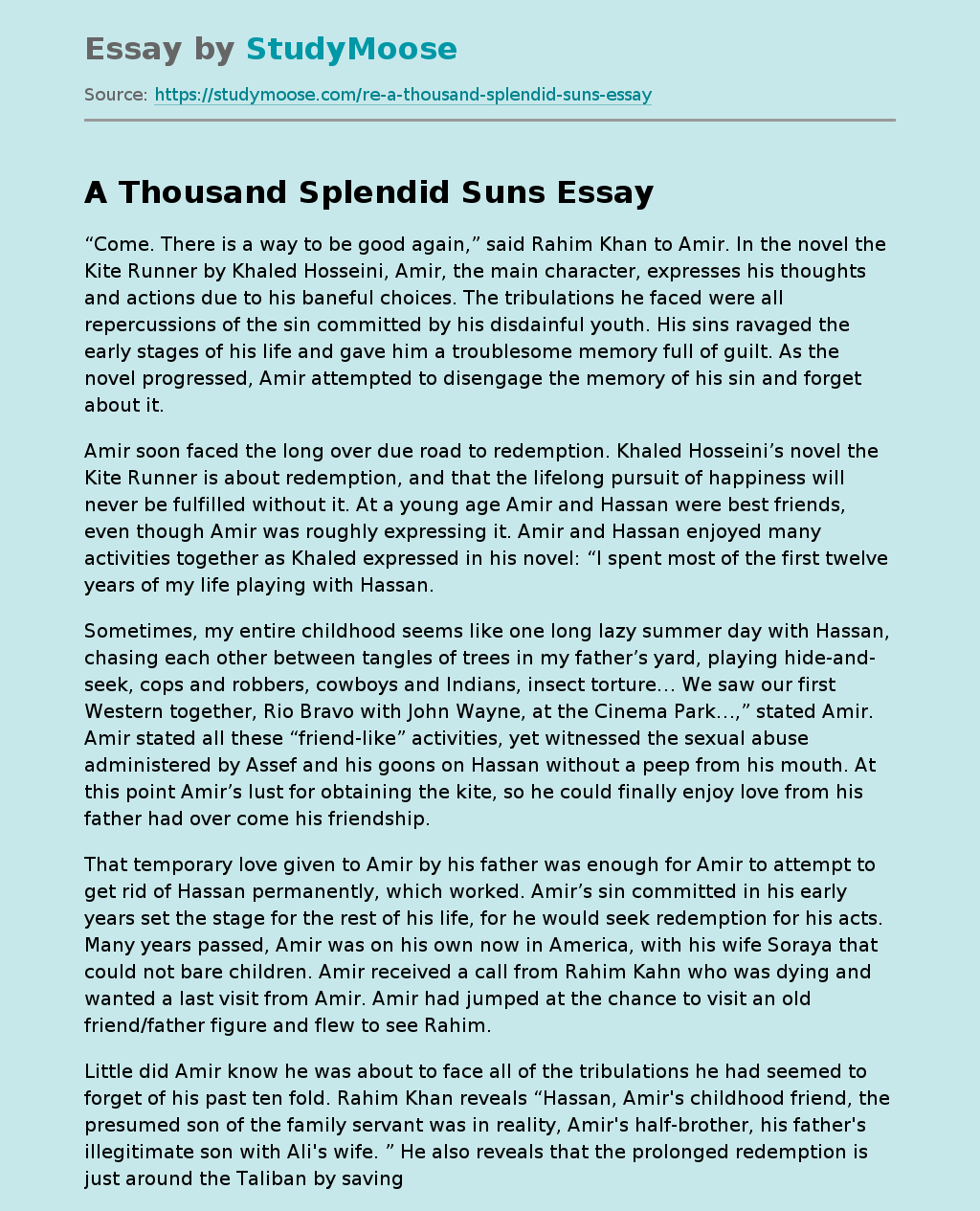