The theme of the short story is all about technology in which it deals with the dangers living in a society which is not only reliant on technology, but uses technology to control its citizens and to destroy those individuals who dare to exercise freedom of expression. At the start of the short story the writer sets the scene for the reader, both in time and place but also by describing the kind of society that exists in the future world.

Don't use plagiarized sources. Get your custom essay on
“ Ray Bradbury the Pedestrian Story ”
Get custom paper
NEW! smart matching with writer

In the short story the writer writes, “For long ago he had wisely changed his to sneakers”

This quote makes me think that the pedestrian used to be scared to be seen out at night and wouldn’t want to get noticed. But now he’s gotten over his fears and he will do what he wants and doesn’t care who sees. In the second section of the story the silence of the streets is dramatically broken by the introduction of the police car and in the way it stop Mead and calls him into account.

The fact that he alone is being confronted by the one remaining police car increases a growing sense of the pedestrian’s isolation.

This relates back to the theme of the story and how technology has taken over every other civilian in the city and now it is about to get the last free pedestrian and soon he will be just like every other helpless person sat like the dead in their homes.

This compares to the rest of the citizens in the city because they all sit at home and watch TV all night whereas the pedestrian would go out, but now the pedestrian is being held by the power of the state just like everyone else. In the third part of the short story, the pedestrian is finally defeated. The last human being as we know steps into the police car submitting to the power of the state. As mead gets in the car, “The door shut with a soft thud” This is a very odd sentence because of the contradiction at the end, where it says ‘a soft thud’.

This is odd because you would not normally have these two words beside each other because the way they sort of cancel each other out. After the police car takes Mead away, he makes his last defiant statement asserting his individuality, he comments “That’s my house” In this sentence, you can see the pride and dignity that Mead had and how he summed it up so much in just these three words. In this sentence it is clear how proud Mead is and how he is not afraid to speak out.

It makes the reader think that he was trying to tell the police car that he is just an ordinary person that has a home and a normal life, so he should not really be where he is. Similarly, Mead is just like his house, standing out from the other citizens. This is clear through, “All of its electric lights brightly lit, every window a bright yellow illumination, square and warm in the cool darkness” The way in how the house is described and pictured to the reader, very much relates back to the theme of the play and how it compares to the difference between Mead and all the other citizens.

Now that Mead has gone and the streets are back to “normal”, the writer leaves us a final message of how Mead was punished for standing out from the rest of the citizens and having a bit of individuality from the rest of the community. No matter what he said the police car was always going to take him away. This fully shows the power of the state. 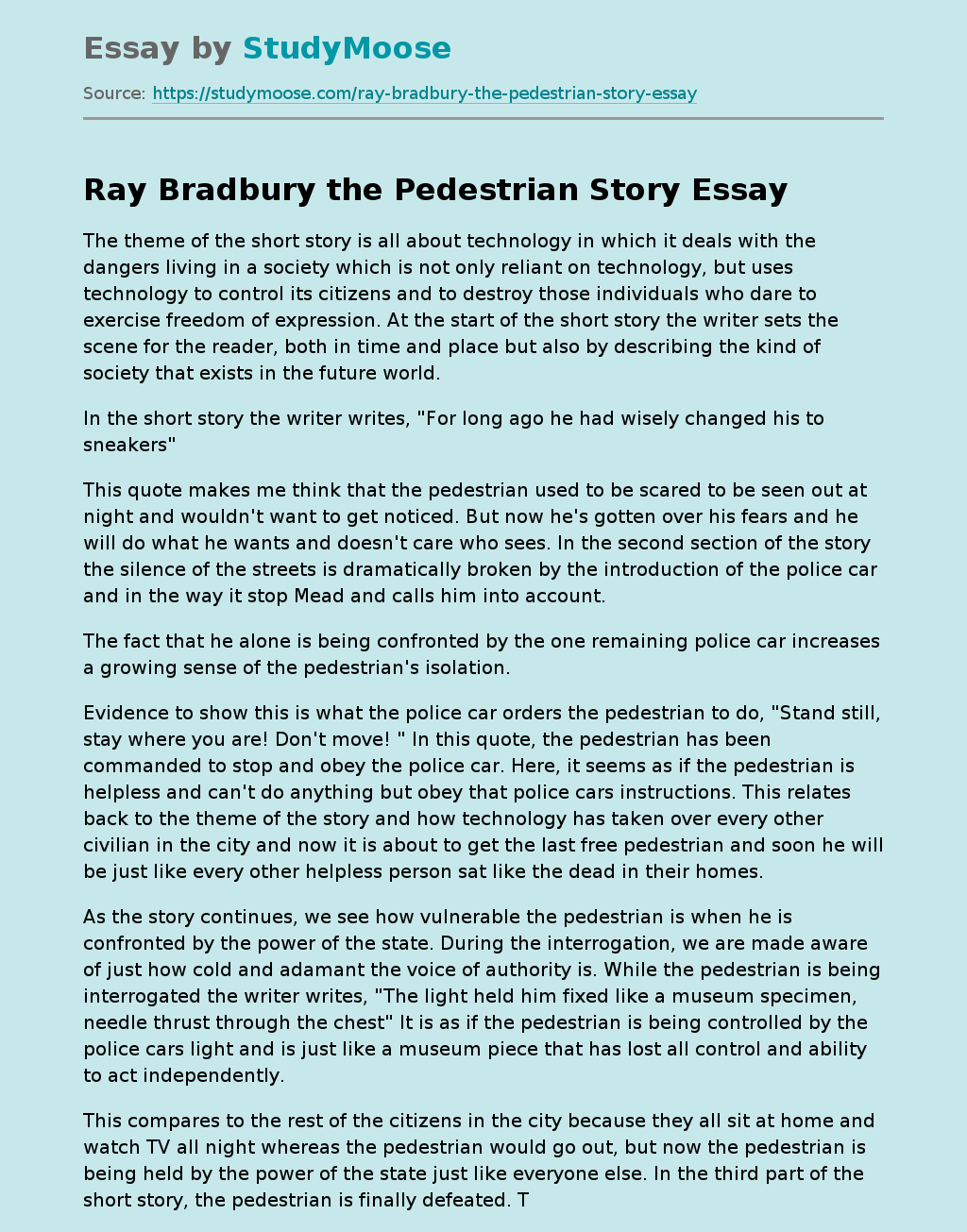