Raising The Minimum Wage is Bad

The state of Arkansas this past November on the voting ballot was the choice for citizens to vote for the raising of the minimum wage to $11.00/hr over the next three years. At first glance, someone might think that this is a rewarding change but when taking a deeper look into the subject, it will reveal a lot of consequences that will cause a lot of trouble over time. Cost of living is going to rise, businesses will be less likely to hire when needed, unemployment numbers will rise and simple things such as a hamburger at McDonalds will go up.

Don't use plagiarized sources. Get your custom essay on
“ Raising The Minimum Wage is Bad ”
Get custom paper
NEW! smart matching with writer

Currently the minimum wage in the southern United States averages around $8.00/hr.(LaborLawCenter) This is the reason housing is so much cheaper in the south than living in California where the minimum wage is $12.00 or New York where it is $11.00. Now imagine this, Arkansas having the same minimum wage as New York. There are four major entities that affect cost of living; housing, taxes, healthcare, food.

The average rent for a 1,000 sq.ft. apartment is roughly $3500 where the same size apartment will run you around $800 in Arkansas (RentCafe.com). Housing cost 379% more in New York when compared to Arkansas. Health insurance rates will skyrocket as well. The average health insurance for Arkansas is right around $2800 (Valuepenguin.com) with New York coming in over double the price with at $6800.(Empirecenter.org) When businesses raise a minimum wage, they’re also having to give raises to the employees who make more than minimum wage.

Who wants to go to a four-year school, spend thousands of dollars for classes and then come out making $15/hr for a nursing job when they could go flip burgers at the local burger joint for $11 and not be liable for someone’s life? When employees get raises, then the cost of goods rise as well affecting the overall cost of living. Along with cost of living going up, there will be a rise in the unemployment rate as well. It is simple economics when it comes to this aspect of raising the minimum wage. Non-skilled labor jobs are easy to come by. An employer will pay “X” amount to this position. When the wage gets over that threshold, the employer will be less likely to hire for this position. What this equals is that position going away altogether, instead of being paid a lower wage. Now that job along with the services it provided are gone.

Economist Richard Vedder quotes “If the price of something rises, people buy less of it—including labor. Thus governmental interferences such as minimum-wage laws lower the quantity of labor demanded.” What he is saying is basically clarifying what is written above. On February 2017, Wendys CEO Bob Wright states there is a 4% increase in wages across the board in his company. “First, they could cut margins, but with an 8% margin, that’s unlikely. The second option is to raise prices. Given how price-sensitive consumers are these days, that too is a non-starter. Finally, the firm could reduce the amount of labor they use… and that’s exactly what they did. Wendy’s eliminated 31 hours of labor per location, per week.”(businessinsider.com) Now, the whole purpose of raising the minimum wage was really aimed at this market of employees which are the non-skilled jobs. Well, now that they have cut hours but the business is open so what now. Wendy’s CIO David Trimm states “they will be installing automated ordering kiosk into 16% of their stores by the end of 2017 and their machines would pay off in a two year time frame because of the savings by reducing wages. Wendy’s is not the only one going to the automated route. McDonalds is going the automated route also specifically in the New York and Seattle Markets.(businessinsider.com) Why those markets? Because they have some of the highest minimum wages in the nation.

As long as states continue to raise minimum wage, these low skilled jobs will be killed off. “In a survey of 1,213 businesses and human resources professionals, 38% of employers who currently pay minimum wage said they would lay off some employees if the minimum wage was raised to $10.10.”(https://minimum-wage.procon.org) That’s not even $11.00 an hour or an even higher wage as some think it should be. Taking an educated guess, that number would be pushing 50% at $11.00. If there is a company ten employees making minimum wage at $10.10, that is $404 a week. Going up to $11 would mean an additional $36 a week. Given that employee is full time and works a full forty hour work week. They would make an additional $1,872 a year for one employee. Now the company has ten employees, that is a humongous increase of nearly $19,000. Depending on the business, that could be the entire budget for the year. Now that company is having to layoff to afford to pay rent, utilities, and insurance on their building. For a small business paying ten high school kids $8.50/hr for 17 hours a week. That is $1,445 per week and $75,140 for the year. With the increase to $11/hr that yearly figure now goes up a whopping $22,100 for the year. The employer is going to cut hours and/or employees to get that cost back down to a manageable figure.

Minimum wage jobs are aimed at students and young adults that are making money while furthering their education. 50.4% of all minimum wage jobs are held by kids and young adults aging from 16 – 24. Most employers are going to be less likely to hire a 16 year old high school student for $11/hr that they deem worthy of $8.50/hr. There is a catch phrase used commonly when talking about minimum wage and that is “you can’t raise a family on minimum wage” Minimum wage is not designed to raise a family on. It was created in 1938 by President Roosevelt and “was intended to deliver fair labor standards throughout the country”(historynewsnetwork.org) The unemployment rate for ages 16-19 is roughly 20%, increasing the minimum wage is only going to make this number go up. A lot lower than other age groups proving that a high minimum wage is causing employers to not hire unskilled workers. In 2009 when Chicago raised their minimum wage, there was a 9% spike in teenage unemployment in three months. According to a study by Thomas A. Mroz, PhD, and Timothy H. Savage, PhD, for the Employment Policies Institute, ‘those experiencing unemployment at an early age have years of lower earnings and an increased likelihood of unemployment ahead of them.’ Teenagers and young adults need jobs at their age to teach them life values like going to work when you really do not want to, getting along with co-workers when times are rough and the feeling of accomplishment of finishing a project or goal at a job. Without these, there would be a lot more unemployed teenagers which is only going to lead to higher crime rates and more unemployed adults. The last example of why a higher minimum wage is bad is the cost of goods will increase. Other than automation which was discussed earlier the establishment is going to pass the rising labor cost onto the consumer at a 100%. Higher wages in hotels are going to cause an increase in guest rooms and meeting rooms.

A simple cup of coffee in Oakland, CA rose 10-20% when the rate was increased to $12.25. When the minimum wage was raised to $10 in Chicago, a cup of coffee jumped 6.7% (NBCNews.com). Hamburgers are either going to increase in price or the size of the patty is going to decrease to help offset the labor cost. In closing, there have been several examples discussed of why raising the minimum wage is not a great idea. It is not designed to live on nor provide for the family. It will only make the the low income individuals fall into poverty level income. It will push employers to either lay off workers or close up business completely. Teenagers are less likely to find work which will lead to higher dropout rates of school, higher crime rates and even more of a percentage of citizens unemployed and living in poverty followed by the skyrocketing of the cost of living in general. The minimum wage should be used as a floor of wages and utilized as a stepping stone in the workforce and not a way of living forever.

Raising The Minimum Wage is Bad. (2021, Aug 02). Retrieved from https://studymoose.com/raising-the-minimum-wage-is-bad-essay 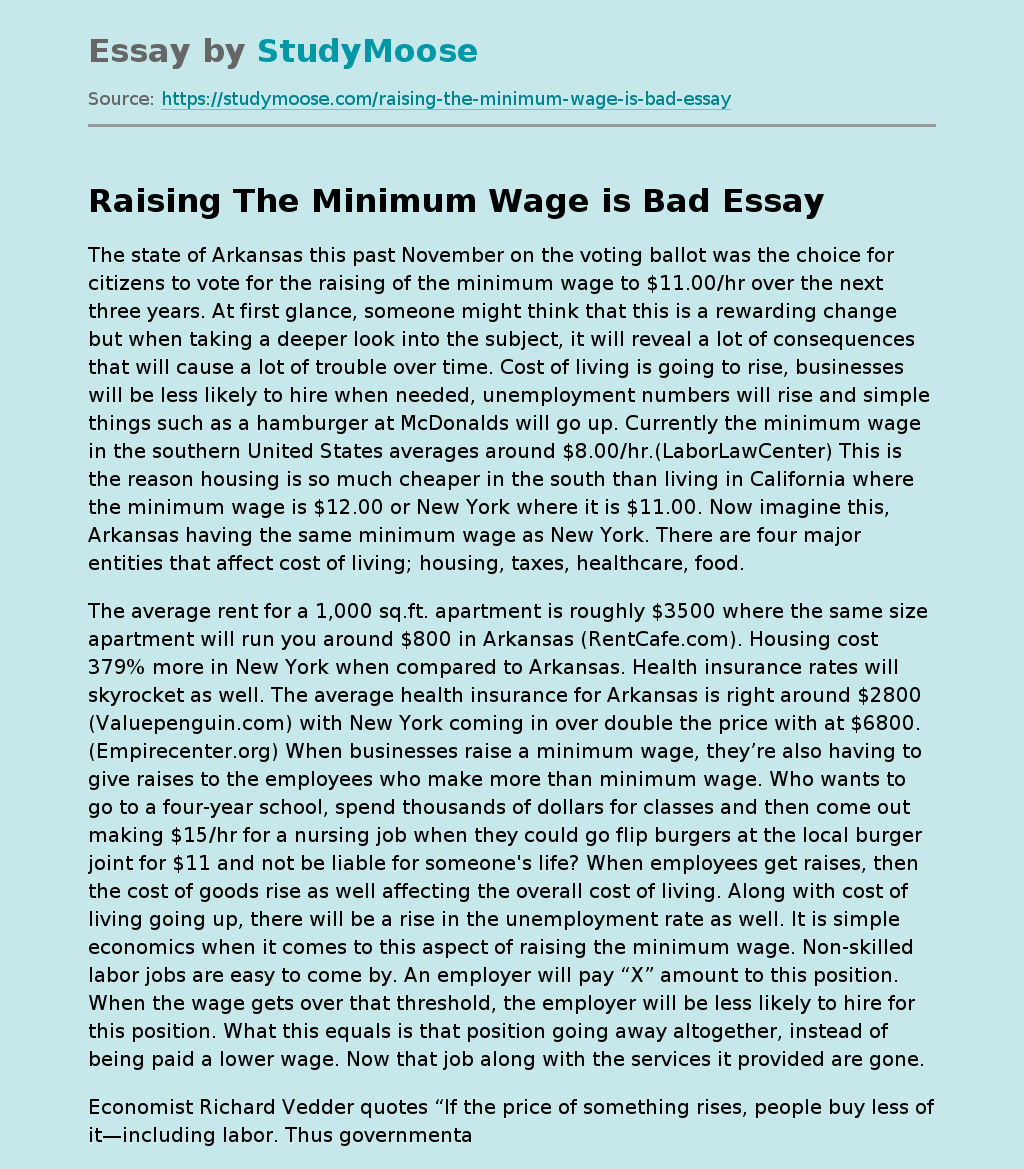