Throughout the history of women we have had fewer legal rights and career opportunities than men. In earlier centuries wifehood and motherhood was regarded to be the women’s most significant profession. Women prided themselves on how well they worked around there house and who was able to make sure there husbands were content with the work they did at home. Finding a voice somewhere along the way women have made quite a reputation for themselves.

Since the 20th century, however, women in most nations have gained the right to vote, increased their opportunities to excel in better jobs, and have received an enhanced education.

Don't use plagiarized sources. Get your custom essay on
“ Professions of Women ”
Get custom paper
NEW! smart matching with writer

Women have reevaluated the traditional views of their role in society today. Virginia Woolf could not explain the profession of a women any better than what she did. How have the women from nations around the world developed their roles in today’s society? Are women more accepting to jobs that are “made” for them or do they try to excel and achieve more than expected to?

I have seen many women have different actions toward their situations and each one have had different outcomes.

Although each of their situations and outcomes were different women have made a difference in the growth of our individualism and I believe it will continue to grow. I feel that Woolf’s writing could be very influential to women all over to never back down from a challenge. Virginia Woolf was an English novelist, feminist, and a writer of short stories.

Woolf began writing professionally during the year 1900. She was educated at home by her father. After his death in 1904, she, her sister, and her brothers moved to Bloomsbury.

As her writing career took off, Woolf’s writing explored the concepts of time, memory, and people’s inner consciousness. Her writing was recognized for its humanity and depth of perception. Woolf was interested in defining qualities that were specific to the female’s mind. She saw female sensibility as intuitive, and wanted to liberate the masculine intellect from what she viewed as its enslavement to abstract concepts. In 1912 she married Leonard Woolf, a critic and writer on economics and politics. In 1931 Virginia wrote an essay called “profession of women”, and became the narrative of women progress of feminism.

Virginia Woolf died on 28 March 1941 when she drowned herself in the River Ouse near their home in Sussex, by putting rocks in her coat pockets. Woolf identified with an experience that stood out to me the most. The angel in the house was most interesting to me because of how she viewed women and how they should act towards men. On page 883 the angel in the house said, “You are writing about a book that has been written by a man. Be sympathetic: be tender; flatter; deceive; and use all the arts and wiles of our sex. Never let anybody guess you have a mind of your own. Above all, be pure.

Are women supposed to hold themselves superior to men? First and foremost I do not feel women should yield their rights to anyone in this world. Giving praise to people is fine, but lying about it to preserve someone else’s feelings is useless for the simple fact that the society we live in today will not yield to our feelings. When we falsely praise someone’s work what good could come from it? All I see is bad because what you lie about and say is good, the “real world” will bluntly say this is crap and not good enough. Woolf looked at telling lies in her reviews, being the only way she could succeed and be successful.

Back then women did not have rights to speak out against men, it was morally incorrect. Now women have the ability to write and say what they feel. When women yield their rights to men, a man will take advantage of you because he knows he has that kind of control over you. I also feel once you give constant praise to any man he will become boastful. If a man knows how smart or talented he is then he will be cocky and an ass to everyone. From the early nineteenth century there were three waves of feminism to give women equal rights that white men have obtained from earlier years, which are still presently happening today.

In the United States we have worked hard to get rights just to have a voice in the government. So simply reverting back to our old ways and catering to men’s needs would be slapping the women that fought to make our future brighter. After fighting for many years I do not feel or believe we should yield our rights, only to satisfy a man’s ego. Although The Yellow Wallpaper is a fiction reading, the woman ignored her needs to make her husband feel like his diagnosis was the right thing for her. By not speaking up it eventually drove her insane. I think all women should be independent and speak their mind.

God gave us a brain so why not use it to benefit our well being. Going back in history women were not allowed to educate themselves in any aspect of school. We did not have the capabilities to diagnose problems that were wrong with the human body. Although women did not have the knowledge to do so, I am pretty sure women would know what was wrong with them mentally and physically. This goes for everyone, no doctor, no individual being, can tell you what disorder you have. I think if you know what you need to cure what ever you are going through then do so.

Doctor’s are there just to make sure you are on the right path and could possibly give direction of a better understand of how the body works. No one knows you more than yourself. There is a saying that states, “Behind every great man there is a great women. ” My father is indeed a great man, but he wouldn’t be where he was today if it was not for my mother. My mom was not always sympathetic to my father, nor was she catering to my father’s every need. My father is a successful business man with the help of my mother. Eleanor Roosevelt was the first lady of house for a 12 year span.

While Franklin Roosevelt was out dealing with the depression crisis in the United States, Mrs. Roosevelt dealt with minor civil issues like segregation and women’s rights. Mrs. Roosevelt used her weight in the media as a way to connect with women who found themselves in domestic isolation. With this in mind, Eleanor used three mediums to keep in touch with her female followers. She used the press conference, a daily newspaper column, and magazine articles. These three means opened up the communication into a two-way channel.

Although her purpose was to initially speak to the women of the United States, her concerns favored humanitarian, but she did stay true to the women issues. There are many more women who do great things that are overlooked because their husband’s carry such high statuses, but their voices do not go unheard. I am sure FDR had his disagreements with his wife, but she never sugarcoated her beliefs because he was politically at a higher standard. Just like the angel in the house Eleanor embraced his politics and let him know what women would want, and he listened to her.

Just know no man of any kind will sugar coat how he feels about you, so why should women? Women who have not accepted their role as a housewife have paved pathways for many women to come. Oprah Winfrey not only had the obstacle of being a woman in the business world, but being of the African American descent as well.

According to most people she is recognized as the most influential woman in the world. In 1974 Oprah could have made a living once she reached a co-anchoring position at a local radio broadcasting show, but that was not enough. 976 she excelled to be the youngest and first black women to become a news anchor in Nashville, Tennessee on WLAC-TV. By 1983 Oprah had taken over a low rated TV show that aired in Chicago to a nationally viewed talk show renamed after her. Now in 2010 Oprah has the highest rated talk show in history of the world, she has been ranked the richest African American of the 20th century, and the greatest black philanthropist of America. Settling for what is giving is not enough. Women have to give more of them just to be considered half as good as men. Not only Oprah but many other women have opened doors to better jobs.

Politically, Hillary Clinton has excelled to clenching a job in President Obama’s cabinet. She has given hope to young women of America that the president’s position could be held by both men and women. Amelia Earhart opened the field of aviation for women in 1928. Many of other women have added themselves to the history of women by simply accomplishing things men have done too. No job should be limited to only males. I feel women could do any job a male can do if not better, but that is based on opinion. I think every woman has the Angel in the house. Many women today still play their traditional role from the early 1900’s.

It is not that they are not strong enough to kill the Angel; it is just something they feel is what women should fulfill. Many women have grown out of the stereo typical view of what a women’s role should be and have excelled to do great things. We are all individuals that have brains and should use them to the best of our ability. We are given educational advantages to go to school and learn for free. “Use the talents you posses, for the forest would be silent if the only bird that sings was the best. 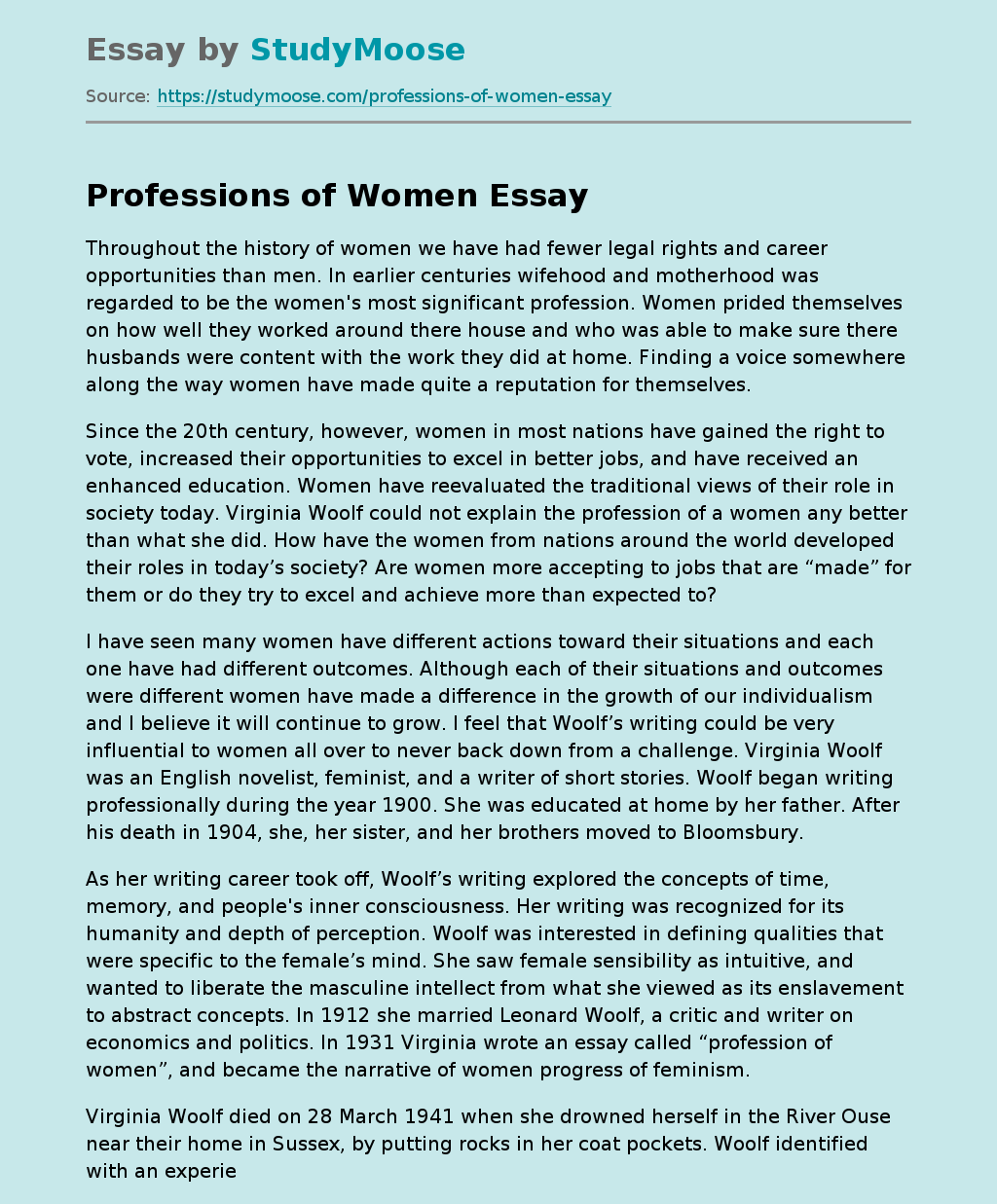