Report by the BBC

In a report by the BBC governors it is stated “Since this report was first presented to the Board in January 2005, ITV has, with Ofcom’s approval, reduced its commitment to religion from 104 hours in 2004 to 52 hours in 2005.

Don't use plagiarized sources. Get your custom essay on
“ Priest Idol ”
Get custom paper
NEW! smart matching with writer

BBC One has maintained its commitment to 80 hours of hours in 2005/6 so now commits to more hours of religion than ITV.” ITV showed 4 religious programmes lasting for 2 hours 10 minutes, whereas BBC1 shows 4 programmes totalling in 3 hours and 10 minutes.

This is not much; especially I was looking at 4 channels. Out of 4 channels the religious programmes only take up 2% of the total broadcasts. The majority of the religious broadcasts also tended to be on a Sunday.

Also, out of the religious programmes shown there are only two programme that aren’t Christian. OU: Two Religions, Two Communities and Preachers To Be are the only programme which isn’t specifically Christian out of the above programmes.

The 4 main channels are available to everyone in the country, so Christian programmes tend to be the religion shown as we live in a Christian country. However there are TV channels dedicated to other religions such as Islam and Judaism. Programmes on other religions are much more likely to be found on such channels. Although religious programmes aren’t shown much on the 4 main channels, other channels available through subscription such as ‘The God Channel’ show religious programmes all day long.

Channel 4 mainly shows reality TV programmes, and this is reflected even in the religious programmes it shows. The 2 main religious programmes shown are Priest Idol and Preachers To Be. Priest Idol follows a vicar trying to draw more people into the church over a 12 month period. The title makes it seem to be similar to the popular series ‘Pop Idol’ which is about singers dreaming of rising to fame, but it’s completely different. The programme is about a vicar who is given twelve months to increase the numbers of people coming to his church. The TV bosses allow him to spend whatever amount of money the priest feels necessary (which they will pay for) to do so.

A spokesman for the show said that the vicar will not be ‘selected via a Pop Idol style talent contest’ and that the aim of the show was to simply televise the vicar’s efforts. The spokesman also said that they are looking for ‘someone with energy who is prepared to work in a place where there is a clear need for regeneration.’ However a spokesman for the Church of England said that he didn’t agree with the show being called ‘Priest Idol’ because “We obviously need to see how the programme pans out, but for the moment we would like to see a better title,” he said. “Priest Idol is too reminiscent of Pop Idol, and that wouldn’t be a suitable format.” Pop Idol was an extremely popular show, and the show’s producers are aiming to draw an audience with the title. Priest Idol gives the impression that it’s similar to Pop Idol and will be more modern and appealing to watch than if they called it “A vicar and his church.”

Reality TV programme “Preachers To Be”

Preachers To Be is also a reality TV programme, in which the journeys of 3 people training to be preachers of different religions. It’s also shown on channel 4, and is a documentary about the preachers’ lives. Although they are from different faiths, the preachers are extremely motivated and enthusiastic about their religions and are trying to publicise their beliefs. The preachers are of Christianity, Hinduism and Islam and the preachers are young. Channel 4 regularly shows reality based documentaries about everyday issues which are not as publicised as others, and the programme is trying to draw attention to less known issues.

We do not live in a deeply religious society where religion occurs in normal day to day activities, and this is reflected in what’s shown on TV. The majority of people in today’s modern society are more interested in having soaps and news on their 4 main channels, and subscribe to religious channels if they want religious programmes.

In conclusion there aren’t a lot of specifically religious programmes on the 4 main television channels. The majority of the ones that are shown aren’t shown at prime times when the majority of people watch TV such as Saturday between 8 and 10. Instead they’re shown from the early hours of the morning to mid afternoon. This is because people today tend not to be as religious as in the past, and therefore there isn’t a high demand for specifically religious programmes on TV. 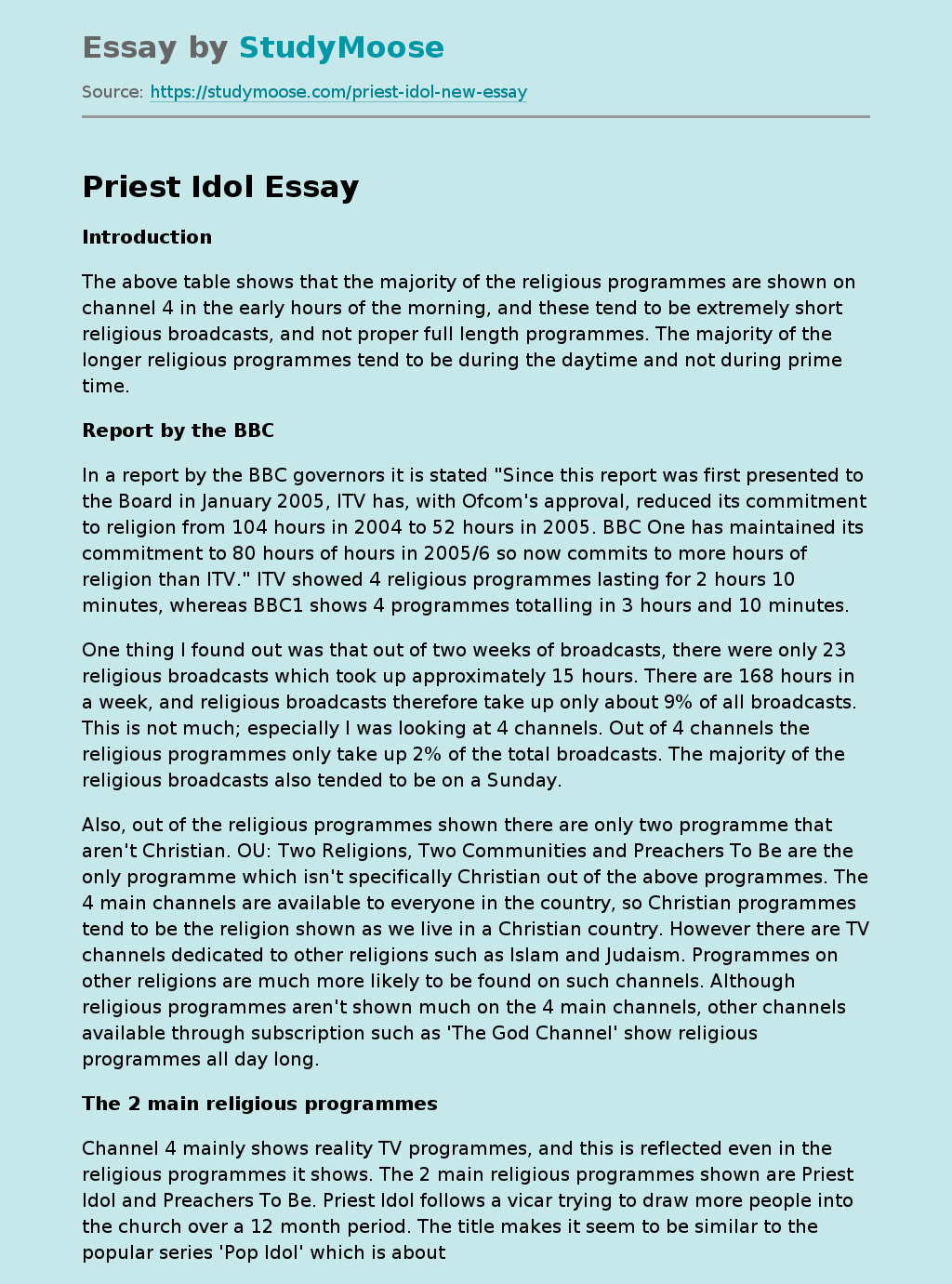