In a court of law everyone is presumed innocent until proven guilty by a judge and/or a jury consisting of their peers. This is the basis of the presumption of innocence clause. There are many cases that we can look at in order to provide a detailed explaination to this clause. The one the we will review in this paper is the Casey Anthony case. This is a perfect case to review for this cause. The Presumption of Innocence clause involves the fifth and fourteenth ammendments which will be further explained.

Don't use plagiarized sources.
Get Your Custom Essay on Presumption of Innocence Just from $13,9/Page

When we are dealing with people or are thought to be guilty of any crime we need to remember this clause and give them the benefit of the doubt that they actually did not commit the crime until we can prove that they actually did. This paper will discuss all of these things and more to provide people with a better understanding of the Presumption of Innocence clause.

Presumption of innocence is defined as “the government always has the burden to justify its use of power even against people who turn out to be guilty.

” (Samaha,p481) This basically means that it is the prosecutions responsibility to present evidence and to convince a jury that a criminal is guilty of the crime in question. A suspect in any crime should be considered innocent until proven guilty in a court of law. When a person is arrested we automatically assume that they are guilty of whatever crime they have committed but have you ever seen someone get arrested and be released after their trial was over because a jury found them not guilty? I believe everyone has witnessed this occurance. We may not like to discuss it but they Casey Anthony case is a big case that deals with this.

Casey Anthony was arrested and tried for the murder of her daughter Caylee Anthony in 2008. Evidence used to detain Anthony included a nine inch piece of hair obtained from the trunk of Anthony’s car, a prestigious scientist found an abundant level of chloroform in the trunk of Anthony’s car, The piece of hair found in the trunk was proven to be that of Caylee Anthony as well as proven to be that of a postmorteum Caylee, and a rare kind of duct tape that was found on Caylee’s body was also found within the Anthony family garage. There was so much evidence proving her guilt but a jury found her not guilty due to lack of hard evidence.

The jurors for this case wanted more evidence against her that they did not receive from the prosecution, in which is the reasoning behind finding her not guilty. Personally I think she did kill her daughter or had some part in the killing. Again that is my personal opinion but some people think she is definitely innocent. There is never a sure way of knowing whether or not that person is guilty unless there is hard evidence to prove it or the criminal was caught in the act and everything has to be right on point.

I do not think that there is ever going to be a sure way to prove a person guilty upon their arrest because in order to do so we would have to honestly have a group of peers look upon any given case and say that the person is definitely guilty. Again that will never happen! The only crimes that I believe is an absolute guilty is driving while intoxicated or knowingly driving with a suspended or revoked license. There is really no way in being innocent when you are caught for these crimes. All in all just about everyone that gets arrested should be considered innocent until proven guilty in a court of law. 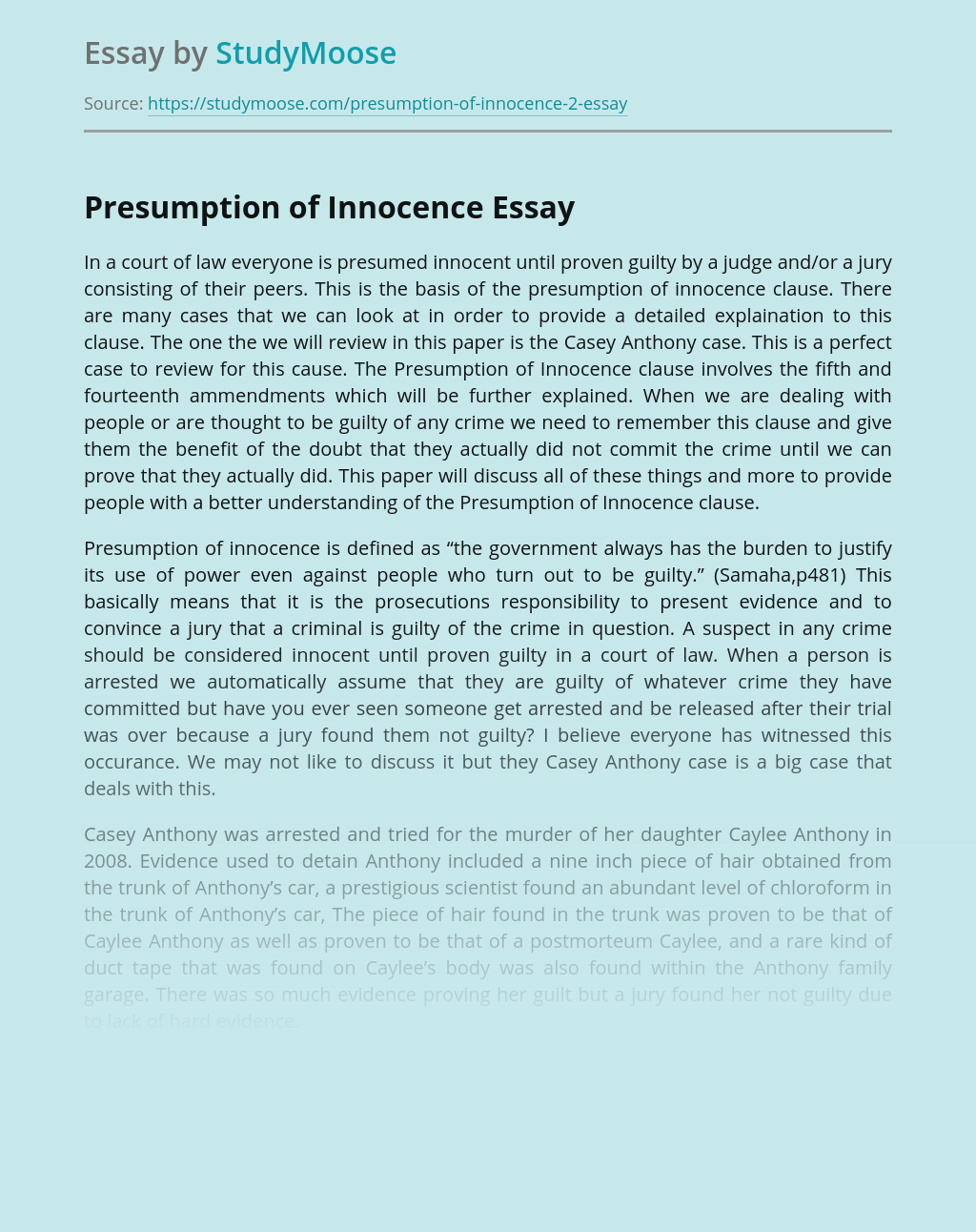 The movie “Twelve Angry Men” is a film about twelve jurors in a murder trial deliberating the guilt or acquittal of a defendant on the basis of reasonable doubt. All of the jurors come from very different backgrounds and see things in very different perspectives. This essay will be analyzing the group discussion that was...

My role with the _____ County circuit courts varies pretty much daily. Originally I was assigned to circuit court three. As it turns out though, they have had a high school intern coming since the beginning of the semester also, who is interning for a class she has. I believe she comes in three times...

On any week night, he or she can pick up the remote control and start channel surfing. Coming across two or three law enforcement related shows such as Law & Order or CSI is not uncommon. Watching Law & Order, the entire criminal justice process unfolds right before our eyes in about 60 minutes. We...