Pop Music and Effect of K-pop in the Philippines

It’s quite ironic how a lot of Filipinos nowadays are so engrossed with Korean pop songs and dramas. I myself fall flat on my knees to these songs. I consider myself as a Kpop addict as well. When I was in college, I use to smile when I see a group of Koreans in the corridors of our building. It was like seeing a Korean actor look-a-like. I was also amazed at their tagalog! Sometimes they were more at ease speaking tagalong than English.

Don't use plagiarized sources. Get your custom essay on
“ Pop Music and Effect of K-pop in the Philippines ”
Get custom paper
NEW! smart matching with writer

Although I don’t speak Korean at all, meaning I don’t understand a word from the Korean songs I listen too. I don’t understand why I keep buying the albums, or download the songs. It’s as if I’ve been magically hypnotized. I think it’s because of the local TV stations broadcasting all these Asian dramas that the Filipino youth as well as the young at heart are drawn to these.

Anyway, all the OFW’s reading this might get shocked when they come back here in the Philippines.

Don’t worry seeing loads of Koreans in malls, schools, the local train and buses is just ordinary. It’s nice to know that many foreigners are opting to live here. I just hope that as Filipinos, we too, have that kind of impact on foreign countries. It would be nice to see that foreigners singing our songs, watching our dramas, speaking tagalog, or cooking our dishes.

HOW IT START IN THE PHILIPPINES

K-Pop was born in the Philippines indirectly through the Koreanovelas in 2003.

One of the first Koreanovelas aired in the Philippines is Autumn in My Heart, the first season of the Endless Love series, which was aired on GMA-7 in order to compete with ABSCBN-2’s highest-rating Chinovela, Meteor Garden. It is in Endless Lovethat K-Pop started proliferating the airwaves most oftentimes with the Filipino remakes of its soundtrack.

Most of the Koreanovelas in GMA-7 had the Philippine theme song be performed by Faith Cuneta whose remake for Winter Sonata (Endless Love 2) pushed her up to stardom and made her be recognized as the ‘Diva of Koreanovela’. During the same year, one of the first Korean music videos in the Philippines was aired on Myx, a local music channel, which emotional theme caught many viewers. This is the music video of the Korean female group known as Kiss for their ballad, Because I’m A Girl. Not long after, the music video of Korean singer Mina for her first album’s carrier single, Answer The Phone, also entered the local music scene.

Eventually, in 2004, both of these songs were remade by Roxanne Barcelo in her debut album, Roxie. Kiss’ Because I’m A Girl was made Filipino as Kung Alam Mo Lang, whereas Mina’s Answer the Phone was translated into English retaining its original title. In 2005, K-Pop’s indirect fame expanded from the realm of the television to the theatres. The Korean hit movie, My Sassy Girl, was dubbed into Filipino and was released on Philippine theatres on October of that year.

The movie’s theme song, I Believe, which was originally sung by Korean balladeer Shin SeungHun, was also remade by Jimmy Bondoc into Filipino still using the same title. Going back to the television, following the success of Endless Love came Full House in 2005. Full House also starred the same actress from the first season ofEndless Love, Song HyeKyo, who was paired with Korean singer-actor Rain. Rain’s debut in the local television paved way for K-Pop to be more known in thePhilippines. Not long after the airing of the said series, his music videos such as I’m Coming and the more recent Love Story started to enter the charts of Myx and local FM stations. Because of his popularity among the Filipinos, Rain was also recently offered to do a shampoo commercial which was aired here in the Philippines.

IMPACT OF KPOP IN FILIPINOS

Korea is emerging in the 21st century as a major exporter of popular culture. K-pop has been embraced by the South Korean government as a tool for soft power abroad, particularly towards youth. K-pop has come from humble beginnings to gain a huge fan base not just in Asia but also other parts of the world, and is considered by some to be South Korea’s greatest export because of its popularity and growing influence. As South Korea continues to develop its IT infrastructure, K-pop music is being shared over the internet and through mobile devices more rapidly than ever. One of the biggest examples of the globalization of KPOP is the emergence of PSY’s “Gangnam Style” on the market.

In October 2012, Psy became the first South Korean artist to hit the number 1 spot on top UK charts. US President Barack Obama has noted the rapid surge and spread of Korean pop culture. During an official visit to South Korea in March 2012, he praised South Korea’s youth for their tech-savviness and optimism, and remarked: “ It’s no wonder so many people around the world have caught the Korean Wave — hallyu ” Prior to the rise of social media networks, K-pop concerts and related events outside East and Southeast Asia were mostly unheard of. However, with the growing acceptance of Youtube during the late-2000s as a popular music sharing plattform, K-pop has since become increasingly well known in many parts of the world, including the West.

According to The New York Times, “attempts by K-pop stars to break into Western markets had largely failed prior to the proliferation of global social networks.” However, K-pop artists are now gaining more international exposure through social media networks such as YouTube, Facebook, and Twitter, making it easier for them to reach a wider audience. In 2011, Billboard launched the Korea K-Pop Hot 100 chart and YouTube created an official K-pop channel.

Pop Music and Effect of K-pop in the Philippines. (2016, Apr 29). Retrieved from https://studymoose.com/pop-music-and-effect-of-kpop-in-the-philippines-essay 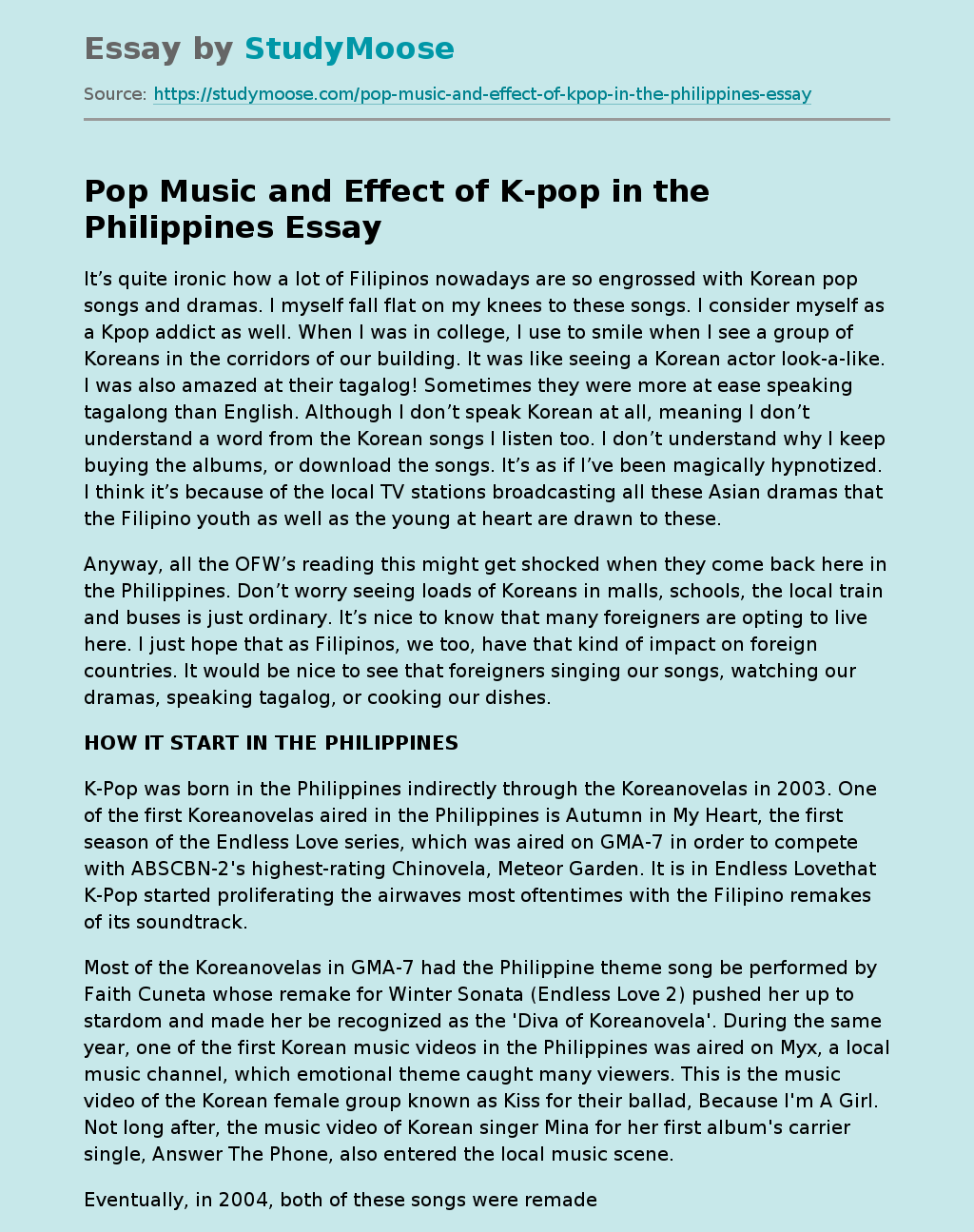