In I Hear America Singing Walt Whitman paid tribute to the workers of America. Whitman included every worker that he could think of, including the women and the girls who stayed home and do house chores. Whitman pictured them as happy and contented people who put dignity and respect in labor. In the poem the worker carried the physical burden of his work with a light heart that made him sing. In the first line, the entire country was euphoric and they sang different songs in unison.

Whitman used varied carols to describe the emotion of America.

Carols were usually sang on Christmas seasons when people were upbeat and matched perfectly the celebratory mood of the holidays. In the poem the Americans did not sing ordinary songs but those like carols which were mostly cheery and bouncy. He started off with the mechanic whose song he characterized with strength and blitheness. The carpenter lay down the plank and put up the beam.

His job was physically demanding but he still managed to sing. The mason looked forward to another day of work and he sang along the way.

Anything that we are eager to face everyday as something that gives us pleasure is reason enough for us to sing out our feelings, which was exactly the case of the mason in the poem. The boatman sang out the things he needed for his boat was a novel way of doing his job of checking the tools of his trade. The deckhand sang from the deck where he can see the vast expanse of the sea.

This was how he gave in to his feelings of exhilaration, freedom and joy. Creativity flows from the shoemaker and the hatter as they each went about their routine work.

Whether sitting down or standing up they were at their most comfortable that singing came naturally easy for them. In the woods and in the farms, the song came from the cutter and the farmer as they labored from sunlight to sundown. Their task can be back-breaking but by singing they lightened their burden and provided themselves respite especially at midday. The women who did the cooking, sewing and washing also sang to cast away their boredom and in its place welcomed the gladness in doing their domestic chores for their love ones. Walt Whitman spoke of lightness of feelings, despite the demands of work. He used contrasts in the poem.

He associated work with heavy and song with light. He made an attempt and succeeded in uniting or putting the contrasts together by making the worker sing. The worker sang not to please an audience but he sang for himself. Singing did many things to the workers: sustained the jolly mood of the mechanic, lightened the load of the carpenter, opened the exciting day of the mason, puts novelty in the boatman’s job, let the thrill in to the deckhand, fed creativity in the routine for the shoemaker and the hatter, provided a restful break for the woodcutter and the farmer, and took the boredom away and inspired the women in their home chores.

Walt Whitman used free verse in I Hear America Singing as well as imagery of men with different occupations giving in to the urge and lightness of feeling to want to burst into a song. With free verse he was able to compose a picture of uncontained happiness of a man in doing his job. Free verse was suggestive that work was not a bondage to the man but the source of his joy.

Whitman made an unrestrained enumeration of workers who sing as they work, giving the readers an impression that there were many of them with similar attitudes and feelings towards their work. In the title, it was not the workers he heard singing, but the whole country of America. Again, with the free verse, his scope was not limited to those he enumerates. He collectively hears everyone in America. The working man is America, whatever his occupation may be. He gives tribute to the workers, he gives tribute to America. 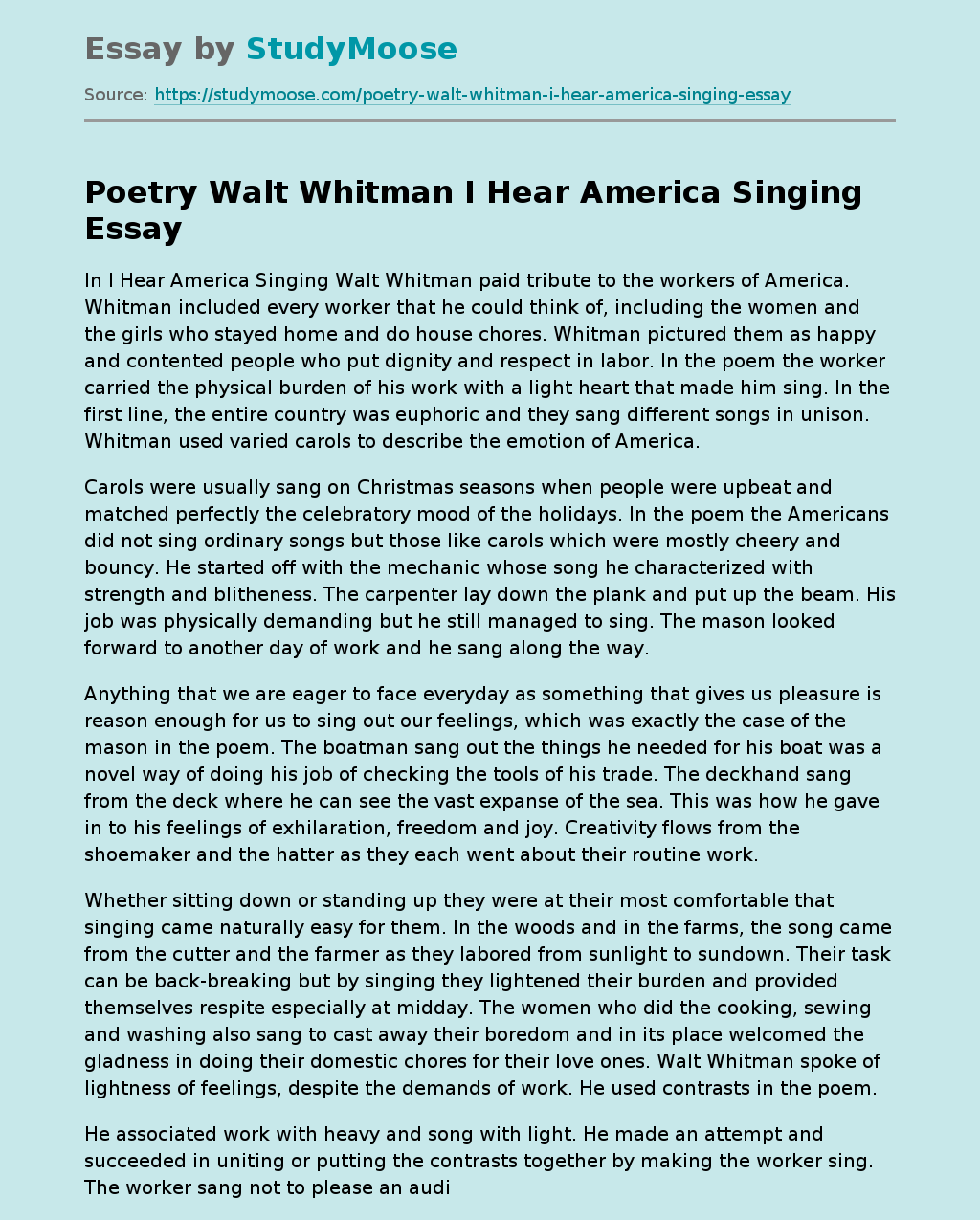