Whenever you walk on the beach do you notice the plastic in the water or on the sand? Do you ever think that something should be done about this? Plastic pollution is something that’s hurting the environment and is growing more and more every year. Plastic pollution is caused by people using the ocean as a trash can. People are careless and would rather litter than throw the pastic bag away or recycle it. Convinenece to people is better for them than the environment.

Don't use plagiarized sources. Get your custom essay on
“ Plastic Pollution: a Serious Problem ”
Get custom paper
NEW! smart matching with writer

Throughout the years the pollution has gotten worse. In the last few years like in 2008, global plastic consumptin has been estimated at 260 million tons. It is estimated that in the year 2015, 297.5 million tons of plastic debris will be in the water. Last year 150, 000 tons of marine plastic debris ended up on the shores of japan and 300 tons a day on indias coasts. What we have to accept is that plastic never goes away and harms the environment very badly.

Think about the things used in peoples daily lives like grocery bags, drinking bottles, and straws. Virtually every human being on this planet uses plastic materials directly and indirectly every single day. Plastic pollution kills, pollutes the water, and is difficult to clean up.

It is evident that plastic pollution has become a serious problem .More and more people are concerned about how to solve this problem .Using plastic is very normal in human’s life .People use plastic everyday like plastic bottle, plastic bag. After people use them, people throw them away, which is plastic pollution.

According to Wittenberg (2009), “today between 500 billion to one trillion are used annually. Over one billion plastic bags are distributed free to consumers each day. ” This essay will discuss the Ocean pollution problem, landfill problem and economical problem and then introduce how can individual, governments and school to solve the problems. Firstly, ocean pollution problem by plastic is becoming more and more serious. So much plastic is flowing into the sea, which pollutes the ocean. The UN Environment Programme (2006) estimated that “every square mile of ocean contains 46,000 pieces of floating plastic”. Besides, some marine animals mistake plastic as food.

It is harmful to them. Wittenberg (2009) state that because of plastic, more than one million marine animals and bird die. Many sea turtles mistake plastic as jellyfish. So plastic are lodged in their digestive tract, contributing to slow and painful death. This information indicates that how serious the plastic pollute the ocean and does harm to animals. If human eat the marine animals whose digestive tract contain plastic, the plastic will then be harmful to humane themselves. Secondly, landfill is another problem. The rubbish that humans throw away every day contains a lot of plastic. Because plastic has harmful chemicals, Humans need to bury them deeply. In addition, plastic need a long time to decompose. Wittenberg (2009) points out that plastic bag contain PCBs and DDEs chemicals. It takes 1000 years to decompose. So the land humans can use is becoming limited. According to Clean Up Australia Ltd (2009), “Australians dispose of an estimated 4 billion plastic bags, or 20,700 tons of plastic, that can be recycled.

Plastic pollution kills marine life. Marine animals such as seabirds, whales, and sea turtles are effected. An animal in the ocean just wants to survive. Plastic stops animals from surviving in various ways. Much of which inevitably finds its way into marine ecosystems as microscopic particles. The water gets dirty and its hard for the animals to breathe. A seaturtle can mistake a plastic bag for a jellyfish and that leads to blockade in the gut and leads to an internal death. The plastic also makes them buoyant, and unable to dive for food. Fish in the North Pacific injest 12,000 to 24,000 tons of plastic every year. When seabirds injest plastic it reduces the storage volume of the stomach and makes them eat less. So the seabirds usually die from starvation. Zooplantion is a type of plankton consumed by marine animals and the zooplankton is starting to contain toxins from the plastic. Since zooplankton is at the bottom of the food chain the animal that eats the zooplankton is eaten by another animal, the toxins can be spread easily.It can cause death to humans as well.

The chemicals are toxicand leave long term effects. Long term effects including endocrine disruption and cancer-causing mutations. Plastic pollution pollutes up oceans and water ways. The floating islands of plastic are called “garbage patches”. The pollution is getting so bad that the drinkng water gets more and more contaminated. It affects plants and living organisms so that does include humans . That is the reason why disease spreads because the water is not clean enough. The chemicals of plastic dissolves into the water. That is why when you go into the ocean it’s really dirty and blastic bags are everywhere. This type of pollution also has a huge cost for taxpayers and local governments because they have to clean trash off the beaches to protect public health. They also don’t want to lose tourism.Te plastic pollution has a big impact on how the water is and how it affects living organisms.

Even plastic bags that are reused as bin bags end up in municipal waste streams and will never be recycled, filling our already limited landfill space. From the evidence, plastic not only occupy the land but also pollute the land, which is detrimental to society. The final problem is that plastic pollution result in an economical problem. Every year, government spends a lot of money to produce and dispose plastic. It becomes an economic burden to government. Clean Up Australia Ltd (2009) indicates that governments, businesses and community groups spent more than $4,000,000 in cleaning up plastic shopping bag. Wittenberg (2009) observes that shopping bags cost retailers $4 billion in the USA. Besides, plastic are made with petroleum, which is a no renewable natural resource. It also leads to short supply of petroleum.

According to the Nolan ITU (2002), 8.7 plastic of petroleum energy can make car drive 1 kilometer. This information shows that plastic are not only cheap but also consume the no renewable resource. It is harmful to human’s sustainable development. In order to solve those problems, there are many things that human can do. As for citizen, they can reduce the plastic. If they can do it, the less plastic will be producted. But it is hard to do because plastics are linked to our life. The better way is to recycle the plastic. According toTechnoKids Inc. (n.d), “less than 10% plastics produced are recycled.” It means that recycling is no enough. If human can improve it better, the better human can solve the problem. Another way citizen can do is using green bag when they go shopping, which can reduce dependence on plastic bag.

Plastic pollution is difficult to clean up and costs a lot ogf money. It is difficult to clean up because it takes dedicated people to clean up the beaches. Stormwater runoff and overwatering flushed them through storn drains or directly to creeks, streams, and rivers that lead to the ocean. People are careless and small groups of people come together to try to clean the beaches. Even though they clean the beaches the cycle still goes on of plastic ending up on the beach and having to keep cleaning it. The most effective way to stop plastic pollution is to make sure it never gets there in the first place. If people just get more informed about how bad it is then they would get involved. People just have to recycle more and litter less, then there would be a big change. There are organizations that come together to stop the pollution. People can cut plastic items out of their routine and start taking responsibility Plastic pollution is really harmful to the environment. Killing innocent marine animals is not right. Polluting water is bad for living orgnaisms because organisms need water to survive. Plastic is really difficult to clean up; however it is not impossible. People just have to get informed over this topic and then changes will occur. Then it will be less likely to get toxins in the water. More marine animals will live and the water can get clean. Just recycling something little can make a big change. It takes something to change to make a big change.

As for government, government can formulate some policies to make plastic bag in charge in supermarket and institutes green chemistry plastic. Wittenberg (2009) claim that Ireland has devised a ‘Plas Tax’, which reduces 90% use of plastic bag. And Taiwanese formulate law to charge plastic bag and utensils. “Plastic product use has dropped by 69%.” From the information, the effect of government is obvious and both of them are good ways to solve the plastic problem. In conclusion, although the plastic problem is very serious, which is not only harmful to human and animals but also cause an economic burden. There are still some valid ways to solve it. If everyone can do their part, the plastic problem may will be solved one day.

2. The UN Environment Programme (2006). The world’s rubbish dump: a tip that stretches from Hawaii to Japan. Retrieved:11/11/2012 From:http://www.independent.co.uk/environment/green-living/the-worlds-rubbish-dump-a-tip-that-stretches-from-hawaii-to-japan-778016.html 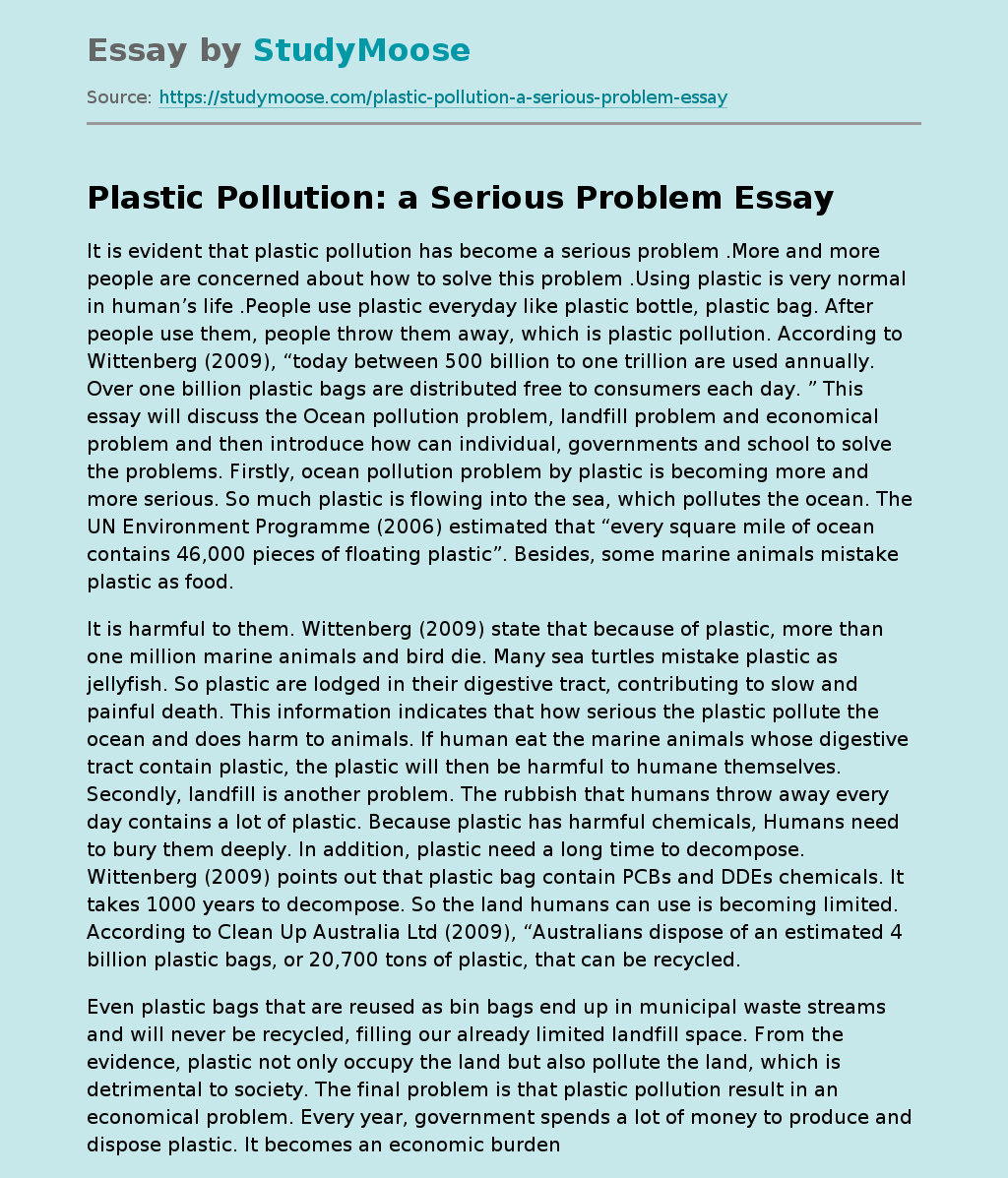