In lab we received a fetal pig for dissection to be done over five lab sessions. We started off with an over view of the pigs anatomy noticing the snout, external nares, eye structure, pinnae, tongue, teeth, tail, three clove hands, and feet. We also identitified the sex of our fetal pig, and upon observation at the base of the umbilical cord we determined the sex was a male. The first part of our dissection involved reviewing the masseter muscle structure.

We use a scalpel and started our cut at the base of the ear cutting until we reach the mouth.

Then we went back to base of the ear cut up by the earlobe traveling the scalpel right below the eye to the mouth again giving the cut a triangular type cut. Once we pill off the layer of skin we located the masseter muscle plucking, and pilling at the structure for closer view. We also located and viewed the facial nerve which was a thin pale band like structure.

Lastly with the use of a probe we pulled down and bend at the triangular cut site below the ear, and cut down slightly with the scalpel. We then used the probe to dig until we were able to expose the sub maxillary gland which was a tiny ball like structure. This concluded our dissection for the evening. Wednesday 10/24/2012

Today on our agenda was to observe the mouth structure of our fetal pig.We used scissor’s to cut the sides of the mouth cutting through the muscles, and the joint of the lower jaw so that the bottom jaw could be opened wider for a good view.

Once we opened the mouth wide we were able to identify the soft palate, hard palate, nasopharynx, epiglottis, glottis, and the opening to the esophagus.

Our second body region dissection of the night involved the neck, and thoracic site we first had totie the legs, and arms of our pig to the dissection pan to place it in a supine position with the use of rubber bands.With the use of the scalpel we begin cutting along the midline of the ventral surface of the pig from 1 1/2 cm from the hairs on the chinny, chin, chin Cutting down, and into part of the sternum. We then carefully, peel the skin away from the incision in the neck region using a probe. We used the probe to peel away muscle tissue until the thymus gland on each side of the trachea was exposed. We Use a probe to separate the two lobes of the thymus gland and to further separate the tissue over the trachea. The trachea, thyroid cartilage,thyroid gland, esophagus located dorsal to thetrachea, lymph node very difficult view, common carotid artery, internal, and external jugular veins which were located bilaterally to trachea sites wereviewed. This concluded our dissection plan for the night. Wednesday 31, 2012

Today we continued our dissection with the use of a scalpel and scissors by cutting midline from thoracic until we reached the diaphragm. We followed the probe with a scapula and cut through the thick sternum. We scraped the walls superficially to separate the internal organs from the durable parietal pleura and pericardium. Next, we used our fingers as a guide to cut through the ribs. We did not pass the domed shaped muscle called the diaphragm. Another cut was made interiorly on bilateral sides of the diaphragm without passing this site using a probe to make a cavity on both sides of the abdomen. The diaphragm muscle was located meeting resistance on both sides at the bass of the abdomen where diaphragm separates the lower body region.

These two cuts allowed us to spread open the abdominal cavity. We observe how the diaphragm attaches to the body wall, and separates the abdominal cavity from the lungs, and heart. The thymus gland –thoracic portions, and ducts were viewed, and the heart and lungs were viewed. We had the male pig so after review of the professor’s dissection we were to remove one lung of our fetal pig which it was slightly damaged upon dissection. We cut with the use of scissors detaching our left lung of our pig. The students who had the female fetal pig were to dissect the heart which we then viewed the hearts region the superior vena cava, inferior vena cava, aorta, pulmonary truck, brachiocephalic vein, subclavian vein, brachiocephalic artery, and the subclavian artery was observed.

The next part of our dissection we pinched the belly of the pig and cut a portion of skin inferior to the diaphragm creating a window to expose all the superficial organs of the abdomen. We inserted the scissors through the body wall on one side of the umbilical cord and cut anteriorly to the base of the legs. We Continue cutting from the anterior end of this cut so that we made a flap like structure around, and on both sides of the umbilical cord. The cut was anterior to the navel and along each side of the navel. The flap of body wall that contains the navel was unfolded to reveal the internal organs of the abdomen. We clipped the umbilical vein and place part of it between the liver to detach the site to make the open flap to view the internal abdominal organs. We concluded our dissection for the evening to be continued next week. Wednesday 7, 2012

Today we continued with our view of the abdominal organs identifying the organs of such as the liver is large organ noticed right below the diaphragm. We Lift the right lobe of the fetal pig and identified the gallbladder. The pancreas was located which is posterior to the stomach were viewed. The stomach was assessed which we were able to locate the pyloric sphincter with the use of a probe which we inserted near the stomach to view the sphincter which then leads into the duodenum. We then Lift the stomach, and identify this light-colored organ which was the spleen. The small intestines, descending colon, mesenteries, spiral colon, ileocecal junction, and cecum were observed. The cecum was located which is a pouch like structure at the end of the descending colon. All these organs were easily assessed, and viewed in amazement. November 14, 2012

Once we removed one kidney we sliced the kidney in the medial side into two half’s to open, and observed the internal structures we located the ureters which travel from the kidney down to the urinary bladder where they are joining together with the urethra. At the end of the urethra we reviewed the seminal vesicles, and we then located the renal artery, and vein which comes from the kidney traveling to bilateral sides of the urinary bladder. The common iliac artery was viewed as well, so after careful review of these structures we then observed the reproductive organs. We begin with the use of scissor to cut interiorly through the pelvic area a little off center of one side of the groin which we viewed the inguinal canal to avoid cutting the penis on our male pig. Once we made a cut we pulled the hind legs apart.

We then continue the cut through with the use of a scalpel to cut through the cartilage removing excess tissue until we were able to expose the bulbourethral gland. We also located the urogenital opening just below the urinary bladder we then noticed a long thin structure that travels from below the urogenital. We then cut the tissue that protects the penis cut down as far as we could go to expose the entire structures of the penis. We then searched on both sides of the pelvic area until we located the testes we then removed the scrotal sac exposing the testes. After careful removal of the tested we observed the epididymis located anteriorly to the testes which also attached a tube like structure that travels from the epididymis to the bladder called the vas deferens.

A difficult structure call the gubernaculums was attempted, but unsuccessfully viewed. The groups with the female fetal pig were to expose the urogenital opening which lies above the anus as well as the genital papilla nearby were viewed. The body of the uterus and the uterine horns is located behind the urinary bladder, and the ovaries were located on bilateral sides of the pelvic which lye below the kidneys. The vagina, and the vaginal vestibule, lye just behind the urethra were viewed. Once the groups with the female pig were finished we all switched to review each other’s pig organs to observed the differences among male, and female reproductive organs, so this concluded our last lab dissection for the semester. 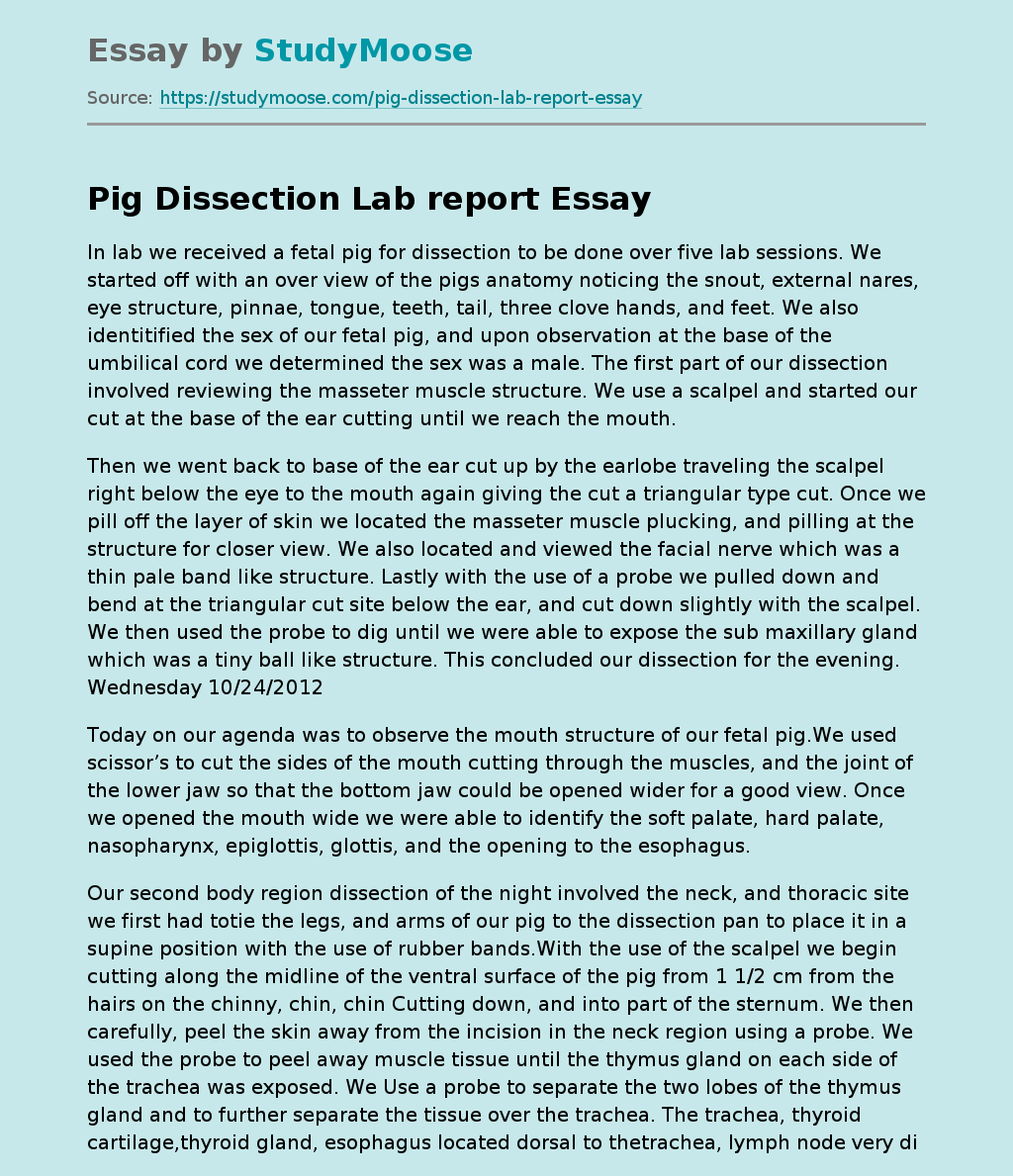