Hedonism as a philosophy defines “the good” in terms of pleasure and pain, and is the worldview that holds to the doctrine that pleasure is the greatest good. Now, who wouldn’t define pleasure as good? Aren’t we all by this definition Hedonists? Here is where those three little letters, “i-s-m” make their impact. As we have learned, the suffix “-ism” transforms a word into a title for an entire life and world view. Hedonism indicates a system of thought, a lense through which to view the universe in which the “summum bonum”, the “highest good” of man and the ultimate purpose of his being is found in the enjoyment of pleasure and the avoidance of pain.

Don't use plagiarized sources. Get your custom essay on
“ Philosophical Concept of Hedonism ”
Get custom paper
NEW! smart matching with writer

So what is sought for under this system, constantly and continuously is the increase of pleasure and the decrease of pain. The roots of Hedonism can be traced back to the fifth century BC to the ancient Greek school of the Cyrenaics. The Cyrenaics were named after their native city of Cyrene in North Africa.

Their focus on the pleasure of the moment as the supreme good reflected a general skepticism: Only immediate sensations can be known. Concern with the past or the future causes uncertainty and anxiety, and should therefore be avoided. Gross excess and reckless abandon in sexuality and the use of alcohol are associated with this particular philosophical principal. Greek religious devotion to the god Dionysius and later Roman celebrations of the Bacchanalia, orgiastic festivals honoring Bacchus, the god of wine are similar manifestations of a Cyrenaic-style Hedonism.

In these cases, the celebrant sought liberation from every-day inhibitions and a mystical experience of ecstasy, aided at times by temple prostitutes. The Epicurean school of hedonistic philosophy might be looked on as the next stage of Hedonism. Named after its founder, Epicurus, and started around 306 BC, Epicureanism was a more moderate variety of the seeking of pleasure, recognizing the problem of:

If you don’t achieve what is sought, you lose by frustration, if you do achieve what is sought, you lose by boredom. Either way, pleasure is not consistently attained. Therefore Epicureans sought not necessarily the “maximum” pleasure, but instead the “optimum” pleasure, all things considered. Too much wine leads to a hangover, not euphoria. So the balanced enjoyment of pleasure was the means by which Epicureans sought to achieve philosophical ataraxia, or peace of mind. The term “epicurean” is even in use today as denoting a person of exquisite tastes and gourmet palate, enjoying the finer things in life in a refined and sophisticated manner. Hedonism capitalizes on the natural attraction to pleasure and aversion to pain with which we, as feeling creatures, are naturally endowed. Turning the pursuit of pleasure into an ultimate standpoint of value, the hedonist determines the very meaning of “goodness” in terms of pain and pleasure.

Modern forms of Hedonism can be clearly seen, along with their consequences in our social environment. The modern pursuit of happiness, redefined as the pursuit of euphoria, has resulted in extreme expressions of escapism such as drug abuse and alcoholism affecting even the youngest members of society. “Happiness” has been translated almost exclusively into the category of “feelings”. The function of the word “feelings” in contemporary culture has undergone a radical change. The concept is so pervasive that standard traditional forms of language, categorical propositions and prefatory statements about theoretical thought have changed to accommodate this word. How often have you heard someone state the following?: “I feel that you are mistaken”, or, “I feel that (this or that) is wrong.” What is actually being talked about here is not a feeling, it’s a cognitive process, it’s thinking.

That is not to say that feelings are unimportant; feelings are a vital part of what it means to be human. For the work of the physician, counselor or the psychologist feelings are a totally appropriate category to investigate. In inter-personal relationships you’d better be dealing with the issues of feelings or chances are you’re not communicating very well. Feeling, however is not the same thing as thinking. The concept has so permeated our culture that people are talking about feeling ideas and feeling thoughts. Largely due to “pop psychology” we have become obsessed with the analysis of our moods, which is a focus on our feelings. How has this impacted our lives? If you are a thinking person you already know the answer to that question. Assuming you’ve been awake at some point during the last thirty years, you already know about the “drug culture”; you live in it. You’ve heard the statistics on teenage alcoholism.

You’ve seen the “sexual revolution”, and its results. The accepted definition of the word “promiscuity” prior to the 1960’s was :”Sexual involvement with more than one person outside the bonds of marriage”. The “liberated” Helen Gurley Brown gave us a new definition: “Having sexual relations with more than one person in the same day.” Are you aware that the divorce rate in the United States is estimated at fifty percent? It is when we buy into the doctrine that life is to be lived to escape pain, including responsibility for anything uncomfortable that we begin to feel the impact of a philosophy of radical Hedonism.

By saying the avoidance of pain and the pursuit of pleasure is “the good” (not just ‘good’, but “The Good”), Hedonism is making a value judgement, which in the hierarchical structure of philosophy produces a system of ethics, which in turn produces behavior patterns of morality. These are the cultural, ethical and philosophical reasons for the changes we have seen in society. As in all forms of philosophy based in secularism, Hedonism removes the Transcendent, destroys any Ultimate basis for Truth and Goodness, and leaves us with “feelings”, preferences, and a totally subjective basis for ethics and morality. 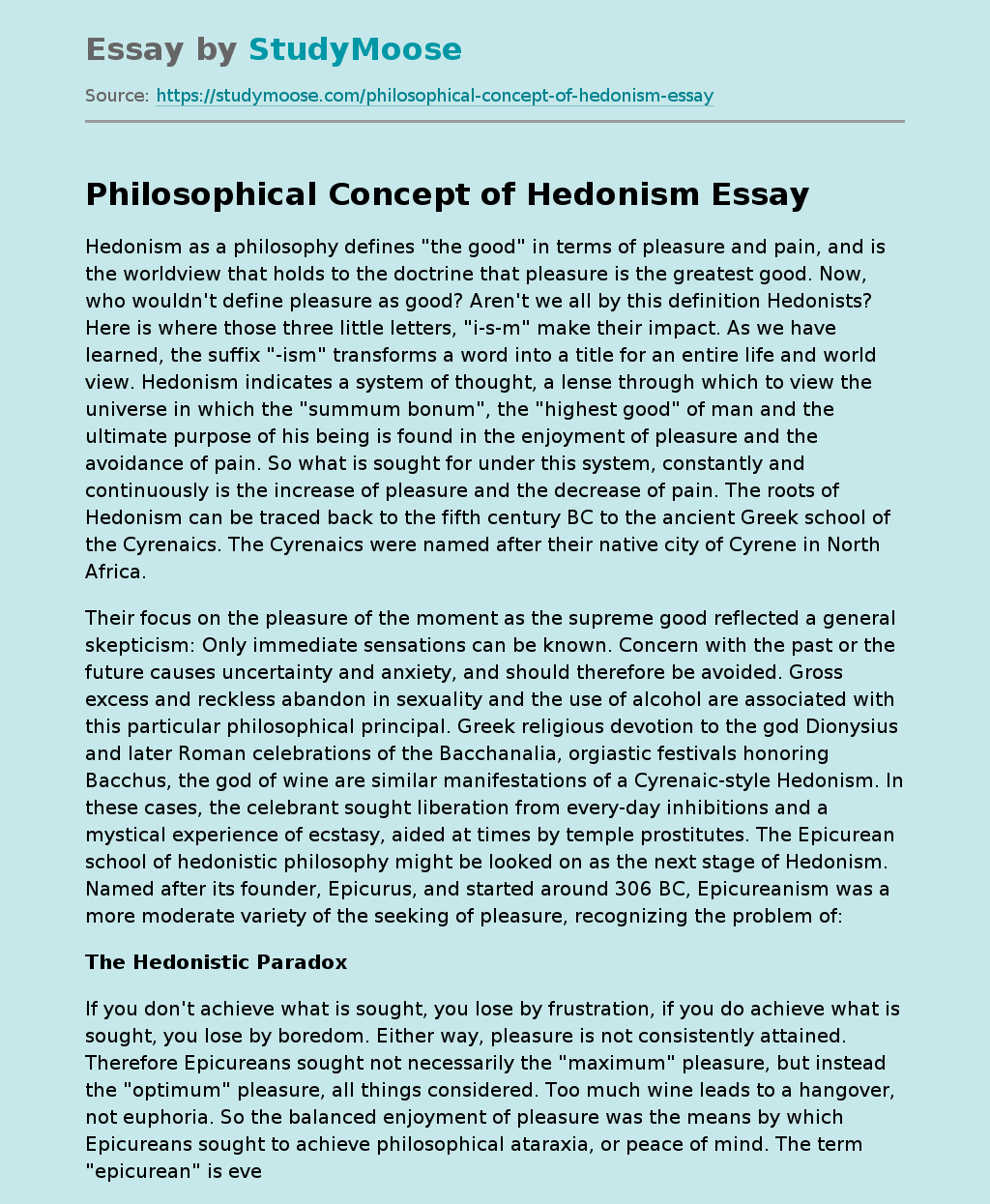