FORCED LABOR is established under the Spaniards government. It is where the male Filipinos 16-60 of age were required to work for the government for 40 days in one year.

They were assigned to build or repair roads and bridges
Sometimes, they would be assigned to work on a shipyards or foundries or to cut timber in the forest.

Don't use plagiarized sources.
Get Your Custom Essay on Philippine history Just from $13,9/Page

They were also used as soldiers or sailors.

The law required that the worker should be given a nominal salary and to have a free rice rations, but then the officials of the Spaniards government were corrupt and ignored the law.

They pocketed the salaries and the rice rations were distributed to them.

Another burden imposed on Filipinos was the BANDALA.

It is a compulsory sale by the Filipino farmers of their farm products to the Spaniards. This system was being abused also by the Spaniards, their goods were undervalued and in many cases their products were not even paid for.

The Spaniards introduced Western or European system of education wherein the principal aim of the education in the Philippines during Spanish regime was to make the Filipinos obedient to them and to be a god fearing Christians.

Spaniards established many other systems which are only for their own good. The Filipinos became slaves for a long time. They abused the Filipinos. They were also being maltreated by the Spaniards. Others are being killed. By the help of our great men and some Americans, the Philippines became free from the hands of the Spanish. And this is the end of the Spanish regime.

The Americans built schools in the City.

Because the Filipinos were hungry for education, they flocked to public and private schools in large numbers.

It provided for free primary education and the establishment of a school to train Filipino teachers.

They gave the bright young Filipino students an opportunity to take up higher education in American universities and colleges.

They introduced Protestantism (It did not gain wide acceptance maybe because Filipinos were deeply believed in Catholicism).

The economic development of the Philippines progressed.

Philippine history. (2016, May 25). Retrieved from https://studymoose.com/philippine-history-essay 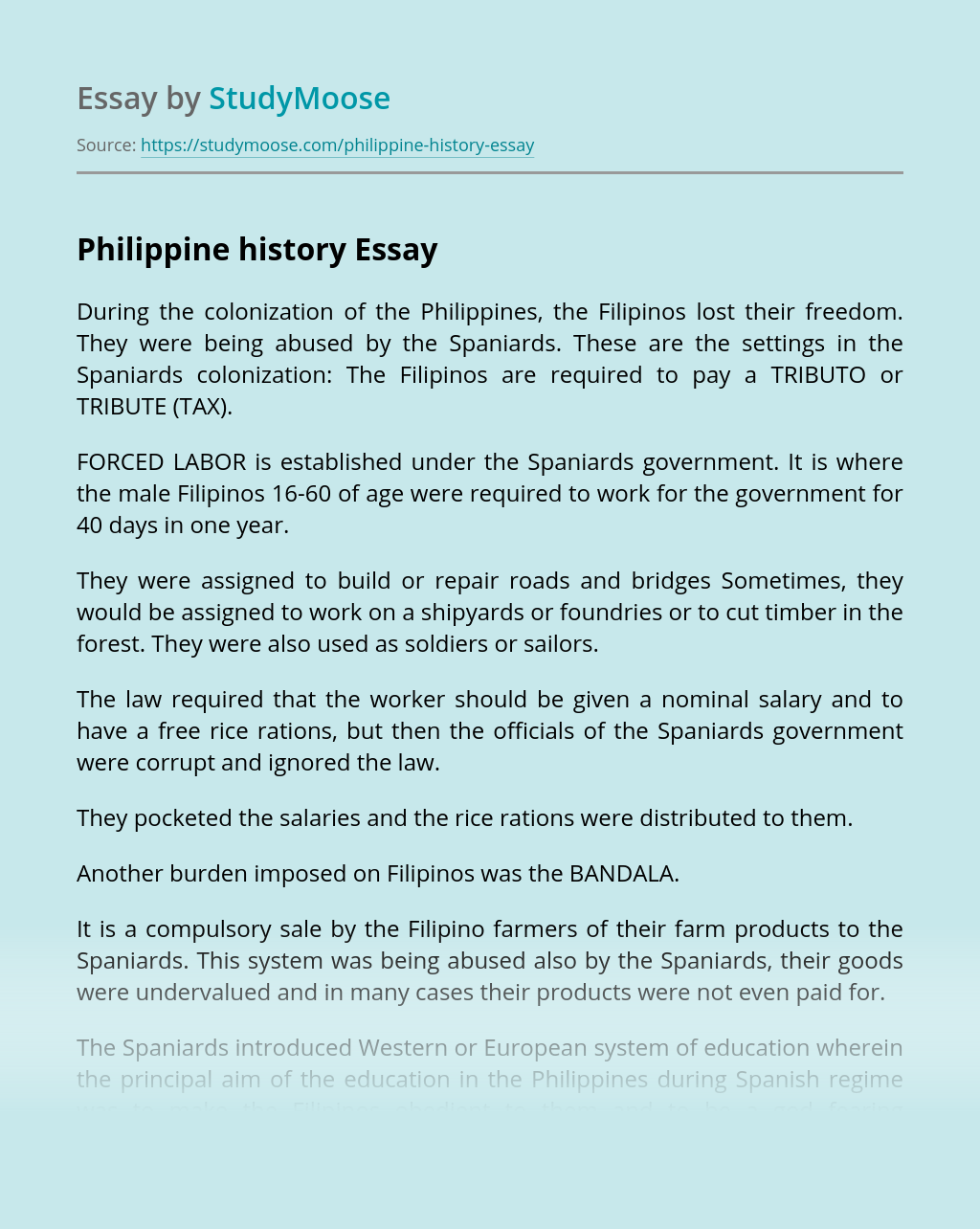 Rate this post We want stronger relationships with their teachers, with each other and with their communities locally, provincially, nationally and globally We want teachers to know how we learn, to take into account what we understand and what we misunderstand and use this knowledge as a starting place to guide our continued learning. We...

Rate this post My work history starts as a mother of two delightful teenagers. I have enjoyed spending time with my kids since they were babies and watching them grow into hard working, wonderful people. In recent years I helped create an exercise movement class for preschool aged children. In this job experience I created...

Learning and Being Educated

Rate this post Education has become an important part of everyday life as means to teach knowledge and get students for their life after school out in the “Real world”. And yet, a question that has brought a ton of controversy is “what does it mean to be Educated and who decides”. Is it right...

Rate this post In Everythingthere is a beginning and a time for every purpose under the heaven SJAV was founded at the right time and place with heavenly purpose. Sometime in a year of our Lord in nineteen hundred eighty six, a hardworking businessman met a very tragic experience that almost cost his life; without...

Rate this post Education is one of most important thing which considered as a most basic requirement after three basic human needs; air, water, and food.. and because of that nowadays mostly in usa most people are educated. But a retired New york teacher who is awarded with “Best teacher of the year (1989-1991) Ghatto...

Rate this post Education Policy in Two Different Countries Introduction             These refers to the principles and policies made by the government in the field of education, collection of rules and laws that govern the operations carried out in the education system. Education is a form of learning where knowledge, habits and skills of a...

Rate this post Teachers, as we all know some are strict, some are lenient, and some are funny. Every teacher wants to be a good teacher. An ideal teacher is the one who is loved and respected by every student. A student will remember such a teacher long. How can a teacher become an ideal...