Get the order from Bob Franklin. In order to get the order, Peter has to face the problem of “freight cost”. Secondary contradiction for Peter Green:
1) His supervisor, John Murphy makes no bones about his scorn for the new breed of salespeople at Scott Carpet, such as Peter himself. 2) Tiff with John Murphy.

How to deal with the principal contradiction for Peter Green As Peter Green has to face his ethical principle of no lies, he cannot bear from lying to the front office or he will encounter a faith breaking.

That leaves only choice is to satisfy Bob Franklin in order to not lose the commission, at the same time, not breaking his ethical rules. There is one way to finish the task and benefit both sides. Peter could ask the company to bring forward a preferential strategy that all the firms that have a long-term partnership with Scott Carpets (Such as Peabody Rug) will be given a certain credit according to the size of the order.

In that kind of strategy, Peter will not need to face the dilemma and Bob get what he wants. It’s a win-win situation, job done. Conspiracy? Let’s say it’s an overt one. Whatever happened in system, stayed in system, and solve in system.

How to deal with the secondary contradiction for Peter Green First thing, be nice to John Murphy, whatever it’s from the bottom of the heart or act according to circumstance. Show some respect to the supervisors.

Secondly, do everything nicely, keep follow the ethic rules but learn to be adaptable. Last but not least, play the overt one, not conspiracy.

What if the company doesn’t agree with the new strategy?
As to the character of John Murphy, it’s easy to tell his arrogance. By that case, Peter’s new idea may face a very dangerous situation. As the rule “Whatever happened in system, stayed in system, and solved in system”, Peter cannot bypass the immediate leader (John Murphy) to do the report. By that case, he has to endure hardships (agree with his BOSS John Murphy and show the loyalty to him) to wait the promotion comes. When he gets promoted to, let’s say, District Manager, he can change the rules and play his game. 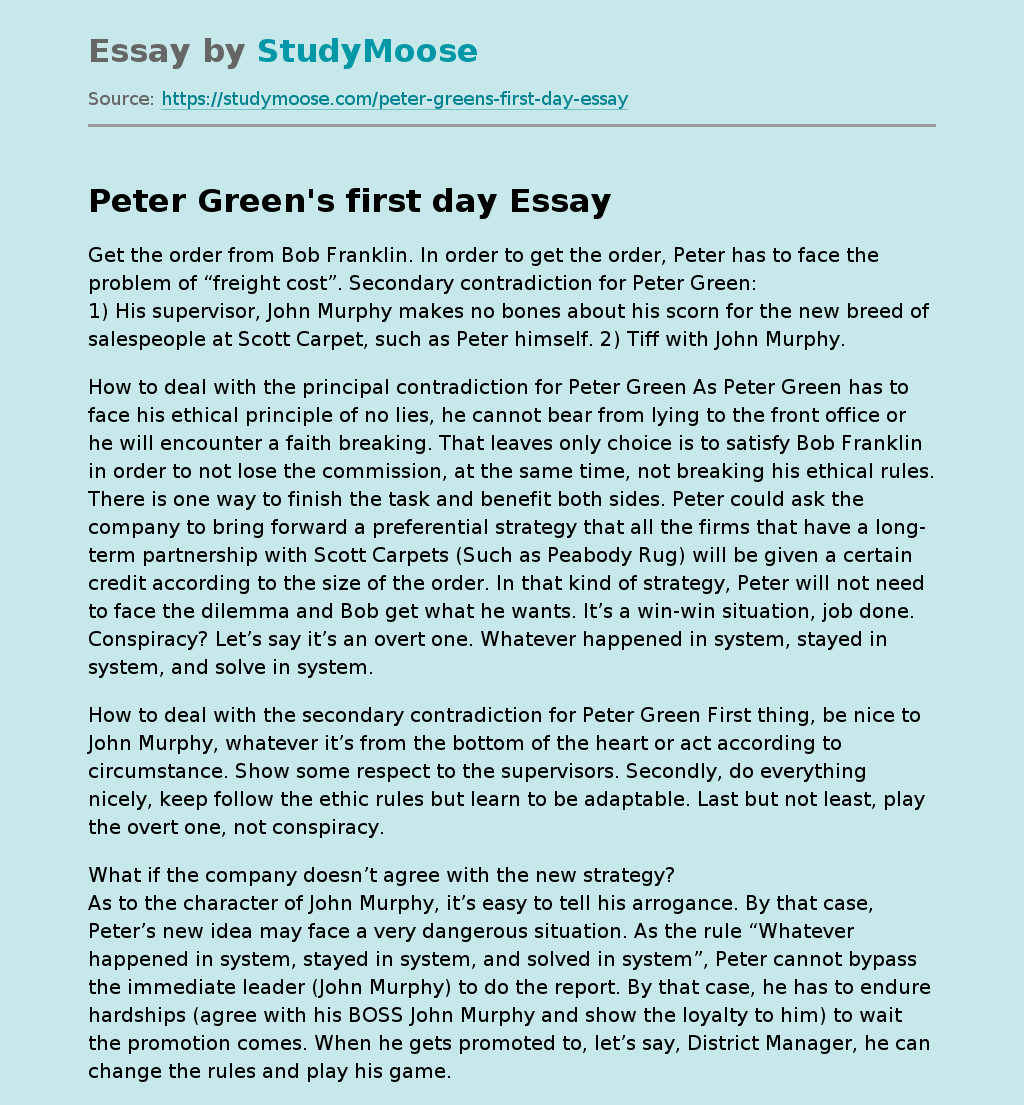