In the stories, Crackling Day (written by Peter Abraham) and The Trout (written by Sei?? n O’Faoli?? in), are in there own way similar. They are both 20th Century stories. They both make you feel sympathy for the children. They were joyful at the beginning of the stories they are in, but cruelty be found them through the middle of the story, and tortured them. The Trout is an Irish short story, about a girl called Julia who finds a trout stuck in a well and desires for the trapped trout to be free.

Don't use plagiarized sources. Get your custom essay on
“ Crackling Day by Peter Abraham ”
Get custom paper
NEW! smart matching with writer

Crackling day is possible a South African short story, about a Black boy (from hereon I’ll call him Dale) who lives with his Uncle Sam and Aunt Liza in on a plantation owned by a racist White man (Bass), whose son picks on the Black boy and gets him in trouble. The similarities between the two stories, is that they are both 20th century short stories, both about their childhood and how they realise the way the world works.

There is a part of The Trout when Julia little brother wonders how the trout got to be in the well, and her mum makes something up along the lines of

“So one day Daddy Trout And Mammy Trout…. ‘ When he retailed to her she said ‘pooh'” This shows that she no longer believes in made up stories such as that. There is also another point in Crackling Day where the Dale realises about ‘Whites and Blacks being different, and how Blacks are forced to serve Whites, as they are not equal’.

There are many differences between the two such as the obvious that ones a girl and ones a boy, they belong to different nationalities. Ones about a trout and the others about racism.

Julia in The Trout has, near enough, a lot of freedom, but Dale in Crackling Day has just about no freedom due to him being Black. Julia lives with her parents and is situated at a holiday camp called ‘G’, whereas Dale lives with his Uncle and Aunt on a plantation, because his parents are dead. Julia has had a healthy, fairly wealthy life, but Dale has a really poor, uneasy life. In the Trout, Julia is looking out for the trout, and in Crackling Day, Dale looks out for himself. The girl has a name, but the boy doesn’t. In The Trout, Julia doesn’t get treated bad, but in Crackling day, Dale has a tough life.

The style of the language shows that The Trout is aimed more at a younger audience, but with the language content of Crackling Day, it is aimed at an older audience. There is quite a lot of racial language from Crackling Day. Here is an example of it, ” ‘Hey, klipkop! ‘ ‘Don’t look back,’ Andries said. ‘Hottentot’s! ‘ We walked as fast as we could. ‘Bloody kaffir! ‘ Ahead was a bend in the road. Behind the bend were bushes. Once there, we could run without them knowing it till it was too late. ‘Faster,’ Andries said. They began pelting us with stones.

‘Run when we get to the bushes,’ Andries said. The bend and the bushes were near. We would be there soon. A clear young voice carried to us: ‘Your fathers are dirty Black bastards of baboons! ‘ ‘ Run! ‘ Andries called. ” This shows the history of racial abuse. This type of violence was the way blacks were treated during the horrifying slave times. This illustrates the way blacks were perceived by whites, even though the blacks had to many things for whites. In The Trout, there is no harsh language, nor strong language, and very little intimidation.

As you can see, both, The Trout and Crackling Day were (in their own unique way) different, but similar. In my point of view, I thought The Trout was a boring story because it was about a girl who finds a trout, trapped in a well, and decides to help free it. Whereas, in Crackling Day, I thought that the story was sad, because the kid – Dale – had to discover the world by having to go through his childhood, in a racist society, and having no choice, but to put up with it, otherwise, he would be beaten. I know that in the two stories, there is a difference. 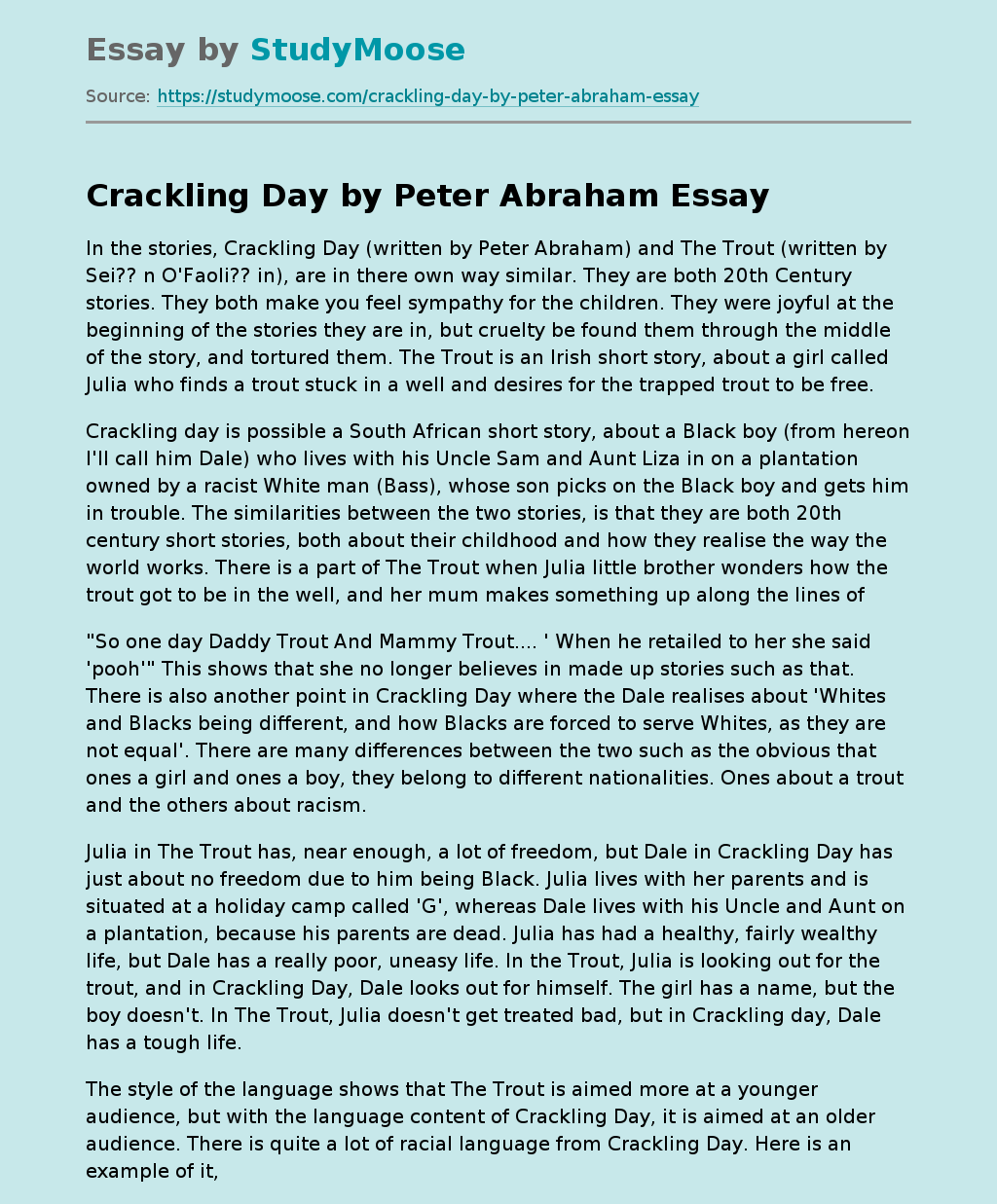