Vitality Health Enterprises is a large beauty products and nutraceuticals company offering a full range of health, wellness, and beauty products around the globe. The company was originally founded in 1987 in Ames, Iowa, by Hikaaru “Fred” Kikuchi who is an experienced serial entrepreneur. His inspiration for Vitality came when his wife was continually dissatisfied with the quality of beauty products she was finding here in the U.S., since they emigrated from Japan.

Kikuchi saw a business opportunity and used his relationships from back home to import beauty products and the rest is history.

Don't use plagiarized sources.
Get Your Custom Essay on Performance Management at Vitality Health Enterprises, Inc. Just from $13,9/Page

Vitality has gone through numerations of growth that has included: moving company headquarters to Des Moines – thought to be a better location for growth, establishing its own manufacturing facility with its own chemists – to develop its own unique products specifically targeting the U.S. marketplace, purchasing HerbaPure Nutraceuticals to offer a broader range of products, and establishing an IPO to raise capital for further expansion – which now includes nine global offices representing markets in Asia, Southeast Asia, and Europe.

Vitality has grown far beyond selling products out of Kikucki’s garage to a large scale enterprise in the personal care products sector. Beth Williams is the current CEO who was recruited in mid-2008 to replace Kikuchi over concerns for his health, and to infuse Vitality with fresh blood and new ideas in the highly competitive marketplace. The board liked her no-nonsense approach and hoped she could turn Vitality around after a period of stagnation. James Hoffman is the newly

appointed vice president of Human Resources at Vitality Health Enterprises and shares concerns with Beth that Vitality is not maintaining its edge on innovation, and has a large employee turnover rate among the highly talented research scientists. His first assignment is to take the lead on the new Performance Management Evaluation Team, constructed to evaluate the success of the system, and present the findings and recommendations to the board. Hoffman’s evaluation can either provide him with a great career opportunity, or be the catalyst for his departure. His concern is they do not have all the data to present and having been with Vitality for two months, he needs to be certain of his analysis – not to mention his boss, Beth, is the one who implemented the program several years earlier.

The main problem in this entire case is how Vitality can maintain being the industry leader in innovation. There is a high turnover rate with high performing employees, especially those who are the innovators in product development. The high turnover is attributed to the poor incentive structure. Innovation is vital at maintaining the competitive edge, in any rapidly changing industry.

For other employees, the structure encourages complacency and a culture of ineffective performance, not easily identifying poor performers. There is a problem with the evaluation process required of the managers, in the performance evaluations. They are not properly trained on how to evaluate the teams and don’t like the structure because it alienates team members. There might also be legal issues with discrimination and how the evaluation is designed.

Company wide motivation has been declining due to the performance management system. Managers don’t feel thorough evaluations are, “worth their time”, and they are concerned the force- rank system incorrectly ranks individual performance. Employees can be placed in the lower tier, comp structure, if they are part of a high performing team and the opposite can be true for employees ranked in the higher tier, if they are part of a lower performing team.

The system’s “fairness” has been questioned throughout the organization, and no clear standards are understood on what dictates your placement in the tier system. If employees are not clear on the system, it is challenging to make corrections in their performance. In addition, management feels employees are less likely to take additional initiative, outside their roles, to better the team’s performance – since there is no real incentive to do so. These issues negatively affect the culture, and have led to increased turnover in top-tier talent, which has left Vitality struggling to maintain its hold as industry leader.

Performance management systems primary goal should be to stimulate behaviors that improve performance within a company. It appears as Hoffman suggested – Vitality has, “missed the mark” and is not fostering the type of behavior it originally set out to accomplish. The question for Vitality and Hoffman is: does the performance management system need correction, or should they start from scratch? We believe they can modify the current system they have in place and make it successful. They have already taken the appropriate measures to find where the system is lacking, which is in motivating the employees. This demonstrates that Vitality is moving in the right direction by being proactive on improving the working environment and culture of the company.

One system will never be a perfect fit for all, but we believe we’ve identified a few key suggestions, based off the organizational feedback, that would enable Vitality to “hit the mark” with their performance management system. First we would address the time constraints the managers have in preparing the evaluations, by allowing the process to be extended by three months. Teamwork is central to turning out new products, yet the evaluation removes the motivation and encouragement for individual initiative that would benefit team performance. We recommend a piece of the individual performance, perhaps 20-30 % of the evaluation, be based off team accomplishments; similar to a NFL football team winning the Super Bowl and earning bonuses for the team.

It’s well known that some players contribute more than others due to ability, yet the entire team contributes and receives additional compensation based off the accomplishment. The force-rank component would be based off the employee achieving key individual milestones, that would be determined by the manager and employee, at the beginning of the year. We would also remove the required number of rankings for top achievers, achievers, low achievers, unacceptable and not rated. We would leave these up to the discretion of the manager. The manager would then have a pool of money to distribute throughout his team contingent on the performance evaluations. In order to entice innovation, within the organization, a specific bonus/kicker structure should be incorporated into the plan that rewards individuals and teams that bring new product development to market.

It’s clear that Vitality has made the right moves to maintain its market
leader perception. We applaud Beth Williams for identifying a problem within the company, and being proactive to change course in order to maintain continued high performance. 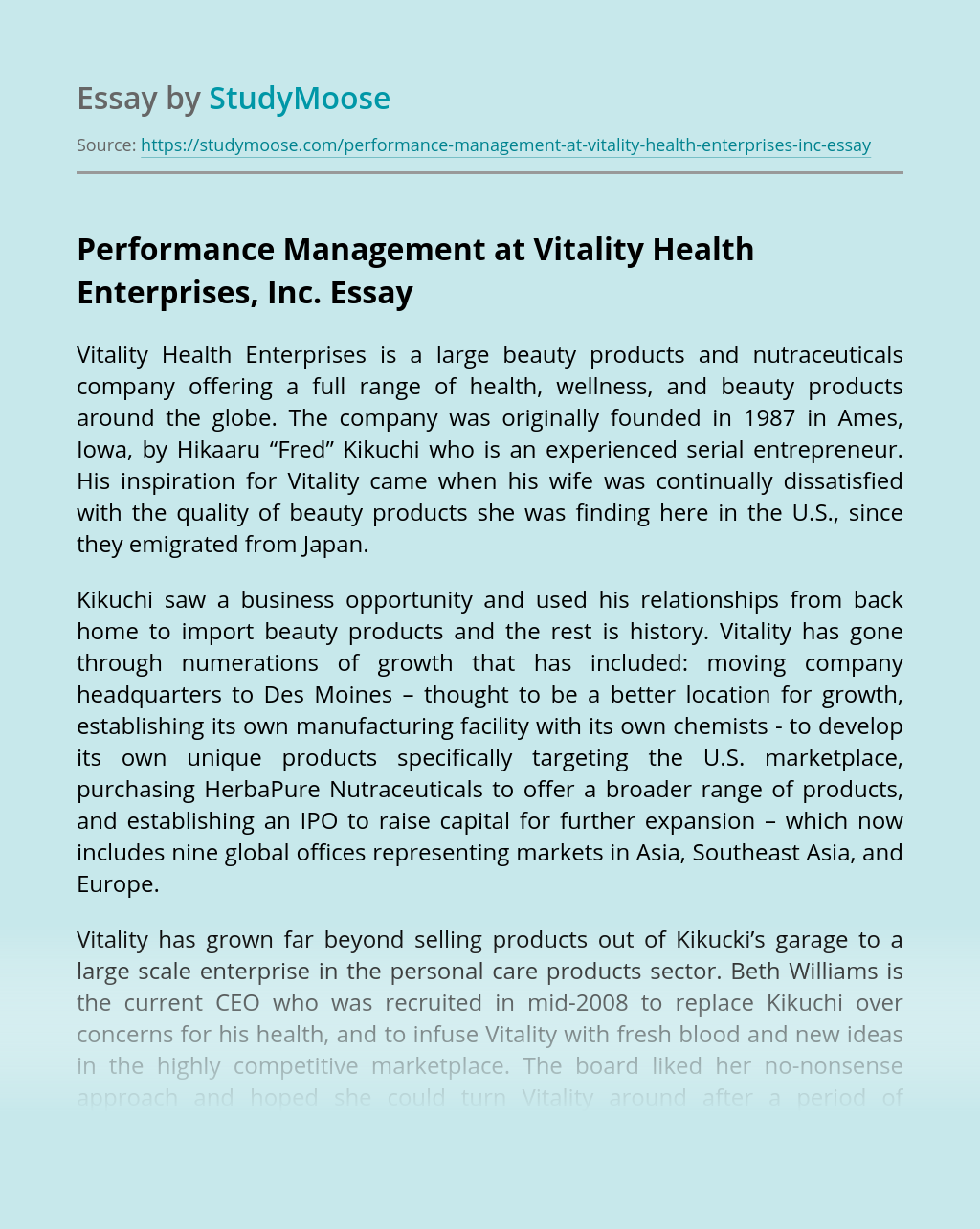