College sports. We all have our favorite teams, we all get excited when they win, and sad when they lose. Some of us would love to play for these teams by getting full-ride scholarships. But people will dedicate their lives to getting into these schools. What will happen once colleges will start paying athletes? School tuition would get higher because who is going to give the school money to pay these athletes. Or tickets to games and spirit gear prices will dramatically increase.

Don't use plagiarized sources. Get your custom essay on
“ Paying College Athletes Should Be Easy Decision ”
Get custom paper
NEW! smart matching with writer

The NCAA, the national collegiate athletic association, is the league all college sports play under. A recent debate involving the NCAA is should college athletes get paid. One side of the argument is they should because they don’t have the time to get an actual job to financially support themselves. This may be true but this is what they signed up for. They are dedicating their time to help themselves go into professional sports. College athletes should not get paid because it is unfair to other students who play less watched sports because a scholarship the athletes get is a form of payment.

The first reason college athletes should not get paid is that not all colleges have the money to pay their athletes. (Quote) “If you’re unaware, the NCAA released data showing that only 14 programs are turning a profit without having to rely on institutional support (like student fees or a check cut directly from the university coffers)”(end quote), Kristi Dosh (The Problems of Paying College Athletes, Forbes).

Some of the 14 programs that are financially able to pay their athletes are Notre Dame, OSU, LSU. There are over 1,000 North American institutions the NCAA supports. If only Fourteen colleges can pay their athletes it would be very unfair to the rest of the players. Another reason college athletes should not get paid is that they already get special advantages other students do not get. Maurice Reed Jones states (Quote) “The biggest reason why college athletes should not be paid is that having a scholarship is technically a form of payment.” (End Quote),( Why College Athletes Should Not be Paid, Odyssey).

Most college athletes go to school with some type of scholarship to cover some all of their college expenses. If you pay for a student’s education and on top of that you are paying them to play for you. Wouldn’t that make other students feel less than these athletes? If colleges start to pay their athletes it would start to become more of a business instead of a school. The NCAA would become a lot like the NFL or the NBA. PAying their athletes like it is their job, but it is, in fact, an extracurricular activity. As a result, college athletes should not get paid because most athletes have a scholarship paying for most to all of their college expenses and it would be unfair to other athletes. Some claim that college athletes should get paid because they are unable to get a job to financially support themselves. College athletes also have school to focus on too. They have to study for tests and practice for their games. It would be hard for them to balance school. (Quote)“Contrary to what all the opponents believe, being an athlete is a full-time job.

They are at school, and these are extracurricular activities. The opposition may also believe college athletes should get paid because it would make athletes more competitive and make them work harder for their money. (Quote) “The tiered payments offered to professional players only motivate them to work harder to maintain their rankings.” (End Quote), Dave Anderson, List Land. If players are being paid it would potentially encourage them to work harder. Or it would also make them lazier, they got what the wanted and now they do not have to do anything. Student-athletes would start skipping school because it would no longer be their top priority, which it should be. (Quote) “Some athletes don’t even deserve the education that they are being given. “ (end quote) Odyssey, Maurice Reed Jones. If a football player can get a full-ride scholarship with decent grades at an ivy league school and not have to pay anything then why should they get paid to play sports for their school. 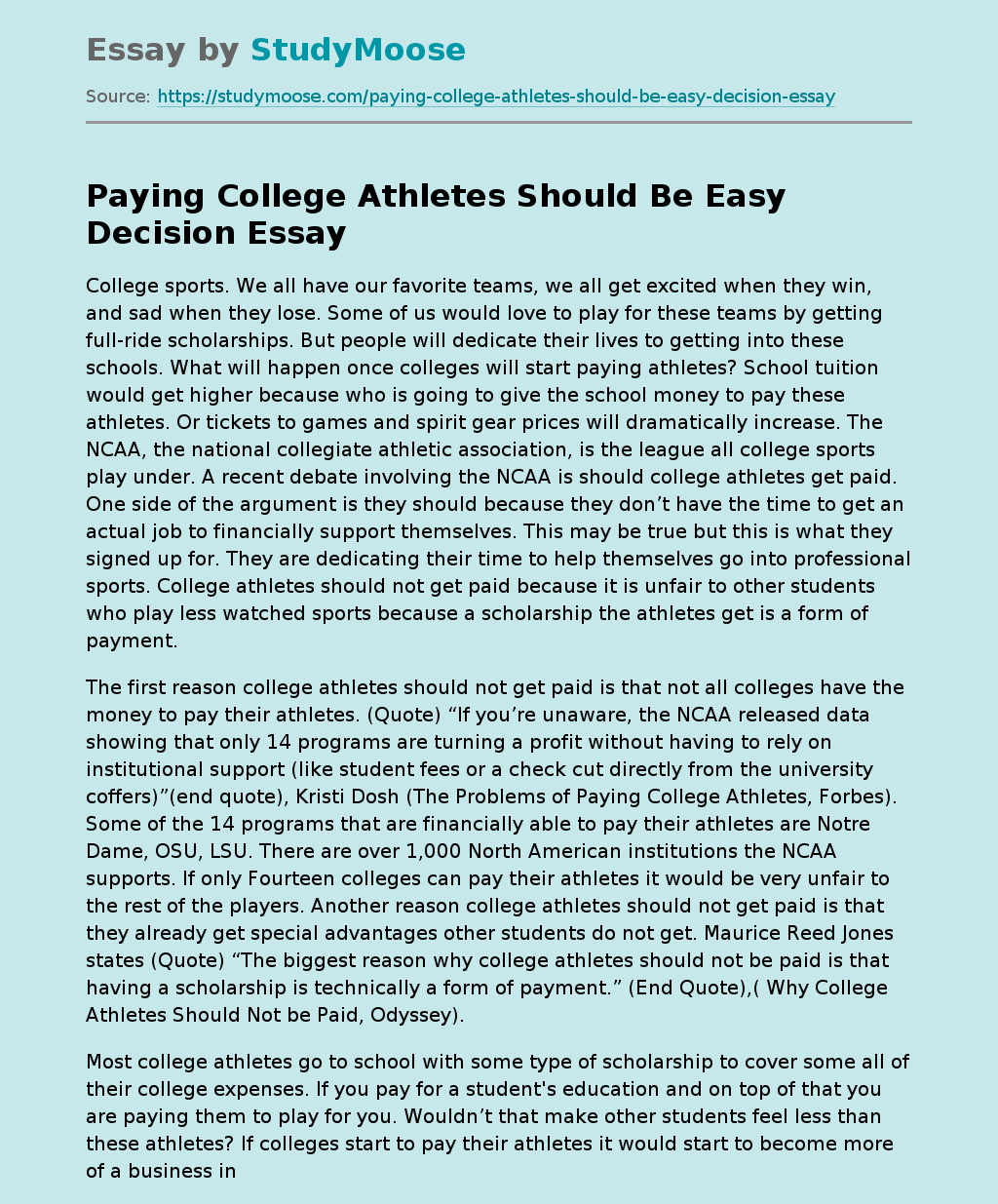