College Athletes Should Get Paid or Not

The debatable topic that is relevant today, is whether or not college athletes should get paid or not. This fact alone would make one question as to why some may wonder what income inequality has to do with college athletes? Could college athletics move up the income ladder by essentially helping low-income kids? From today’s view, most college students will never get a chance or make it in professional sports, and approximately 50 percent never graduated. So what happens to the low-income kids, unknowledgeable athletes who spends years playing for a particular college without receiving any money, an education or a single diploma? Without doubt, don’t pay them but then create an appearance these college athletes are getting highly educated and wheel in billions of dollars for their performances on and off the field.

Don't use plagiarized sources. Get your custom essay on
“ College Athletes Should Get Paid or Not ”
Get custom paper
NEW! smart matching with writer

Could these college athletes potentially see an american dream?

From the world’s point of view, I can understand why there is an argument regarding the amateurs athletes income status.

The world sees it as college athletes get paid by receiving scholarships, but if you look at it from a different aspect, scholarships could change due to an athlete getting injured. Colleges try to get players who they know have the talent to win and pursue them to come to their school by offering them scholarships. What happens to the scholarship given if the athlete gets injured? Then the students are responsible for the college tuition that was not set in place when they started in the beginning.

So it brings them back to square one when the tuition is no longer affordable and chances of them completing their degree decreases. At this point I feel that the college is at risk of losing an athlete they expected to have for the four year agreement and the athlete looking for a more affordable college to complete their education.

In this article, “Should College Athletes Get Paid?” Spencer Bokat-lindell discusses how governor Gavin Newson stated that “Colleges reap billions from student athletes but block them from earning a single dollar”. The National Collegiate Athletic Association continues to argue that college athletes shouldn’t get paid since the scholarship these athletes receive is more than enough. That these athletes alone get in for free, why should they receive more? He explains how “That’s a bankrupt model.” Sharing the support behind these two star basketball players LeBron James and Draymond Green based on the law of their amateur counterparts. Therefore, Mr. McDavis’s Op-Ed arguing that paying student athletes would ruin college sports.

While it may seem odd and unjust to pay college athletes, the reality is that compensation of such athletes is a necessity not only to keep competition at a steady level in college athletics, but also to encourage students to graduate and get their college degrees. The truth of the matter is that many college athletes are already being paid under the table which creates a black-market that is not only illegal, but it is also unfair to universities that abide by NCAA regulations. Universities are exploiting these students and allowing them not to receive any revenue that they clearly earned.

A preposition can be imposed to help on both sides of the world’s view of amateaur and professional athletes. What is even worse is the fact that the coaches of the “amatuer” teams are getting paid for the hard work and effort of the unpaid players. This system is complicated and we must ensure fairness for all players. There is the argument on how much compensation players should receive. It has been suggested that all players have a certain cap that they can earn and it does not change for the player or university which also ensures fairness yet pleases everyone. College sports continue to progress and attract millions of fanatics, the idea of paying these young athletes seem more reasonable considering all the revenue they generate. Why the profits are not going to the hard working athletes, the players don’t see a dime.Why should others keep benefiting from their performances while they get nothing back?

A common issue is this debate is where does the revenue go after these college athletes perform at events? The fairness of the scholarship system, public business that used the image of an athlete, model, actress or any public figure for their own gain would ultimately end up compensating the individual they use. For example, Horace Mitchell and Marc Edelman in their news article, “Should College Student-Athletes Get Paid” discusses not only are the NCAA rules that prevent colleges from paying student-athletes immoral, but they also are likely illegal.
The NCAA member colleges continue to vote to forbid the sharing of revenues with student-athletes. Meanwhile, about five colleges have reported annual revenues that exceed around $100 million dollars. These revenues due come from ticket sales, broadcast rights, and etc. NCAA rules states that student athletes are not allowed to use their likeness for promotional purposes. This means that a well-known athlete can not be charged money for the hours they spend signing autographs but the university is able to use the athlete to generate hundreds of thousands or even millions of dollars through sales and increased enrollment.

In this argumentative article, “Paying College Athletes: Should the National Collegiate Athletic Association (NCAA) pay college athletes?” explains that lawsuits may determine the future status for college athletes. Regarding the right of college athletes to receive payments for the use of their likenesses are ongoing. Not only will this outcome suit those who may dictate the future of the amateur status of these college athletes. Clay travis notes that, “NCAA is being accused of violating their own rules of amateurism, selling the rights to the players that they’re supposed to protect.”

In fact, in order to be eligible to play sports in college you must have an amateur status. Other activities related to playing or coaching a sport may affect your amateur status in college. Athletic scholarships are the biggest reward offered to amateured athletes. Athletic scholarships pay for some or all athletes tuition, including room and board, as long as the athlete is enrolled at the school.Violating the rules based on receiving any compensation for media appearances, accepting any prize money, and receiving any traveling expenses. Amateur athletes are not paid for their athletics performances, they are now allow member athletes to sponsor commercial products so long as the money earned is placed into trust. Professional athletes, by contrast, are typically paid annual salaries plus incentives tied to individual and team performance.

In this article, “Should College Athletes Get Paid?” Elad De Piccioto shares his perspective on how there are at least two sides of a story. Until now, the broadcasts finally discusses that the NCAA recently decided to allow college athletes to financially benefit from their names, images and likeness. Most importantly the NCAA has distinguished between amateurs athletes and potential professional college athletes. Piccioto disagrees that college athletes should not get paid based on young college athletes wouldn’t be equipped to handle so much money that they earned.

Furthermore, on the issue of college athletes getting paid, I personally believe they should. My meaning of being compensated for all their hard work is a monthly stipend or weekly check, not thousands or millions of dollars. All the hard work and dedication they put into their sports and academics are worthy enough. Paying student athletes would provide athletes an incentive to stay in school and complete their degree programs, instead of leaving early for the professional leagues. Based on the revenue they generate college athletes would receive a slice of the pie. Let’s do the right thing and pay them the money they deserve.

College Athletes Should Get Paid or Not. (2020, Oct 13). Retrieved from http://studymoose.com/college-athletes-should-get-paid-or-not-essay 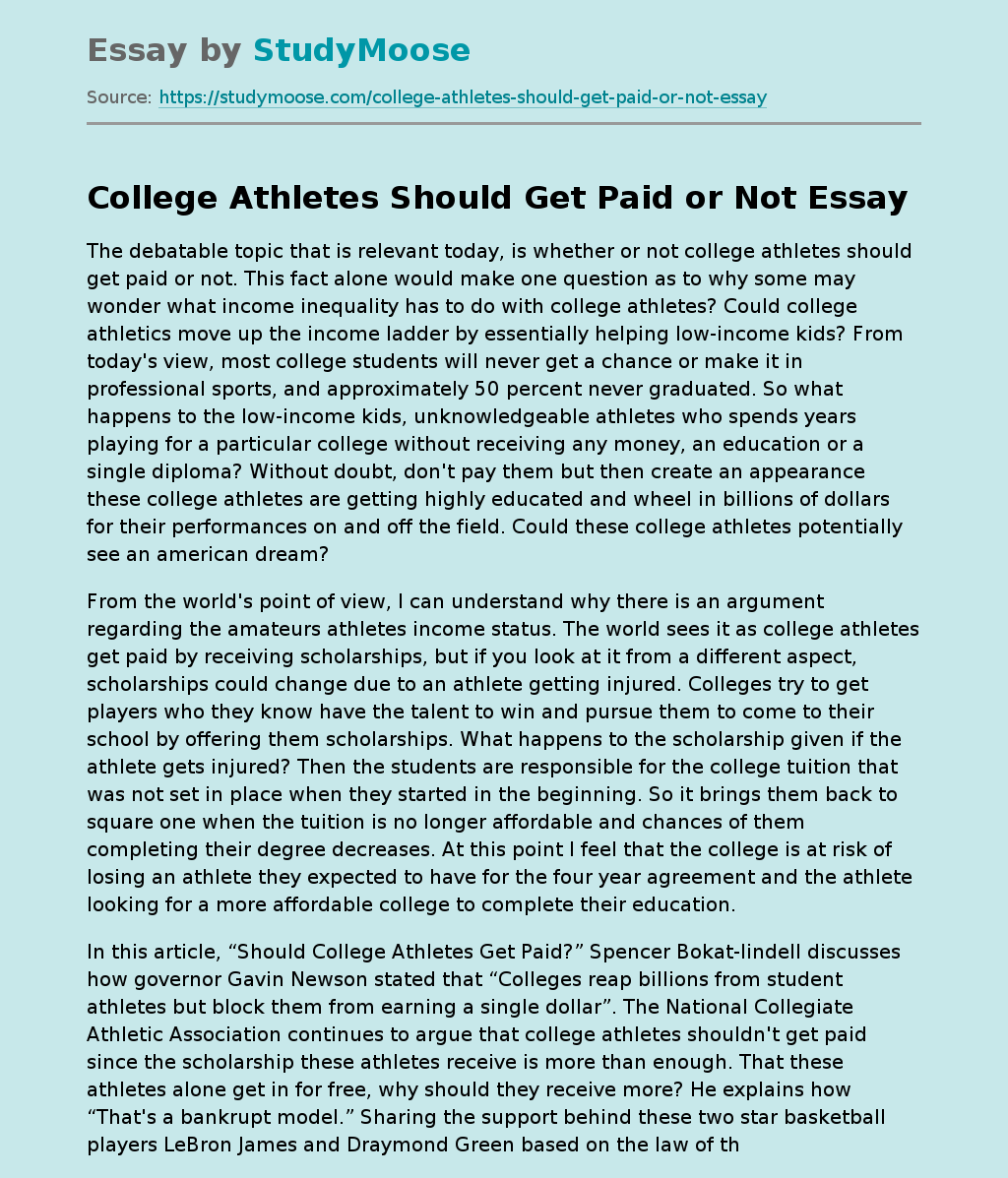