Paul in Bessie Head's "The Collector of Treasures"

The construction of Paul in Bessie Head’s, ” The Collector of Treasures”

The masculinity reconstruction in the post-colonial setting of Bessie Head’s adopted home is among the major elements of her writings. Moreover, the issue regarding the restructuring of models of the African masculinity is obviously, not precise to the short fiction of Bessie Head. This work presents two features of the new masculinity development. Firstly, Head stresses on the phallocentricity connected to this masculinity construction. This feature focusses on the conscious or mental concern regarding the phallus marking the men as the inappropriate recipients of Western male sexuality notions.

Don't use plagiarized sources. Get your custom essay on
“ Paul in Bessie Head’s “The Collector of Treasures” ”
Get custom paper
NEW! smart matching with writer

Based on the western and modern context, the phallus symbolises a power tool. In this context, the phallus becomes a defence with the makings for violating the powerless. The next attribute may pose more threats. Besides, these men have been decentralised to a point of threatening their children.

Paul Thebolo represents the new African masculinity model. Also, he is a different type of man in the community with the ability to construct himself anew.

Paul in the short story is shown to have turned his material and emotional resources towards his loved ones, maintaining his quiet rhythm , thus maintaining a healthy family and occupation life. Furthermore, Paul is the representative of a neighbour and friend to Dikeledi and the caring spouse to Kenalepe.

Dikeledi Mokopi was able to put food on her table because she was skilled at weaving and knitting but her business was inconsistent because at times she would receive numerous orders and somedays none at all .

She often knit dresses for the Thebolo’s but never accepted any money in return, so Paul thought it right to provide her with the basic household goods. The caring and selfless attitude of Paul is also reflected when he accepts the duty of raising Dikeledi’s three children and providing for them after she has been arrested for man-slaughter. The relationship between the Thebolo’s and Dikeledi in the text has been described as being “rich” and “creative” which means they had an extraordinary connection and truly loved each other’s company.

Head emphasises on the need for her nation to turn to the masculinity ideal linked to Paul. Bessie Head presents this feature in the way she creates Paul as almost perfect. He represents all the qualities of what a man is ought to be . Following this further, Garesego and his character match the characteristics of the “current” man in any state. Thus, the author ensures that the readers can accept Garesego’s “reality” and may be hesitant in believing in the goodness of Paul (Goodhead 31). While she is addressing his commendable element by referring to him as the “goodness oasis”, for instance, Enzenwa-Ohaeto may conclude too ideal to be real (Goodhead 31). MacKenzie assumes that Head suggests a solution, rather than being based on social reality. MacKenzie might be unwise in ignoring the detail he has levied a requirement on Head’s role of developing a “saviour” from males in the society (Head 90). The important feature finally is that Bessie Head has a dream of how to reconstruct masculinity.

Critics such as MacKenzie who criticised the author for providing a different African man in Paul has fewer problems believing in Head’s femininity construction linked to Paul’s counterpart and wife, Kenalepe. Head’s key benefits to the postcolonial literature account revolves around her emphasis on marriage as a basis of fruitful constructions of masculinity and femininity. Little importance has been associated with the modest, but rather a supporting proposal by Kenalepe to her friend as well as to her husband. Paul’s idealisation in here is in the idealisation of Kenalepe and in her marriage celebration as a union robust that many readers are set to face (Davis 494).

Kenalepe approaches the topic of sexuality in a way in which she tries to balance her own sexual views with that of her friend Dikeledi. According to Dikeledi, Garesego’s sexual practices are problematic and not sophisticated because she describes them as “jump on and jump off” (Davis 494). In contrary to the views of Dikeledi concerning sexual sophistication, Paul asserts that a man is accountable for sophistication during sexual encounter. According to an analysis carried out by D.H Lawrence concerning male sexual reminiscence, a lady is viewed as an obvious lover while male sexual techniques are natural (Gale 114). The research describes a man’s sexual capabilities as inborn and has to be tender and caring to a woman. Kebonye killed her husband for failing to treat her with care and tenderness. In this context Kenalepe has been fortunate to have Paul as a husband and even confesses she has not been disappointed in that particular part of life.

Dikeledi loves to collect treasures, love, tenderness and gestures. Nonetheless, the last proposal by Kenalepe is so precious that she declines to accept it. When Kenalepe reveals to Paul that she offered to loan him to her friend Dikeledi, Paul laughs off the confession perhaps as a sign of humility for the trust she has on his manhood (Moshenberg 118). Paul’s silence is only understood by Dikeledi who observes that Paul experiences conceit because he is a good man. Dikeledi proceeds to explain that when a person is so in love with someone else, it is difficult to refer to things as immodest. Paul is more than an idealised male because he applauds and values Kenalepe for taking part in the building of his own masculinity (Moshenberg 118). Paul is a good man and he knows it because he is aware that sexual gratification is all about true commitment and tenderness, not nerves excitement as Garesego claimed.

Dikeledi is powerless to stop Garesego from going to bed with her because they are tied by the institution of marriage. Paul’s masculinity renders him susceptible such that Dikeledi finds it easy to miss her fear. As many readers observe, the castration of Garesego was a clear indication that she had planned to take his life . The readers are only subjected to empathy because the wife appears to be abused. However, readers have failed to pay sufficient attention for the investigations carried out by Head in regards to Paul’s figure. For instance, the readers fail to notice that Garesego deliberately refuses to help Dikeledi with paying fees for her son because he wants Dikeledi to ask Paul for his money. He feels that Paul has two homes and Dikeledi is reserved as a spare. Garesego intends to expose Paul for being less of an idealised male. Just like all other fictional and virtuous figures Paul faces a difficult situation. Garesego lays accusations on Paul claiming that Paul has turned out to be the lover of an estranged wife because she supplies her with food. According to Garesego, men can only supply women with food if they want to sleep with them.

Garesego’s perception of masculinity is old fashioned because he is determined to destroy the reputation of Paul in the community because he is jealous of him. However, he faces a lot of challenges as he tries to convince some elderly men in the community that Paul is indeed how he describes him to be. He rules out any possibility of Paul being a good man to discredit the community’s views. However, the reputation of Paul is assumed to be that of a good spouse to some and some people really believe in what Garesego has to offer. During the somewhat later parts Paul becomes the prey of gossip because of Garesego but the readers are always aware of his kind and gentle characteristics.

Paul in Bessie Head's "The Collector of Treasures". (2019, Nov 30). Retrieved from https://studymoose.com/paul-in-bessie-heads-the-collector-of-treasures-essay 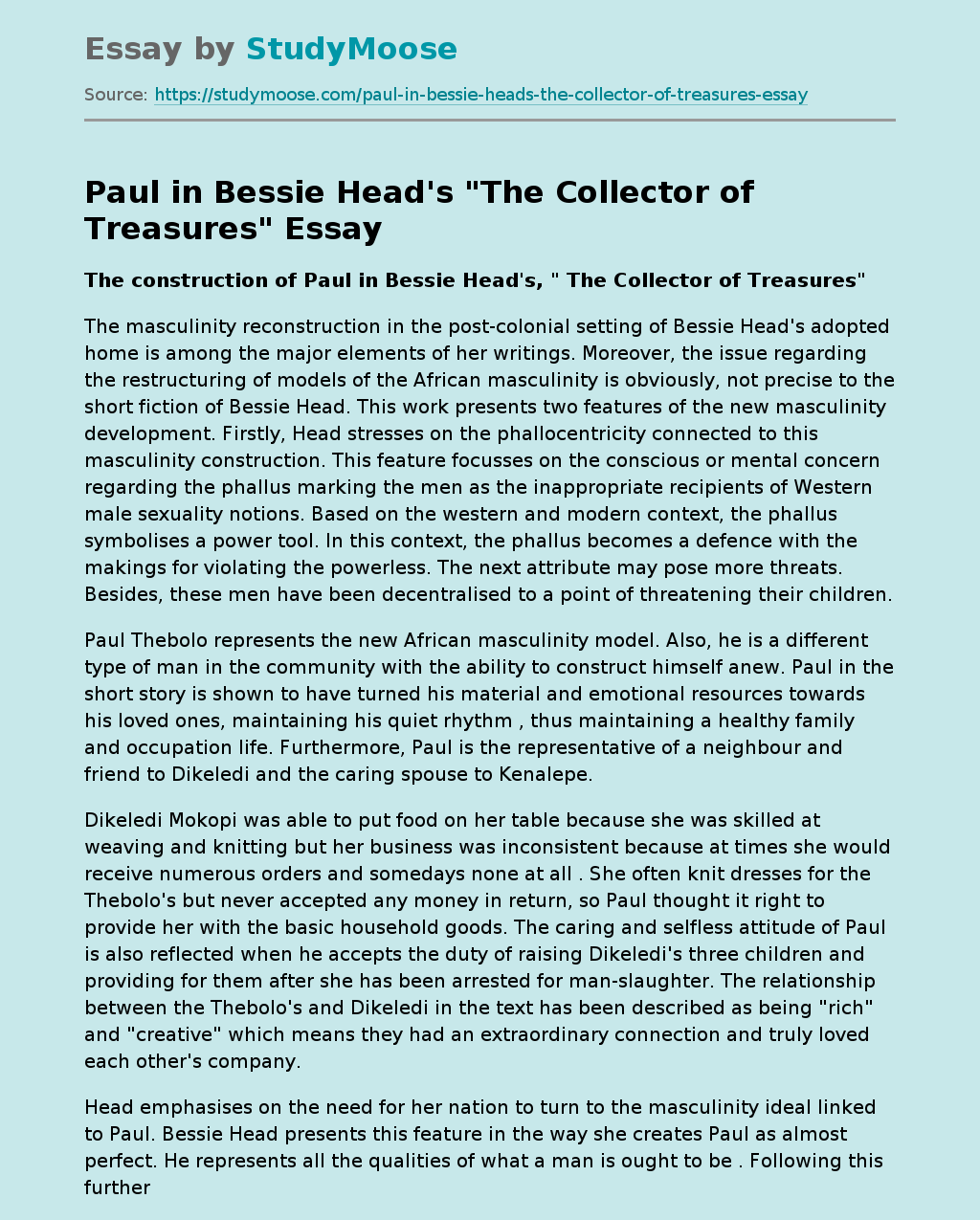