George Safford Parker founded Parker Pen Company in 1892 in Janesville, Wisconsin. It began with the production of his first fountain pen. Afterwards in 1894, Parker had its first major innovation; “the lucky curve” which consisted on reducing the leak caused in fountain pens. Parker’s first marketing approach was to produce high quality pens and make them become status symbols; Parker pens were signer’s favorite, giving the company the first or second position globally.

The company obtained this successful position due to investigations and development by constantly innovating for the production of new products; for instance with the creation of Quink “quick drying ink, they produced the Parker 51; which became a bestseller and was catalogued as “the most perfect pen ever produced”.

Turn in your highest-quality paper
Get a qualified writer to help you with
“ Parker Pen Company ”
Get high-quality paper
NEW! AI matching with writer

It gave the company $400 million within 30 years. By the end of 1980 the parker pens were sold in over 150 countries. In 1987 the company’s headquarters was moved to Newhaven, East Sussex, England. Then in 1993 Parker was aquired by Gillette Company, which already owned the PaperMate brand.

Then in 2000 Gillette sold the company to Newell Rubbermaid, and became the largest in the world owning writing products with brand names such as, Sharpie, Parker, PaperMate, Waterman and Liquid Paper, among others.

James R. Peterson the president and CEO of Parker Pen:

Peterson has to deal with the compay’s problems, for instance instead of having over 40 publishing firms he hired one that could do the job of all. Jack Marks the head of writing instruments advertising

Parker Pen Company faced some difficult years where they were not obtaining as much revenues as expected. Therefore the company hired a new board of marketing directors seeking the implementation of new strategies for the company. The new board, which consisted of highly qualified people, began their campaign by standardizing the products in a centralized system. This centralized system consists of abolishing plurality in the decision-making. The new system they adopted which was a world wide strategy caused the company more than $20 million in looses. Marketers didn’t investigate therefore gave the company a negative image in the market.

Due to the fact that the company was having some issues that was preventing the company to rise up, in 1985 the CEO was fired, moving the company’s new system to a decentralized one. The company is now able to adapt to changes, it is able to adapt to the numerous cultural barriers existing around the world, creating different marketing plans for each nation; with this, Parker regain their image in order to be able to position themselves in the market.

1.The globalization process in the Parker pen company was a failure until major structural changes were implemented by James R. Peterson. Before this change the company had misdirected its efforts to globalize its operations, many key maneuvers were ignored and this led to a close to bankruptcy status which was never in the company’s plans. Basic rules of globalization for any company state that an extensive research of the potential market has to be done, and very thoroughly. investigating the market conditions in not enough, political, legal, social and cultural aspect have to be at the top of the list to ensure that the strategies will b effective and that consumers will respond positively to the strategies implemented. This was one of the things that Parker pens failed to do, they just relied on a weak currency that allowed foreign markets to purchase American-made products, this would only last until the U.S. dollar lost its acquisitive value.

Another reason why their globalization process failed was because they broke another fundamental rule, they didn’t centralize their operation and gave creative and operational autonomy to all of their branches. This caused a great loss of corporate identity and became a big problem at the most critical time since a different solution was to be presented for each one of the subsidiaries.

2.The problem that Parker pen had in its globalization process was spawned form miscalculations or lack of vision in very key areas. The first thing which globalization promoters at the Parker Company underestimated was the strength and impact of the changing market. They never considered that economic and political conditions would vary in such a way that their overseas operations would collapse in such a way. They relied on a very strong dollar which made it easy for foreign costumers to purchase their products, making this their most important income source. By overlooking this important event they drove themselves into an awkward position where they had low sales internally and over autonomous subsidiaries with a large stock and no market share at all.

The other factor that they failed to consider seriously before engaging in such a risky entrepreneurship was the fact that they were living in a time when Chinese massive production was starting to flood the markets with cheaper and more convenient products, at a point where people demanded cheaper product due to a volatile economy and political situation. Their product line depth and width were very impressive with over 400 different product, they had a solid portfolio but nothing to compete directly with the mass produced pens coming from China. They relied on their traditional products and their traditional distribution channels, in which they were losing their entire market share as well.

3.The Parker pen company is one on thousands of examples that can be quoted as being merged with a bigger company; this is an inherent condition of globalization as an economic phenomenon. Like everything else that is involved in globalization, this specific case of being acquired by a bigger company has its upside and its downside. For a company like parker that had a considerably large operation worldwide, the negative things are lesser important than the positive things. The main negative factors that this could have are for example a possible loss of the company´s know how. By having to accommodate to another company’s rules and methods, Parker could have lost its own knowledge of the business, this is a very valuable commodity in the world today and it’s hard to maintain it when a company has to become an active part of another one.

Uniting Parker pens to Gillette and Rubbermaid could also trigger a dangerous situation amongst the employees, changing cities and managers has a very large impact of the moral of the employees since they begin to lose their company identity which is another valuable commodity that companies cannot afford to lose since it is one of the main incentives that the workers have. Identity inside the company is just as important as identity outside it, if a merger like this means that there will be changes implemented in the company´s image it could trigger a loss of costumers or even a major shift in the place that the company has in terms of “top of mind”.

The benefits that this situation could bring upon a company are several and of great importance. In the case of Parker pens, a company with a very important level of recognition worldwide, joining a larger enterprise would imply broadening its market share globally, by having better, bigger and more distribution channels, allowing them to reach new costumers which is a very difficult thing to do in the world today. A big name behind a brand means more resources, this in turn means more research for product development, more advertisement, more promotional strategies, better market research with a finer degree of segmentation and every other activity that would help a company to better it´s self. Another very important thing is the support that Parker pens would have by being part of the Rubbermaid holding, this makes it easier to innovate and take risks, it also transmits a sense of safety to the costumer, they know that being part of the world´s leader in writing instruments does not come easy, so trusting Parker pens is something they can and should do. 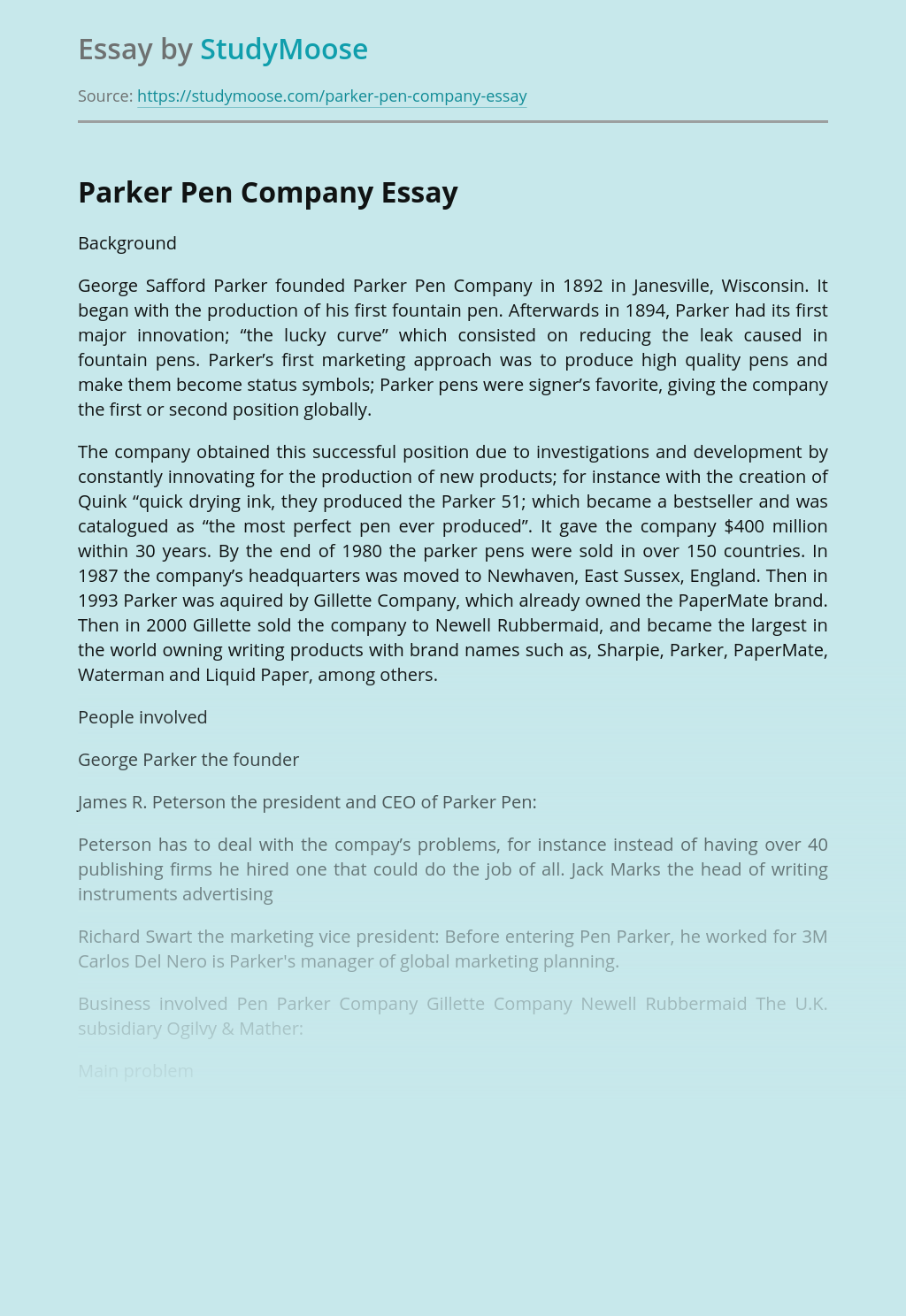 Turn in your highest-quality paper
Get a qualified writer to help you with
“ Parker Pen Company ”
Get high-quality paper
Helping students since 2015
Stay Safe, Stay Original