A patient has entered the hospital and needs urgent attention. The doctors and nurses rush to him and soon realise he is deaf. This is a major problem as the communication cycle is broken, as they can’t understand what the deaf person is trying to say.

A communication cycle involves a kind of a code that has to be translated. You need to work out what the other person behavior really means. Communication is a cycle because when two people communicate they need to check their ideas have been understood.

Don't use plagiarized sources.
Get Your Custom Essay on P2: Discuss Theories of communication Just from $13,9/Page

There are six stages in the communication cycle. All which needs to be complete in order for the nurses and the doctors could be able to treat the deaf patient and that everyone understands each other.

In 1972 he said that interpersonal communication was a skill that had to be learnt, just the way you learn to drive a car .He said that when you are driving a car, you have to change your method to match the conditions of what is happening on the road. Argyle also argued that communication involved much the same ‘cycle’ as driving a car required and to enable the cycle to work successfully, two or more groups/people must be present. In this we have doctors and nurses.

An idea occurs: This is the very first stage of the cycle. Information exists in the mind of the sender. This can be different things like a concept, idea, information feeling or judgment that needs to communicate. Mentally we all have the urge to desperately say what we are thinking. In this scenario, at this stage of the communication cycle, the doctors, nurse and everyone else in this urgent situation would have something they want to say or ask that may help the patient that has just been rushed in.

Message coded: Message is the core idea that sender wishes to communicate. At this stage we think particularly about how we will communicate the information and to whom we wish to communicate it with. We tend to think through how were going to communicate what we are thinking and begin to put your thought into language. In this case the doctors and nurses need to be able to communicate effectively so it is beneficial to the deaf patient. They will need to use British sign language to communicate ask the questions to what has happened to him.

It would be less likely that a one of the staff will know how to sign, so they are will need to bring an interpreter to help everyone with the situation. In this stage of the cycle (message coded) the doctors and nurses have 2 types of people they need to talk to; the interpreter and the patient .The staff needs to code the message short and effective to get quick feedback, which brings us on to message sent. Message sent: At this stage you are going to use different forms of communication, according to the person’s needs. Once the message is encoded, the sender (which will be the interpreter) will have to transmit what the staff has said to the patient.

Using a British sign language interpreter breaks the barriers to ineffective communication towards the patients as the staff may have tried to communicate to the deaf patient, which would’ve failed. But at this stage it is better off not having an interpreter who knows the patient or is a family member because they may be against them or with them (biased). It would definitely be beneficial to get an interpreter who doesn’t know the patient who needs treatment and to the staff as they need to collect information, so they are able to assess what is going on with patient.

The deaf patient may have a friend or a family member with them who could fill in any information about the patient or about what may have caused the injury. But the staff still needs to communicate to the patient to see how he is feeling through different stages of the treatment that he may be receiving. During this final stage, a few nonverbal communications could be used to help improve messages being sent to the staff .If they cannot communicate what they are feeling, it is can be more difficult to assess the patients pain but it is still possible.

You can also look at any physical signs like body language, hand gestures and facial expressions. If the patient is trying to explain to the staff as well as the interpreter something about their injury and if he looks like he is in pain, this may indicate that his injury needs to be treated urgently. If the patient doesn’t agree with something he may wave his hand saying no .i.e. Automatiaclly, if the patient comes in to the hospital with their hands supporting their arm this could give a little hint that there may be something wrong with their arm.

Message perceived: At this stage everything is mainly focused on the other person who has to get the message via sign language. The Deaf patient should have got the message quick and effectively. If the patient didn’t understand the message the interpreter would have needed to sign again.

Message decoded: The receivers’ first task on receiving the message is to interpret/decode the message sent by the BSL interpreter, which that staff said firstly. This could be difficult as the staff may make assumptions to how the patient reacts with what they’ve been asked when the staff could be noticing body language and facial reactions Message understood:

This is the final stage of the communication cycle when the message so understood and the staff have been able to communicate effectively. Not always message are understood and if the deaf patient did understand what the staff have asked he will be able to sign back to the interpreter which then the interpreter should be able to translate back verbally about what the patient has said.
Scenario 2:

This model was first developed by Bruce Tuckman in 1965.Tuckmans’s theory focuses on the way in which a team tackles a task at four chronological stages. Forming: Forming involves group members coming together and asking basic questions about the purpose and aims of the groups.

In this first stage of the group development, members tend to feel quite anxious usually at this moment someone from the group will come out as the leader. Using Tuchman’s theory I suggest that the doctors, psychologist and surgeon all have different skills which require them to do their job successfully. Usually a leader must be prepared to answer questions and everyone would start to ask about the team’s purpose, objectives and external relationships. Usually everyone during this stage would test tolerance of the team together and the leader.

This then would lead to storming were usually everyone break out. Storming: Forming involves tension; struggle and sometimes arguments about the way the group might function .Power and control are the main issues during storming phase. Without tolerance and patient, the team will fail, at this stage. Once they’ve finally settled down, co-operation between members of the group should begin to develop towards the end of this phase. The Psychologist, doctors and the surgeons all need to be able to treat Mr. Jones without causing any delay. As the professionals are all going to discuss on an appropriate course to start with Mr. Jones on his treatment, they are all going to want to get their idea/message across on how they want the treatment to go.

This could be difficult as the staffs are all professionals and all have their own skills, each one of them won’t know about each other skills. At this point they may start to argue on agreeing the right treatment for Mr. Jones. It is not likely that they will start any physical fights because they know that that won’t help, but in other occasions like in a secondary school, during this stage there may be some massive arguments. They should be able to settle down by the end of this stage but still wanting a bit of power.

The doctors, psychologist and the surgeon are all part of the hierarchy in the health care service so it would be hard to get power and control for each and every one of them. Norming: In stage 3, the group will begins to come together. The group’s responsibility or tasks have been clearing defined and agreed upon. Now past their arguments, each member of staff would now understand each other and have a certain amount of appreciations for each other’s skills, as they all have different skills because they all have different professional. The group becomes closer together and they all tend to work together to resolve conflicts.

The doctors, surgeon and the psychologists must by now have known each other’s skills from ‘storming’ (stage 2)and as they know now each other’s skills each of the professionals, would’ve talked about when would be appropriate to do the surgery, therapy and when to start the medication for Mr. Jones as soon as possible. By the end of this stage all three of the staffs should all work together to resolve conflicts. Performing: This is the final stage of the group communication cycle.

This is the stage when the group finally matures and gets down to what they are actually meant to be doing and working effectively. Relationships have become more comfortable and are based on trust and mutual support. Each of the staff should now know what they’ve all got to do. They should all work together if they want to treat Mr. Jones without any causing delay. From the past 3 stages, they’ve should by now not feel anxious or worried.

P2: Discuss Theories of communication. (2016, May 22). Retrieved from https://studymoose.com/p2-discuss-theories-of-communication-essay 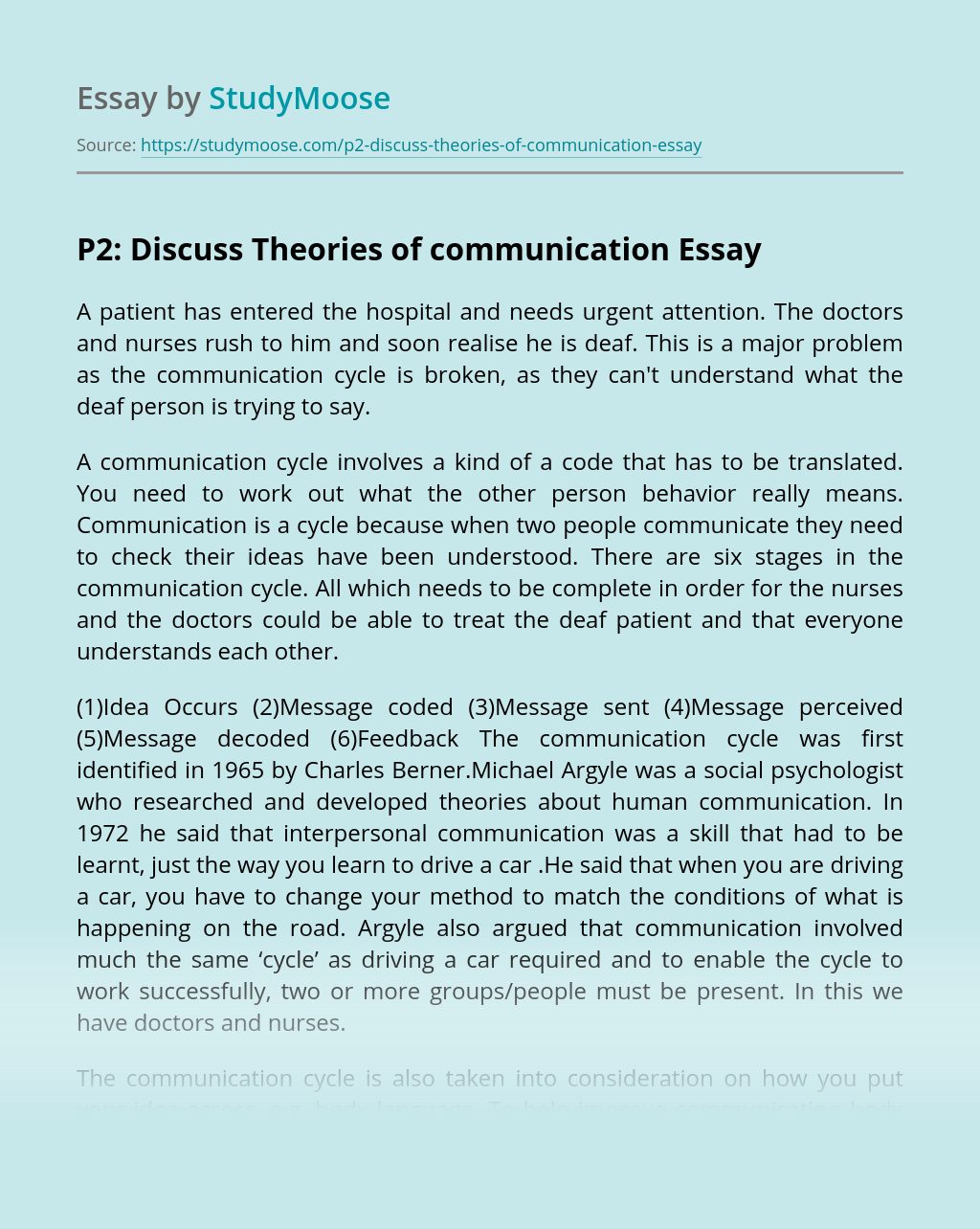