The story Frankestein by Mary Shelley is a gothic and medival time period book about a man named Victor Frankestein. Throughout the beginninging of the book, Victor excludes himself from the rest of the society to focus on his dream, Chemistry. His curisoity and ambiton for life drove him to create somethng that no human had seen before. For months he gathered strange limbs from local gravesites, assembled them, and eventually brought back a life of a strange creature. Right away, Victor realized the mistake he had made an abandoned the creature selfishy leaving him alone and confused not knowing what to do.

Don't use plagiarized sources. Get your custom essay on
“ Accceptance in “Frankestein” ”
Get custom paper
NEW! smart matching with writer

With no family, love, or acceptance, the monster is cast out into the world which judges him on his hideous lookd. He has no one to learn from or look to for advice. The domestic void in the creature’s life creates a barrier between him and the rest of civilization.

The story about Frankenstein deals with pride that causes destruction on one’s self.

“A new species would bless me as its creator and source; many happy and excellent natures would owe their being to me (pg 57).” One of the many themes in Mary Shelley’s Frankenstein is appearance and the importance of acceptance in society. In the society of frankestein and of today, people judge one often on their looks. Whether its the color of someone’s skin, the clothes that a person wears, or facial features that one has. Human beings want to be accepted in society for their mental and physical abilities.

If a person is not accepted by their society, he or she can become an outcast like the monster in Frankenstein.

The monster seeks acceptance immediately upon getting his life. “Unable to endure the aspect of the being I had created, I rushed out of the room and continued a long time traversing my bedroom chamber, unable to compose my mind to sleep.”(pg 58) This quote portrays that Victor, the monster’s creator will not look at him for his appearance is just too unbearable. Sadly because the monster is not a normal human being, the monster has no family and absolutely zero acceptance. When the monster sees the family in the cottage for the first time, he wants to learn the language to communnicate and learn family values like a human being. After he gets rejected, the monster demands help from Frankenstein to create a female, someone that the monster could be with in this lonely world. Not only does he suffer the prejudice of an appearance based society, but other characters and situations in the novel force the reader to reflect their own crimes.

In the story you come across several instances of social prejudice that include the isolation and outcast of Frankenstein’s creation. “I escaped, and rushed dwnstairs, I took refuge in the courtyard belongnng to the house which I inhabiated.”(pg 47) Here is the first real example of Victor abandoing the creature from day one. Not only is Victor’s quest selfish, but his goal is lighthearted as well. Victor’s first impression of his creature was disappointment. He describes his supposed failure as a monster when he says, “His yellow skin scarcely covered the work of muscles and arteries beneath; his hair was of lustrous black, and flowing his teeth of pearly whiteness; but these luxuriance’s only form a more horrid contrast with his watery eyes, that seemed almost of the same colour as the dun-white sockets in which they were set, his shriveled complexion and straight black lips.”(pg 56) Even though the monster was shunned, labeled a killer, and cursed by his own maker, he ends up wanting to learn more about the human race.

He describes the community as, “miraculous,” (pg 102) and sacrifices his own hunger by refusing to steal from the poor villagers. But when the creatures emotions took over and he tried to approach the villagers, they reacted in an frenzy. “The children shrieked, and one of the women fainted.” (pg102) The cottagers didnt accept the monster because of his looks and his deminorism. Even after he treid to approach them. Sadly because of how the cottages reacted towards him, the creature’s deformity took an effect on his own state of mind. “Alas! I did not entirely know the fatal effects of this miserable infirmity.”(pg 110) Thecreatures physical attributes and looks are so different to the others, the creature sees the cottagers as “superior beings” (pg 111) and believes that they would be disgusted by his unusual deminorism and unusual word’s .

One of the last themes in Frankenstein is racism. This is shown from the very first moments of the creatures life. One of the first things Victor says about his creation is that, “His yellow skin scarcely covered the work of muscles and arteries beneath.” (pg 42) He viewed his creation with “breathless horror and disgust…”. (pg 42)Here one finds that like the vast majority of people then and today, Victor notices the color of his creatures skin first and doesnt even try to connect with the monster at all.

The universal quest for acceptance has led many humans to violent and indecent acts. Throughout the entrie story, the creature undergoes 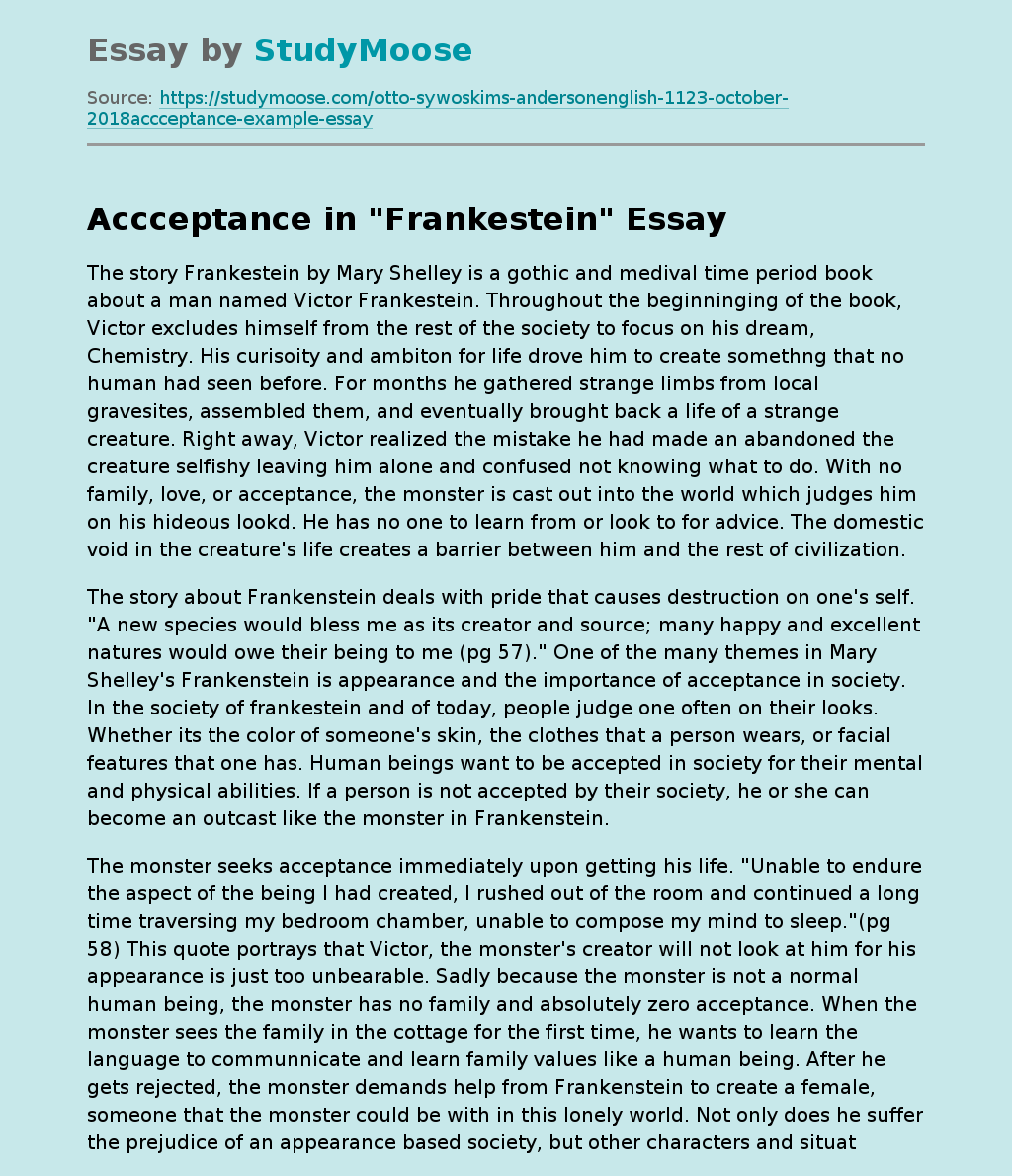