Turn in your highest-quality paper
Get a qualified writer to help you with
“ Organizational metaphor ”
Get high-quality paper
NEW! AI matching with writer

The first metaphor that he proposed, allowed us to understand the organizations as machines. Since Descartes the metaphor of the machine has entered the scientific thought. This philosopher say the human body is liked to a later machine. Then the industrial revolution take this philosophy as part of the shift. Later Gareth Morgan sense that organizations are like machines, its means they require high levels of efficiency in the same way as the machines require high levels of efficiency to operate correctly.

The second one is organization as an organism. The comparison of the organization with an organization concept from biology, aims to underline the dynamic character of the former, subject to constant change.

These changes take on a vital aspect for survival and effectiveness. Consequently, the employees have needs that must be satisfied for them to function well. According to the population ecology view, some organisations depend on resources to survive for which they have to compete with other organisations. Unlike what we observed in the metaphor of the machine, which highlights here is not a static, controlled, focusing on their physical structure.

Organizations as a cultures.
Culture (kʌltʃər) from Latin: cultura, cultivation. When we are talking about culture, we are concerning for the developing models, reproduced in a society model, formed by knowledge, ideologies values and laws. Comparable to the society, the organizations are affected by the rules and ethics codes, appropriated for all situations. These facts were named by Representation and agreement.

Organization as autocracy (Political system)
In a system that rewards progressing, and punishes the faults; employees are encouraged to hide the failures of the system to protect themselves “letting sleeping dogs lie” and saying bosses exactly what they want to hear. The only freedom they have is the option to quit and move on. Conflict occurs when there are opposing interests and is probably always present in all organisations. The political view of organisation shows that politics is inevitable in organisations and all organisational activity is based on self-interest. It explodes the myth that organisations are rational, it helps to find ways to overcome the limitations of the notion that organisations are integrated systems, and it gets us to recognise socio-political implications of different organisations and their roles in society. The danger of this view is that it can increase the politicisation of organisations. (anonymous, 2014)

Organizations as psychic prisons.
Nominalism may refer to a position that denies the existence of universal entities or objects, but accepts that particular objects or entities exist. Plato conceives a man with a dual reality, body and soul, which considers the idea of ​​the material and the immaterial or spiritual as opposites. The model of psychic prison metaphor is used to examine some of the ways organizations and their member’s become trapped by constructions of reality that give an important understanding about the world.

Instruments of domination.
These kind of organizations used the staff for their own purposes.

So ¿What do we know about the organizational metaphors?
(Morgan, 1980). Metaphor plays a symbolic role, for the organizational analysis, just like that, creates a set of meanings essential for the process of human appreciation, social, psychological and cultural. 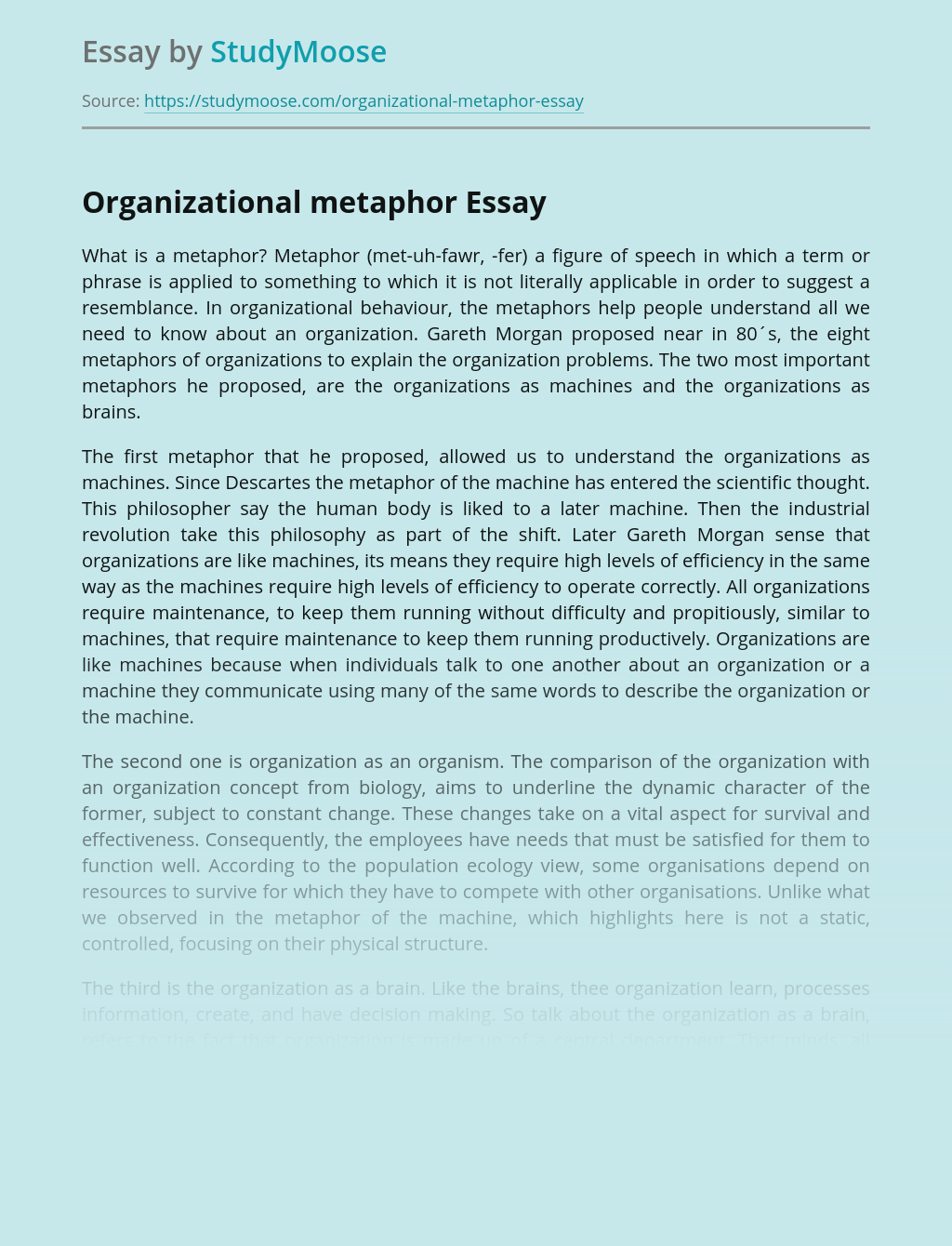 Turn in your highest-quality paper
Get a qualified writer to help you with
“ Organizational metaphor ”
Get high-quality paper
Helping students since 2015
Stay Safe, Stay Original