Few issues influence organisational outcomes more than culture. Shaping members behaviour, beliefs and values, the internal culture of an organisation is a powerful tool, one effective leaders capitalise on to achieve competitive advantage. This essay argues that leadership is a crucial element of strong internal culture, in turn supporting an inclusive and multicultural organisation. To discuss this proposition, the approach taken is both theoretical and observational, comprising three sections. First, ‘Observable culture, core values and a preparatory view of diversity management’.

One, the behaviour of employees within the workplace. Two, the manner in which members learn throughout the organisations evolution and three, the imported assumptions, beliefs and values of new members and leaders. Leadership has been described as a fundamental element of strong internal culture (Schein, 2010), therefore, the strength of the internal culture is a reflection of the organisations leadership (Schermerhorn et al.

, 2014). As an example of self-fulfilling prophesy (Schermerhorn et al., 2014), leadership governs whether internal culture is either an asset to an organisation, or a liability (Chatman & Cha, 2003). Strong organisational cultures are inclusive and cohesive, interconnecting employees with shared values and beliefs. Furthermore, a strong culture is one where managers actively communicate organisational objectives to members and the organisational strategy is closely aligned to those same objectives (Deal & Kennedy, as cited in Ross, 2000).

Commonly, internal culture evolves due to the attitudes of the organisations founders or leaders (Schein, 2010), thereby highlighting the fundamental importance of leadership to the development of strong internal culture. Astute leaders recognise any dysfunctional elements of culture and implement change initiatives (Schein, 2010), in turn guiding the organisation towards increased performance and sustainable competitive advantage (Chatman & Cha, 2003). Achievement of strong internal culture and competitive advantage is gained when managers incorporate a three pronged approach. First, by establishing shared values and beliefs. Second, by ensuring operating procedures are aligned with established principles and finally, by demonstrating commitment towards the individuals and teams within the internal environment, for example, members, customers and stakeholders (Schermerhorn et al., 2014; Ross, 2000). While organisational culture can be explored on many different levels (Schein, 1984), most commonly, it is described on two levels, ‘observable’ culture and ‘core’ culture (Schermerhorn et al., 2014). Schein (1984) describes observable culture as ‘how’ the environment was created and ‘what’ behaviour is displayed amongst members.

Observable culture is visible, what can physically be seen and heard within the environment, for example, the office layout, manner of dress and style of communication. It is through strong observable culture that the organisations values and beliefs are reinforced to existing members and learnt by new members (Schermerhorn et al., 2014). The observable culture is reflected in the customs of its members, including stories, heroes, symbols and rites and rituals (Schermerhorn et al., 2014). First, stories serve to communicate and reinforce culture by illustrating an account of organisational life (Karathanos, 1998). A positive connection has been shown linking organisational commitment to the number and type of stories told. (Wilkins, as cited in Karathanos, 1998). Second, heroes are people both past and present who display core organisational values, in turn, reinforcing the organisations values and providing a benchmark for expected performance. Third, symbols characterise actions, for example, shaking hands and language specific to the organisation (Karathanos, 1998). Lastly, rites and rituals describe events such as Christmas parties, award ceremonies and regular meetings.

The rites and rituals within an organisation reinforce connectedness between members (Schein, 2010). A symbolic manager is one who integrates these four elements of observable culture into their leadership, in turn encouraging others to do so (Schermerhorn et al., 2014). While observable culture describes the ‘how’ and ‘what’ behind internal culture, the underpinning rationality is more elusive, that is ‘why’ members behave the way they do (Schein, 1998, p. 3). To understand why individuals and groups display certain characteristics, it is necessary for managers to look at the “second and deeper level of culture” known as core culture. (Schermerhorn et al., 2014, p. 67). The core values of an organisation extend beyond the beliefs or ‘norms’ of an organisation to incorporate underlying assumptions, or “taken-for-granted qualities” (Schein, 1984, p. 3).

However, how do managers implement change initiatives when “one subculture is in ‘majority’ status while others become ‘minorities’ in respect to representation within the organisation” (Schermerhorn et al., 2014, p. 76)? To answer this question, an historical view of Equal Opportunity (EO) is required (Moss, 2010). Equal Opportunity polices were introduced in the 1960’s and 1970’s (Kirton & Green, as cited in Moss, 2010). Then, in the 1980’s, as part of “expanding equal opportunity laws and heightened concerns over discrimination litigation”, diversity management initiatives emerged (Dobbin; Kelly & Dobbin., as cited in Roscigno, Wilson, & Berrey, 2014, p. 349). The basis of equality policies centred on legal compliance and equality based on the assumption of sameness (Gagnon & Cornelius, 2000). According to Alvesson and Billing (as cited in Moss, 2010, p. 4), this mindset established acceptance that “white, non-disabled, heterosexual men’s experiences and interpretations of organisational life were universally applicable”. While minority groups and women have made advancements into professional positions, they continue to remain largely underrepresented compared to male colleagues (Tomaskovic-Devey & Stainback as cited in Roscigno, Wilson, & Berrey, 2014, p. 349).

In response to increased culturally diverse consumers, managers must ensure the organisation delivers a more diverse work force (Allen, Dawson, Wheatley, White, 2008). Incorporating the differing views of members ensures better decision making and creative problem solving is expedited (Schermerhorn et al., 2014), in turn, organisations “respond to its customers or other stakeholders with more creative and innovative products and solutions” (Gardenswartz, Cherbosque, & Rowe, 2010, p. 74). Adapting to diversity in this manner maintains a continued commitment to “total quality management” (Schermerhorn et al., 2014, p. 71), presenting the organisation with a significant competitive advantage. To capitalise on the competitive advantage created by diversity, leaders are urged to create multicultural organisations. A multicultural organisation is one of three organisation types, each “with varied implications for diversity”, (Msibi, 2011, p. 170).

In support of an organisations move towards multiculturalism, Cox (1991) provides six strategies. One, establish pluralism, where cultural identities, values and behaviours are maintained in accordance with legal compliance. Two, ensure any connection between minority culture members and job status is eliminated. Three, provide assistance with career development through mentoring and support groups. Four, eliminate cultural bias, specifically discrimination and prejudice. Five, ensure members personally identify with and define themselves as members of the organisation, and six, eliminate conflicts between minority and majority members.

In support of these six strategies, Roosevelt (2011) discusses four strategic elements required for the development and implementation of a diversity management plan. First, understand the context of diversity. Second, effectively plan for diversity management. Third, strategically implement the diversity plan and finally, effectively implement the diversity plan. Critical reflection of multiculturalism and leadership in a known organisation This section examines my own observations of multiculturalism in a known organisation. I will discuss my current workplace, where my position is Human Resource and Compliance Manager. I will argue that management has historically failed to influence multiculturalism, however presently, change initiatives are occurring. The organisation is a Defence contractor. While the organisation is civilian, 43% of members are ex-military, including 30% of management.

Therefore, the military psyche is indoctrinated into the organisations culture. The organisation has historically been monolithic in its operations, characterised by high levels of white males and low levels of women and culturally diverse individuals within management roles (Cox, 1991). Recruitment and selection is one example where management has failed to influence multiculturalism. Historically, recruitment has fostered the “similarity-attraction effect” (Chatman & Cha, 2003, p. 26). To illustrate this point, 92% of members are male, 4% of members are culturally diverse and 2% of females hold management positions. Lack of inclusiveness is another example where management has failed to influence multiculturalism. With almost zero “structural integration” and medium to high levels of “intergroup conflict” (Schermerhorn et al., 2014, p. 74), member identity is closely aligned to past rank or current position title.

For example, ex-military members impose bias over other ex-military members based on previous rank, and non ex-military members have expressed reluctance to apply for promotional positions. Since February 2014, a ‘culture survey’ project has been underway. The objective is to measure cultural attitudes in a move towards multiculturalism. The methods used have been inclusive. A “quality circle” was formed (Schermerhorn et al., 2014, p. 72), although we called it a ‘survey consultative committee’. The committee consisted of 16 volunteer members who autonomously developed the survey. Once survey results are codified, approximately mid June 2014, an additional committee will form to make recommendations on appropriate change initiatives – it is a bottom up approach to management (Schermerhorn et al., 2014). While I have encountered resistance to this “change leadership” (Schermerhorn et al., 2014, p. 440) from my peers within the management group, the initiative has been well received by other staff. 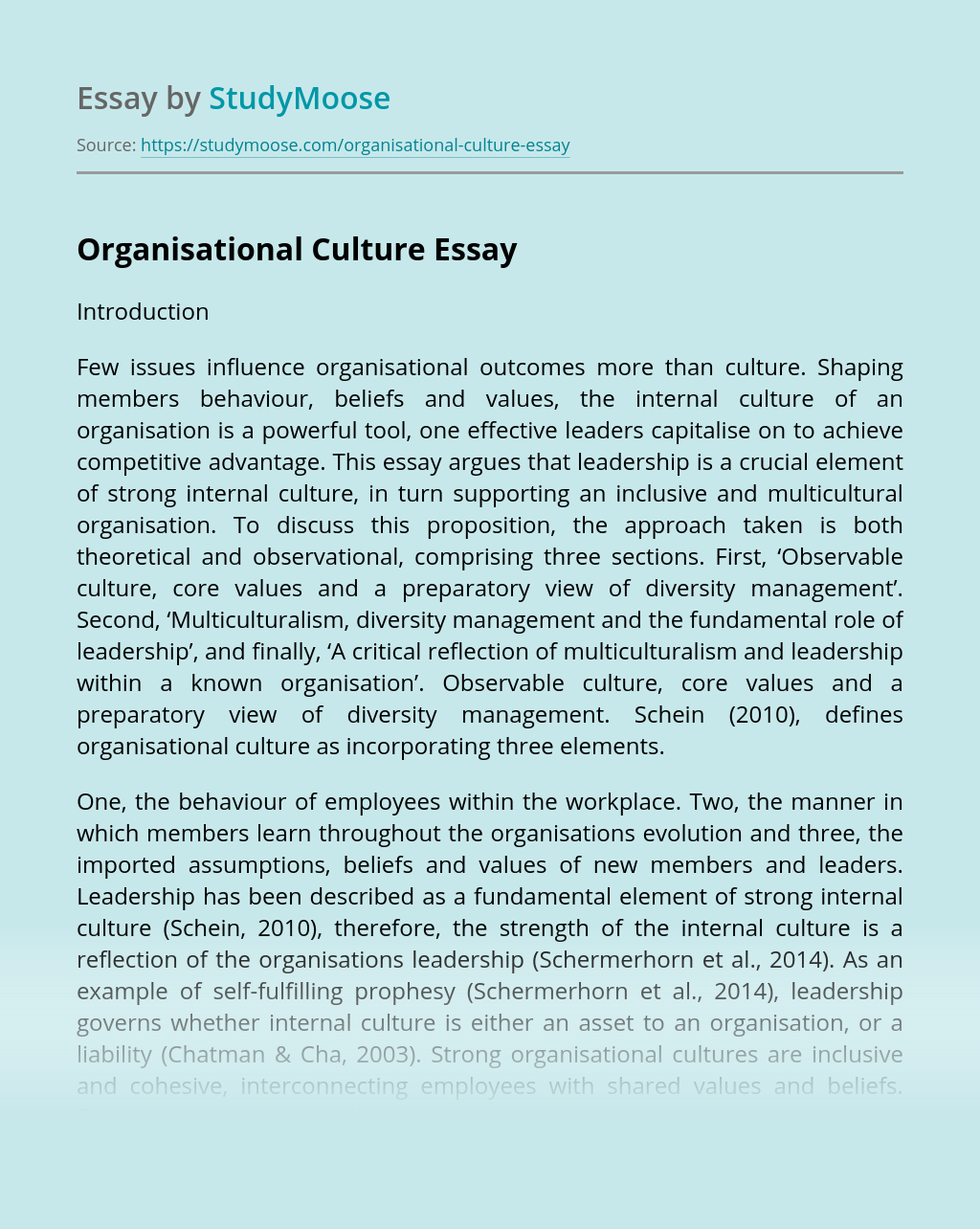