INTRODUCTION
Recrystallization is the primary method for purifying solid organic compounds. Compounds obtained from natural sources or from reaction mixtures almost always contain impurities. The impurities may include some combination of insoluble, soluble, and colored impurities. To obtain a pure compound, these impurities must be removed. Each is removed in a separate step in the recrystallization procedure. [8]

The said impurities of the crude acetanilide were removed using activated charcoal, filtration and recrystallization.

EXPERIMENTAL
A. Compounds tested
Aniline
Aniline is a clear to slightly yellow liquid with a characteristic odor. It does not readily evaporate at room temperature. Aniline is slightly soluble
in water and mixes readily with most organic solvents. Aniline is used to make a wide variety of products such as polyurethane foam, agricultural chemicals, synthetic dyes, antioxidants, stabilizers for the rubber industry, herbicides, varnishes and explosives.

(b)
Figure 1. (a) Hydrogenation of nitrobenzene (b) Bechamp reduction

Acetic anhydride
Acetic anhydride is clear, colorless liquid with a strong, pungent, sour vinegar-like odor, lachrymator. [5] Acetic anhydride is an important solvent and acetylation agent. [4] It is used in the manufacture of acetyl compound, cellulose acetates, acetylizer and solvent in examining wool fat, glycerol, fatty and volatile oils, resins, detection of rosin, in organic synthesis, such as dehydrating agent in nitrations, sulfonations and other reactions where removal of water is necessary.

[5] Acetic anhydride is prepared by the carbonylation of methyl acetate. There is a two-stage process for the preparation of acetic anhydride, in which, in a first step, methyl bromide or, preferably, iodide is carbonylated to provide the corresponding acetyl halide, such acetyl halide in turn being reacted with methyl acetate, in a second step, to provide acetic anhydride, which corresponds to the following reaction scheme, in the event that methyl iodide is the starting material: [7] Step 1:

B. Procedure
1. Choosing the Recrystallizing Solvent
A corn-grain amount of pure acetanilide was placed into each of three test tubes. Methanol, hexane, and water were added to each test tube respectively. Each was shaken and was placed in a warm bath (37oC-40oC) for 1-5 minutes and then was cooled.

2. Acetylation of Aniline by Acetic Anhydride

Aniline solution was made by mixing 2mL of aniline with 20mL of distilled water. 3mL of acetic anhydride was then added to the solution to form acetylation. The over-all solution was then placed in an ice bath to form crystals of crude acetanilide.

Figure 4. 2mL of aniline mixed with 20mL of distilled water

Figure 5. 3mL of acetic anhydride added to the aniline solution

The crude acetanilide crystals were filtered through a wet filter paper. The residue was then dried and weighed. In a separate Erlenmeyer flask, the crude acetanilide residue was placed and 20mL of the recrystallizing solvent was added. The solution was then heated on a hot plate until the entire solid dissolved completely. When the solution became colored, it was removed from the heat and enough amount of activated charcoal was added. The heating process continued until the solution became colorless. While the solution was still hot, it was quickly filtered using a fluted filter paper. Its filtrate was then cooled by placing the receiver in a beaker with cold water. The crystals that formed were collected and were washed. When the
crystals completely dried up, it was then weighed.

Figure 9. Heating process of the solution

Figure 10. Addition of the activated charcoal to the solution

Figure 11. Continued heating process of the solution until colorless

Figure 12. Filtration and recrystallization of the acetanilide

∴ Aniline is the limiting reagent. 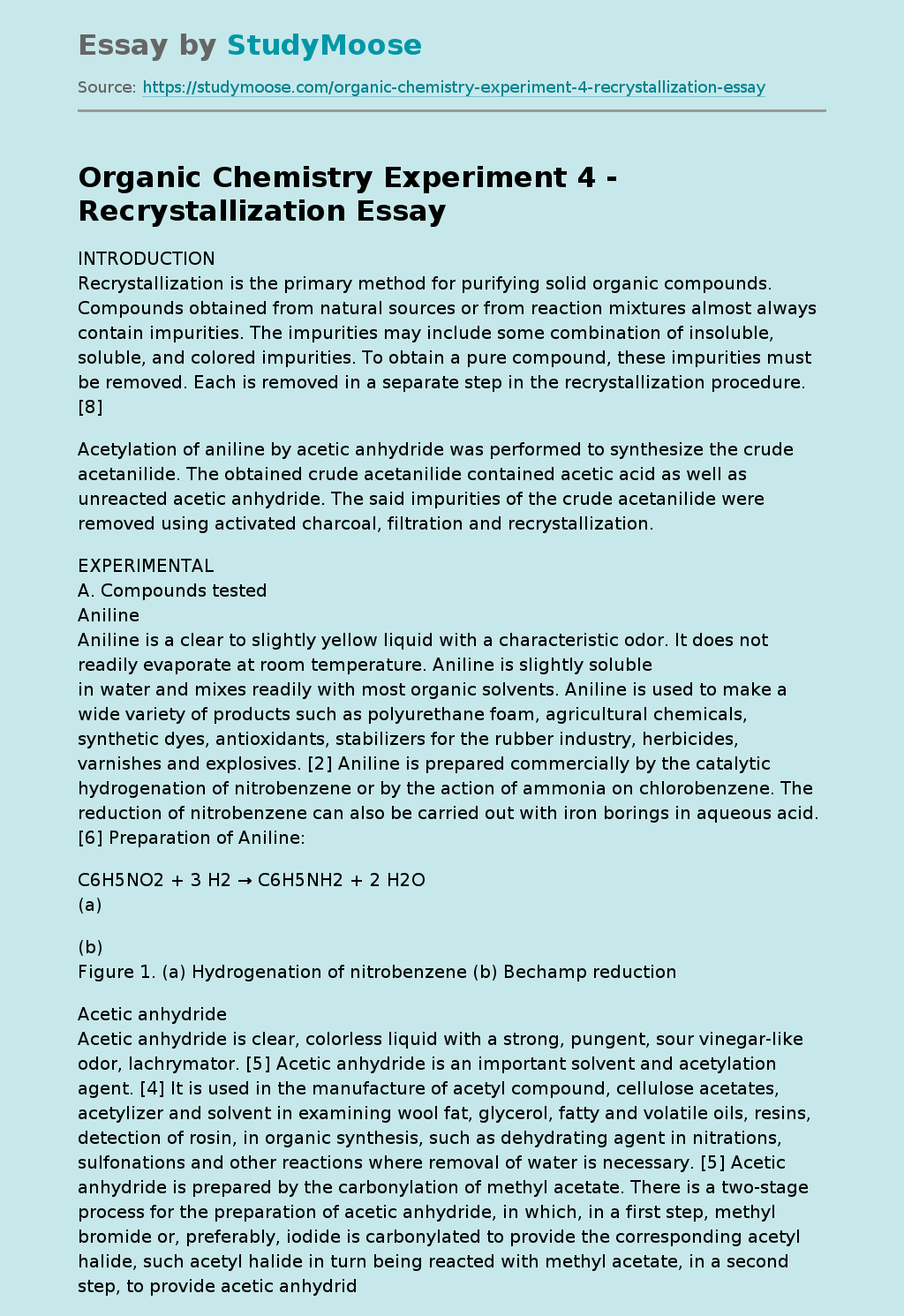